In Philippians 2, St Paul tells us that “At the name of Jesus every knee should bow, of things in heaven and things in earth, and things under the earth and every tongue should confess that Jesus Christ is Lord.”   From the earliest days of Christianity, Christians have known the great power of Jesus’ Holy Name.   As the once-popular hymn commanded:

All hail the pow’r of Jesus’ Name!
Let angels prostrate fall;
Bring forth the royal diadem,
And crown Him Lord of all.

Small wonder, then, that the Church sets aside the first month of the year in honour of the Holy Name of Jesus. hrough this devotion, the Church reminds us of the power of Christ’s Name and encourages us to pray in His Name.  In our society, of course, we hear His Name uttered quite often but all too frequently, it is used in a curse or blasphemy.  In the past, Christians would often make the Sign of the Cross when they heard Christ’s Name uttered in such a manner and that’s a practice that would be worthwhile to revive.

What has happened to the tradition of honouring the Holy Name of Jesus?

By way of concretising respect for the name of Jesus in a formal way the Second Council of Lyons in 1274 decreed that “at the name of Jesus every knee should bow; whenever that glorious name is recalled, especially during the sacred mysteries of the Mass, everyone should bow the knees of his heart, which he can do even by a bow of his head”.
As regards what is to be done in Mass today, the General Instruction of the Roman Missal says: “A bow of the head is made when the three Divine Persons are named together and at the names of Jesus, of the Blessed Virgin Mary and of the saint in whose honour Mass is being celebrated” (GIRM 275).
The importance of honouring the holy name of Jesus is seen too in the feast of that name, which has been celebrated, at least at the local level, since the end of the 15th century.   The feast was inserted into the universal calendar by Pope Innocent XIII in 1721 and is now celebrated on 3 January.

Given the widespread misuse of the names of God and Jesus today in ordinary life, as well as on television, in films and in other forms of entertainment, it is especially important to do all we can to restore respect for the name of God.
Bowing our head when we pronounce or hear the name of Jesus is a good way to do this.
Also important is to make an internal act of reparation whenever we hear the name of God or Jesus blasphemed.
It should hurt us that the object of our love is mistreated in this way.
It may very well be that the custom of bowing the head at the name of Jesus will pass out of general use, as have other laudable customs in recent times but that does not prevent us personally from continuing to live it and passing on to our children this ancient custom.

LET US EACH ONE BRING IT BACK for the very Angels in Heaven bow at the name of Jesus. And even the demons in Hell. 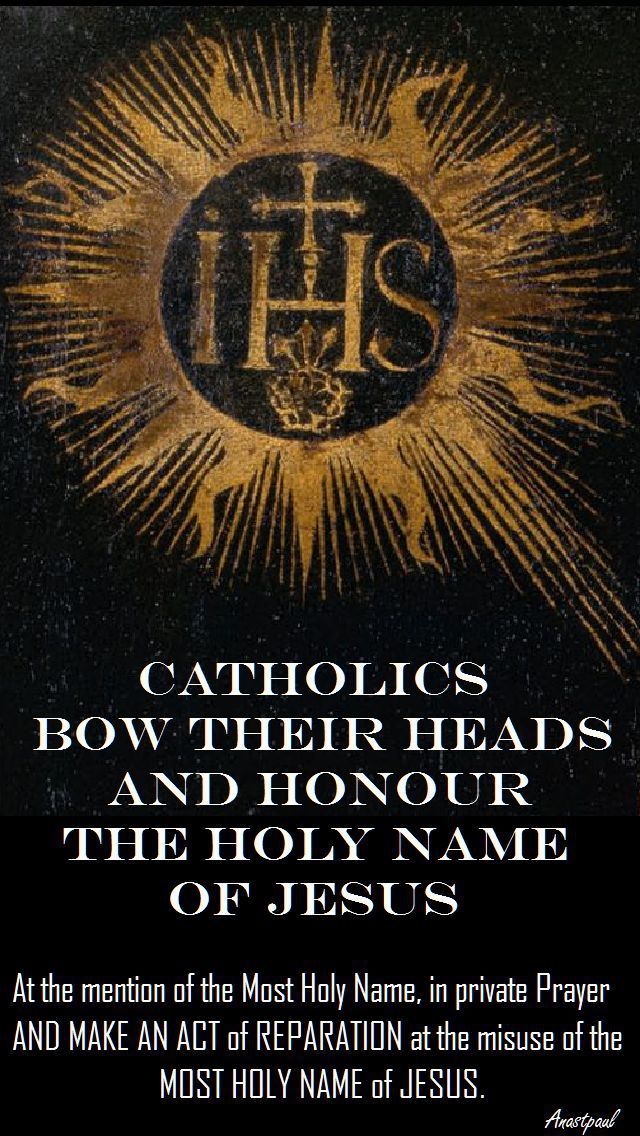 Another good practice that we could take to heart during this Month of the Holy Name of Jesus is the recitation of the Jesus Prayer. his prayer is as popular among Eastern Christians, both Catholic and Orthodox, as the rosary is among Roman Catholics but it’s not as well known in the West.   This month, why not take a few minutes to memorise the Jesus Prayer and pray it during those moments of the day when you are between activities, or travelling, or simply taking a rest?   Keeping Christ’s Name always on our lips is a good way to ensure that we draw ever nearer to Him.

THE JESUS PRAYER
O Lord Jesus Christ, Son of God, have mercy on me, a sinner

One thought on “Monthly Catholic Devotions: JANUARY is the Month of THE MOST HOLY NAME OF JESUS”