Our Lady of Argenteuil, Paris, built by King Clovis I containing a portion of the Seamless Garment.

The Abbot Orsini wrote: “This priory preserves a portion of the seamless garment of Our Lord.”

In about the year 500, Clovis was the King of the Franks but he was not yet a Catholic.   Years passed as his wife Clotilda prayed for her husband to convert, yet always King Clovis demurred.   Then one fateful day Clovis was engaged in a desperate battle, finding himself sorely bested.   At the point of ruin he cried aloud to the Christian God to assist him, promising to forsake his pagan gods if he were granted a miraculous victory.

Looking up to heaven, Clovis cried:

“Jesus Christ, whom Clotilda declares to be the Son of the Living God, who it is said gives aid to the oppressed and victory to those who put their hope in Thee, I beseech the glory of Thy aid!   If Thou shalt grant me victory over these enemies and I test that power which people consecrated to Thy name say they have proved concerning Thee, I will believe in Thee and be baptised in Thy name.   For I have called upon my gods but, as I have proved, they are far removed from my aid.   So I believe that they have no power, for they do not succour those who serve them.   Now I call upon Thee and I long to believe in Thee – all the more that I may escape my enemies!”

God was pleased to answer Clovis’ petition immediately, for no sooner had he prayed than his enemies fled the field.   Clovis won the battle and he was a man of his word. Hating his former error, Clovis converted to the True Faith.

It is related in the Gospels that Christ’s executioners played dice over this tunic. According to legend, that tunic was found in the fourth century by Saint Helena, the mother of Emperor Constantine.   It was then kept at Constantinople until the eighth century.

In the year 800, the Empress Irene of Byzantium offered Charlemagne the Holy Tunic at his coronation as Emperor of the West.   The emperor then gave the relic to the priory of Argenteuil when his daughter, Theodrade, became abbess.

In the year 850 the Normans plundered the village of Argenteuil, including the Basilica of Saint Dennis but the tunic was hidden in a wall before their arrival.   When the abbey was rebuilt in 1003, the relic was restored.   It is venerated until the 16th century when it was partially burned by Huguenots in 1567.

During the French Revolution the Benedictine priory was destroyed and the relic then given to a parish church for safekeeping.   In 1793, a priest found it necessary to cut it into pieces and bury them in his garden to protect them from profanation.   In 1795, after the priests imprisonment had ended, the Holy Tunic appeared again and the different fragments were sewn back together.

The Holy Tunic was displayed again in the nineteenth century and pilgrimages resumed. On the 13 of December in 1983, the parish priest of Saint Dennis discovered the tunic had been stolen.   On 2 February 1984, Father Guyard received a phone call from a stranger promising to return the treasure to the condition that their names would be kept secret. That same evening the tunic, with its case, was found in the Basilica of Saint Dennis.

The last solemn exposition of the tunic took place during the Easter holiday in 2016.   In six days, approximately 80,000 people came to see the tunic. 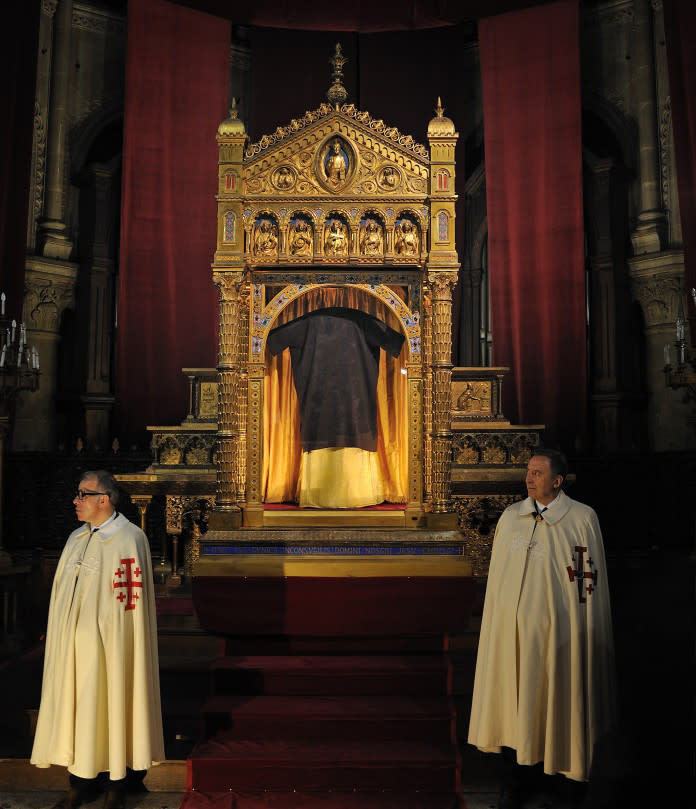 The Holy Tunic measures nearly 5’ by 3’ in size.   The fibres are wool and of a very regular size.   It is a soft, lightweight fabric and the weaving is uniform and regular with a twisted “Z,” made on a primitive loom.   The tunic is remarkable for a tunic woven manually, as it is made without any seam, including the sleeves.   The dark brown fabric is typical of the clothing in the early centuries of the Christian era.   The fabric was dyed brown, using a method widely in practice at the time by people of modest means.   The construction and dyeing show the tunic to date from the time of Christ.   It is the garment worn by Christ after the Flagellation and along the road to Calvary as He carried His cross.   Christ’s blood and sweat thus impregnate the fabric.    In 1985 a test was done showing the blood was type AB.   Pollen common to Palestine have also been found in the fabric. 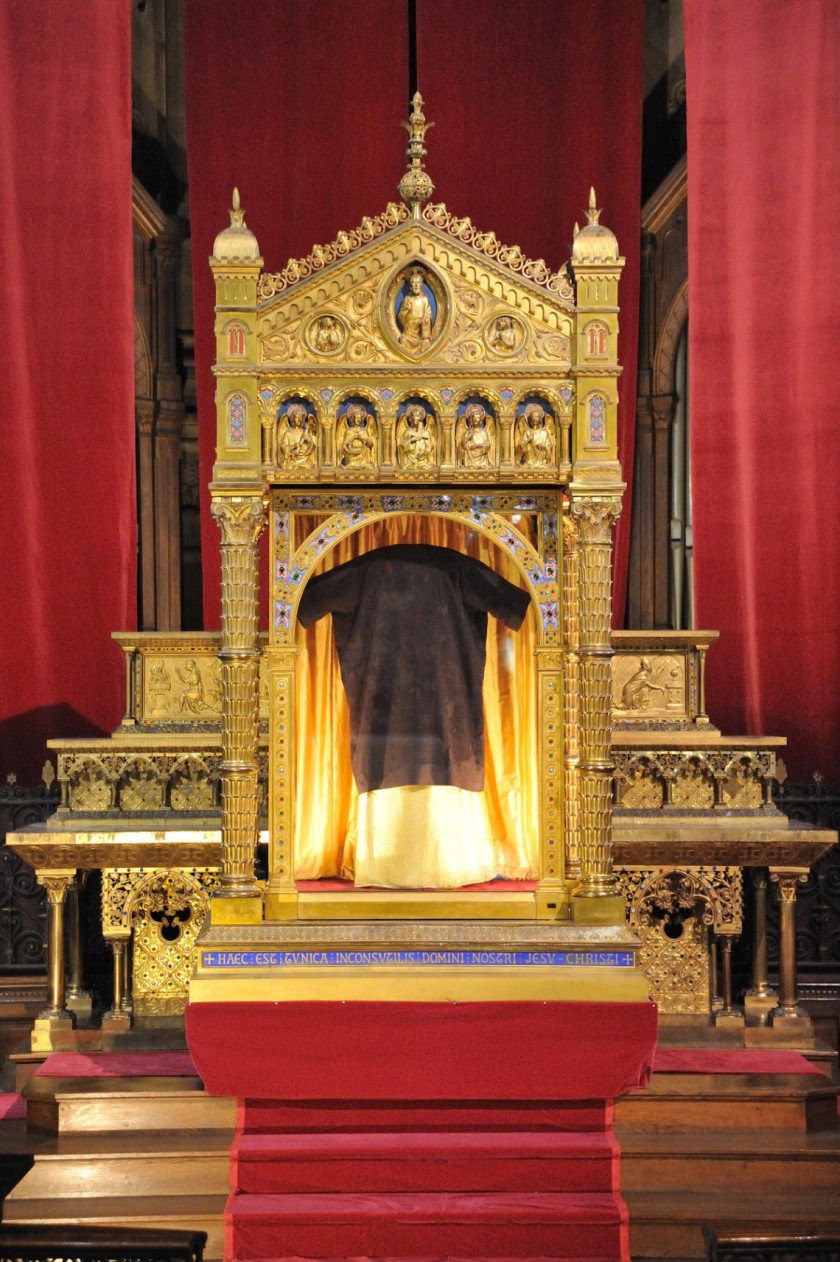