Saint of the Day – 13 October – Blessed Alexandrina/of Balazar Maria da Costa (1904-1955) Laywoman, Victim Soul, Mystic, Salesian Co-operator – best known as Blessed Alexandrina of Balazar was a Portuguese mystic and victim soul, member of the Association of Salesian Cooperators, who was born and died in Balazar (a rural parish of Póvoa de Varzim).   Alexandrina left many written works, which have been studied mainly in Italy by Father Umberto Pasquale.   On 25 April 2004 she was declared Blessed by St Pope John Paul II who stated that “her secret to holiness was love for Christ”.

Alexandrina Maria da Costa was born on 30 March 1904 in Balasar, Portugal.   She received a solid Christian education from her mother and her sister, Deolinda and her lively, well-mannered nature made her likeable to everyone.

Her unusual physical strength and stamina also enabled her to do long hours of heavy farm work in the fields, thus helping the family income.

When she was 12, Alexandrina became sick with an infection and nearly died, the consequences of this infection would remain with her as she grew up and would become the “first sign” of what God was asking of her – to suffer as a “victim soul”.

On Holy Saturday of 1918, while Alexandrina, Deolinda and a young apprentice were busily sewing, three men violently entered their home and attempted to sexually violate them.   To preserve her purity, Alexandrina jumped from a window, falling four metres to the ground.

Her injuries were many and the doctors diagnosed her condition as “irreversible” – it was predicted the paralysis she suffered would only get worse.

Until age 19, Alexandrina was still able to “drag herself” to church where, hunched over, she would remain in prayer, to the great amazement of the parishioners.   With her paralysis and pain worsening, however, she was forced to remain immobile and from 14 April 1925 until her death – approximately 30 years – she would remain bedridden, completely paralysed. 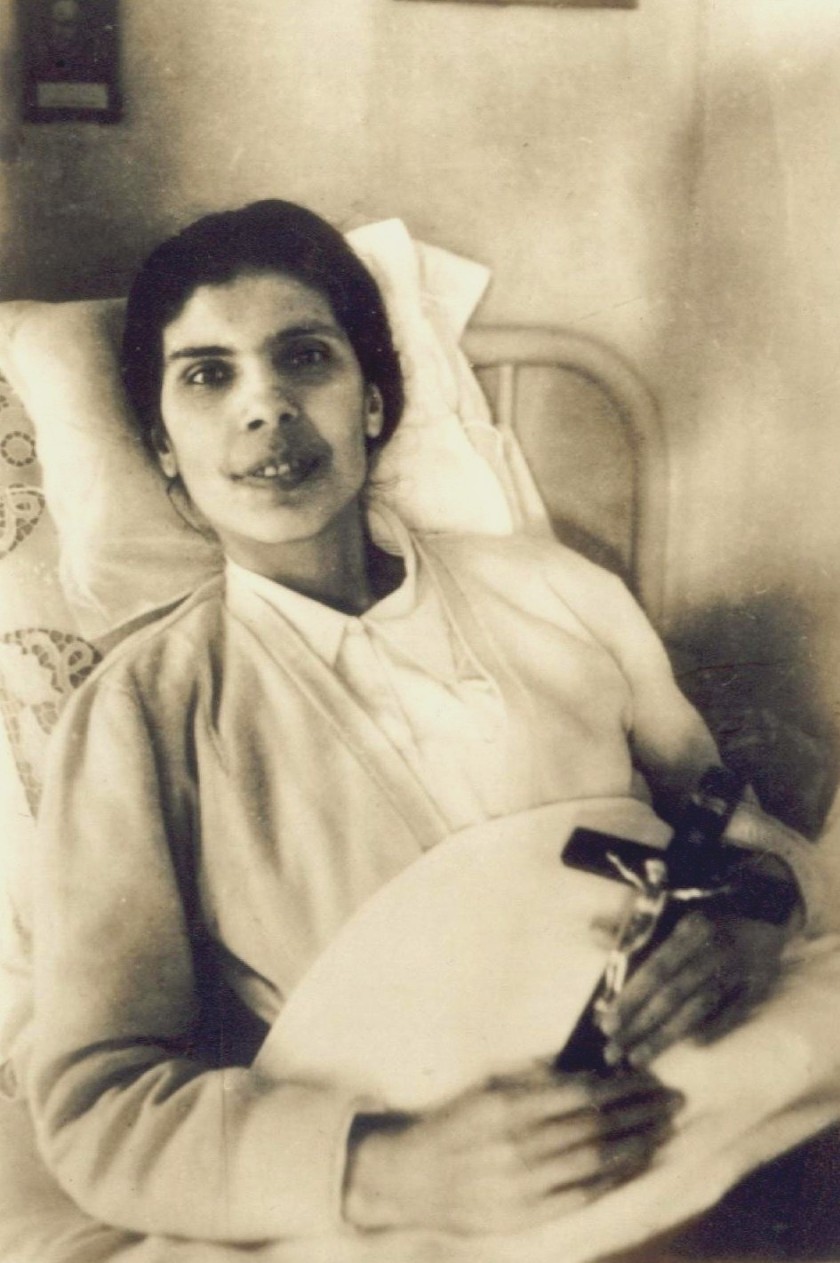 Alexandrina continued to ask the Blessed Mother for the grace of a miraculous healing, promising to become a missionary if she were healed.

Little by little, however, God helped her to see that suffering was her vocation and that she had a special call to be the Lord’s “victim”.   The more Alexandrina “understood” that this was her mission, the more willingly she embraced it.

She said: “Our Lady has given me an even greater grace, first, abandonment, then, complete conformity to God’s will, finally, the thirst for suffering”.

Mission to suffer with Christ:
The desire to suffer continued to grow in her the more her vocation became clear, she understood that she was called to open the eyes of others to the effects of sin, inviting them to conversion and to offer a living witness of Christ’s passion, contributing to the redemption of humanity.

And so it was that from 3 October 1938 until 24 March 1942, Alexandrina lived the three-hour “passion” of Jesus every Friday, having received the mystical grace to live in body and soul Christ’s suffering in his final hours.   During these three hours, her paralysis was “overcome” and she would relive the Stations of the Cross, her movements and gestures accompanied by excruciating physical and spiritual pain.   She was also diabolically assaulted and tormented with temptations against the faith and with injuries inflicted on her body.

Human misunderstanding and incredulity were also a great cross for her, especially when those she most expected would “assist” her – members and leaders of the Church – were adding to her crucifixion.

An investigation conducted by the Curia of Braga resulted in a circular letter written by the Archbishop which contained a series of “prohibitions” regarding Alexandrina’s case. It was the result of a negative verdict made by a commission of priests.

In addition and by way of spiritual comfort, after her spiritual director, a Jesuit priest who had helped her from 1934 to 1941, stopped assisting her, a Salesian priest, Fr Umberto Pasquale, came to her aid in 1944.

Nourished only by the Eucharist:
On 27 March 1942, a new phase began for Alexandrina which would continue for 13 years and seven months until her death.   She received no nourishment of any kind except the Holy Eucharist, at one point weighing as few as 33 kilos (approximately 73 pounds).

Medical doctors remained baffled by this phenomenon and began to conduct various tests on Alexandrina, acting in a very cold and hostile way towards her.   This increased her suffering and humiliation but she remembered the words that Jesus himself spoke to her one day: “You will very rarely receive consolation…  I want that while your heart is filled with suffering, on your lips there is a smile”.

As a result, those who visited or came into contact with Alexandrina always found a woman who, although in apparent physical discomfort, was always outwardly joyful and smiling, transmitting to all a profound peace.   Few understood what she was deeply suffering and how real was her interior desolation.

Fr Pasquale, who stayed close to Alexandrina throughout these years, ordered Alexandrina’s sister to keep a diary of her words and her mystical experiences.

In 1944, Alexandrina became a member of the “Union of Salesian Cooperators” and offered her suffering for the salvation of souls and for the sanctification of youth.   She kept a lively interest in the poor as well as in the spiritual health of those who sought out her counsel.

“Do not offend Jesus anymore!’:
As a “testimony” to the mission to which God had called her, Alexandrina desired the following words written on her tombstone:   “Sinners, if the dust of my body can be of help to save you, come close, walk over it, kick it around until it disappears.   But never sin again, do not offend Jesus anymore!   Sinners, how much I want to tell you…. Do not risk losing Jesus for all eternity, for He is so good.   Enough with sin.   Love Jesus, love Him!”.   Below is her Tomb, the Church where it resides in Balaza and her room for 30 years.

In Ireland there is an Alexandrina Society that spreads knowledge of her life and teachings.  The aims of the Society are 1) To spread devotion to Alexandrina and make her known, 2) To pray for the conversion of sinners, 3) To pray for Priests and acknowledge any favours received, 4) To pray for members’ intentions. Amen.