Saint of the Day – 19 July – Blessed Józef Achilles Puchala OFM Conv (1911-1943) Martyr – Priest and Franciscan Friar.   Also known as – Achilles Puchala, Brother Achilles, Father Achilles.   Born on 18 March 1911 in Kosina, Podkarpackie, Poland and died on 19 July 1943 in a barn outside Borovikovshchina, Minskaya voblasts’, (now) in Belarus.   Additional Memorial on 12 June as one of the 108 Martyrs of World War II. 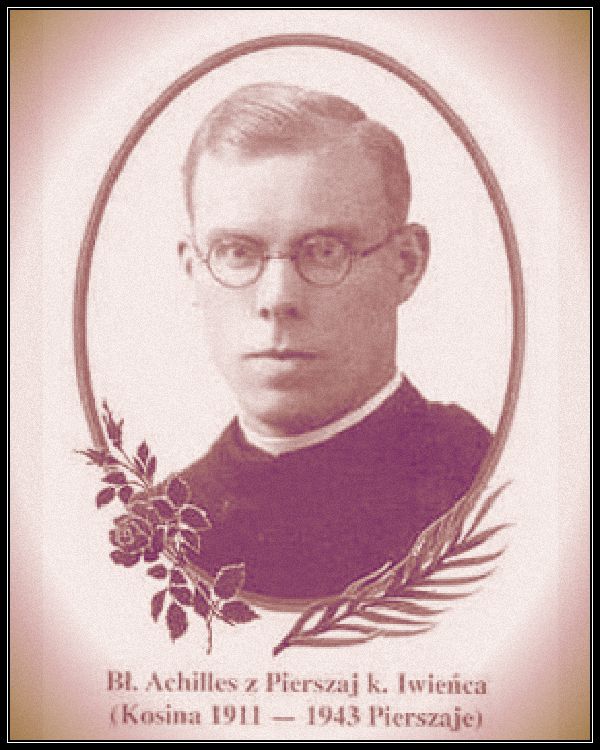 Blessed Jozef was born on 18 March 1911 and baptised on the day of his birth, which is the way Catholics lived and should still live!

He entered the minor seminary in Lviv (in modern Ukraine) in 1924 and once ordained a Deacon, he entered the Monastery of the Franciscan as a Friar Minor Conventual, taking the name Achilles and making his solemn vows on 22 May 1932.

He was ordained as a Priest on 5 July 1936.   Before the total devastation of Poland by the Nazis, he served in the Franciscan convents in Grodno and Iwieniec in Poland.

In early 1940 he moved into parish service in Pierszaje, Poland to help with a shortage of priests who had been arrested, murdered or fled ahead of arrest, by the Gestapo during the Nazi occupation and persecutions of World War II.

Finally, Blessed Jozef too was arrested, tortured and eventually murdered by the Gestapo on 19 July 1943.   The barn in which he was martyred was set alight but his remains were later retrieved by local Catholics.   They were buried in the Parish Church, in which Blessed Jozef had served in in Pierszaje, Poland.

Blessed Jozef was Beatified on 13 June 1999 by St Pope John Paul along with the other 107 (known) Martyrs of World War II.   Their liturgical feast day is 12 June.   The 108 were Beatified by St Pope John Paul II in Warsaw, Poland.   The group comprises 3 bishops, 52 priests, 26 members of male religious, 3 seminarians, 8 female religious and 9 lay people. There are two parishes named for the 108 Martyrs of World War II in Powiercie in Koło County and in Malbork, Poland.