Father Jose Maria’s objective was the evangelisation and promotion of the poor, especially women.   He knew that a well formed woman was the foundation of a just and Christian society.   For this reason, he required, that in the schools and orphanages there should be an integral education which would cover the whole person in all its aspects, from its transcendent aspects to its most rudimentary and material, such things as domestic labour.

In 1894 in Puebla he opened the centre, Christian Mercy, to house women who were falling into prostitution.   In this house he built schools and workshops for orphan girls. He was able to accomplish all this because of his trust in God and his wonderful disposition which attracted the generosity of many people in Puebla.

He did not neglect other sectors of society which were not protected:
“Charity will make you find in the poor, the brother who has
cried and suffered much and you must know, that those
tears which you dried up with love, Christ Himself keeps as
precious pearls of your crown.   The Servants of the Sacred
Heart of Jesus and of the Poor shall not seek any
recompense on this earth but their treasure will be in
heaven.   For this reason, they will find joy in the scorns,
ingratitude and reproaches they will receive from the poor
seniors, because if everything you do will be pleasant, one
may fear that your recompense will remain here on earth.” 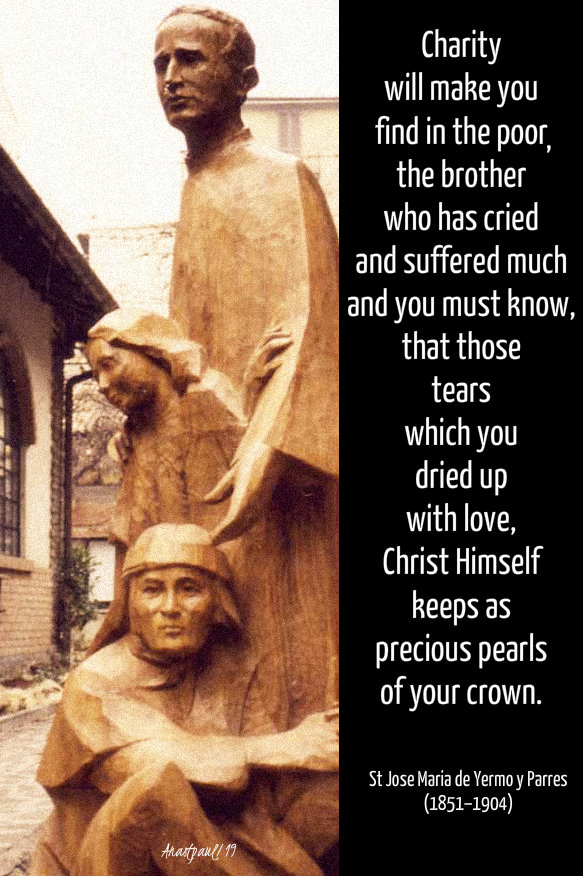 Having given his whole life to God and to the building of his kingdom on this earth, on the morning of 20 September 1904, after he asked the sisters to sing the Ave Maris Stella, he died.   Many people in Puebla mourned his death since all recognised him as “the Giant of The Poor.”   José María de Yermo y Parres never left us  . His presence continues today in the works he left behind which have transcended time and space:
“That mustard seed, that I do not know how it came to my hands, was born and grew and today, it holds in its branches, a great number of poor people.”

St John Paul said during the Canonisation homily, on Sunday, 21 May 2000:

“José María de Yermo y Parres, who lived his priestly commitment to Christ by following Him with all his might, distinguishing himself at the same time by an essentially prayerful and contemplative attitude.   In the Heart of Christ he found guidance for his spirituality and, in reflecting on his infinite love for men, he desired to imitate Him by making charity the rule of his life.
The new saint founded the Religious Servants of the Sacred Heart of Jesus and of the Poor, a name which combines the two great loves that express the new saint’s spirit and charism in the Church.”