Blessed Giles was born at Vouzella, near Coimbra, Portugal, about in 1185.   His father was the governor of Coimbra and a Counsellor of Sancho I, the king of Portugal.   Although his father wanted Giles to enter the ecclesiastical state and the King was lavish in bestowing ecclesiastical benefices on Giles, while still a child, Giles, however, wanted to study medicine.   After some time studying philosophy in Coimbra, Giles left to study medicine in Paris.

Blessed Giles was intercepted by a kindly stranger on his trip to Paris, who promised to teach him magic if he would sign his soul over to the devil in blood.   Blessed Giles, the legend continues, signed away his soul and studied magic for seven years before going to Paris where he excelled in his medical studies and was noted for many fantastic cures. However, we know that at some point Blessed Giles reformed his life and repented. 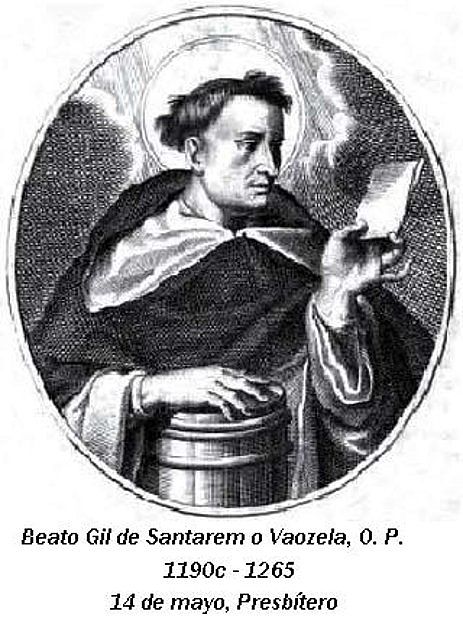 He returned to Portugal and took the Dominican habit in at a newly erected convent in Palencia in about 1224.   Shortly after arriving in Palencia, his Dominican superiors sent Blessed Giles to the Dominican convent at Scallabis, present day Santarem, Portugal. There he led a life of prayer and penance and for seven years was tormented about the compact he had entered into with the devil.   However, according to Blessed Giles’ biographer, finally Satan was compelled to surrender Giles’ soul and placed the compact he had signed before the Altar of the Blessed Virgin.

After this experience, Giles returned to Paris to study theology.   On his second return to Portugal, he became famous for his piety and learning.   He was twice elected provincial of the Dominican Order in Spain.

Noted for his humble service to his brethren, he died at Santarem on 14 May 1265. Blessed Giles was Beatified by Pope Benedict XIV (cultus confirmed) on 9 May 1748.