Novena to Our Lady of Lourdes – DAY TWO – 3 February (we Pray the Novena for our own intentions and for the sick, the infirm within our own communities but also for all those throughout the world who suffer, especially those who have no-one to pray for them in preparation for the Wold Day of the Sick on 11 February.)

DAY TWO
Be blessed, O most pure Virgin,
for having vouchsafed to manifest yourself shining with light, sweetness and beauty,
in the Grotto of Lourdes, saying to the child Saint Bernadette:
“I am the Immaculate Conception!”
O Mary Immaculate, inflame our hearts with just one ray of the burning love of your pure heart
Let them be consumed with love for Jesus and for you,
in order that we may merit one day to enjoy your glorious eternity.
O dispenser of His graces here below,
take into your keeping and present to your Divine Son
the petition for which we are making this novena.
(make your request)
O Brilliant star of purity, Mary Immaculate, Our Lady of Lourdes,
glorious in your assumption,
triumphant in your coronation,
show unto us the mercy of the Mother of God.
Virgin Mary, Queen and Mother,
be our comfort, hope, strength and consolation. Amen.

Thought for the Day – 3 February

We know that Bishop Blaise was martyred in his episcopal city of Sebastea, Armenia, in 316.    The legendary Acts of St. Blaise were written 400 years later.    According to them Blaise was a good bishop, working hard to encourage the spiritual and physical health of his people.    Although the Edict of Toleration (311), granting freedom of worship in the Roman Empire, was already five years old, persecution still raged in Armenia. Blaise was apparently forced to flee to the back country.    There he lived as a hermit in solitude and prayer, but he made friends with the wild animals.    One day a group of hunters seeking wild animals for the amphitheater stumbled upon Blaise’s cave.    They were first surprised and then frightened.    The bishop was kneeling in prayer surrounded by patiently waiting wolves, lions and bears.

400 years went by before St Blaise’s life was chronicled, thus there was ample time for fiction to creep in with fact.    Who can be sure how accurate Blaise’s biographer was?   But biographical details are not essential.    Blaise is seen as one more example of the power those have who give themselves entirely to Jesus.    As Jesus told his apostles at the Last Supper, “If you remain in me and my words remain in you, ask for whatever you want and it will be done for you” (John 15:7).   With faith we can follow the lead of the Church in asking for Blaise’s protection.

St Blaise Pray for us!

Quote of the Day – 3 February

“The statue must be chiselled with very sharp tools
before it is fit to be placed in’ the grand gallery.” 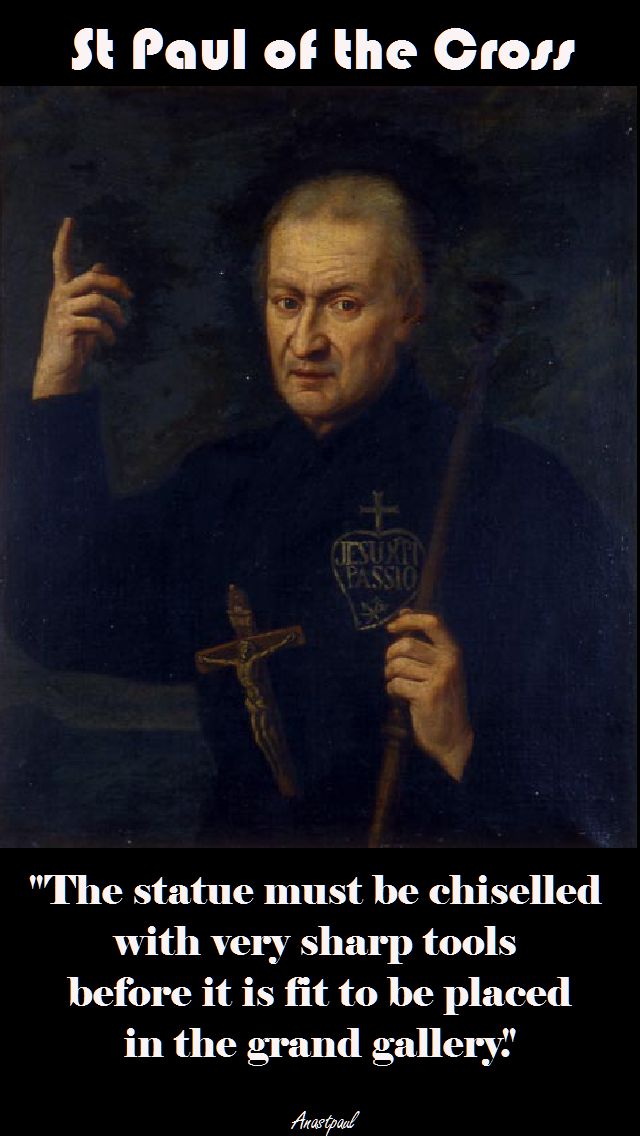 It’s an ancient custom of the Church to bless the sick, rooted in the ministry of Christ and his apostles. According to the Pastoral Care of the Sick: Rites of Anointing and Viaticum, the annual blessing of throats is a traditional sign of the struggle against illness in the life of the Christian. The blessing is ordinarily given during Mass or a celebration of the Word of God on February 3, the memorial of St. Blaise, following Candlemas, the feast of the Presentation of the Lord.

Through the intercession of Saint Blaise,
bishop and martyr, may God deliver you
from ailments of the throat and from
every other evil.
In the name of the Father and of the Son
and of the Holy Spirit. Amen 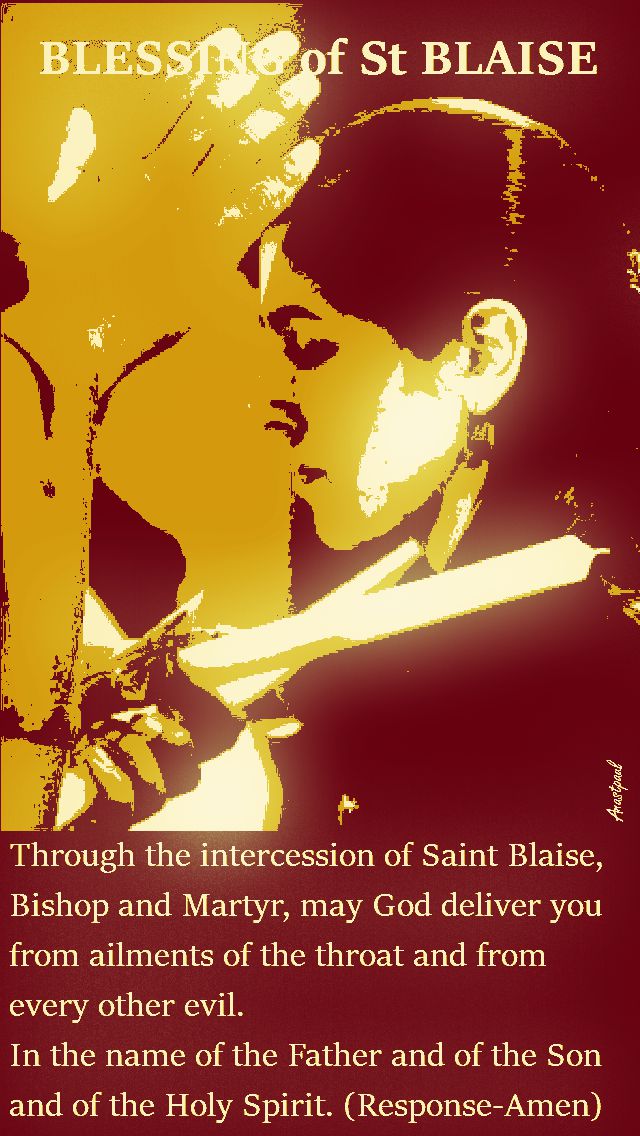 He touched their eyes and said, “because of your faith it shall be done to you” and they received their sight………..Matthew 9:29-30

REFLECTION – The blind men cried out to Christ and overcame the cries of the crowd.   Such is the nature of faith that the greater are the obstacles it encounters, the more ardent it becomes…………..St Charles Borromeo

PRAYER – Heavenly Father, grant me a living faith in the Good News of Christ.   Let it overcome all obstacles and become deeper every day of my life.   Let my faith in You withstand all the evils of the world around me and reach out to inspire others.   St Blaise, you were and are a light of faith and help to all, pray for us, amen! 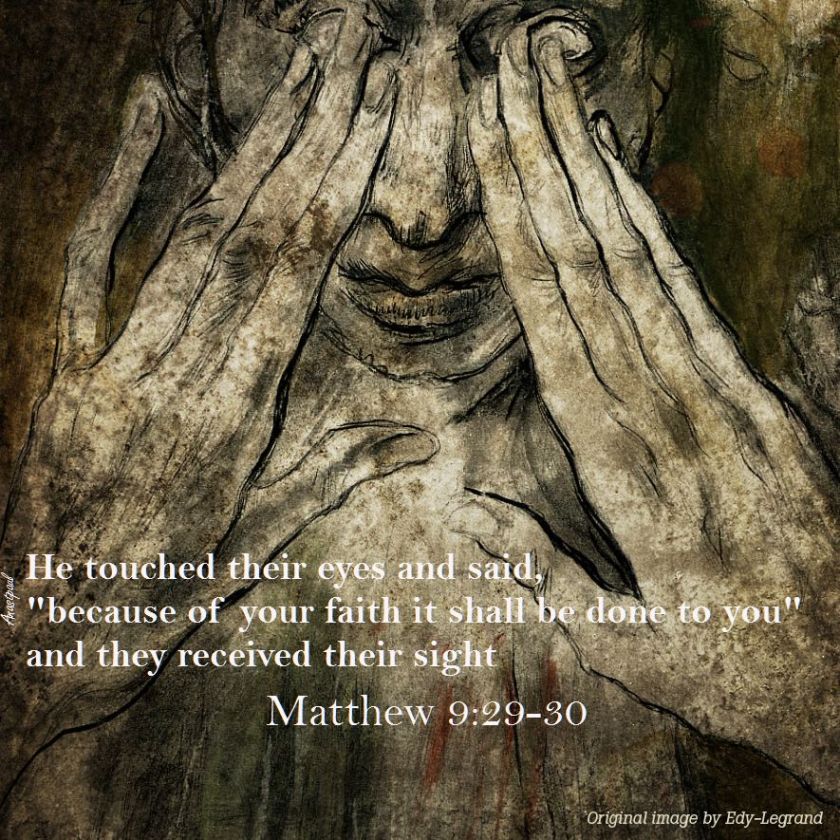 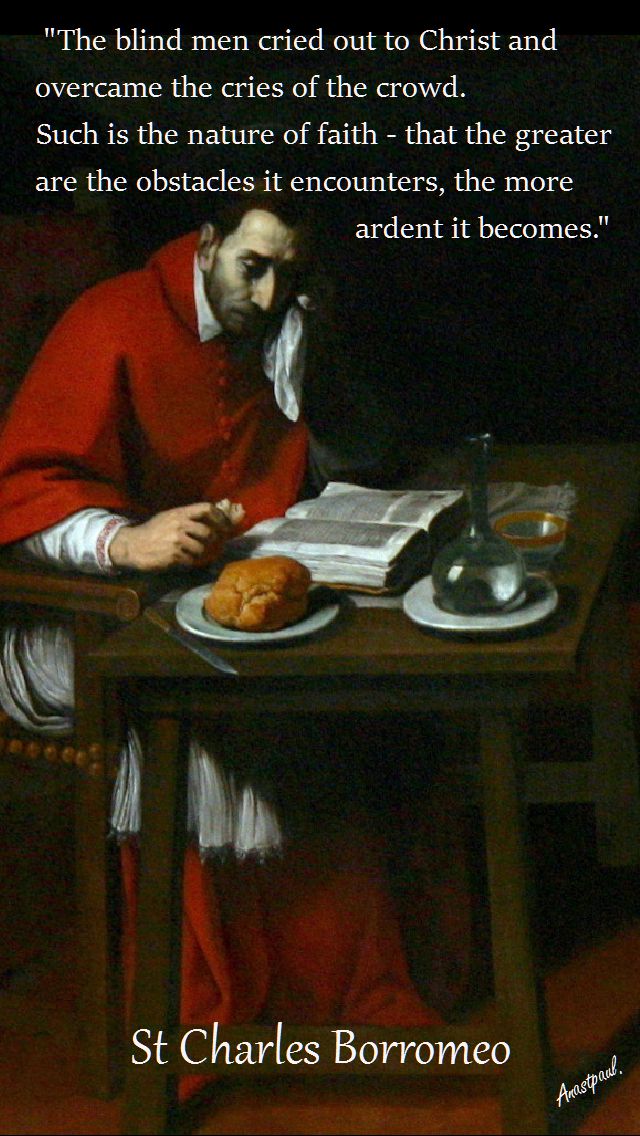 PRAYER OF SAINT COLUMBA OF IRELAND

O Lord, grant us that love
which can never die,
which will enkindle our lamps
but not extinguish them,
so that they may shine in us
and bring light to others.
Most dear Saviour,
enkindle our lamps that they may shine
forever in Your temple.
May we receive unquenchable light
from You so that our darkness
will be illuminated
and the darkness of the world
will be made less, amen.

The first reference we have to him is in manuscripts of the medical writings of Aëtius Amidenus, a court physician of the very end of the 5th or the beginning of the 6th century; there his aid is invoked in treating objects stuck in the throat. Marco Polo reported the place where “Meeser Saint Blaise obtained the glorious crown of martyrdom”, Sebastea;[3] the shrine near the citadel mount was mentioned by William of Rubruck in 1253. However, it appears to no longer exist.

From being a healer of bodily ailments, Saint Blaise became a physician of souls, then retired for a time to a cavern where he remained in prayer. As bishop of Sebastea, Blaise instructed his people as much by his example as by his words, and the great virtues and sanctity of the servant of God were attested by many miracles. From all parts, the people came flocking to him for the cure of bodily and spiritual ills. He is said to have healed animals (who came to the saint on their own for his assistance) and to have been assisted by animals.
In 316, the governor of Cappadocia and Lesser Armenia Agricolaus began a persecution by order of the Emperor Licinius and Saint Blaise was seized. After his interrogation and a severe scourging, he was hurried off to prison and subsequently beheaded.
The legendary Acts of St. Blaise were written 400 years later. The Acts of St. Blaise, written in Greek, are medieval.   The legend as given in the Grande Encyclopédie is as follows:

Blaise, who had studied philosophy in his youth, was a doctor in Sebaste in Armenia, the city of his birth, who exercised his art with miraculous ability, good-will and piety.   When the bishop of the city died, he was chosen to succeed him, with the acclamation of all the people.   His holiness was manifest through many miracles: from all around, people came to him to find cures for their spirit and their body; even wild animals came in herds to receive his blessing.   In 316, Agricola, the governor of Cappadocia and of Lesser Armenia, having arrived in Sebastia at the order of the emperor Licinius to kill the Christians, arrested the bishop.   As he was being led to jail, a mother set her only son, choking to death of a fish-bone, at his feet and the child was cured straight away. Regardless, the governor, unable to make Blaise renounce his faith, beat him with a stick, ripped his flesh with iron combs, and beheaded him.

Blaise is one of the Fourteen Holy Helpers, saints who were patrons for almost every aspect of life.   People in the Middle Ages showed devotion to these saints as a group 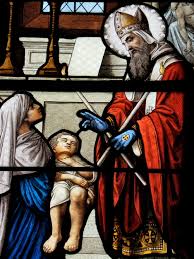 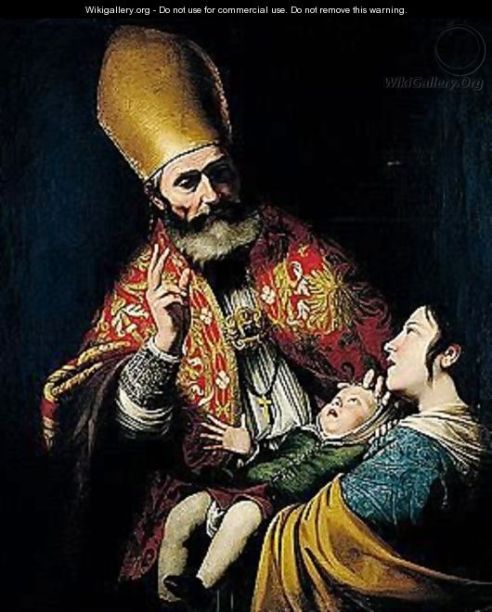 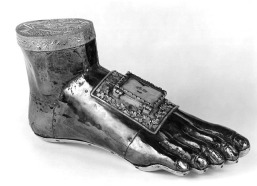