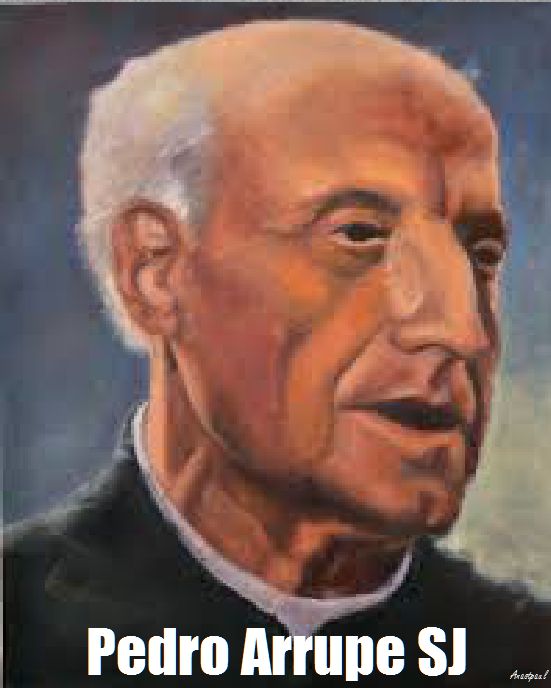 He guided the Society through the tumultuous post-Vatican II years.   He called for a renewed commitment to the Society’s roots in the Spiritual Exercises and he oriented the Jesuits toward service to the poor and to refugees.

He had a charismatic personality and was beloved by many in the Society and outside it.

He articulated the goal of Jesuit education as training “men and women for others”:

Let love be genuine;  hate what is evil, hold fast to what is good;  love one another with mutual affection;  outdo one another in showing honour………Romans 12:9-10

Are you complacent, too accepting of things as they are?   Talk to God about this.

Novena to Our Lady of Lourdes – DAY FOUR– 5 February (we Pray the Novena for our own intentions and for the sick, the infirm within our own communities but also for all those throughout the world who suffer, especially those who have no-one to pray for them in preparation for the Wold Day of the Sick on 11 February.)

O Immaculate Queen of Heaven,
we your wayward, erring children,
join our unworthy prayers of praise and thanksgiving
to those of the angels and saints and of your own-
that the One, Holy, and Undivided Trinity may be glorified
in heaven and on earth.
Our Lady of Lourdes,
as you looked down with love and mercy upon Bernadette
as she prayed her rosary in the grotto,
look down now, we beseech you,
with love and mercy upon us.
From the abundance of graces granted you by your Divine Son,
sweet Mother of God,
give to each of us all that your motherly heart sees we need
and at this moment look with special favour
on the grace we seek in this novena.
(make your request)
O Brilliant star of purity,
Mary Immaculate,
Our Lady of Lourdes,
glorious in your assumption,
triumphant in your coronation,
show unto us the mercy of the Mother of God,
Virgin Mary, Queen and Mother,
be our comfort, hope, strength and consolation. Amen.

Female saints were numerous in the early Church and the cruelties these saints suffered for their faith encouraged many others to go to their martyrdom.   These early witnesses to the faith became the great Christian heroes and heroines and their zeal did a great deal to cement and establish the faith.   Many. like St Agatha, suffered centuries ago but their memory is kept fresh, as if they had died yesterday.    As is common in the story of man, we learn not from our past, persecutions against Christians seems to constantly rear it’s ugly head – now we suffer too and our women are under a great attack in the modern world.   Let us call on Agatha to be with us, to pray for us all and in particular to pray that all Christian women, may protect their purity and chastity.

St Agatha, pray for us! 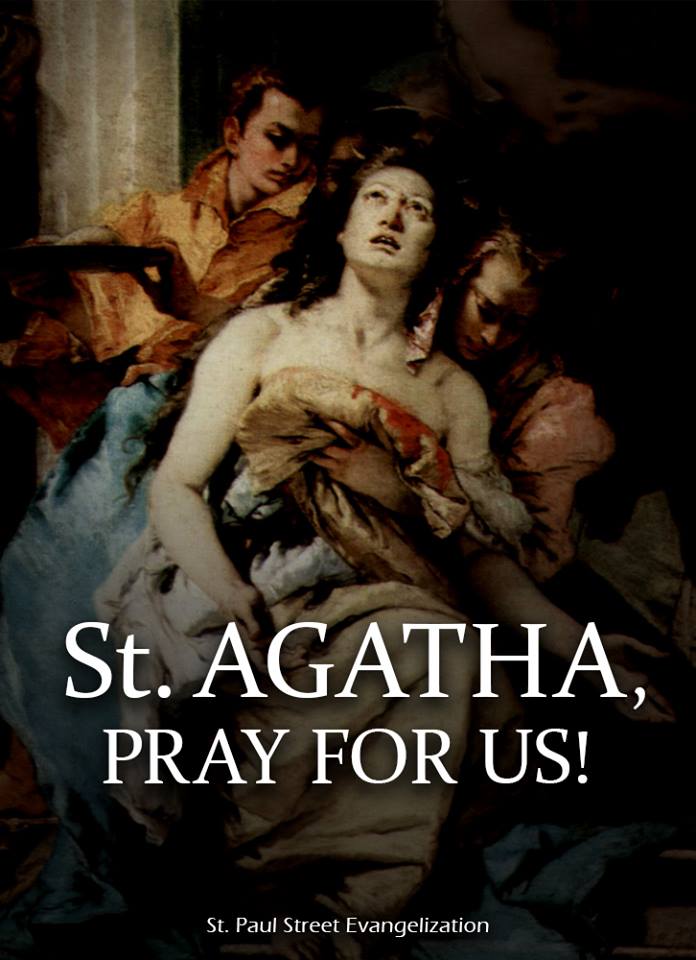 Quote/s of the Day – 5 February

“Jesus Christ, Lord of all things!
You see my heart, you know my desires.
Possess all that I am – you alone.
I am your sheep; make me worthy
to overcome the devil.”
~~~- Saint Agatha

“She teaches by her example to hasten to the true Good –  God alone.” 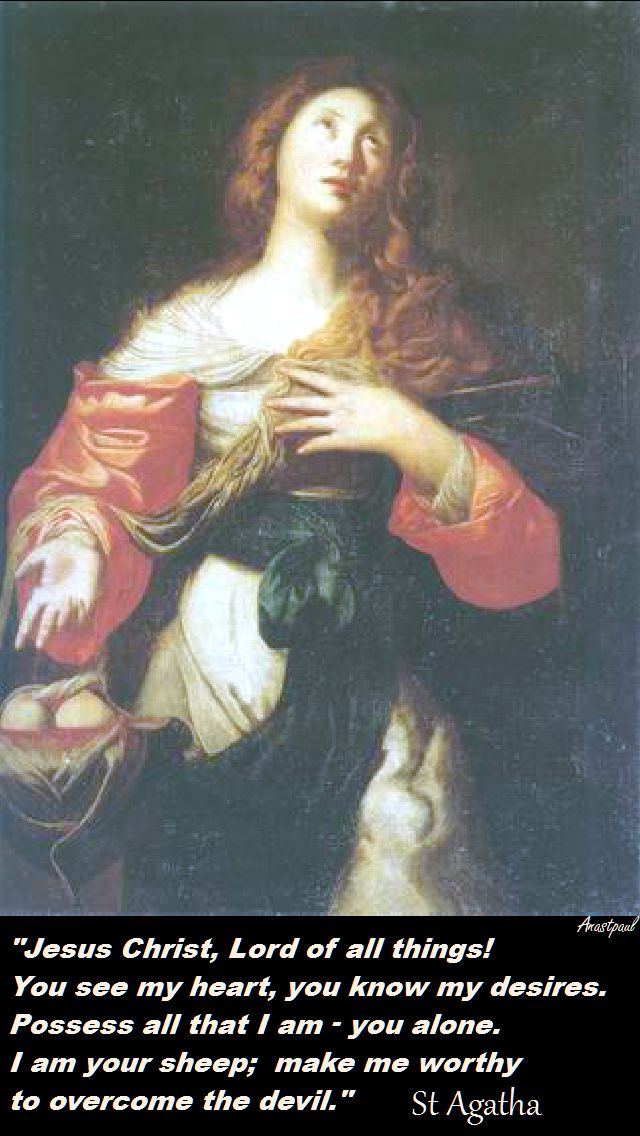 REFLECTION – “You have within you everything
that you need to purchase the kingdom of heaven.
Joy will be purchased by your sorrow,
rest by your labour,
glory by your humiliation
and eternal life by your passing death”……..St Augustine

PRAYER – Loving Father, teach me how to make every event on earth lay up treasure for me in heaven. Help me to endure sorrows, labours, hardships, humiliations and death willingly so as to attain heaven. Help me to always manifest You in my life as the life of St Agatha did. St Agatha please intercede for us all, amen! 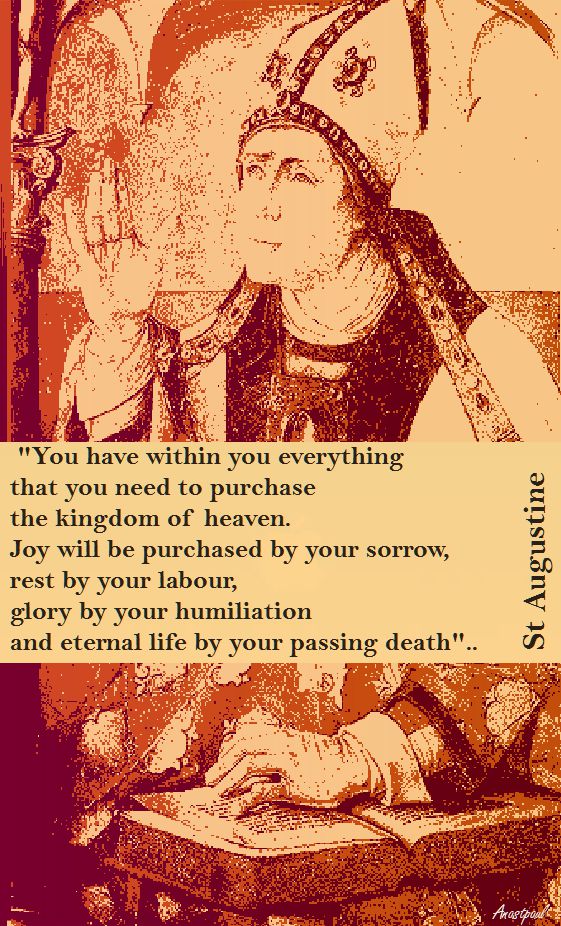 Help us, O Lord, our God,
since we cannot flee from the body,
nor the body flee from us:
we must carry it about,
because it is bound up with us.
We cannot destroy it;
we are forced to preserve it.
But the world surrounds us and assails us
through the five gateways of sense.
Alas! Everywhere we are in conflict,
everywhere darts fly against us,
everywhere there are temptations,
there are snares!
Deliver us, we beseech You,
from our enemies;
defend us from all dangers to the soul
and to the body, Lord,
that at length we may come to Your eternal rest,
through Jesus Christ, Our Lord. Amen.

“My fellow Christians, our annual celebration of a martyr’s feast has brought us together. Agatha achieved renown in the early Church for her noble victory. For her, Christ’s death was recent, His blood was still moist. Her robe is the mark of her faithful witness to Christ. Agatha, the name of our saint, means “good.” She was truly good, for she lived as a child of God. Agatha, her goodness coincides with her name and her way of life. She won a good name by her noble deeds and by her name she points to the nobility of those deeds. Agatha, her mere name wins all men over to her company. She teaches them by her example to hasten with her to the true Good, God alone.” – from a homily on Saint Agatha by Saint Methodius of Sicily

Agatha was born at Catania or Palermo, Sicily and she was martyred in approximately 251. She is one of seven women, who, along with the Blessed Virgin Mary, are commemorated by name in the Canon of the Mass.
One of the most highly venerated virgin martyrs of Christian antiquity, Agatha was put to death during the persecution of Decius (250–253) in Catania, Sicily, for her determined profession of faith.

Although the martyrdom of Saint Agatha is authenticated, and her veneration as a saint had spread beyond her native place even in antiquity, there is no reliable information concerning the details of her death.

According to Jacobus de Voragine, Legenda Aurea of ca. 1288, having dedicated her virginity to God, fifteen-year-old Agatha, from a rich and noble family, rejected the amorous advances of the low-born Roman prefect Quintianus, who then persecuted her for her Christian faith.    He sent Agatha to Aphrodisia, the keeper of a brothel.

The madam finding her intractable, Quintianus sent for her, argued, threatened and finally had her put in prison.    Amongst the tortures she underwent was the cutting off of her breasts with pincers.    After further dramatic confrontations with Quintianus, represented in a sequence of dialogues in her passio that document her fortitude and steadfast devotion, Saint Agatha was then sentenced to be burnt at the stake but an earthquake saved her from that fate;  instead, she was sent to prison where St. Peter the Apostle appeared to her and healed her wounds.    Saint Agatha died in prison, according to the Legenda Aurea in “the year of our Lord two hundred and fifty-three in the time of Decius, the emperor of Rome.” 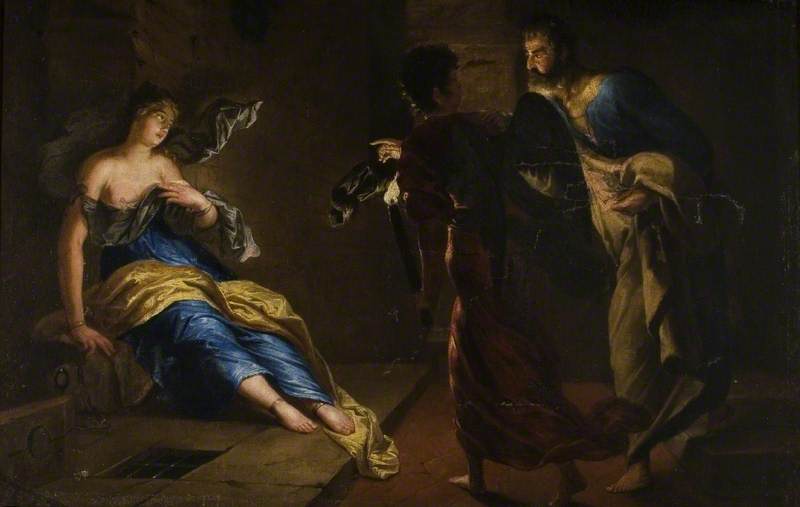 According to Maltese tradition, during the persecution of Roman Emperor Decius (AD 249–251), Agatha, together with some of her friends, fled from Sicily and took refuge in Malta. Some historians believe that her stay on the island was rather short and she spent her days in a rock hewn crypt at Rabat, praying and teaching the Christian Faith to children. After some time, Agatha returned to Sicily, where she faced martyrdom.    Agatha was arrested and brought before Quintanus, praetor of Catania, who condemned her to torture and imprisonment.    The crypt of St. Agatha is an underground basilica, which from early ages was venerated by the Maltese.    At the time of St. Agatha’s stay, the crypt was a small natural cave which later on, during the 4th or 5th century, was enlarged and embellished.

Saint Agatha is a patron saint of Malta, where in 1551 her intercession through a reported apparition to a Benedictine nun is said to have saved Malta from Turkish invasion.

Agatha is the patron saint of bell-founders because of the shape of her severed breasts and also of bakers, whose loaves were blessed at her feast day.    More recently, she has been venerated as patron saint of breast cancer patients.

She is claimed as the patroness of Palermo.    The year after her death, the stilling of an eruption of Mt. Etna was attributed to her intercession.    As a result, apparently, people continued to ask her prayers for protection against fire.

An annual festival to commemorate the life of Saint Agatha takes place in Catania, Sicily, from February 3 to 5.   The festival culminates in a great all-night procession through the city for which hundreds of thousands of the city’s residents turn out.

Festival of Saint Agatha in Catania (1915)
Basques have a tradition of gathering on Saint Agatha’s Eve (Basque: Santa Ageda bezpera) and going round the village.    Homeowners can choose to hear a song about her life, accompanied by the beats of their walking sticks on the floor or a prayer for the household’s deceased.    After that, the homeowner donates food to the chorus.