Novena to Our Lady of Lourdes – DAY SIX– 7 February (we Pray the Novena for our own intentions and for the sick, the infirm within our own communities but also for all those throughout the world who suffer, especially those who have no-one to pray for them in preparation for the Wold Day of the Sick on 11 February.)

DAY SIX
O glorious Mother of God,
so powerful under your special title of Our Lady of Lourdes,
to you we raise our hearts and hands
to implore your powerful intercession in obtaining
from the gracious Heart of Jesus
all the helps and graces necessary
for our spiritual and temporal welfare
and for the special favour we so earnestly seek in this novena.
(make your request)
O Lady of Bernadette,
with the stars of heaven in your hair and the roses of earth at your feet,
look with compassion upon us today as you did so long ago on Bernadette in the Grotto of Lourdes.
O Brilliant star of purity, Mary Immaculate,
Our Lady of Lourdes,
glorious in your assumption,
triumphant in your coronation,
show unto us the mercy of the Mother of God,
Virgin Mary, Queen and Mother,
be our comfort, hope, strength, and consolation. Amen. 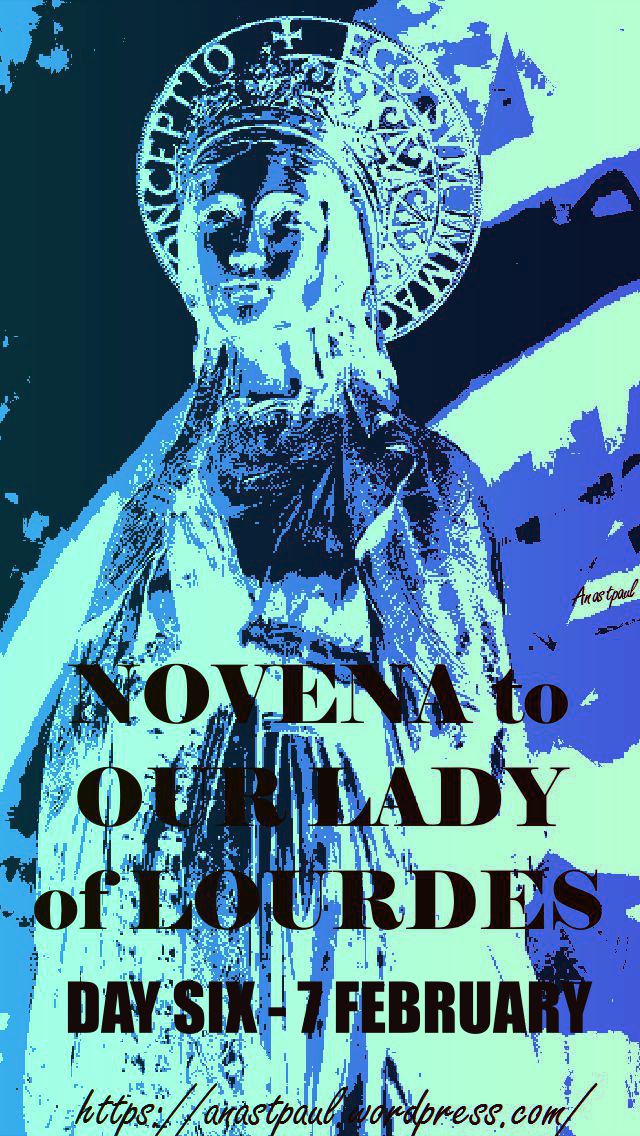 Thought for the Day – 7 February

Perhaps we wonder how we could possibly endure the sufferings that the martyrs suffered, such terrible and prolonged sufferings and where would we find the strength and endurance to suffer to death, for our faith?   The martyrs do not endure by their own strength and they are well aware of this.   If that time should ever come to us, the strength would be given us by God.   Believe it!

Our Lady, Queen of Martyrs and all Martyrs of the Faith, Pray for us! 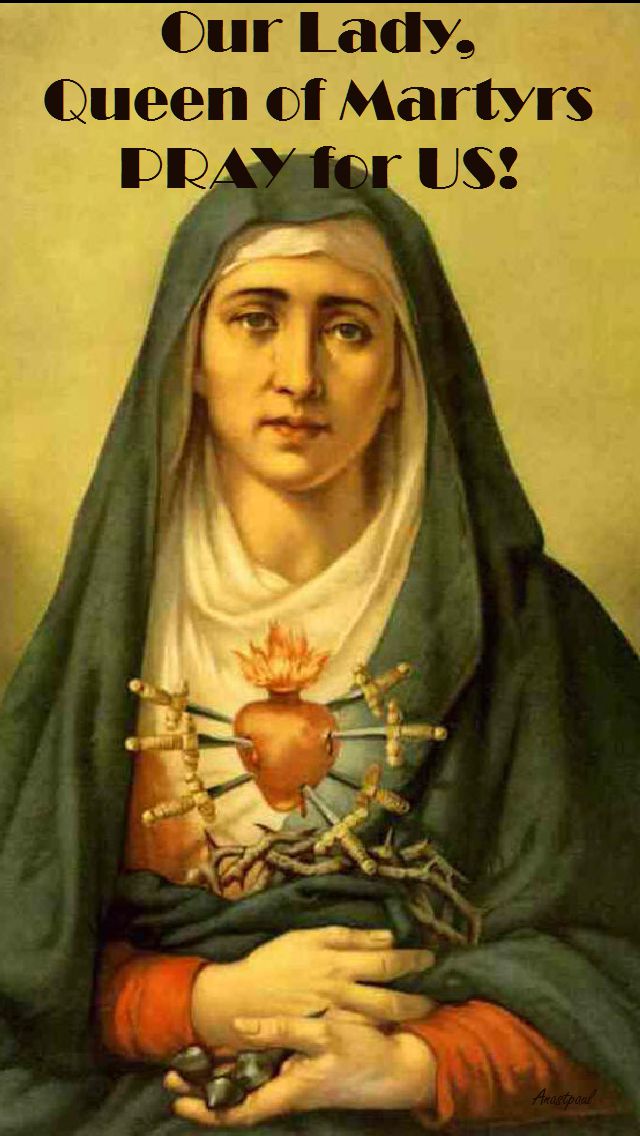 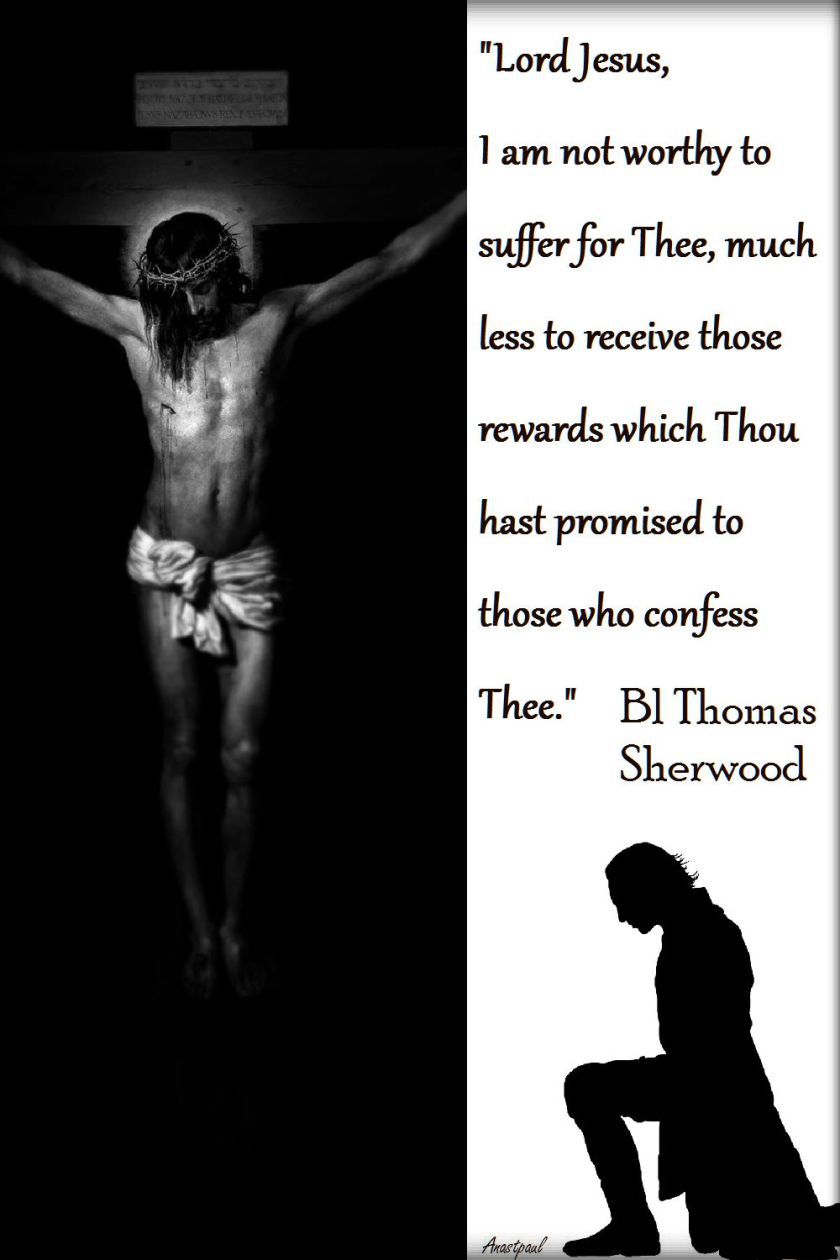 “Lord Jesus, I am not worthy to suffer for Thee, much less to receive those rewards which Thou hast promised to those who confess Thee.”

We know that God makes all things work together for the good of those who love him…….Romans 8:28

REFLECTION – “Do not allow yourselves to be overly saddened by the unfortunate accidents of this world.   You are not aware of the benefits that they bring and by what secret judgment of God they are arranged for the eternal joy of the Elect.”………..St John of the Cross

PRAYER – Father of wisdom, help me to accept all earthly misfortunes even without understanding them, with the sure knowledge that good will comes from them.  Let me never despair but trust in Your Providence that governs all things.   Bl Thomas Sherwood, I think of you and your acceptance of your fate in total love of our good God, please pray for me, amen. 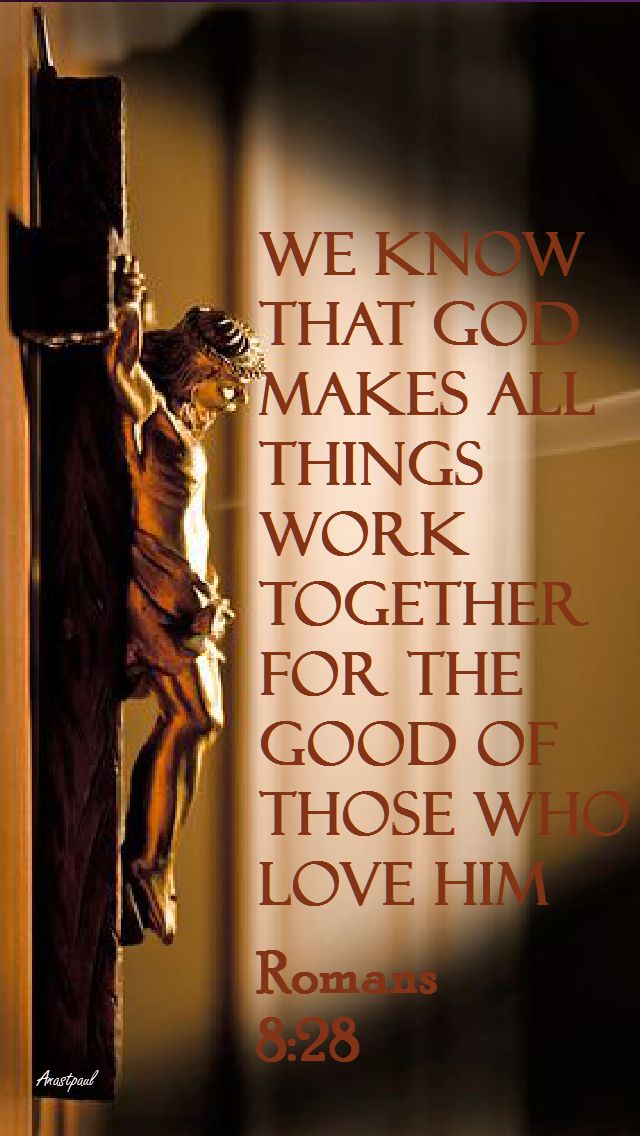 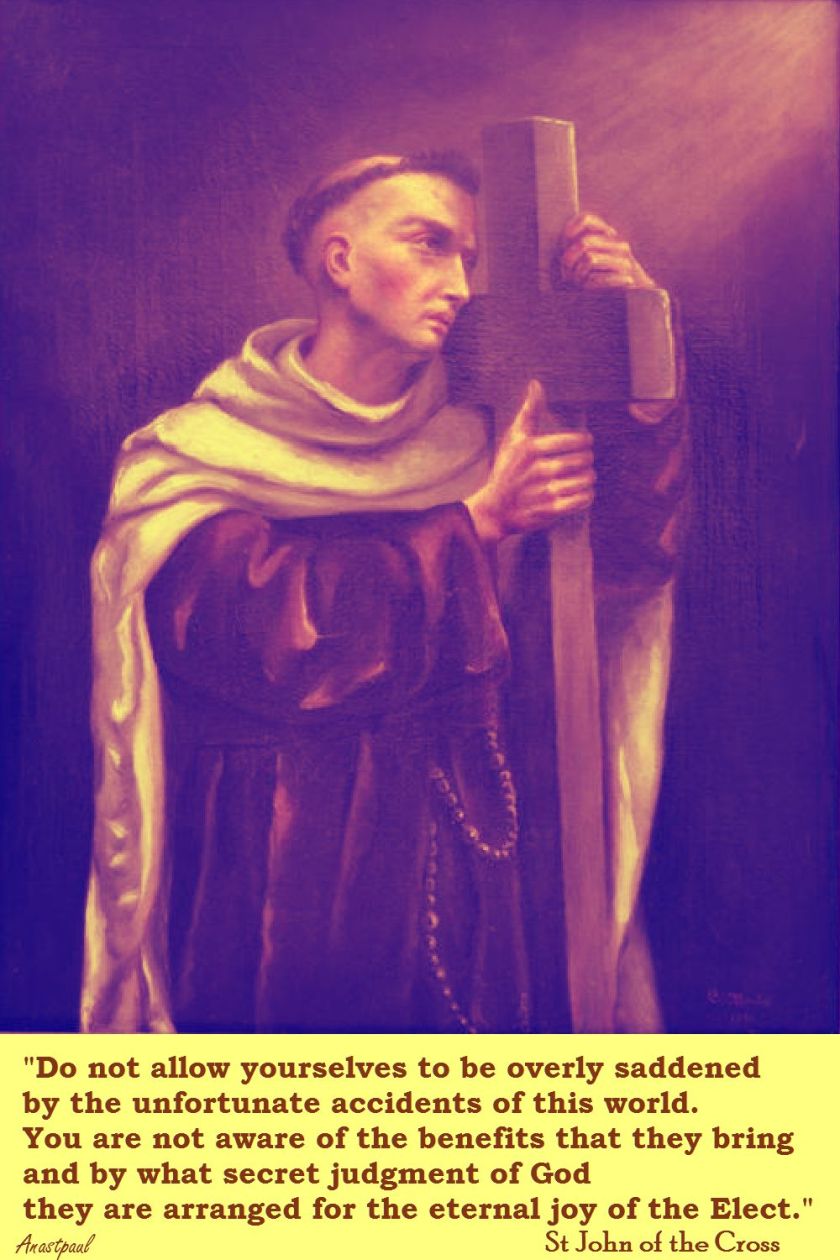 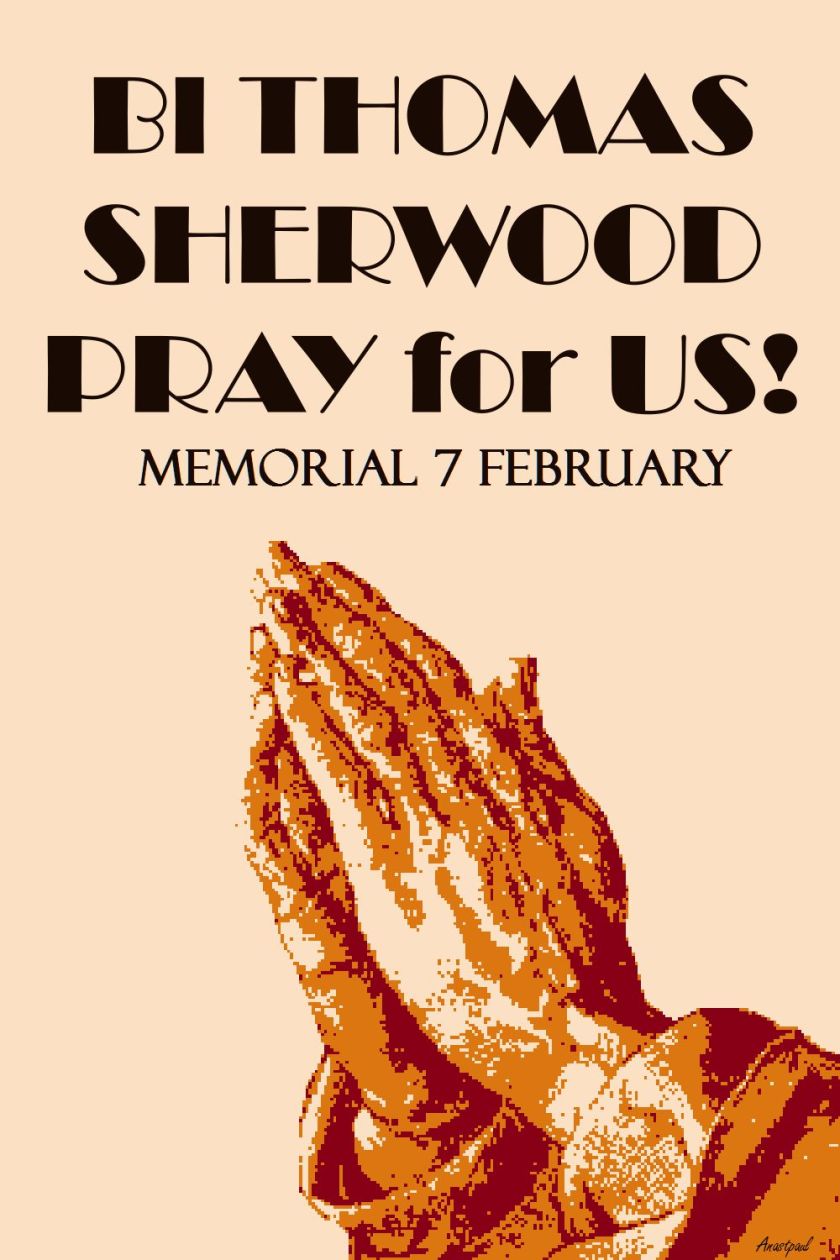 Show me, O Lord, Your mercy
and delight my heart with it.
Let me find You, whom I seek so longingly.
See, here is the man whom the robbers seized
and mishandled and left half dead on the road to Jericho.
O You who can what the kind-hearted Samaritan cannot:
Come to my aid! I am the sheep
who wandered in to the wilderness:
seek after me and bring me home again to Your fold.
Do with me what You will,
that all the days of my life
I may bide by You and praise You,
with all those who are in heaven with You
for all of eternity. Amen. 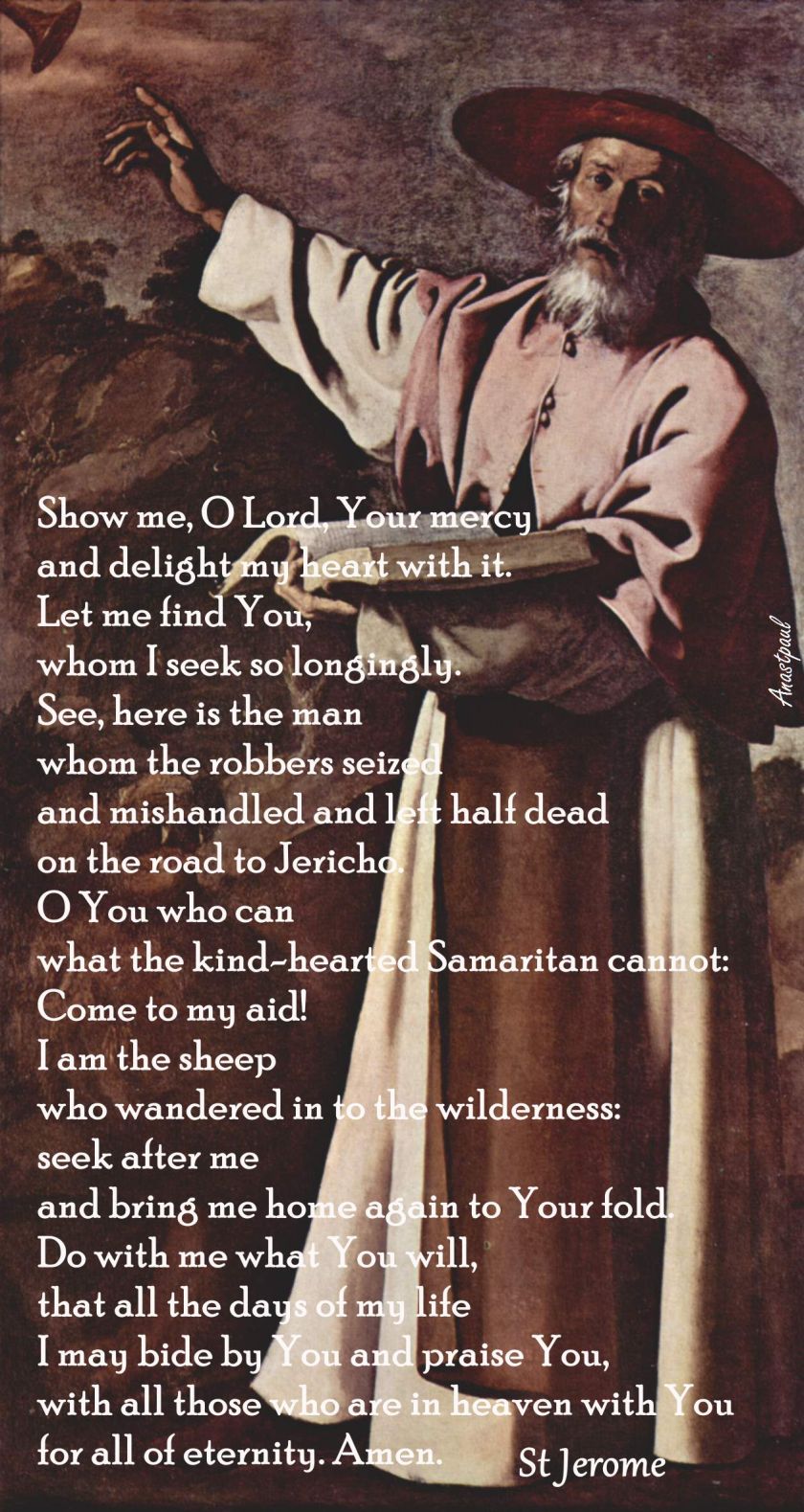 Saint of the day – 7 February – Bl Thomas Sherwood LAY MARTYR of the English Persecution under Elizabeth I (c. 1552–1579)

The days of Elizabeth I were difficult and frightening days for the Catholics of England.  This was the day of the martyrs, Catholics following in the footsteps of St Thomas More and St John Fisher, who died for their faith.   Most of these martyrs were priests, educated and ordained abroad, sent back to England to minister to their flock, declared outlaws and criminals by the government.

Bl Thomas was not a priest and he was not a religious.   He had planned to study for the priesthood but had not yet carried out his plan when he was arrested.

He was by profession a wool draper and was associated with other Catholic families, in particular the family of Catholic Lady Tregonwell, in whose home it seems, Mass was heard.   The son of Lady Tregonwell, who was a protestant, turned him in to the authorities, who sent him to the Tower of London on 17 November, 1577.   There he was tortured in order to discover where he heard Mass, who the priest was and the names of other Catholics with whom he associated.

St Thomas More’s son-in-law, William Roper, tried to send him money for medicine and food but the officer at the Tower would not permit money to be spent on anything but clean straw for him to sleep upon.   Blessed Thomas was 27 at the time of his arrest and his brother wrote an account of his sufferings and martyrdom.   We also possess the directions given to the lieutenant of the Tower from the privy council, ordering him to obtain information from Thomas on the rack.   After his execution, his mother was arrested and put in prison, where she died fourteen years later.

During his terrible sufferings all he said was:  “Lord Jesus, I am not worthy to suffer for Thee, much less to receive those rewards which Thou hast promised to Those who confess Thee.”   Three weeks after his death it was recorded in the daybook of Douay College, where he was enrolled and awaited:  “On the first of March, Mr Lowe returned to us from England bringing news that a youth, named Thomas Sherwood, had suffered for his confession of the Catholic Faith, not only imprisonment, but torture and death itself.” 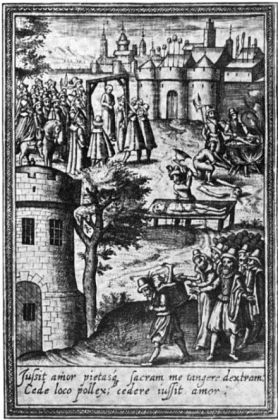 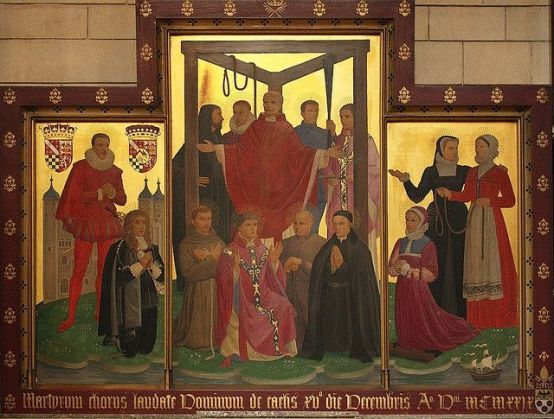