HOW TO AVOID PURGATORY By Fr. Paul O’Sullivan O.P.

For those who have not read this little book and to refresh myself, I will be posting the entire book in daily doses.  (To read later find in the Purgatory Category).

The Fourth Means by which we can lessen our time in Purgatory, or avoid it altogether, is by frequent Confession, Communion and daily assistance at Mass.

Confession applies to our souls the Precious Blood of Christ, wipes out our sins, gives us light to see their malice, fills us with horror of sin and above all, it gives us strength to avoid it.

In Holy Communion we receive the God of infinite mercy and love, the God of all sanctity, who comes expressly to pardon our sins and help us to sin no more.   He visited the house of Zaccheus once, and in that one visit, Zaccheus obtained complete pardon of all his sins How is it possible that the same God of goodness and sweetness can come, not into our houses but into our very hearts in Holy Communion and not give us the same and even greater graces.   He visited Zaccheus once, He visits us every day if we allow Him. Many, alas, never feel, never grasp the immense joys and consolation of Holy Communion.

The Mass is identical with the Sacrifice of Calvary, in its essence, in its value, in the graces it bestows.    The Sacrifice of Calvary was sufficient to save all the world, millions and millions of souls and is also sufficient to save countless other sinful worlds, had they existed.    By assisting at Mass, we can apply all these oceans of graces to our own souls and that not once, but every day.

Let us go to Mass and Holy Communion every day.   We can do nothing better.   One day with Mass and Communion is worth a hundred days without them.

Reflection – “We cannot escape punishment, here or hereafter; we must take our choice, whether to suffer and mourn a little now, or much then.”

“And then, alas! the truth flashed upon him; he uttered a great and bitter cry, when it was too late. It would have been well, had he uttered it before he came for the blessing, not after it. He repented when it was too late—it had been well if he had repented in time. So I say of persons who have in any way sinned. It is good for them not to forget that they have sinned. It is good that they should lament and deplore their past sins. Depend upon it, they will wail over them in the next world, if they wail not here. Which is better, to utter a bitter cry now or then?—then, when the blessing of eternal life is refused them by the just Judge at the last day, or now, in order that they may gain it? Let us be wise enough to have our agony in this world, not in the next. If we humble ourselves now, God will pardon us then. We cannot escape punishment, here or hereafter; we must take our choice, whether to suffer and mourn a little now, or much then.”
(Blessed John Henry Newman)

Loving Father,
may I live this Lent as an unceasing act of love for You.
Let me grow in understanding of the riches hidden in Christ.
In my prayer, grant me a spirit to see what must be done
and the strength to do what is right.
Make me radiant in Your presence
with the strength of my yearning for You.
By my fasting, fortify my resolve to carry out Your loving commands.
Bless me with an increase in devoutness of life so that I may be found steadfast in faith.
Any by my almsgiving, renew and purify my heart so that I may hold to the
things that eternally endure.
Help me to repent of my sins now and make reparation throughout
this Lenten season and each day thereafter.
United with your Son,
who makes His way to Calvary,
I offer You my intentions
(Mention your special intention)
Amen 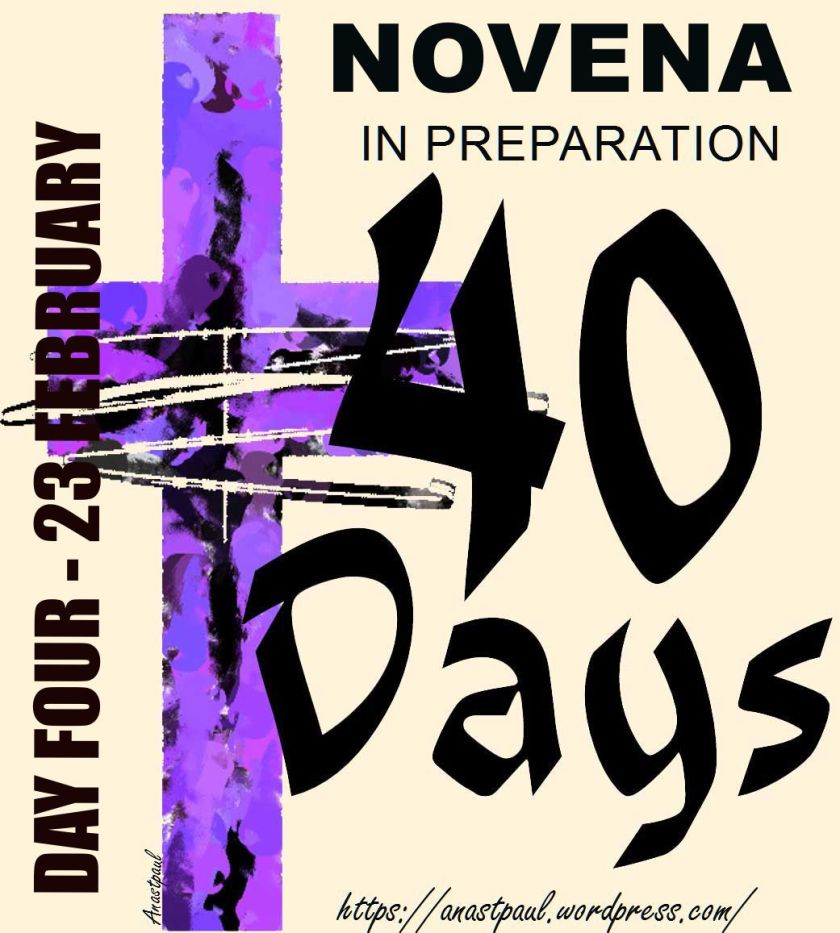 Thought for the Day – 23 February

We may not be required to give our lives for our faith but we all have to suffer something for our beliefs and our fidelity. It is when things are difficult that faith is really faith. A faith that is good only in good times is scarcely faith at all. We are all called to witness to our faith in some way.   Polycarp was recognised as a Christian leader by all Asia Minor Christians—a strong fortress of faith and loyalty to Jesus Christ.   His own strength emerged from his trust in God, even when events contradicted this trust.   Living among pagans and under a government opposed to the new religion, he led and fed his flock.   Like the Good Shepherd, he laid down his life for his sheep and kept them from more persecution in Smyrna.   He summarised his trust in God just before he died: “Father… I bless Thee, for having made me worthy of the day and the hour…” (Acts of Martyrdom, Chapter 14).

“Eighty and six years have I served Christ,
nor has He ever done me any harm.
How, then, could I blaspheme my King who saved Me?….
I bless Thee for deigning me worthy of this day
and this hour that I may be among Thy martyrs
and drink the cup of my Lord Jesus Christ.”

“Let us, therefore, foresake the vanity of the crowd
and their false teachings and turn back to the word
delivered to us from the beginning.”

“You threaten me with fire which burns for an hour
and after a little is extinguished
but are ignorant of the fire of the coming judgment
and of eternal punishment, reserved for the ungodly.” 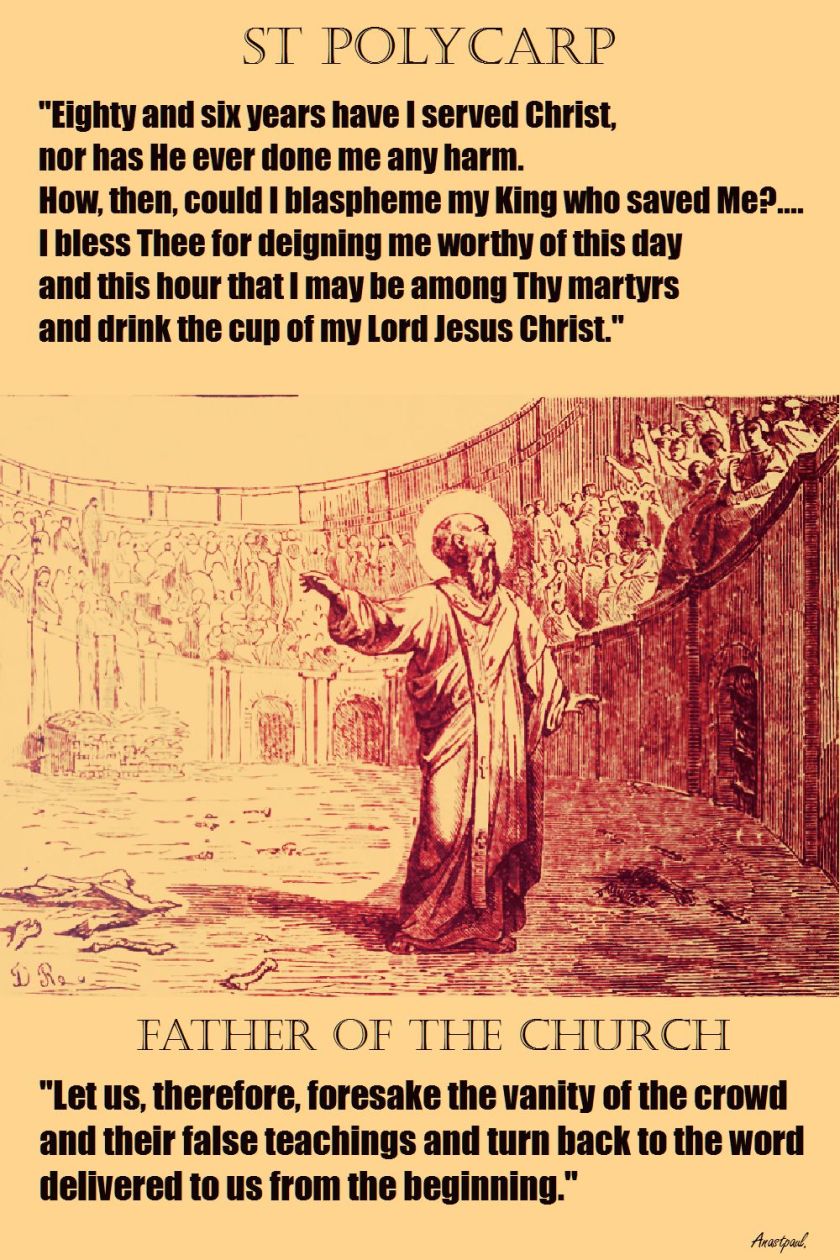 There is a time and judgment for everything………Eccl 8:6

REFLECTION – “Stand fast, therefore, in this conduct and follow the example of the Lord, firm and unchangeable in faith, lovers of the brotherhood, loving each other, united in truth,’ helping each other with the mildness of the Lord, despising no man.”…………..St Polycarp

PRAYER – God of goodness, let me never allow an opportunity for good to be wasted. Help me take advantage of every moment at my disposal to do good.   St Polycarp pray for us, amen.

May God the Father
and the Eternal High Priest Jesus Christ,
build us up in faith and truth and love
and grant to us our portion among the saints
with all those who believe on our Lord Jesus Christ.
We pray for all saints,
for kings and rulers,
for the enemies of the Cross of Christ
and for ourselves we pray
that our fruit may abound
and we may be made perfect
in Christ Jesus our Lord. Amen

Polycarp is regarded as a saint and Church Father in the Eastern Orthodox, Oriental Orthodox, Catholic, Anglican, and Lutheran churches. His name ‘Polycarp’ means ‘much fruit’ in Greek.

It is recorded by Irenaeus, who heard him speak in his youth, and by Tertullian, that he had been a disciple of John the Apostle.    Saint Jerome wrote that Polycarp was a disciple of John and that John had ordained him bishop of Smyrna.

With Clement of Rome and Ignatius of Antioch, Polycarp is regarded as one of three chief Apostolic Fathers.   The sole surviving work attributed to his authorship is his Letter to the Philippians; it is first recorded by Irenaeus of Lyons.

According to St Irenaeus, Polycarp was a companion of Papias, another “hearer of John” as Irenaeus interprets Papias’ testimony and a correspondent of Ignatius of Antioch.   Ignatius addressed a letter to him, and mentions him in his letters to the Ephesians and to the Magnesians.

Irenaeus regarded the memory of Polycarp as a link to the apostolic past. He relates how and when he became a Christian, and in his letter to Florinus stated that he saw and heard Polycarp personally in lower Asia. Irenaeus wrote to Florinus:

“I could tell you the place where the blessed Polycarp sat to preach the Word of God.   It is yet present to my mind with what gravity he everywhere came in and went out;  what was the sanctity of his deportment, the majesty of his countenance;  and what were his holy exhortations to the people.   I seem to hear him now relate how he conversed with John and many others who had seen Jesus Christ, the words he had heard from their mouths.”

In particular, he heard the account of Polycarp’s discussion with John and with others who had seen Jesus.   Irenaeus also reports that Polycarp was converted to Christianity by apostles, was consecrated a bishop and communicated with many who had seen Jesus.   He repeatedly emphasizes the very great age of Polycarp.   Polycarp kissed the chains of Ignatius when he passed by Smyrna on the road to Rome for his martyrdom.

Polycarp occupies an important place in the history of the early Christian Church.   He is among the earliest Christians whose writings survived.   Saint Jerome wrote that Polycarp was a “disciple of the apostle John and by him ordained bishop of Smyrna”.   He was an elder of an important congregation which was a large contributor to the founding of the Christian Church.
Irenaeus, who had heard him preach in his youth, said of him: “a man who was of much greater weight and a more steadfast witness of truth, than Valentinus and Marcion, and the rest of the heretics”. Polycarp had learned from apostle John to flee from those who change the divine truth. One day he met in the streets of Rome the heretic Marcion who, resenting that Polycarp did not greet him, said: “Do you know me?” The saint replied: “Yes, I know you, the first-born of Satan.”    Polycarp lived in an age after the deaths of the apostles, when a variety of interpretations of the sayings of Jesus were being preached.   His role was to authenticate orthodox teachings through his reputed connection with the apostle John: “a high value was attached to the witness Polycarp could give as to the genuine tradition of old apostolic doctrine”, Wace commented, “his testimony condemning as offensive novelties the figments of the heretical teachers”.   Irenaeus states (iii. 3) that on Polycarp’s visit to Rome, his testimony converted many disciples of Marcion and Valentinus.

The story of Polycarp’s martyrdom is the earliest recorded account of a Christian martyr. Polycarp was seized for being a Christian.   Persecution and death would not tear him away from Jesus now.   Polycarp was led into the stadium of Smyrna.   The crowd demanded that he be left to the lions, but instead he was sentenced to death by fire.   An eyewitness account claims that the flames didn’t harm him.   He was finally killed by the sword, and his body was burned.

The community of believers celebrated the anniversary of Polycarp’s death with great joy, for in him they had seen an outstanding example of love and patience.   He had held strong and had won the treasure of eternal life.   Polycarp is remembered as an Apostolic Father, one who was a disciple of the apostles. 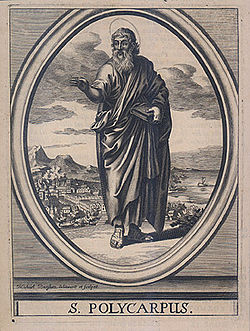 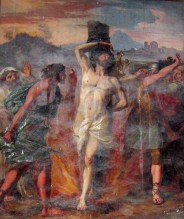 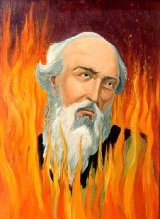