Lent is a new beginning, a path leading to the certain goal of Easter, Christ’s victory over death. This season urgently calls us to conversion. Christians are asked to return to God “with all their hearts” (Joel 2:12), to refuse to settle for mediocrity and to grow in friendship with the Lord. Jesus is the faithful friend who never abandons us.  Even when we sin, he patiently awaits our return; by that patient expectation, he shows us his readiness to forgive (cf. Homily, 8 January 2016).

Lent is a favorable season for deepening our spiritual life through the means of sanctification offered us by the Church: fasting, prayer and almsgiving. At the basis of everything is the word of God, which during this season…

HOW TO AVOID PURGATORY By Fr. Paul O’Sullivan O.P.

For those who have not read this little book and to refresh myself, I will be posting the entire book in daily doses.  (To read later find in the Purgatory Category).

The Seventh Means of avoiding Purgatory is Extreme Unction:  God Himself has
given us a Sacrament, the end of which is to take us directly to Heaven.
This Sacrament is Extreme Unction, which according to St. Thomas and St.
Albert was instituted especially to obtain for us the grace of a holy and
happy death and to prepare us for immediate entrance into Heaven.

Many Catholics do not understand this most consoling doctrine and because
they do not understand it, they prepare themselves insufficiently for the
reception of Extreme Unction and so lose many of its great graces.

Every Sacrament properly received produces its effect.    Baptism cleanses us
from Original Sin and any other actual sins that may have been committed by
adults before receiving the Sacrament.

The Sacrament of Holy Orders gives a priest all his tremendous powers.
Matrimony makes man and woman husband and wife.   In the same way Extreme
Unction, if devoutly received, prepares the dying Christian for immediate
entrance into Heaven, thus delivering him from Purgatory.

How foolish it is, therefore, to put off receiving this Sacrament until
very late, when the dying person is too exhausted to receive it with full
knowledge of what he is doing and with due fervour and devotion.   The moment
of death is the supreme moment in our lives.   It is the moment which decides
our fate for all Eternity.

Let us use every means in our power to secure a happy and holy death,
especially by receiving most devoutly and as soon as possible, Extreme
Unction.   Leave your instructions with those closest to you – explain your dying needs and your funeral wishes too!

REFLECTION – “LET US JUDGE OURSELVES, that we be not judged.
Let us afflict ourselves, that God may not afflict us.”

“And be sure of this: that if He has any love for you,
if He sees aught of good in your soul, He will afflict you,
if you will not afflict yourselves. He will not let you escape.
He has ten thousand ways of purging those whom He has chosen,
from the dross and alloy with which the fine gold is defaced.
He can bring diseases on you, or can visit you with misfortunes,
or take away your friends, or oppress your minds with darkness,
or refuse you strength to bear up against pain when it comes upon you.
He can inflict on you a lingering and painful death.
He can make “the bitterness of death pass” not.
We, indeed, cannot decide in the case of others,
when trouble is a punishment and when not;
yet this we know – that all sin brings affliction.
We have no means of judging others
but we may judge ourselves.
LET US JUDGE OURSELVES, that we be not judged.
Let us afflict ourselves, that God may not afflict us.
Let us come before Him with our best offerings,
that He may forgive us.” (Blessed John Henry Newman) 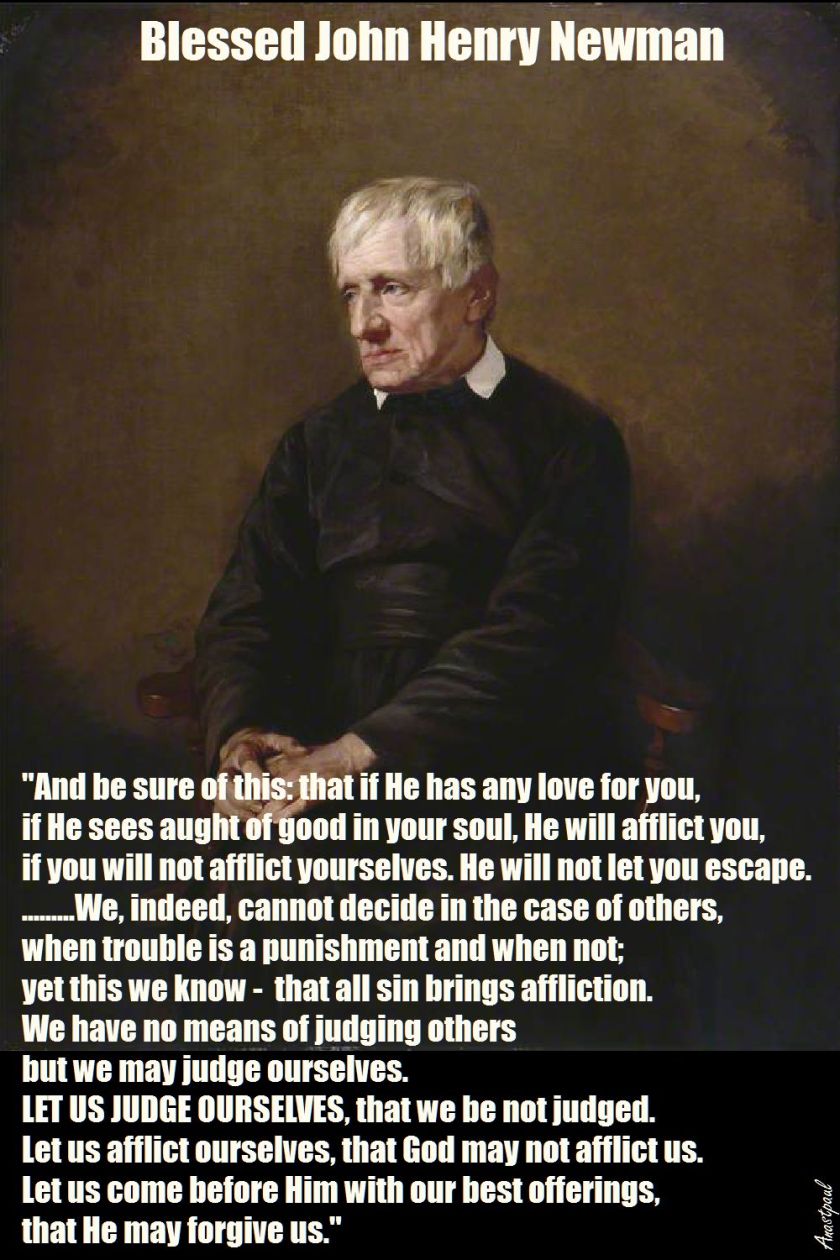 Today Lord I choose life,
I choose Your love and the challenge to live it and share it,
I choose hope, even in moments of darkness,
I choose faith, accepting You as Lord and God,
I choose to let go of some part of my burdens, day by day handing them over to You,
I choose to take hold of Your strength and power ever more deeply in my life.
I choose to judge and afflict myself.
I choose repentance and reparation and suffering, for all my sins
and those of all the world.
Forgive me my Lord!
May this truly be for me a time of new life, of change, challenge and growth.
May I come to Easter with a heart open to dying with You
and rising to Your new life, day by day. Help me to repent of my sins now and make reparation throughout
this Lenten season and each day thereafter.
United with your Son,
who makes His way to Calvary,
I offer You my intentions
(Mention your special intention)
Amen. 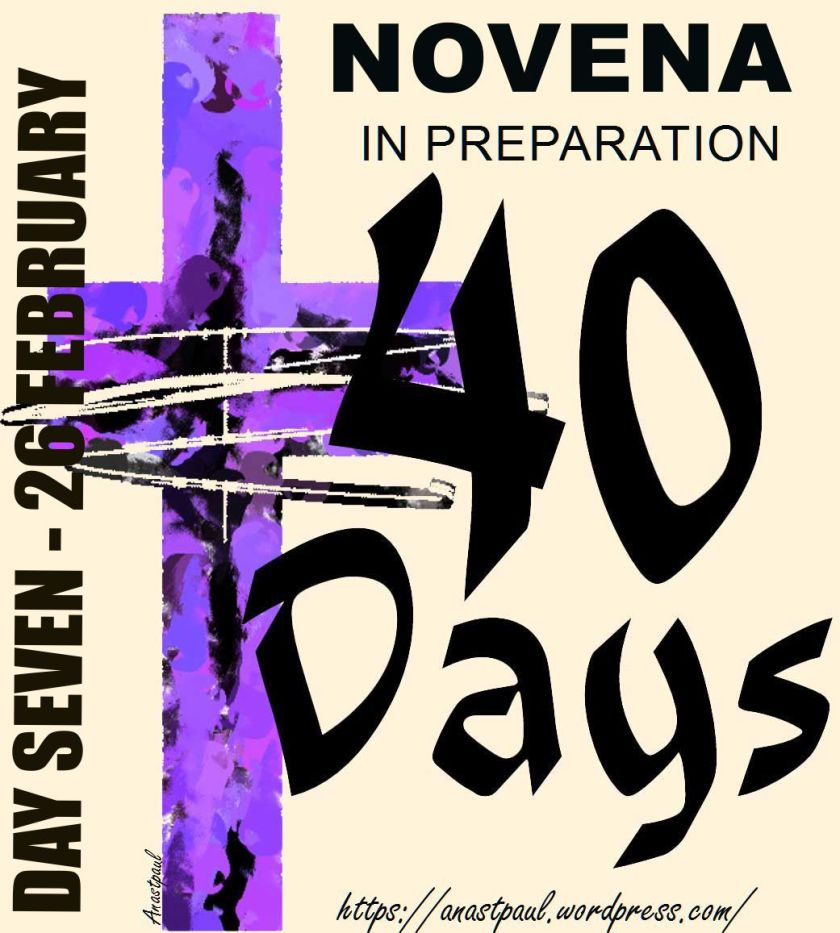 Thought for the Day – 26 February

The life of Blessed Isabella suggests to us that our human weaknesses, even those of the body, can be overcome by the grace of God. Isabelle, despite pressure to do otherwise for personal and political gain, resisted the pressure of the Courts of France to marry, remaining a virgin and consecrating herself to God.   She sought out the spiritual direction she needed, listened for the call of the Lord and followed it without question.   So eager to rejoin her Maker, she was rewarded with knowledge of when that would happen, which she awaited with joy.    Blessed Isabella of France inspires us to examine our lives, identifying those small barriers we hide behind, rather than serving God.   Whether it be work, sickness, fatigue, or financial security, we all have many reasons—many excuses—to focus on ourselves, rather than on the Lord and through Him, on those in need around us.   This is a perfect opportunity to broaden our view from ourselves to those around us, breaking down our barriers and embracing the Lord in those we serve.   Isabella made sure that nothing would keep her from God and she walked a very singular path to Him.   She is a lesson in determination – something we can achieve in our own quest for complete holiness!

Bl Isabella of France, pray for us!

Quote of the Day – 26 February

Soul of Christ, sanctify me
Body of Christ, save me
Blood of Christ, inebriate me
Water from the side of Christ, wash me
Passion of Christ, strengthen me
Good Jesus, hear me
Within Your wounds, shelter me
from turning away, keep me
From the evil one, protect me
At the hour of my death, call me
Into Your presence lead me
to praise You with all Your saints
Forever and ever, amen 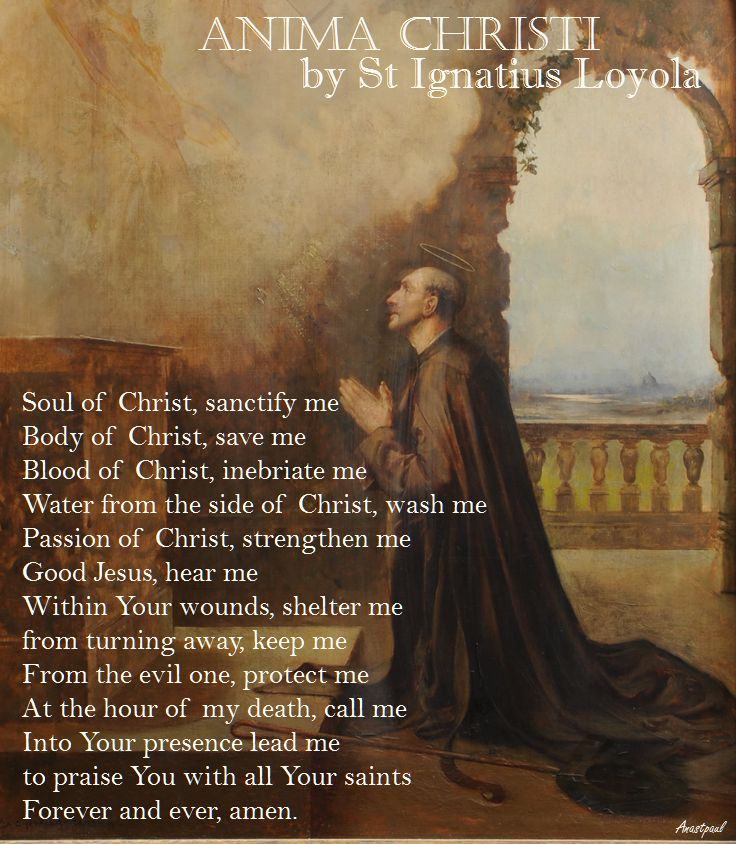 Saint of the Day – 26 February – Bl Isabella/Isabelle of France (1224-1270) – Virgin/Princess and Lay Religious, Founder and Apostle of Mercy – Patron of the sick

Isabella was the sister of King Saint Loius IX of France. Her mother, the saintly Queen Blance, bore this child special affection because, after the death of her husband, Isabella was the only daughter still living. Her cousin was King Saint Fernando III of Castile and Leon. Isabella was endowed with remarkable gifts, and special attention was paid to educate her in the requirements of her high position. She knew Latin perfectly and could read the writings of the Gathers of the Church in that language. She was, however, no less capable in accomplishments that are peculiarly feminine. With consummate artistry she embroidered vestments for divine services, and took great pleasure in working for the poor and the sick.

The princess loved and honored her saintly brother Louis, who was her senior by ten years and had then been king for many a year. But her love for God was still greater. One day she was knitting a new-fashioned nightcap. The king asked her to give it to him when finished.

“No,” she said, “this is the first of its kind and I must make it for my Savior Jesus Christ.”

Accordingly, she gave it to a poor sick person, and then made another for the king.

Her life in the royal palace was as retired as that of a nun in her convent. Hardly ever did she speak at mealtime. The choicest food she sent to the sick, and she ate so little even of the ordinary food that it was remarkable how she could live. Blessed Isabella of France fasted three days every week. All the court considered the princess a saint. One of the court ladies, who wrote her life, says,

“We beheld in her a mirror of innocence, and at the same time an admirable model of penance, a lily of purity, a fragrant rose of patience and self-renunciation, and endless fountain of goodness and mercy.”

Isabella’s only desire was to belong entirely to God, and so she took the vow of perpetual virginity. However, Emperor Frederick II sought her consent for marriage with his eldest son Conrad. Her mother, her brother, the king, and even Pope Innocent IV would have liked to see the marriage take place for the good of the State and the Church. But Isabella wrote the Holy Father a letter in which she expressed such high regard for consecrated virginity and so strong a desire to persevere in it, that the pope praised her highly and encouraged Blessed Isabella of France in her noble sentiments.

When her mother died, Isabella wished to withdraw from the court in order to consecrate herself entirely to God in a convent. With the king’s assistance she built a convent for the Poor Clares at Longchamps near Paris, and then with several ladies of the court she obtained admission. At the request of the Holy Father, the strict rule of St Clare was mitigated for this community by St Bonaventure, who was minister general of the Franciscan Order at that time, and the modified rule was confirmed anew by Pope Urban IV.

At Isabella’s request, the convent was named for the Humility of Our Blessed Lady. Blessed Isabella of France lived there nine years and desired nothing more than to be a humble subject although she surpassed everyone in sanctity. At her death in 1270 angels were heard singing. Several miracles occurred also after her death, and so Pope Leo X beatified her. 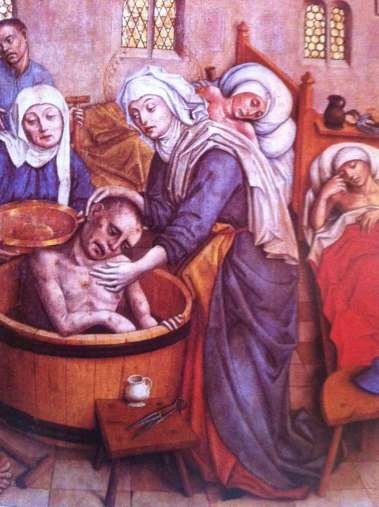