Saint of the Day – 21 April – St Anselm of Canterbury- Doctor of the Church (1033-1109) Doctor magnificus (Magnificent Doctor); Doctor Marianus (Marian Doctor), “Father of Scholasticism” – Monk, Prior, Abbott, Archbishop, Theologian, Philosopher – Attributes – His mitre, pallium, and crozier, his books, Benedictine monk admonishing an evil-doer, archbishop, performing an exorcism on a monk, with Our Lady appearing before him, a ship, representing the spiritual independence of the Church. 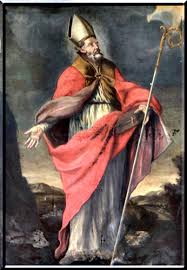 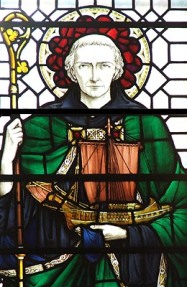 Anselm was born in or around Aosta in Upper Burgundy sometime between April 1033 and April 1034. At the age of fifteen, Anselm desired to enter a monastery but, failing to obtain his father’s consent, he was refused by the abbot. The illness he then suffered has been considered a psychosomatic effect of his disappointment but upon his recovery he gave up his studies and for a time lived a carefree life.

Following the death of his mother, probably at the birth of his sister Richera, Anselm’s father repented his earlier lifestyle but professed his new faith with a severity that the boy found likewise unbearable. Anselm, at age 23, left home with a single attendant crossed the Alps and wandered through Burgundy and France for three years. His countryman Lanfranc of Pavia was then prior of the Benedictine abbey of Bec; attracted by the fame of his fellow countryman, Anselm reached Normandy in 1059 ] After spending some time in Avranches, he returned the next year. His father having died, he consulted with Lanfranc as to whether to return to his estates and employ their income in providing alms or to renounce them, becoming a hermit or a monk at Bec or Cluny. Professing to fear his own bias, Lanfranc sent him to Maurilius, the archbishop of Rouen, who convinced him to enter the abbey as a novice at the age of 27. Probably in his first year, he wrote his first work on philosophy, a treatment of Latin paradoxes called the Grammarian. Over the next decade, the Rule of Saint Benedict reshaped his thought.

Because of the physical closeness and political connections, there was frequent travel and communication between Normandy and England and Anselm was in repeated contact with Church officials in England.    He was chosen as reluctant Archbishop of Canterbury, England in 1092; officials had to wait until he too sick to argue in order to get him to agree.

As bishop he fought King William Rufus’s encroachment on ecclesiastical rights and the independence of the Church, refused to pay bribes to take over as bishop and was exiled for his efforts.    He travelled to Rome, Italy and spent part of his exile as an advisor to Pope Blessed Urban II, obtaining the pope’s support for returning to England and conducting Church business without the king’s interference.    He resolved theological doubts of the Italo-Greek bishops at Council of Bari in 1098.

In 1100 King Henry II invited Anselm to return to England but they disputed over lay investiture and Anselm was exiled again only to return in 1106 when Henry agreed not to interfere with the selection of Church officials.    Anselm opposed slavery and obtained English legislation prohibiting the sale of men.   He strongly supported celibate clergy and approved the addition of several saints to the liturgical calendar of England.

He died on Holy Wednesday, 21 April 1109.[101] His remains were translated to Canterbury Cathedral[116] and laid at the head of Lanfranc at his initial resting place to the south of the Altar of the Holy Trinity (now St Thomas’s Chapel).[119] During the church’s reconstruction after the disastrous fire of the 1170s, his remains were relocated,[119] although it is now uncertain where.

Anselm was one of the great philosophers and theologians of the middle ages, and a noted theological writer.   He was far more at home in the monastery than in political circles, but still managed to improve the position of the Church in England.    Counsellor to Pope Gregory VII. Chosen a Doctor of the Church in 1720 by Pope Clement XI. 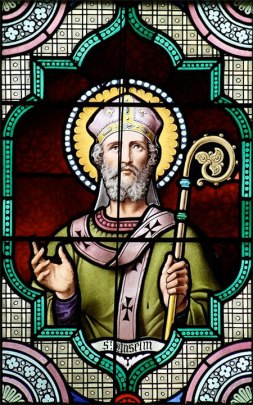 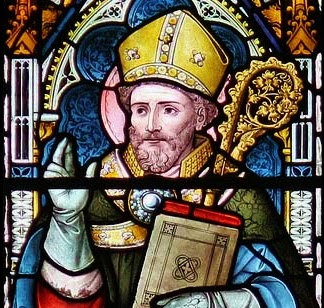 The life of St Anselm told in 16 medallions in a stained-glass window in Quimper Cathedral, Brittany, in France