Saint of the Day – 6 September – St Magnus of Füssen – Religious Priest, Monk, Abbot, Missionary, Spiritual student of Saint Columban and Saint Gall at Arbon (part of modern Switzerland) (Died in c 666? or 722? at the monastery at Füssen, Bavaria (in modern Germany) of natural causes).   Patronages –  against caterpillars,• against hail or hailstorms,• against lightning,• against snakes,• against vermin,• for protection of crops.

St Magnus of was both a monk and a missionary. An interesting story involves him bringing reconciliation between St Gall and his master St Columban.   He is also venerated as one of the Holy Helpers invoked in time of plague such as the Black Death.

Monk of St Gall
Magnus was a monk at St Gall.   One moving story involving him is that, on learning of the death of Columbanus whom Gall had refused to accompany to Bobbio in Italy, Gall sent Magnus to pray at Columbanus’s grave.   Magnus returned with St Columbanus’s staff which on his deathbed Columbanus had instructed to be given to Gall as a gesture of reconciliation in the quarrel which a few years before had separated them.   Magnus is said to have succeeded Gall after his death.

Missionary
Invited by a priest of Augsburg, Magnus went with the support of Bishop Wichbert of that diocese to preach to the pagan people of the Allgäu region of Bavaria.   When he was left alone, Wichbert sent some young clerics to help him and these formed a monastic community later known as Sankt-Mung at Füssen, in Bavaria. Magnus helped the locals clear the land for cultivation and began a mining industry in a nearby mountain.

Death and influence
Magnus died after 26 years of missionary work and his relics were returned to St Gall. He is usually represented as treading on serpents.   He is also named as one of the fourteen Holy Helpers invoked against storms, insects, dragons and other disasters, such as the Black Death. 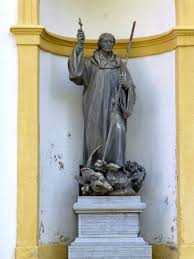