This invitation from the Father is very important. We, the disciples o  f Jesus, are called to be people who listen to His voice and take His words seriously.   To listen to Jesus, we must be close to Him, to follow Him, like the crowd in the Gospel who chase Him through the streets of Palestine.

Jesus did not have a teaching post or a fixed pulpit, He was an itinerant teacher, who proposed His teachings, teachings given to Him by the Father, along the streets, covering distances that were not always predictable or easy.   Follow Jesus in order to listen to Him.   But also let us listen to Jesus in His written Word, in the Gospel.   I pose a question to you: do you read a passage of the Gospel everyday?   Yes, no… yes, no… half of the time … some yes, some no.   It is important!   Do you read the Gospel?   It is so good;  it is a good thing to have a small book of the Gospel, a little one and to carry in our pocket or in our purse and read a little passage in whatever moment presents itself during the day.   In any given moment of the day I take the Gospel from my pocket and I read something, a short passage. Jesus is there and He speaks to us in the Gospel!   Ponder this. It’s not difficult, nor is it necessary to have all four books: one of the Gospels, a small one, with us.   Let the Gospel be with us always, because it is the Word of Jesus in order for us to be able to listen to Him.

From the event of the Transfiguration I would like to take two significant elements that can be summed up in two words:  ascent and descent.   We all need to go apart, to ascend the mountain in a space of silence, to find ourselves and better perceive the voice of the Lord.   This we do in prayer.   But we cannot stay there!   Encounter with God in prayer inspires us anew to “descend the mountain” and return to the plain where we meet many brothers weighed down by fatigue, sickness, injustice, ignorance, poverty both material and spiritual.   To these brothers in difficulty, we are called to bear the fruit of that experience with God, by sharing the grace we have received.
And this is curious.   When we hear the Word of Jesus, when we listen to the Word of Jesus and carry it in our heart, this Word grows.   Do you know how it grows?   By giving it to the other!   The Word of Christ grows in us when we proclaim it, when we give it to others!   And this is what Christian life is.   It is a mission for the whole Church, for all the baptised, for us all – listen to Jesus and offer Him to others.
Do not forget!   this week listen to Jesus!   And think about the matter of the Gospel, will you?   Will you do this?   Then next Sunday you tell me if you have done this, that you have a little book of the Gospel in your pocket or in your purse to read in little stages throughout the day.

And now let us turn to our Mother Mary and entrust ourselves to her guidance in pursuing with faith and generosity this path of …., learning a little more how to “ascend” with prayer and listen to Jesus and to “descend” with brotherly love, proclaiming Jesus.

It is indeed good to be here, as you have said, Peter.   It is good to be with Jesus and to remain here for ever. What greater hap  piness or higher honour could we have than to be with God, to be made like Him and to live in His light?

Therefore, since each of us possesses God in his heart and is being transformed into His divine image, we also should cry out with joy:
It is good for us to be here – here where all things shine with divine radiance, where there is joy and gladness and exultation; where there is nothing in our hearts but peace, serenity and stillness;  where God is seen.
For here, in our hearts, Christ takes up His abode together with the Father, saying as He enters:  Today salvation has come to this house.

With Christ, our hearts receive all the wealth of His eternal blessings and there where they are stored up for us in Him, we see reflected as in a mirror both the first fruits and the whole of the world to come. 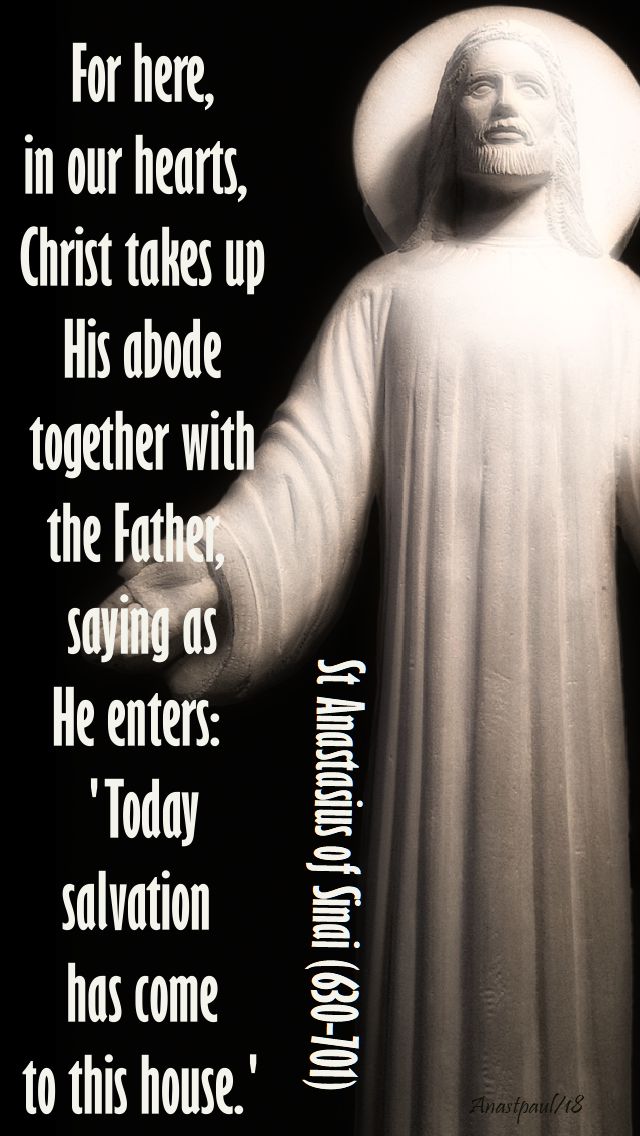 One Minute Reflection 6 August – Feast of the Transfiguration of the Lord – Today’s Gospel: Mark 9:2–10

And a cloud overshadowed them, and a voice came out of the cloud, “This is my beloved Son; listen to him.”...Mark 9:7

REFLECTION – …”And the path of Jesus is another, Jesus triumphs through humiliation, the humiliation of the cross.   But, as this would be a scandal for them, Jesus lets them see what will come next, what is after cross, what awaits us, all of us.   This glory and this heaven.   And this is very beautiful, very beautiful because Jesus and this feels good, always prepares us for the test.   In one way or another but this is the message.   It always prepares us.   It gives us the strength to go on in moments of trial and to win with its strength.   Jesus does not leave us alone in the trials of life, He always prepares us, He helps us as He prepares these (the disciples) with the vision of His glory.   And so they remembered this moment, to bear the weight of the humiliation.   And this is the first thing that the church teaches, that Jesus always prepares us and rehearses with us.   He does not leave us alone, never!
“This is my beloved son.   Listen to him.” This is the message which the Father gives to the Apostles, the message of Jesus prepares them to see His glory, the message of the Father is “Listen to him.”   There is no moment in life which cannot be fully lived by listening to Jesus.   In beautiful moments, stop and listen to Jesus, in bad moments, stop and listen to Jesus.   This is the way, He will tell us what we need to do, always.”…Pope Francis 25 February 2018

PRAYER – Father, at the Transfiguration in glory of Your only-begotten Son, You confirmed the mysteries of faith by the witness to Jesus of the prophets Moses and Elijah. You foreshadowed what we shall be when You bring our sonship to its perfection.   Grant that by listening to the voice of Jesus, we may become heirs with Him, who lives and reigns with You and the Holy Spirit, God forever and may Mary, our tender and caring Mother, help us to be bright rays of the saving light of her Son Jesus. Amen

More ancient than the primal world
And older than the morning star,
Before the first things took their shape,
Creator of them all, You are.

Your image is the Lord of life,
Your Son from all eternity,
All that must perish, He restores,
In Him, all reconciled will be.

Transfigured Christ, believed and loved,
In You our only hope has been.
Grant us, in Your unfathomed love,
Those things no eye has ever seen.

O Father, Son and Spirit blest,
With hearts transfigured by Your grace,
May we Your matchless splendour praise
And see the glory of Your face. 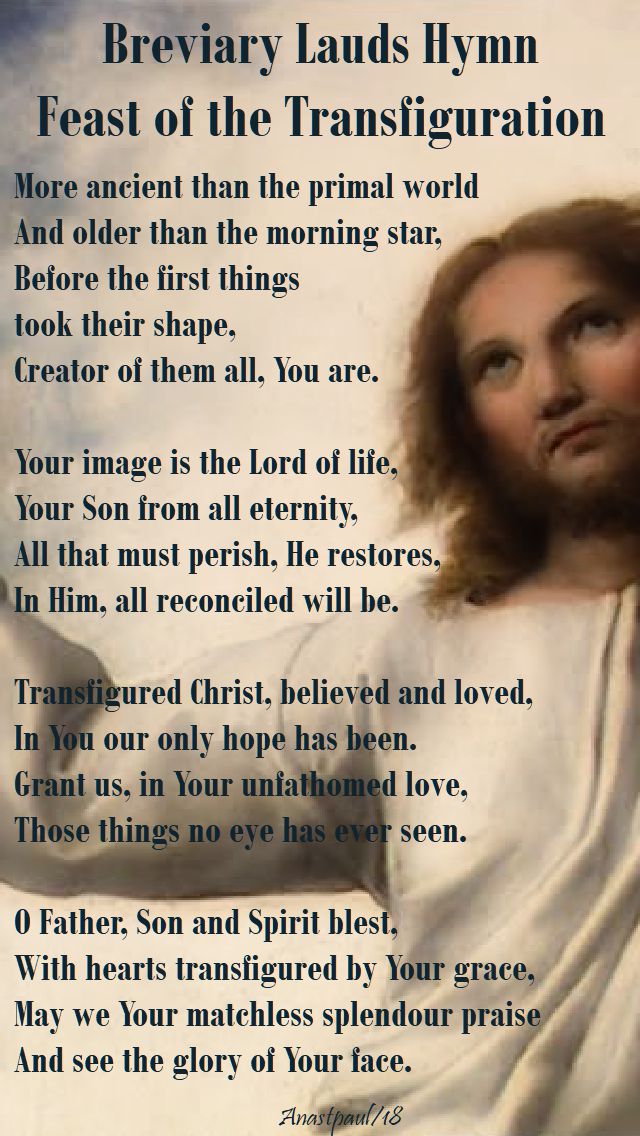 6 August, Feast of the Transfiguration of the Lord

“We are preparing to celebrate Holy Mass on the feast of the Transfiguration of the Lord, cherishing in our hearts the ever-living memory of the Servant of God Paul VI, 22 years after his “going forth” to eternity.

Today’s liturgy invites us to turn our gaze to the face of the Son of God who, as the Synoptics unanimously attest, is transfigured on the mountain before Peter, James and John, while the Father’s voice proclaims from the cloud:  “This is my beloved Son; listen to him” (Mk 9: 7).   St Peter will recall the event with emotion, saying: “We were eyewitnesses of his majesty” (2 Pt 1: 16).

In our era, pervaded by the so-called “image culture”, the desire to be able fill one’s eyes with the figure of the divine Master becomes more intense but it is appropriate to recall his words:  “Blessed are those who have not seen and yet believe” (Jn 20: 29).   It was precisely with his eyes of faith fixed on the adorable face of Christ, true man and true God, that the revered and unforgettable Paul VI lived.   Contemplating him with burning and impassioned love, he said:  “Christ is beauty, human and divine beauty, the beauty of reality, of truth, of life” (General Audience, 13 January 1971).   And he added: “The figure of Christ presents, over and above the charm of his merciful gentleness, an aspect which is grave and strong, formidable, if you like, when dealing with cowardice, hypocrisy, injustice and cruelty but never lacking a sovereign aura of love”   (General Audience, 27 January 1971).

As we approach the altar with grateful hearts, praying for the blessed soul of this great Pontiff, we also wish, like him and like the disciples, to turn our gaze to the radiant face of the Son of God to be illumined by it.   Let us ask God, through the intercession of Mary, Teacher of faith and contemplation, to enable us to receive within us, the light that shines brightly on the face of Christ, so that we may reflect its image on everyone we meet.” 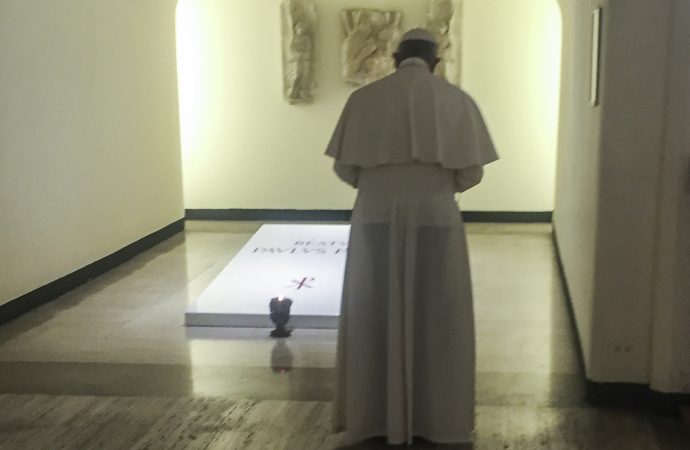 “Forty years ago, Blessed Paul VI was living his last hours on earth.   In fact, he died on the evening of 6 August 1978,” Francis recounted.   “We remember him with so much veneration and gratitude while awaiting his Canonisation next October 14.   From Heaven, may he intercede for the Church, which he so loved and for peace in the world.   We all greet with applause this great Pope of modernity!”...Pope Francis 5 August 2018 . 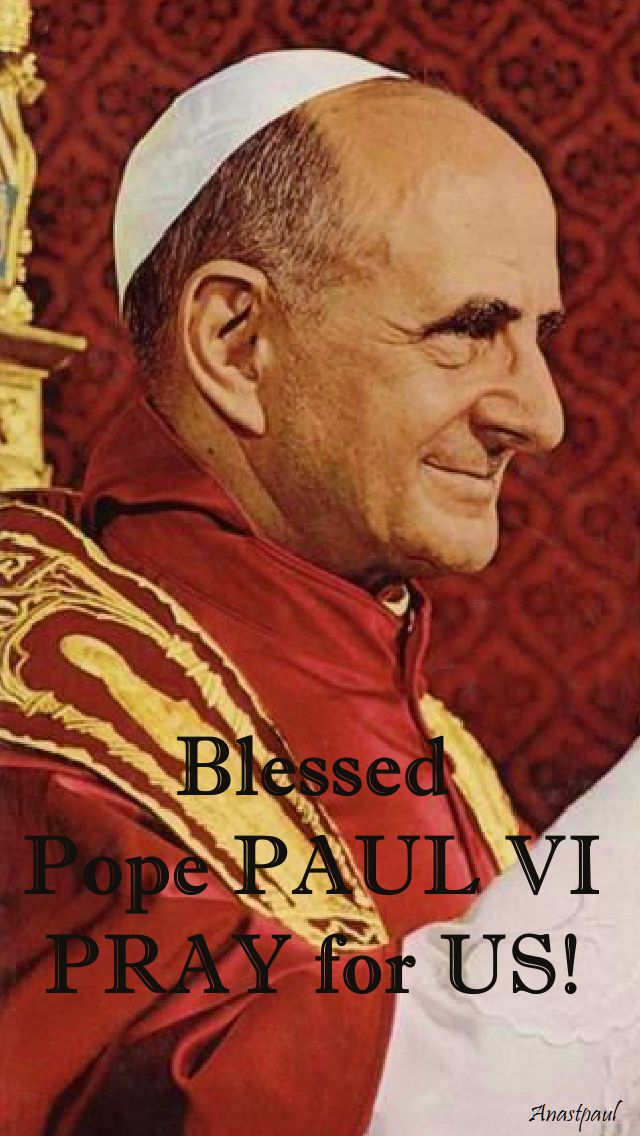 All three Synoptic Gospels tell the story of the Transfiguration (Matthew 17:1-8; Mark 9:2-9; Luke 9:28-36).   With remarkable agreement, all three place the event shortly after Peter’s confession of faith that Jesus is the Messiah and Jesus’ first prediction of his passion and death.   Peter’s eagerness to erect tents or booths on the spot suggests it occurred during the week-long Jewish Feast of Booths in the fall. 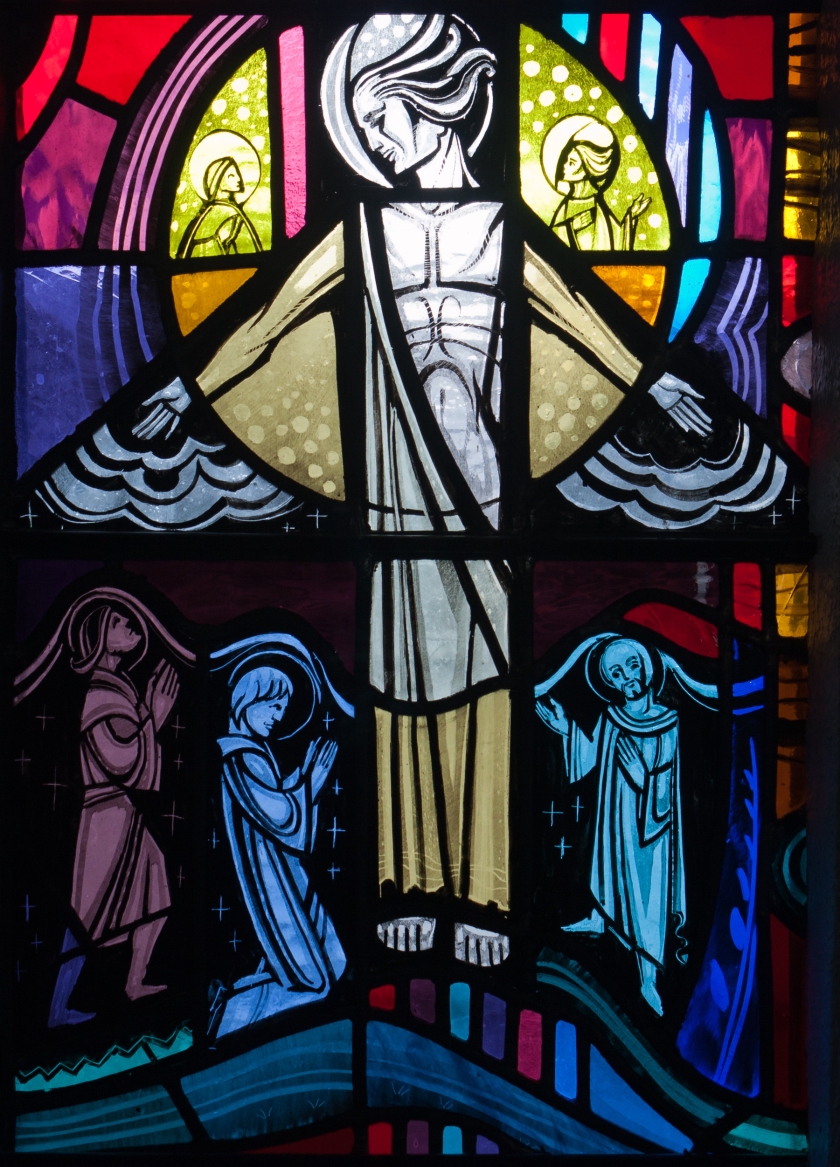 According to Scripture scholars, in spite of the texts’ agreement it is difficult to reconstruct the disciples’ experience, because the Gospels draw heavily on Old Testament descriptions of the Sinai encounter with God and prophetic visions of the Son of Man.   Certainly Peter, James and John had a glimpse of Jesus’ divinity strong enough to strike fear into their hearts.   Such an experience defies description, so they drew on familiar religious language to describe it.   And certainly, Jesus warned them, that His glory and His suffering were to be inextricably connected—a theme John highlights throughout his Gospel. 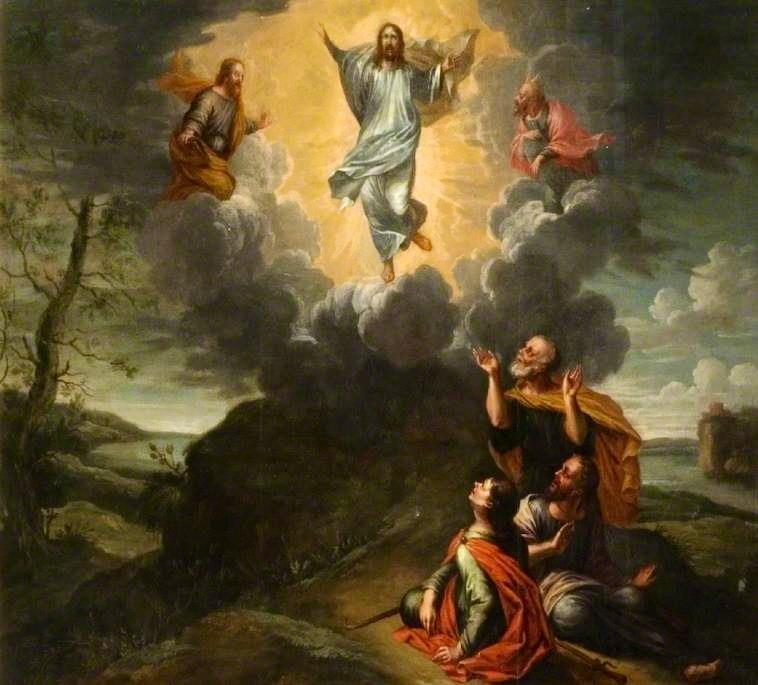 Tradition names Mount Tabor as the site of the revelation.   A church first raised there in the fourth century was dedicated on 6 August.   A feast in honour of the Transfiguration was celebrated in the Eastern Church from about that time.   Western observance began in some localities about the eighth century.

On 22 July 1456, Crusaders defeated the Turks at Belgrade.   News of the victory reached Rome on 6 August and Pope Callistus III placed the feast on the Roman calendar the following year.

One of the Transfiguration accounts is read on the second Sunday of Lent each year, proclaiming Christ’s divinity to the Elect and baptised alike.   The Gospel for the first Sunday of Lent, by contrast, is the story of the temptation in the desert—affirmation of Jesus’ humanity.

Transfiguration of Our Lord (Feast)
https://anastpaul.wordpress.com/2017/08/06/august-6-the-feast-of-the-transfiguration-of-the-lord/