“The spirit of this holy work is all love. “

“For the triumph of His mercy and to show His infinite love for us, our divine Redeemer, Jesus Christ shed all His precious Blood with great suffering and humiliation, as price of salvation and of glory.   He gave it all, He gave it for all and He does not stop giving it…

This lowly Congregation which lives and labours under the glorious title of the most precious Blood of Jesus Christ, must itself take on the shape and pattern of a living image of that divine love with which it was shed and of which it was and is, a symbol, expression, measure and pledge.

The spirit of this holy work is all love.   We have carved this word in our minds and on our hearts.   I repeat: Love! Love toward God and our dear neighbour…

What a beautiful consolation it is to see spouses of the divine Lamb, the Adorers of His most precious Blood, motivated by one sole will, the will of God, forming but one heart and one soul and thus united, making the heavens resound, with a hymn of thanksgiving, to the infinite goodness of God, while at the same time, they offer the Blood of His Son for the reconciliation of heaven with earth, of earth with heaven…”

St Maria de Mattias, Pray for us, that we may be all LOVE! 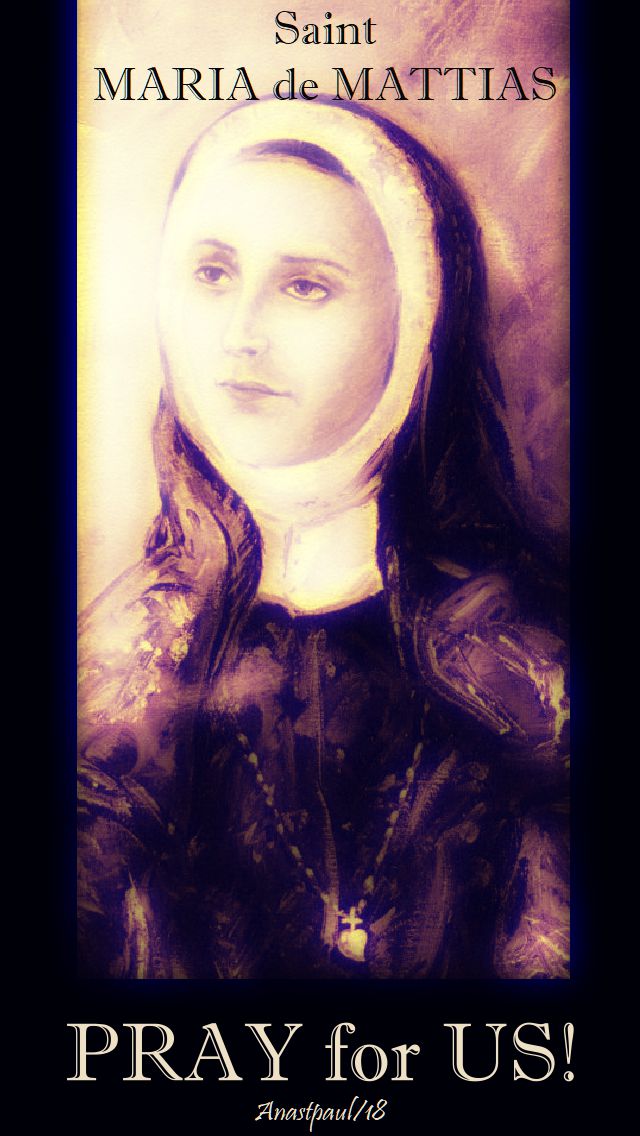 “The measure of love is love without measure.” 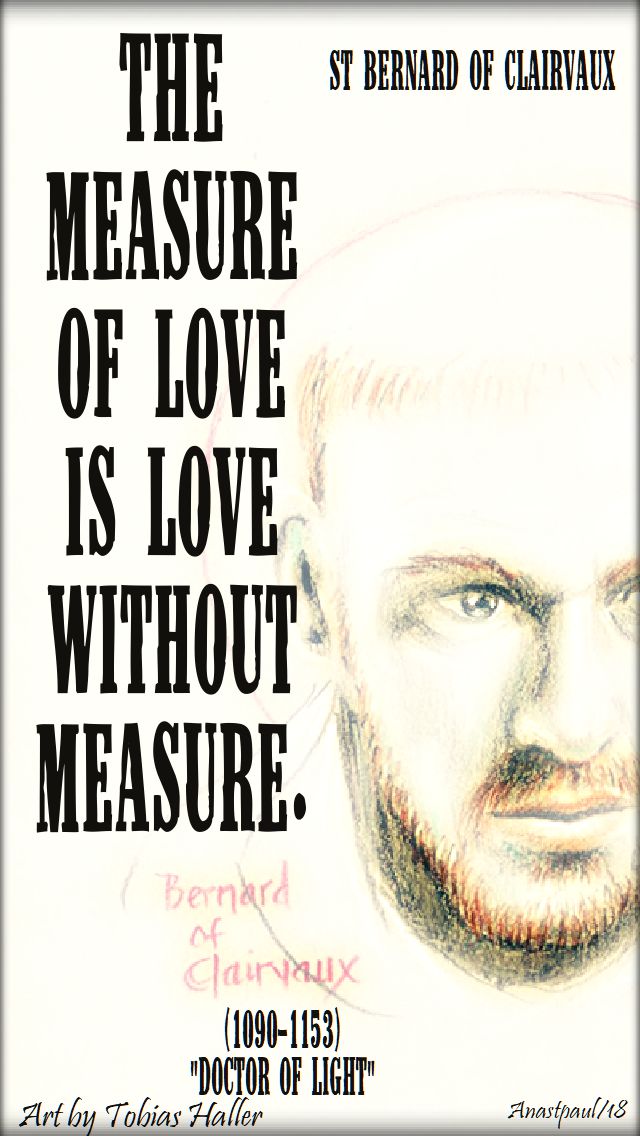 “Are you troubled?
Think but of Jesus,
speak but the name of Jesus,
the clouds disperse
and peace descends anew from heaven.
Have you fallen into sin?
So that you fear death?
..invoke the name of Jesus
and you will soon feel life returning.
No obduracy of the soul, no weakness,
no coldness of heart can resist this holy name –
there is no heart which will not soften
and open in tears at this holy name.” 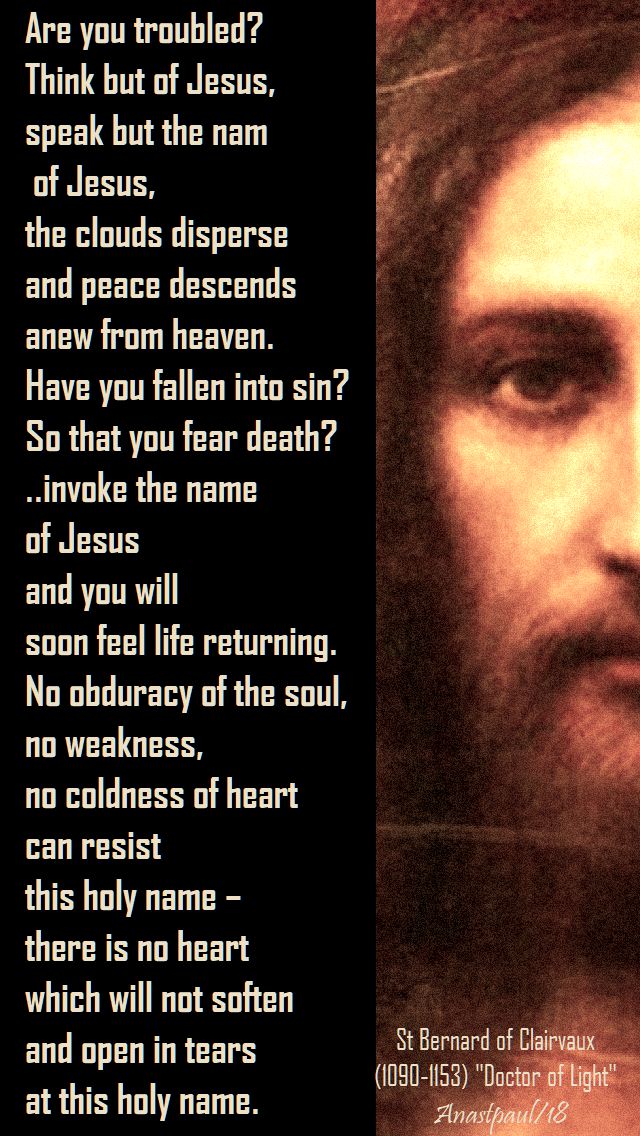 “Action and contemplation are very close companions;
they live together in one house on equal terms.
Martha and Mary are sisters.” 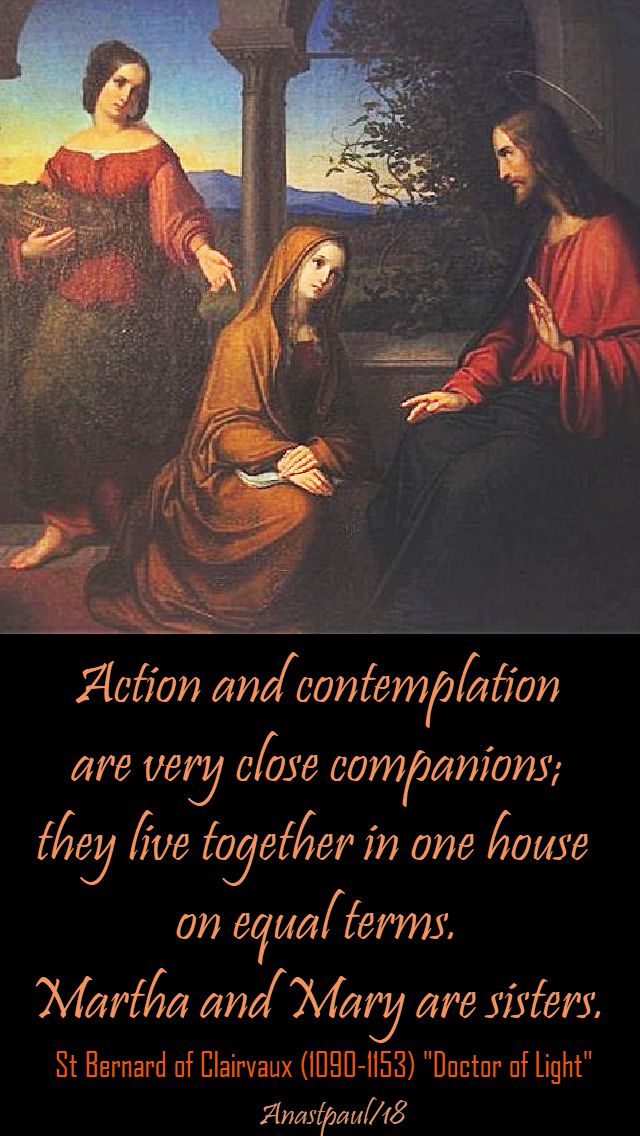 “The three most important virtues are:
humility,
humility
and humility.” 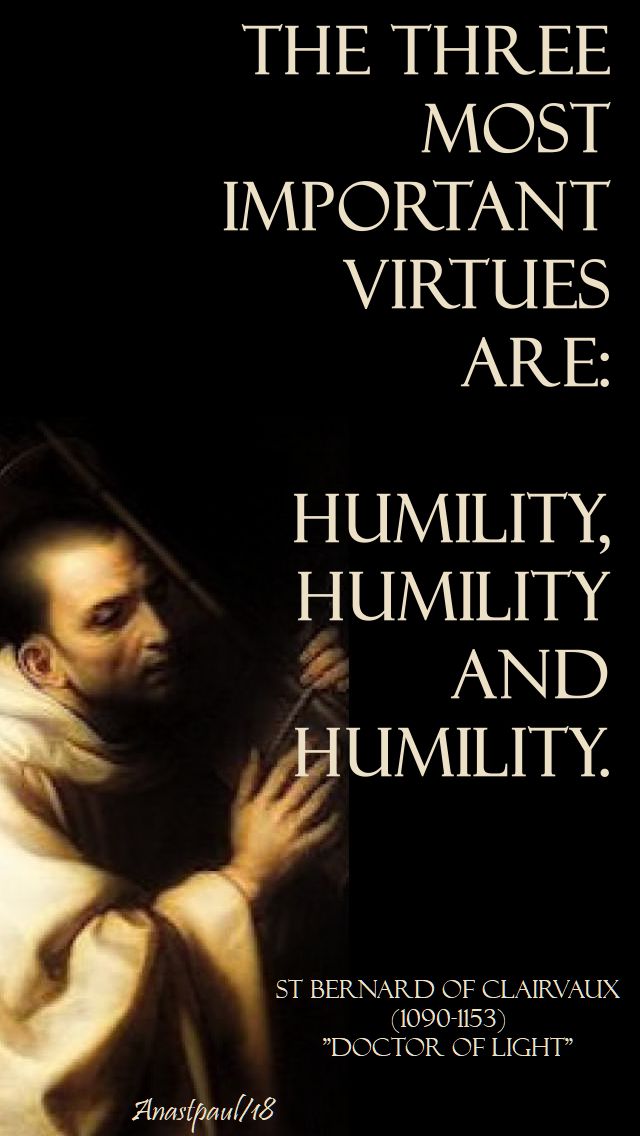 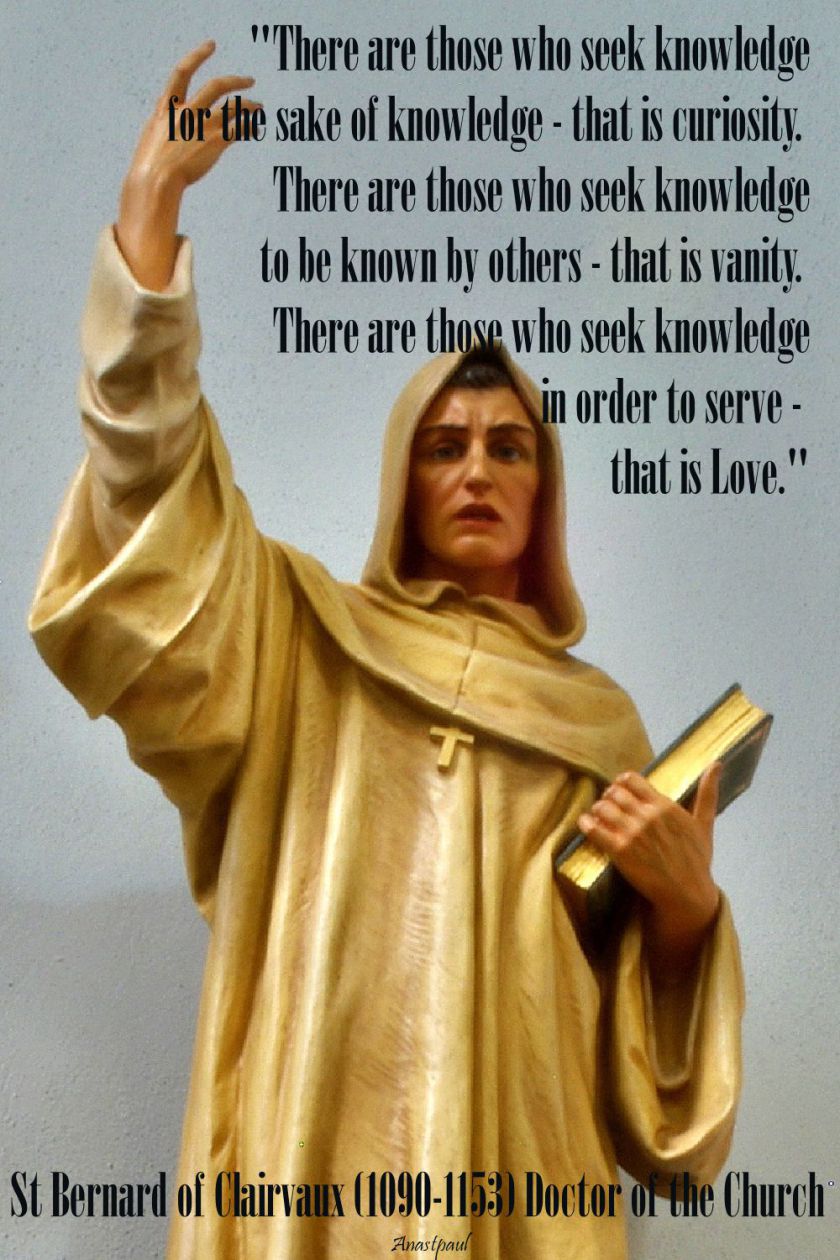 “Let us not imagine that we obscure
the glory of the Son by the great praise
we lavish on the Mother –
for the more she is honoured,
the greater is the glory of her Son.
There can be no doubt that whatever we say
in praise of the Mother gives equal praise to the Son.” 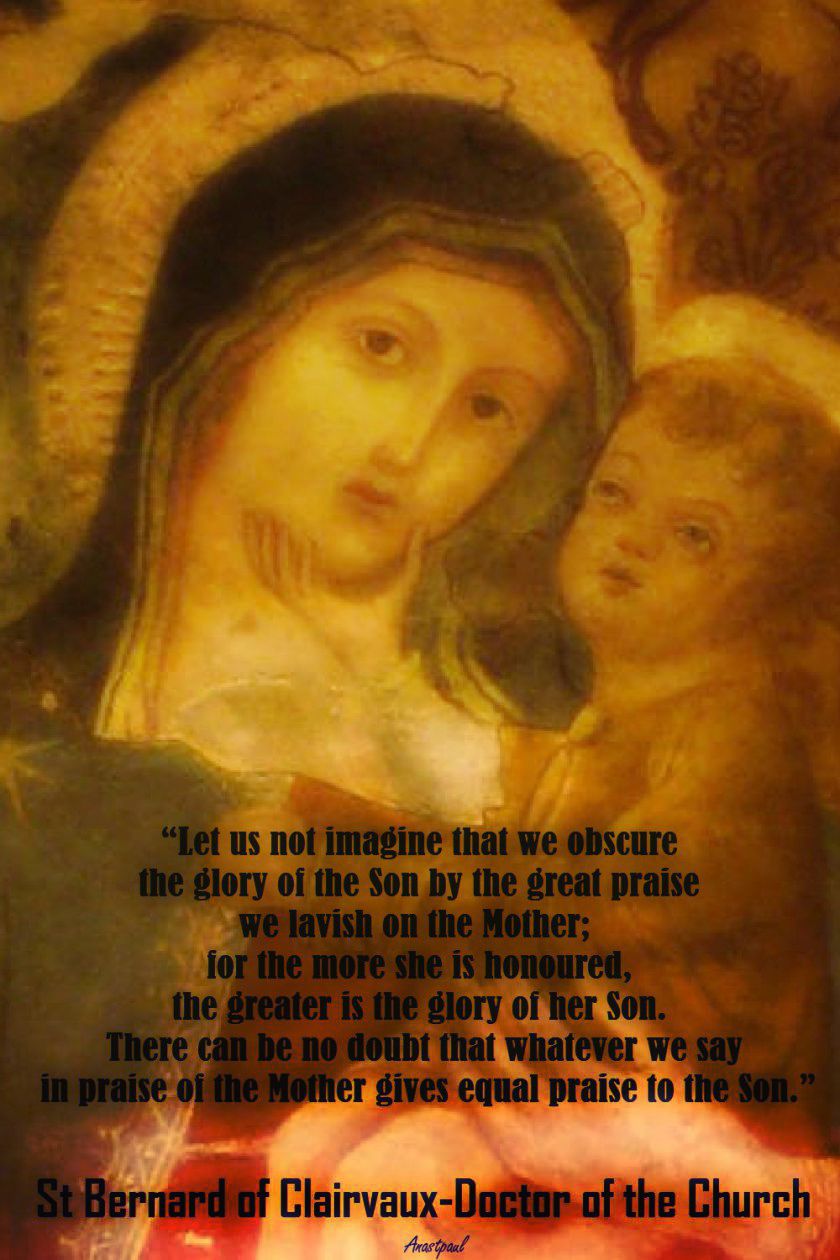 “If the hurricanes of temptation rise against you, or you are running upon the rocks of trouble, look to the star – call on Mary!” 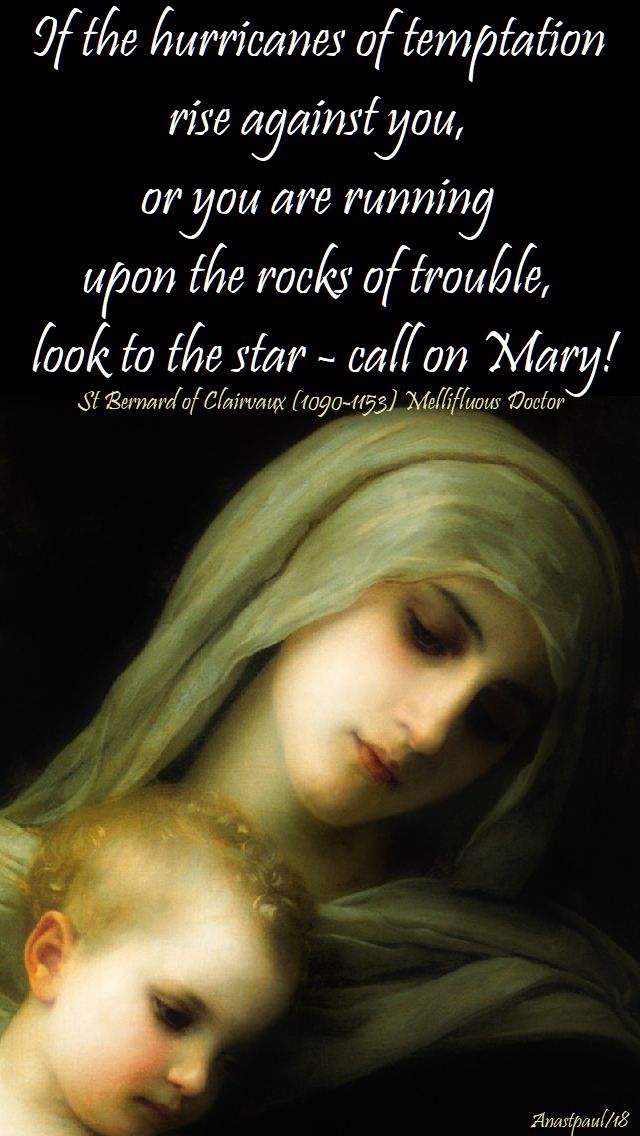 Hold fast to …. a good conscience. Some men, by rejecting the guidance of conscience, have made shipwreck of their faith…1 Timothy 1:19 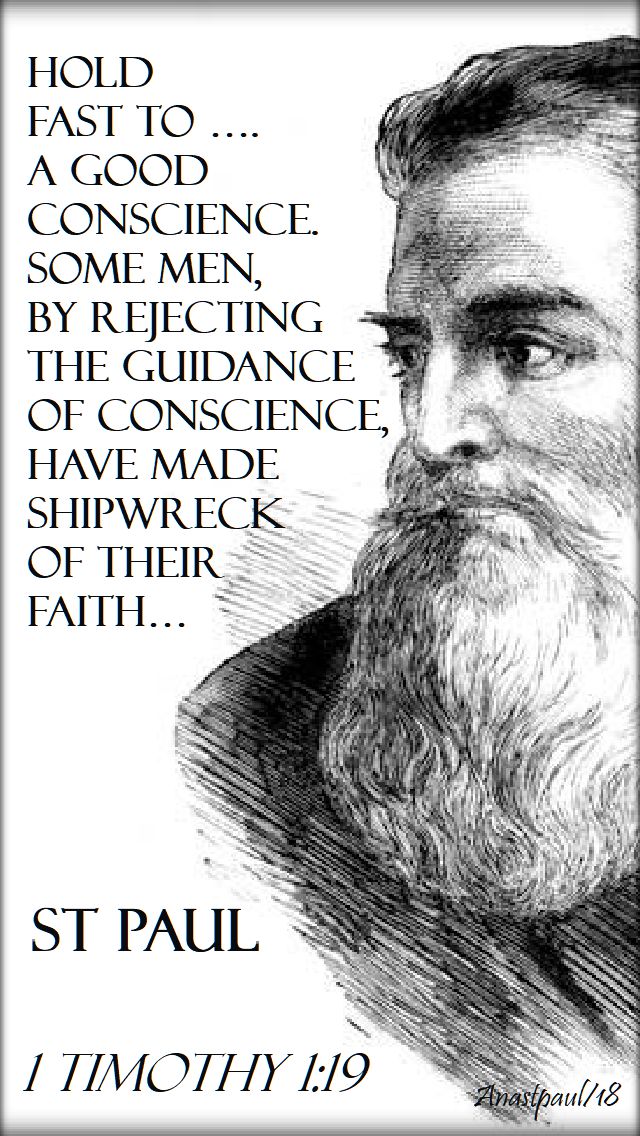 REFLECTION – “A good conscience is a treasury of riches. Indeed, what greater riches can there be – or what can be sweeter – than a good conscience?….St Bernard 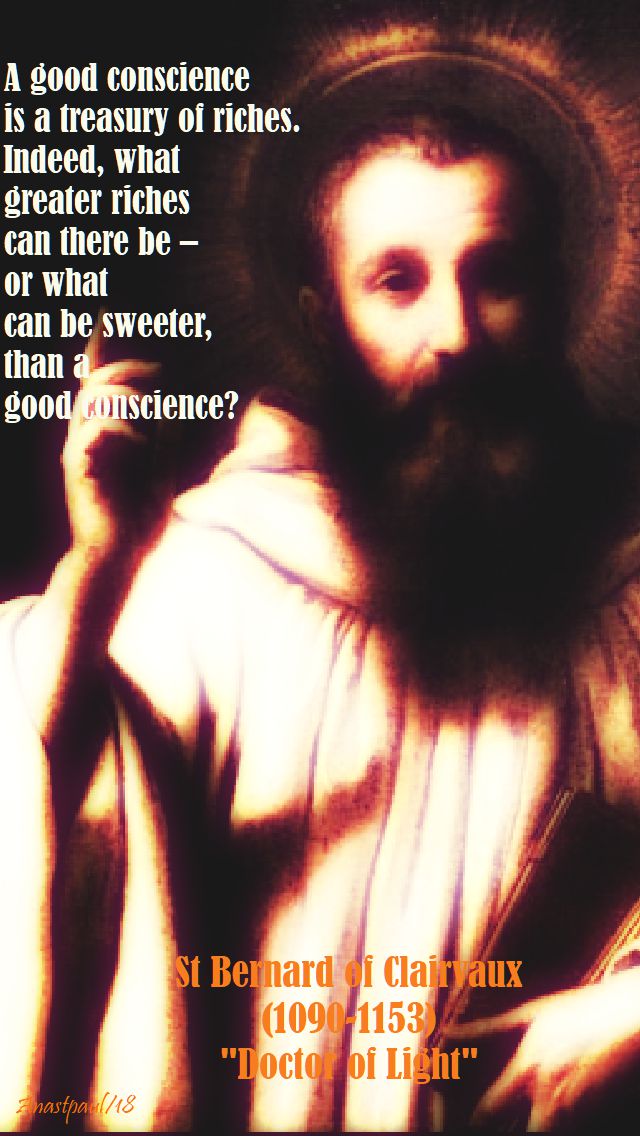 PRAYER – All-knowing God, may we be able to stand in Your presence with a good conscience. Help us to avoid anything that would sully our conscience and do all we can, to remain united with You. We ask that by Your goodness, the prayers of St Bernard and St Maria de Mattias, may assist us to grow in sanctity and develop a holy conscience. We make our prayer through our Lord Jesus Christ, with You and the Holy Spirit, one God forever, amen. 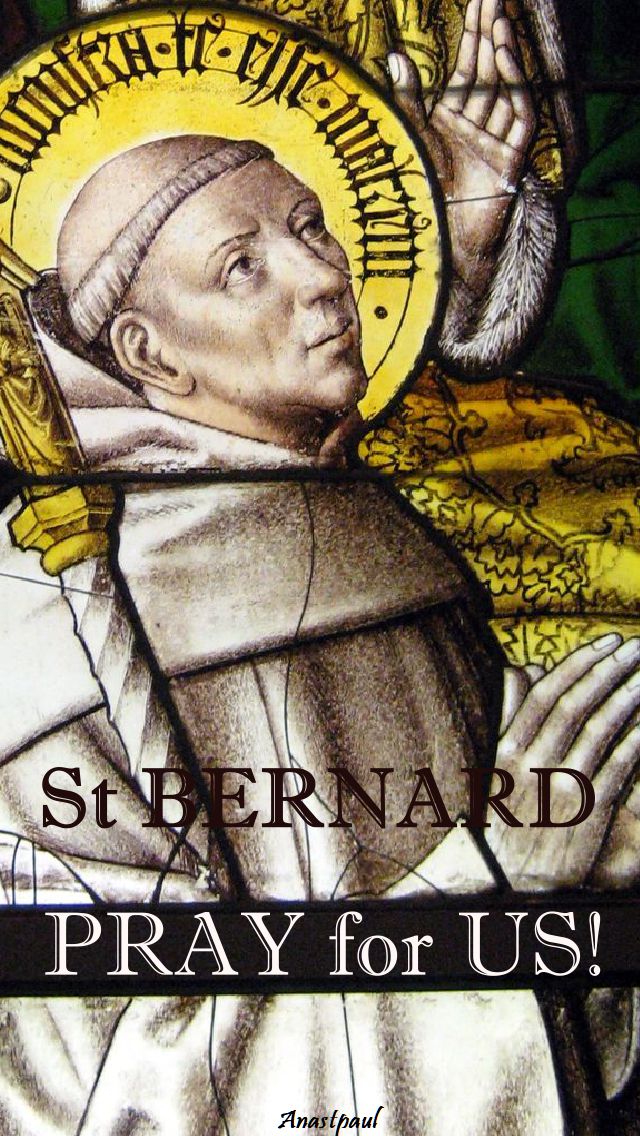 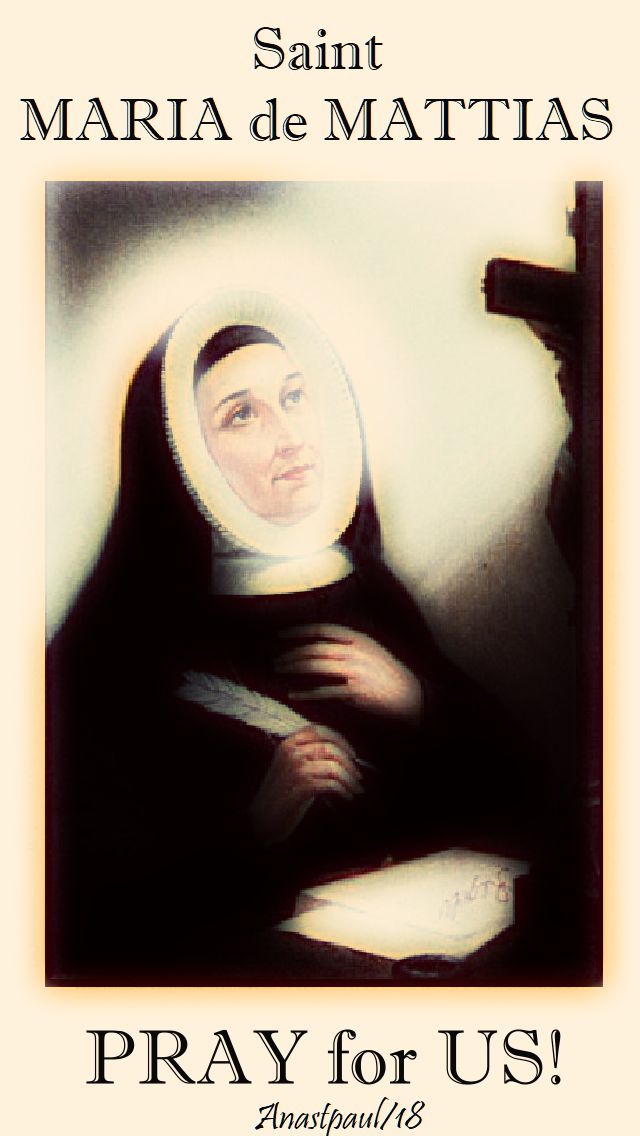 On the Feast Day of St Bernard, can we do better than call on our Mother?

REMEMBER,
O most gracious Virgin Mary,
that never was it known
that anyone who fled
to thy protection,
implored thy help,
or sought thy intercession
was left unaided.
Inspired by this confidence,
I fly unto thee,
O Virgin of virgins,
my Mother;
to thee do I come,
before thee I stand,
sinful and sorrowful.
O Mother of the Word Incarnate,
despise not my petitions
but in thy mercy
hear and answer me.
Amen.

(The “Urgent” or “Emergency” Novena you will recall, is 9 times the Memorare) 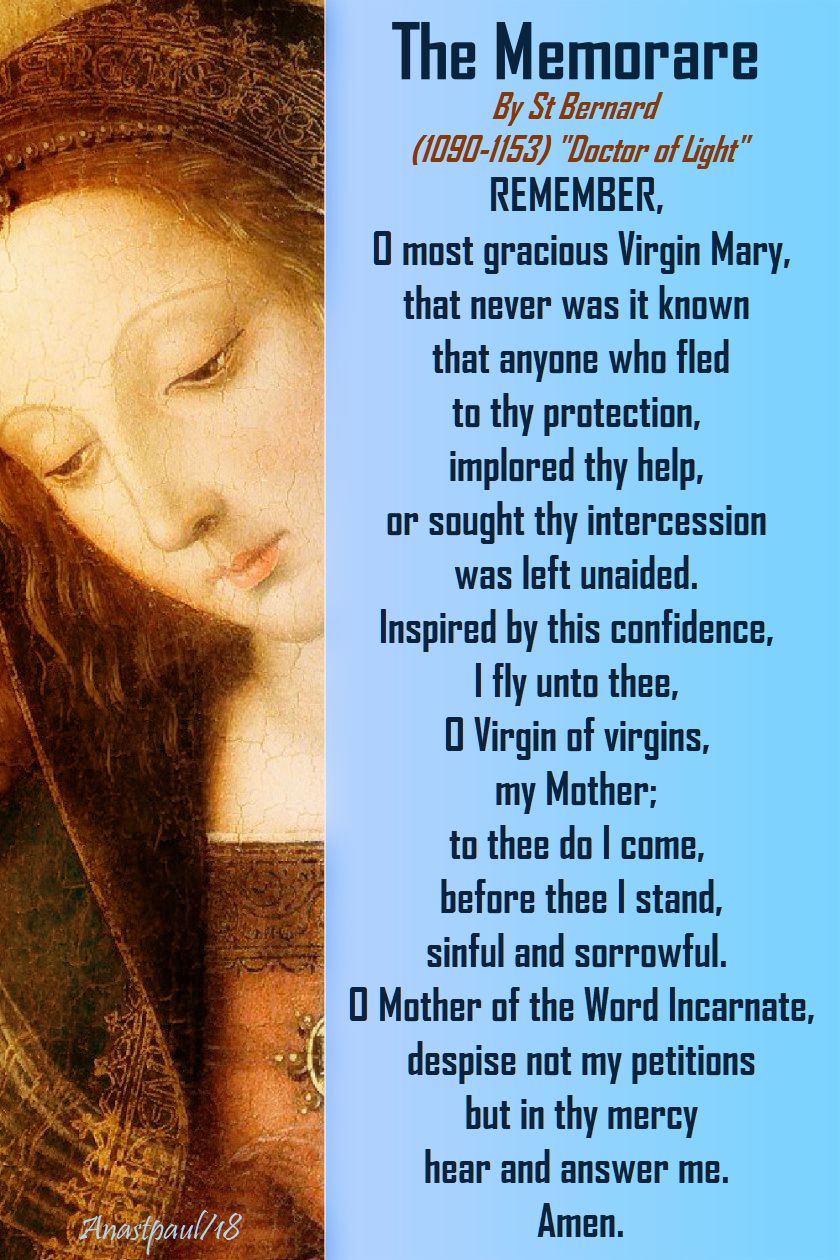 Saint of the Day – 20 August – St Maria de Mattias A.S.C. (1805-1866) – Founder of the religious congregation of the Sisters Adorers of the Blood of Christ, Mystic, Teacher, Preacher, Catechist – born on 4 February 1805 at Vallecorsa, Frosinone, Papal States (modern Italy) and died on 20 August 1866 in Rome, Italy of natural causes. 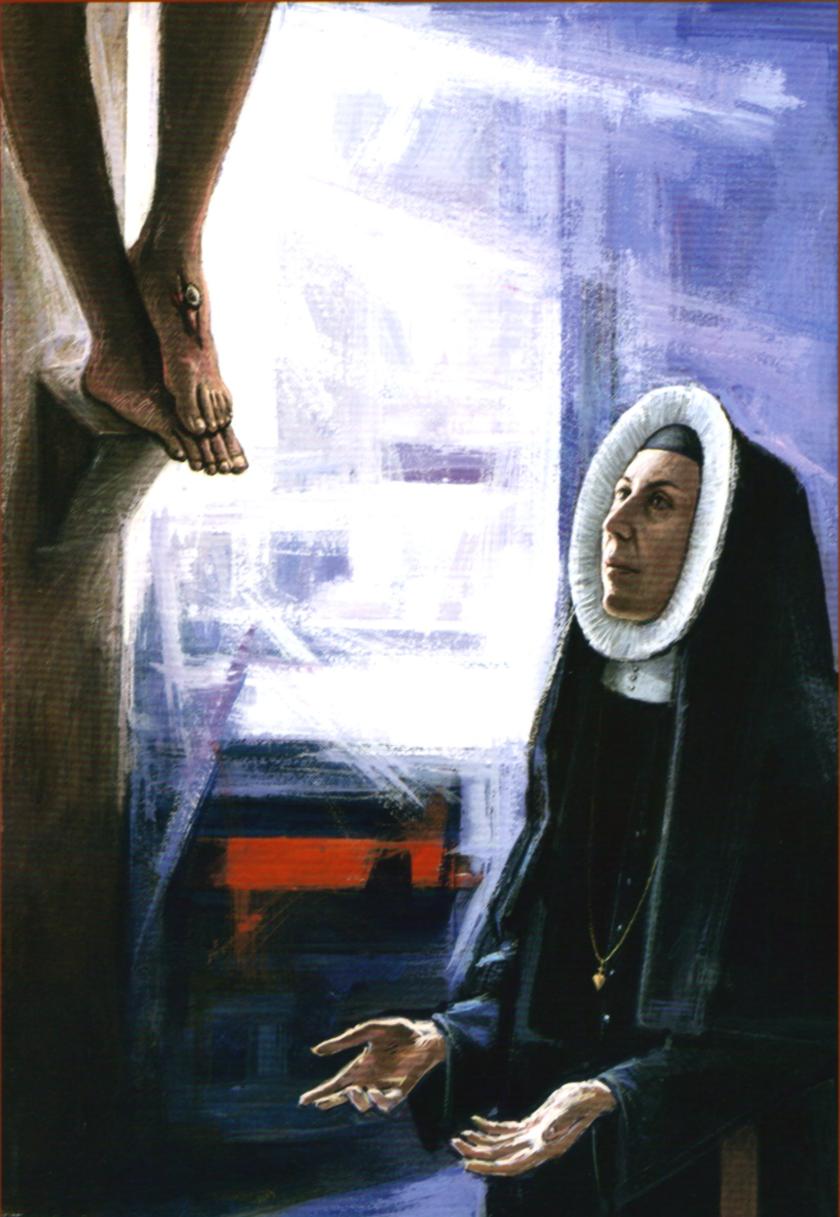 Maria De Mattias was born on 4 February 1805 at Vallecorsa, the southernmost town of the Papal States, in the geographical province of Frosinone.   Her family was not without wealth and learning—even if women were forbidden to study—nor did it lack a deep Christian faith.

Through dialogue with her father, Maria learned and internalised not only the truths of the faith but also and especially, episodes and persons of the Sacred Scriptures.   Her father read the Scriptures to her when she was still very young and she developed a great love for Jesus, the Lamb sacrificed for the salvation of humanity.   All of this happened while Vallecorsa and surrounding areas were experiencing the tragic period of banditry, 1810-1825.   In Maria’s soul, in fact, there was a comparison being made between the human blood poured out in hatred and revenge and the blood of Christ poured out for love, a Blood which saves.

Without formal education and without outside contacts, because of her social class, Maria spent her childhood and early adolescence withdrawn and focused on her beauty. But when she reached the age of sixteen or seventeen, she began to search for the meaning of her life, she felt a need for a boundless love.   Again, it was through dialogue with her father, to whom she revealed her interior darkness and through her having asked Our Lady to “give her light”, that God let her experience the beauty of His love in a “mystical” way.   It was manifested in its fullness in the Crucified Christ, in Christ who gives all His Blood. 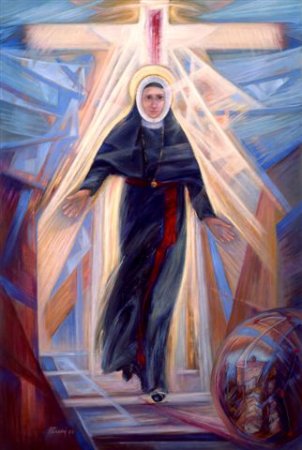 This experience was the source, the force, and the motivation that brought her to the roads of Italy “to make known to everyone the tender love of the Heavenly Father”, as she said, or “the Crucified Love Jesus”.   She was convinced that the reformation of society begins in the heart of the person and that a person becomes transformed when she/he comes to understand how precious each one is in God’s eyes, how much each person is loved…Jesus gave all this Blood to save the human race. 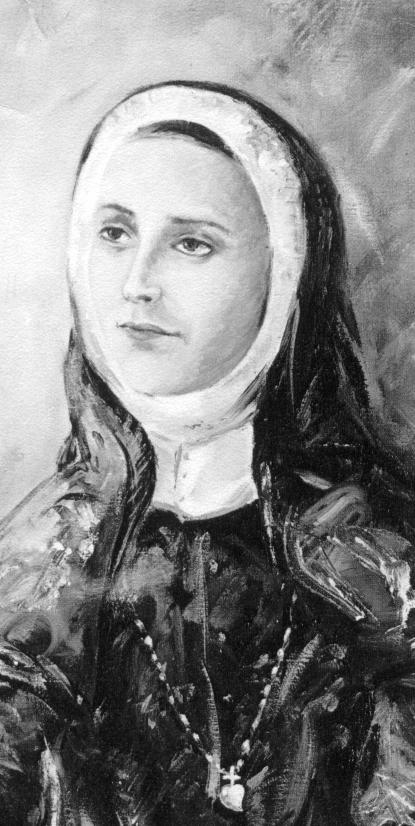 This had been Maria’s experience, therefore, she tried to lead all people, young and adult, to discover what had been revealed to her and changed her.   She had also experienced that this transformation is possible for everyone when, in 1822, when she was seventeen, Gaspar Del Bufalo (1786-1837-Founder of the Missionaries of the Precious Blood) (now “Saint”) went to preach a mission at Vallecorsa.   She saw how the townspeople changed.   It was that occasion that generated the dream in her heart to do what Fr Gaspar was doing.

Under the guidance of one of St Gaspar’s companions, (now Venerable) Fr Giovanni Merlini, she founded the Congregation of the Sisters Adorers of the Blood of Christ in Acuto (Frosinone) on 4 March 1834, at the age of twenty-nine.   She had been called by the Administrator of Anagni, Bishop Giuseppe Maria Lais, to teach the young girls—she had learned to read and write on her own.   Maria, however, who nurtured a dream to reform society and the world, did not limit her activity to the school.   She also gathered mothers and young boys to catechise them, to encourage them to love Jesus and to teach them to live Christian lives, according to their state.   The men, to whom she could not speak according to the customs of the time, went spontaneously to listen to her, even in hiding.   The shepherds, abandoned to their own resources, asked to be instructed by her, even after sundown.   People flocked to the religious functions to listen to the teacher. 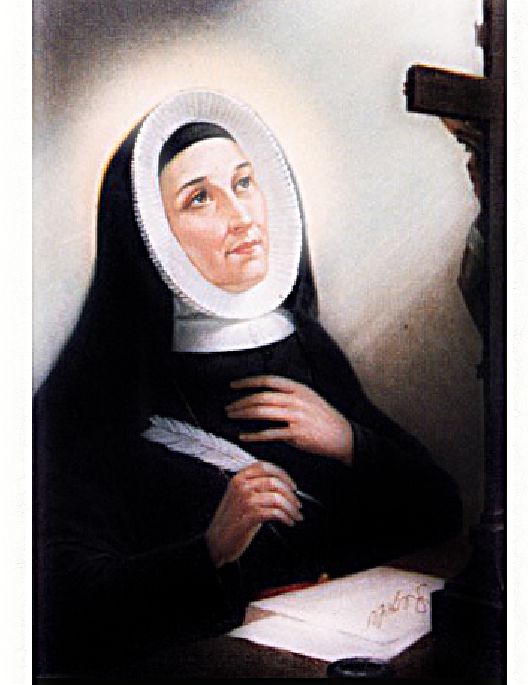 Thus, Maria, from the timid and introverted girl that she was, had become a preacher who attracted little girls, adults, the simple and the learned, lay persons and priests.   It was because, when she spoke about Jesus and the mysteries of the faith, it was as though she had seen these realities, personally.   Her consuming desire was that “not even one drop of the Divine Blood would be lost”, that it would reach all sinners to purify them and so that, washed in that river of mercy, they would rediscover the right way to peace and union among people.   This zeal was caught by many young women and, through them, Maria De Mattias was able to open about seventy communities during her lifetime, three of which were in Germany and England.   Almost all were in small isolated towns of Central Italy, except for Rome, to which she was called by Pius IX for the San Luigi Hospice and for the school of Civitavecchia.

Maria De Mattias life was one lived with the one desire of “giving pleasure to Jesus” who had stolen her heart in her youth and in a joyful commitment to save “the dear neighbour” from ignorance regarding the mystery of God’s love for humanity.   All of this led her not to spare her energies, she did not give up when faced with disappointments or difficulties, she always worked in deep communion with the local and universal Church and for love of Her.

Maria De Mattias died at Rome on 20 August 1866 and was buried in Rome’s Verano Cemetery, according to the desire of Pope Pius IX, who chose a tomb for her and commissioned a bas-relief on it depicting the vision of Ezechiel:  “Dry bones, hear the word of the Lord”. 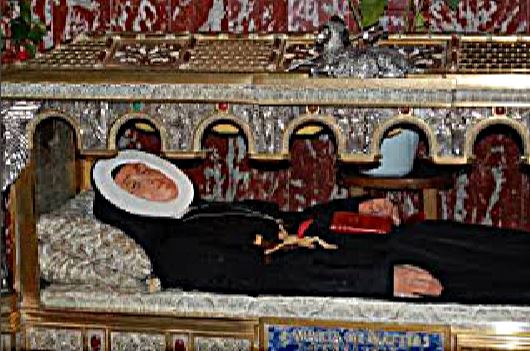 Her reputation for holiness remained alive after her death.   The process for her beatification began thirty years later, culminating in that blessed event 1 October 1950, when Pius XII pronounced her “Blessed.”   She was Canonised on 18 May 2003 by St Pope John Paul II at the Vatican Basilica. 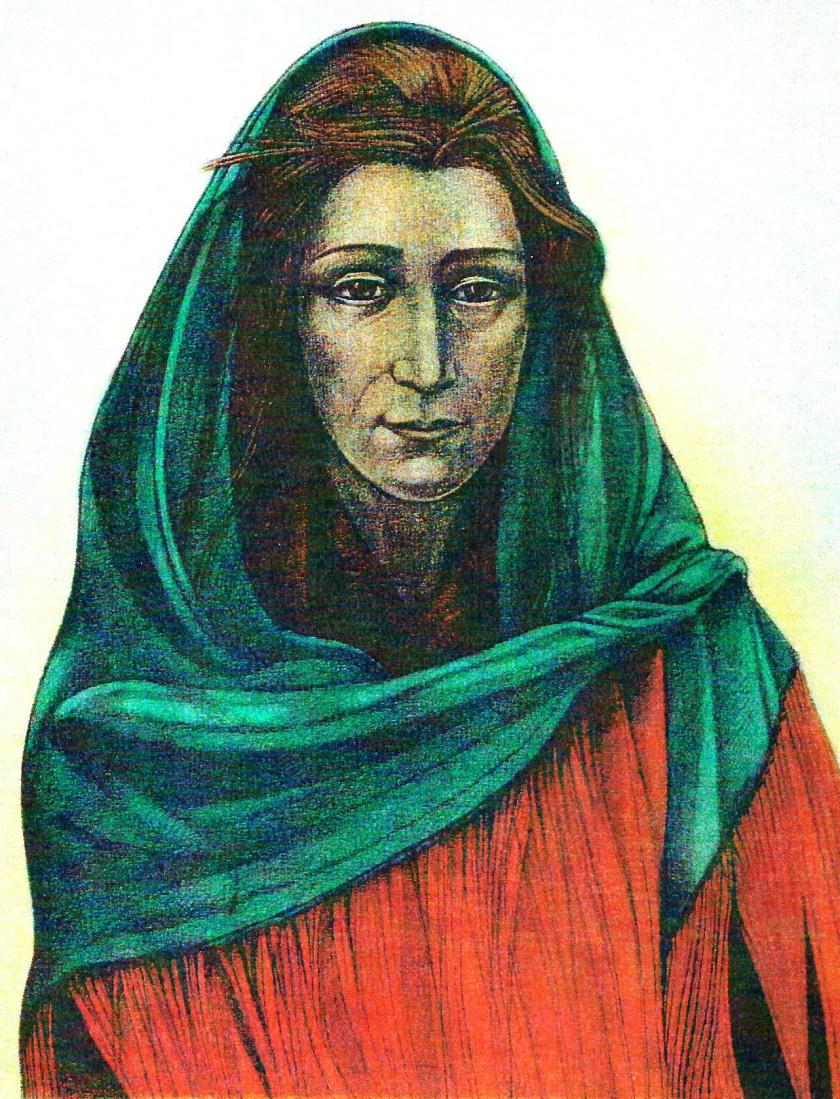