St Stephen introduced into Hungary both the Faith of Christ and regal dignity.   He obtained his royal crown from the Roman Pontiff and having been, by his command, anointed King, he offered his kingdom to the Apostolic See.   He built several houses of charity at Rome, Jerusalem and Constantinople and with a wonderfully munificent spirit of religion, he founded the See of Gran and ten other bishoprics.   His love for the poor was equalled only by his generosity towards them, for, seeing in them Christ Himself, he never sent anyone away sad or empty-handed.   So great indeed was his charity, that, to relieve their necessities, after expending large sums of money, he often bestowed upon them his household goods.   It was his custom to wash the feet of the poor with his own hands and to visit the hospitals at night, alone and unknown, serving the sick and showing them every charity.   As a reward for these good deeds his right hand remained incorrupt after death, when the rest of his body had returned to dust – it resides in a chapel of the Basilica of St Stephen, Budapest, Hungary. 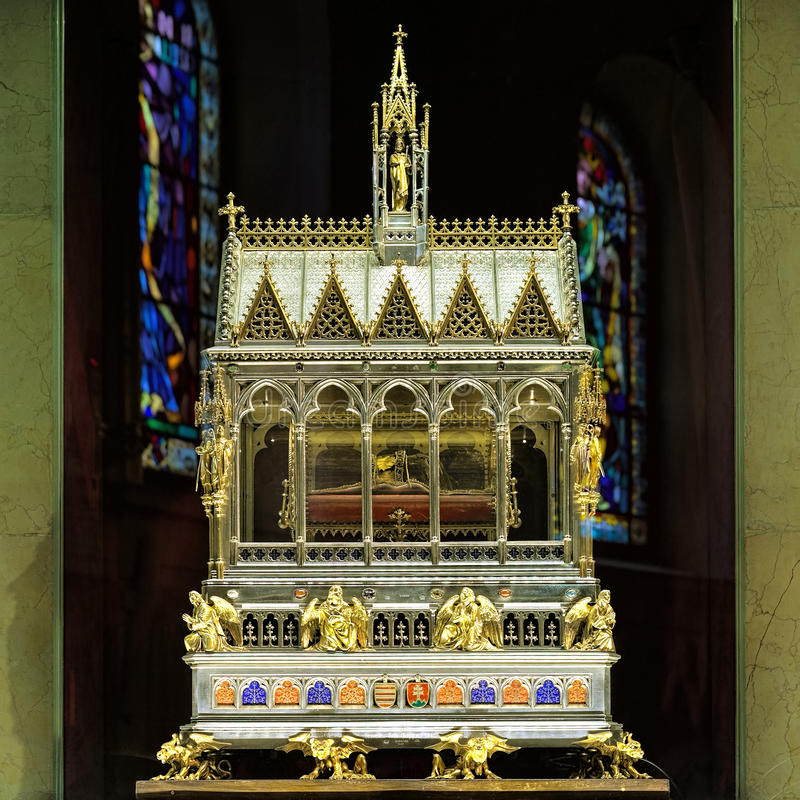 Having married Gisela of Bavaria, sister of the Emperor St Heinrich, he had by her a son, Emeric, whom he brought up in such regularity and piety as to form him into a saint. In the following letter to his son, Stephen lays out his vision of what a Christian monarch must be but in fact, the counsel remains a letter to us all.   For this and your intercession, we bless and thank you St Stephen!

“My dearest son, if you desire to honour the royal crown, I advise, I counsel, I urge you above all things to maintain the Catholic and apostolic faith with such diligence and care that you may be an example for all those placed under you by God and that all the clergy may rightly call you a man of true Christian profession.   Failing to do this, you may be sure that you will not be called a Christian or a son of the Church.   Indeed, in the royal palace – after the faith itself – the Church holds second place, first propagated as she was by our head, Christ, then transplanted, firmly constituted and spread through the whole world by His members, the apostles and holy fathers.   And though she always produced fresh offspring, nevertheless in certain places she is regarded as ancient.

However, dearest son, even now in our kingdom, the Church is proclaimed as young and newly planted and for that reason, she needs more prudent and trustworthy guardians, lest a benefit which the divine mercy bestowed on us undeservedly, should be destroyed and annihilated, through your idleness, indolence or neglect.

My beloved son, delight of my heart, hope of your posterity, I pray, I command, that at every time and in everything, strengthened by your devotion to me, you may show favour not only to relations and kin, or to the most eminent, be they leaders or rich men or neighbours or fellow-countrymen but also to foreigners and to all who come to you. By fulfilling your duty in this way you will reach the highest state of happiness.   Be merciful to all who are suffering violence, keeping always in your heart the example of the Lord who said:  “I desire mercy and not sacrifice.”   Be patient with everyone, not only with the powerful but also with the weak.

Finally be strong, lest prosperity lift you up too much or adversity cast you down.   Be humble in this life, that God may raise you up in the next.   Be truly moderate and do not punish or condemn anyone immoderately.   Be gentle so that you may never oppose justice.   Be honourable so that you may never voluntarily, bring disgrace upon anyone. Be chaste so that you may avoid all the foulness of lust, like the pangs of death.

All these virtues I have noted above make up the royal crown and without them no one is fit to rule here on earth or attain to the heavenly kingdom.”

St Stephen the Great, King of Hungary, Pray for us! 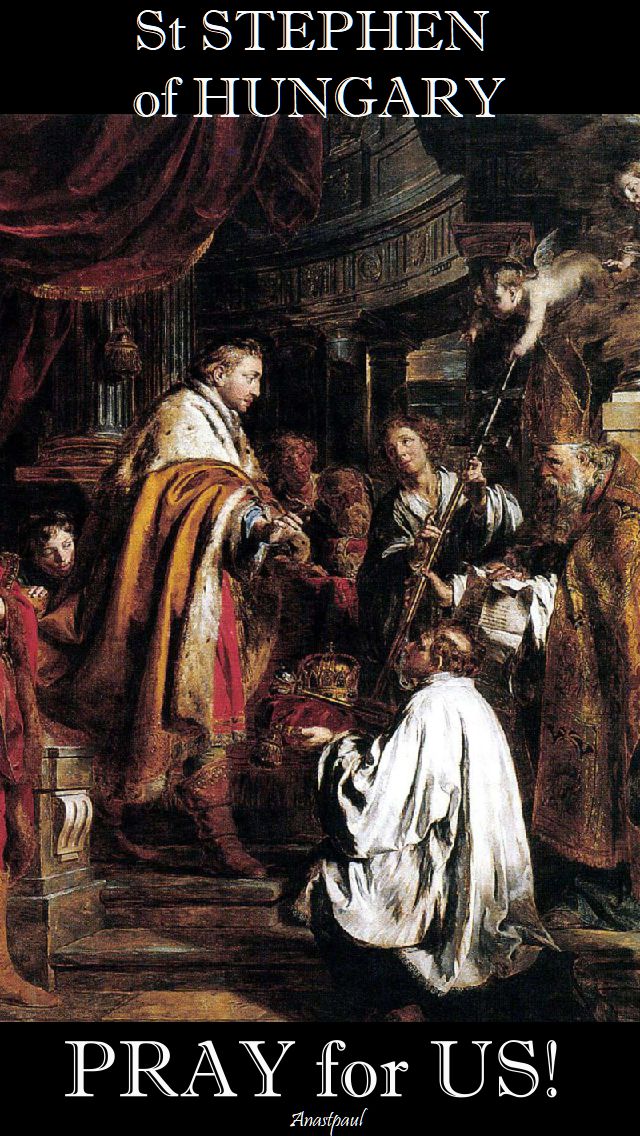 “Be merciful to all
who are suffering violence,
keeping always in your heart
the example of the Lord
who said,
‘I desire mercy and not sacrifice.’”

“So also my heavenly Father will do to every one of you, if you do not forgive your brother from your heart.”…Matthew 18:35

If you show favouritism, you commit sin and are convicted by the law…..James 2:9

REFLECTION – “Do not show favour only to relations and kin, or to the most eminent – whether they are leaders or the wealthy or neighbours or citizens of the same country. Show favour to all who come to you.   By fulfilling your duty in this way, you will reach the highest state of happiness.”…St Stephen of Hungary

PRAYER – Just and Holy Father, help me to overcome all tendencies to show favouritism in my life.   Let me treat all persons as brothers and sisters in Christ and work and pray for their salvation.   As You forgive me, teach me Lord, to forgive all.   Grant that the prayers of St Stephen of Hungary may continue to defend us, as he did in the world.  Through Jesus our Lord, with the Holy Spirit, one God forever, amen. 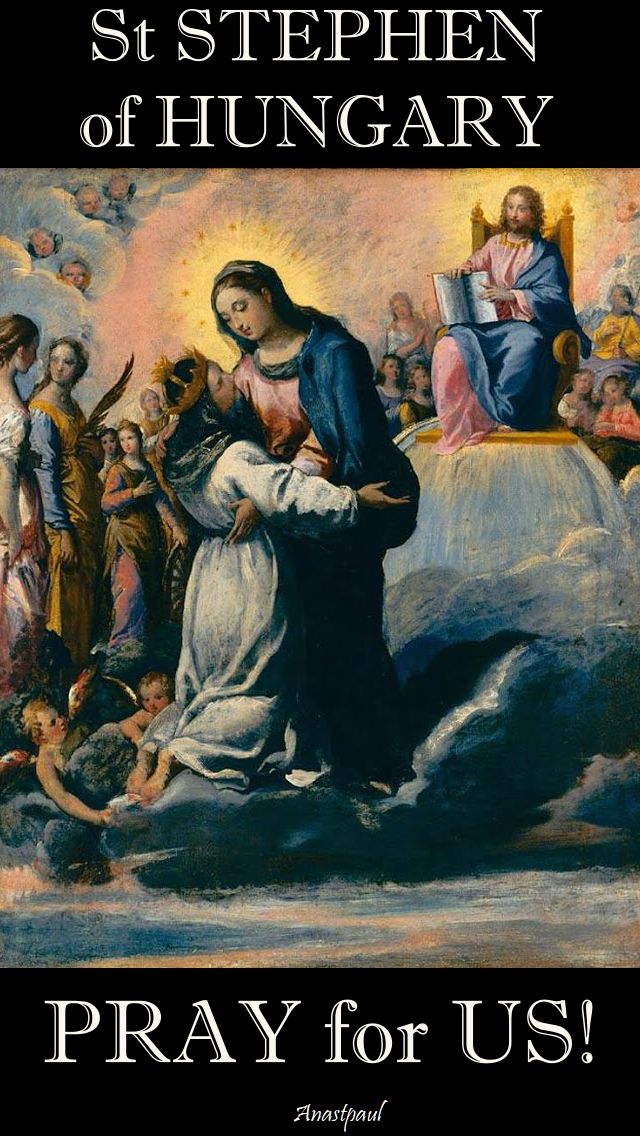 O Lord,
let me not henceforth desire health or life,
except to spend them for You
and with You.
You alone know what is good for me,
do, therefore, what seems best.
Give to me or take from me,
conform my will to Yours
and grant that,
with humble and perfect submission
and in holy confidence,
I may receive the orders
of Your eternal providence
and may equally adore,
all that comes to me from You,
through Jesus Christ our Lord.
Amen

Saint of the Day – 16 August – St Stephen of Hungary (c 975- 1038) Apostle of Hungary, King and Confessor, Marian devotee,  Apostle of Charity, Evangeliser and Missionary – born at Esztergom, Hungary and died on 15 August 1038 at Szekesfehervar, Hungary.   Also known as – Stephen the Great, Apostolic King, Istvan.   Patronages – Patron saint of Hungary, of kings, masons, stonecutters, stonemasons and bricklayers and a protector against child death.

The fourth Duke of the Huns of Hungary, by the name of Geysa, was converted to the Faith and baptised with his wife and several ministers.   With the Christian missionaries, he laboured to convince his pagan subjects of the divinity of this religion.   His wife saw in a vision the protomartyr Saint Stephen, who told her they would have a son who would perfect the work already begun.   This son, born in the year 977, was given the name of Stephen.

The little prince was baptised by Saint Adalbert (c 956-997), bishop of Prague, who preached to the Hungarians for a time and was educated under the care of that bishop and a pious count of Italy.

When he was fifteen years old, his father gave him the commandment of his armies, seeing his virtue and Christian ardour.   Already Stephen was beginning to root out idolatry and transform the pagan customs still existing among the people.   At twenty years of age, he succeeded his good father, who died in 997.   He suppressed a rebellion of his pagan subjects and founded monasteries and churches all over the land.   He sent to Pope Sylvester, begging him to appoint bishops to the eleven sees he had endowedand to bestow on him, for the greater success of his work, the title of king.   The Pope granted his requests, and sent him a cross to be borne before him, saying that he regarded him as the true apostle of his people. 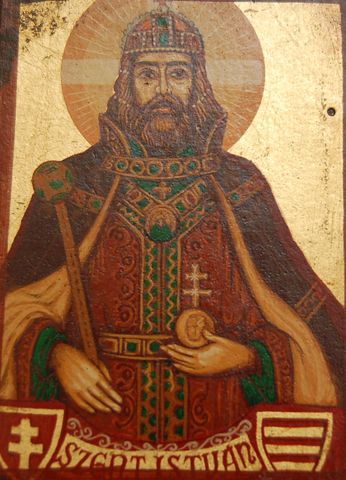 Saint Stephen’s devotion was fervent.   He placed his realms under the protection of our Blessed Lady and kept the feast of Her Assumption with great affection.   He established good laws and saw to their execution.   Throughout his life, we are told, he had Christ on his lips, Christ in his heart and Christ in all he did.   His only wars were wars of defence, and in them he was always successful.   He married the sister of the Emperor Saint Henry, who was a worthy companion for him.   God sent him many grievous trials amid his successes, one by one his children died, though his successor, Emeric, survived and was the love of his heart but he too died as a young adult.

He often went out in disguise to exercise his charities and one day a troop of beggars, not satisfied with the alms they received, threw him down, tore out handfuls of his hair and beard and took his purse.   He prayed to the Lord and thanked Him for an insult he would not have suffered from enemies but accepted gladly from the poor who, he said to Him, “are called Your own and for whom I can have only indulgence and tenderness.”   He bore all reversals with perfect submission to the Will of God.

When Saint Stephen was about to die, he summoned the bishops and nobles and told them to choose his successor.   He urged them to nurture and cherish the Catholic Church, which was still a tender plant in Hungary, to follow justice, humility and charity, to be obedient to the laws and to show at all times a reverent submission to the Holy See. Then, raising his eyes towards heaven, he said:  “O Queen of Heaven, August Restorer of a prostrate world, to Thy care I commend the Holy Church, my people and my realm and my own departing soul.”   It was on his favourite feast day, the Assumption, that he died in peace, in the year 1038. 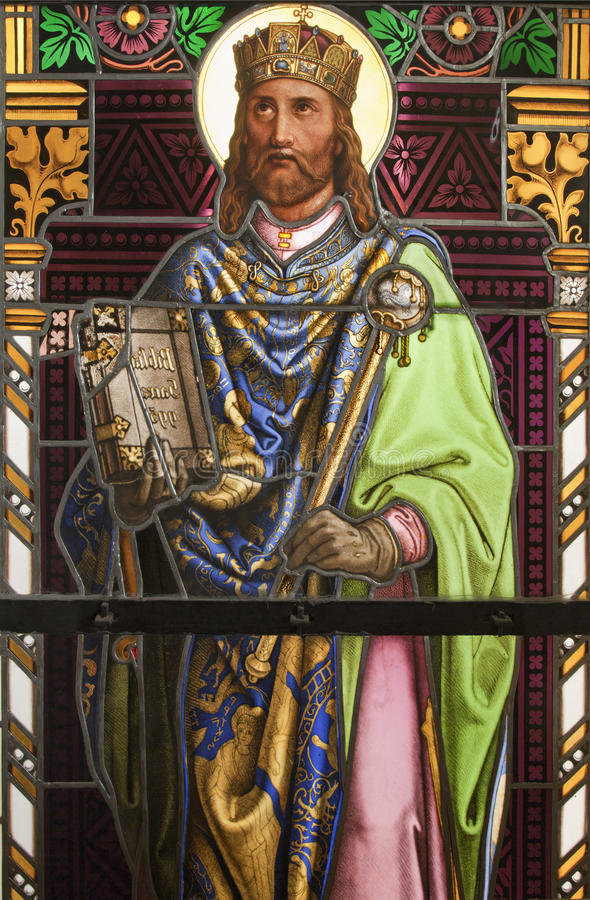 St Stephen’s Canonisation ceremony began at Stephen’s tomb, where on 15 August 1083 masses of believers began three days of fasting and praying.   The opening of Stephen’s tomb was followed by the occurrence of healing miracles.   Stephen’s biographers also say that his “balsam-scented” remains were elevated from the coffin, which was filled with “rose-coloured water”.   On the same day, Stephen’s son, Emeric and the bishop of Csanád, Gerard, were also canonised.

“Having completed the office of Vespers the third day, everyone expected the favours of divine mercy through the merit of the blessed man;  suddenly with Christ visiting His masses, the signs of miracles poured forth from heaven throughout the whole of the holy house.   Their multitude, which that night were too many to count, brings to mind the answer from the Gospel which the Saviour of the world confided to John, who asked through messengers whether he was the one who was to come:  the blind see, the lame walk, the deaf hear, the lepers are cleansed, the crippled are set straight, the paralysed are cured…”…Bishop Hartvic, Life of King Stephen of Hungary 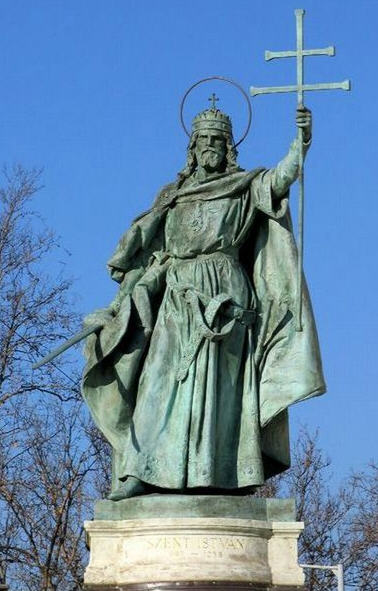