Aidan was gentle.   Aidan was personal.   Aidan was humble.   Aidan was compassionate. Aidan listened well.   Aidan prayed constantly.   Aidan cared for people’s lives, body, mind and spirit.   Aidan set people free from slavery.   He revealed a deep, quiet, almost easily overlooked way of evangelism and missionary life.   There is not much fanfare or miraculous flashy stuff in Aidan’s way of life and faith.   But where Aidan’s predecessor, Corman failed to reach into the hard hearts of the Anglo-Saxon people of Northumbria due to his harshness and austerity, the people loved Aidan and were deeply transformed by his brief 17 years among them, mainly because they were met face to face, heart to heart by a prayerful, gentle, holy man who brought the light of Christ through his actions and way of living.   The name Aidan means “fire, aflame”.   Aidan was aflame with Christ’s love.

The life of St Aidan of Lindisfarne, reminds us of the living Word of God in our lives.   St Aidan, following the teachings of Christ, was literally ready to expend every second of his life for Christ and his neighbour, with love, much as Christ did.   Today, how might we bring the Word of God to life—in our lives and in the lives of those we encounter?   It is this one word, “love”.

St Aidan of Lindisfarne, pray for us!

“Give me grace to amend my life
and to have an eye to mine end,
without grudge of death,
which to them that die in You,
good Lord,
is the gate of a wealthy life.” 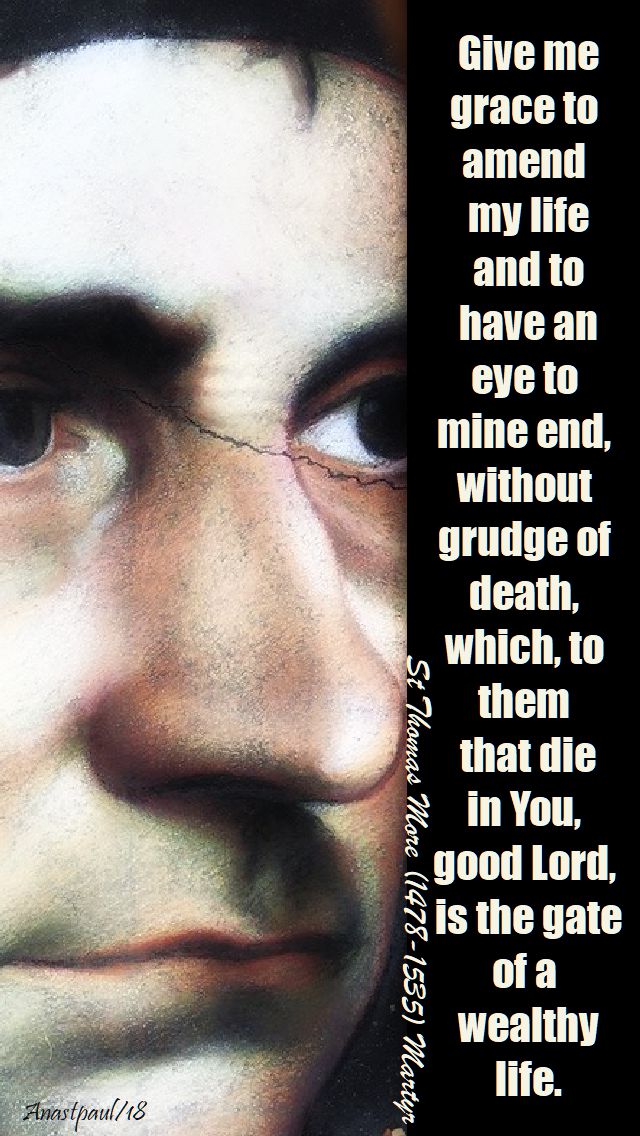 One Minute Reflection – 31 August – Friday of the Twenty-first week in Ordinary Time, Year B – Today’s Gospel: Matthew 25:1–13 and the memorial of St Aidan of Lindisfarne

But at midnight there was a cry, ‘Behold, the bridegroom! Come out to meet him.’ … Matthew 25:6

REFLECTION – “The souls’ husband is the Holy Spirit, by His grace.   When His interior inspiration calls the soul to repentance, then every enticement of vice is in vain.  The pride that wants command, the greed and lust that consumes everything:  this was the master that used to control and ravage the soul.   Their very names have been removed from the repentant sinner’s mouth…   When grace is poured into the soul and gives it light, God makes a covenant with sinners.   He is reconciled with them…   Then is celebrated the wedding of the bridegroom with His bride in the peace of a pure conscience.”…St Anthony of Padua (1195-1231) Doctor of the Church 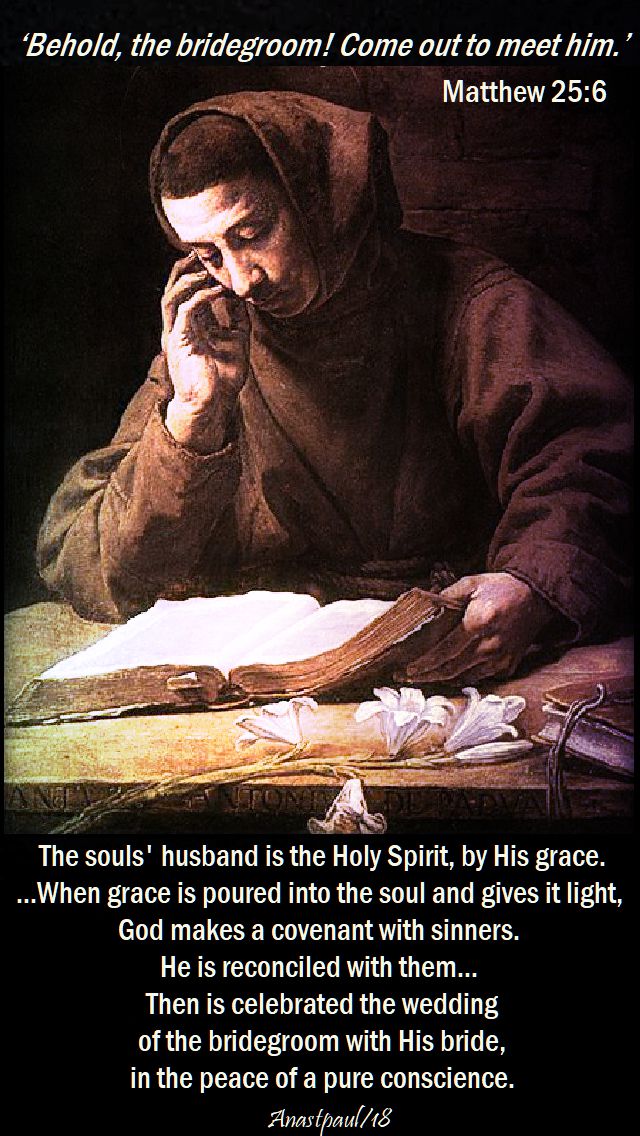 “You have been created for the glory of God and your own eternal salvation…..This is your goal!   This is the centre of your life;  this is the treasure of your heart.   If you reach your goal you will find happiness.   If you fail to reach it, you will find misery.”……St Robert Bellarmine (1542-1621) Doctor of the Church 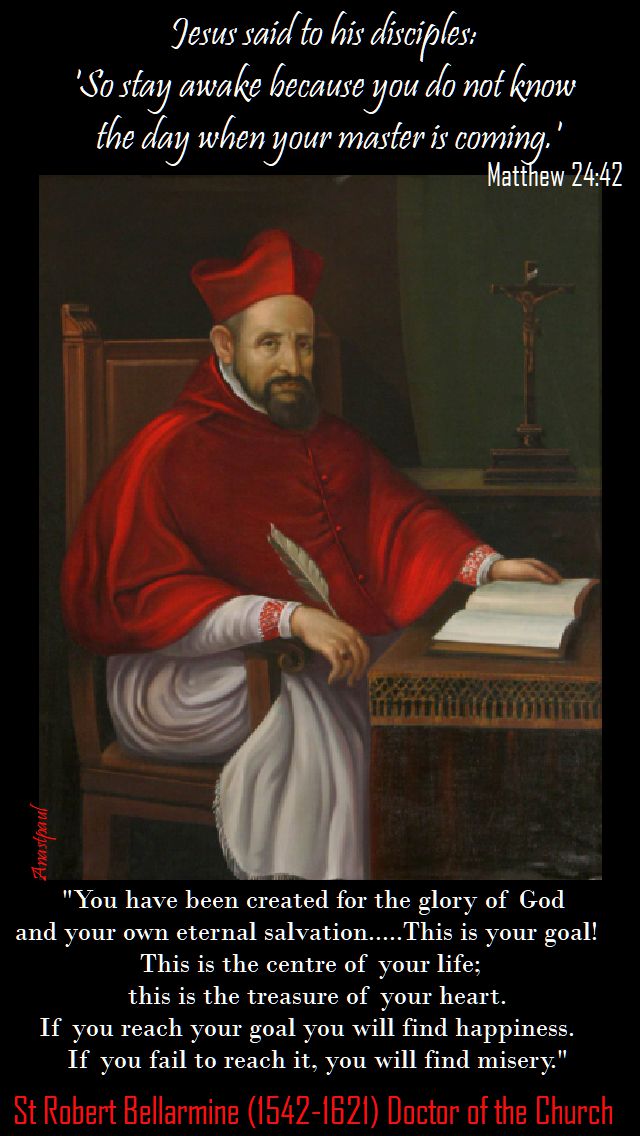 PRAYER – My Lord and my God, help me eternal Father, to stay awake! Teach me to be constantly on guard against my own weakness, to constantly keep watch for temptation and to live constantly in prayer, that Your Son will lead me to safety.   Grant that by the prayers of your holy servant, St Aidan of Lindisfarne, who always remained prayerful and awake, waiting for the Lord, we may be ready to meet the bridegroom.    Through Jesus our Lord, with the Holy Spirit, one God forever,amen. 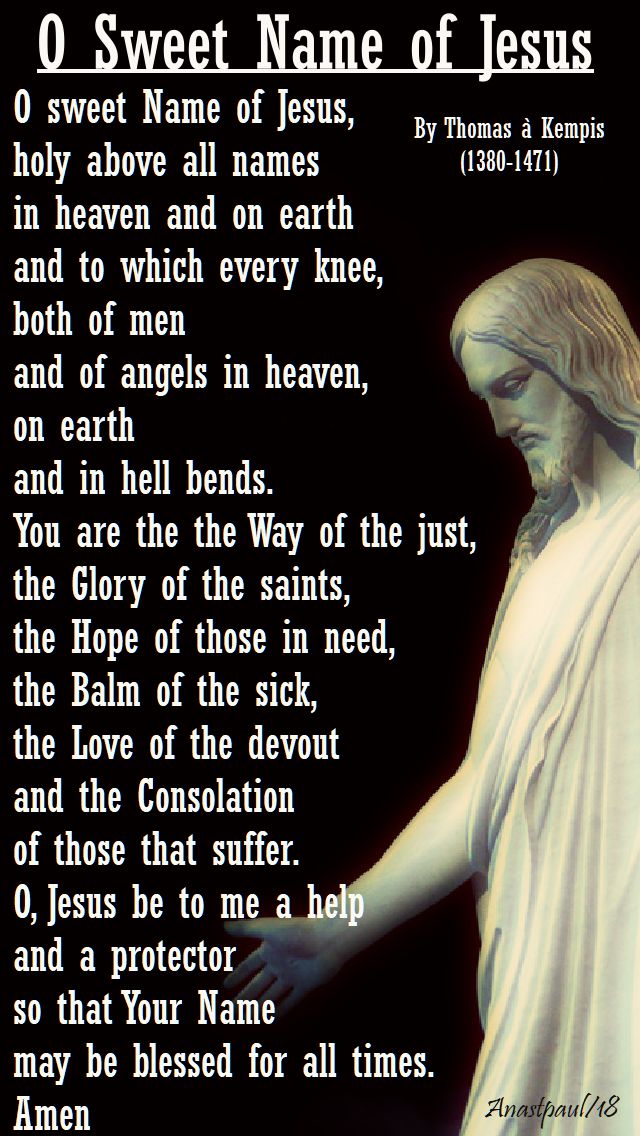 Saint of the Day – 31 August -St Aidan of Lindisfarne (died 651) Apostle of Northumbria – Bishop, Monk, Missionary, Abbot, Ascetic, Apostle of Charity  – born as (Irish: Naomh Aodhán) in Ireland and died on  31 August 651 at Bamburg, England of natural causes.   Patronages – Northumbria and firefighters.   St Aidan was an Irish monk and missionary credited with restoring Christianity to Northumbria.   He founded a monastic cathedral on the island of Lindisfarne, known as Lindisfarne Priory, served as its first bishop and travelled ceaselessly throughout the countryside, spreading the gospel to both the Anglo-Saxon nobility and to the socially disenfranchised (including children and slaves). 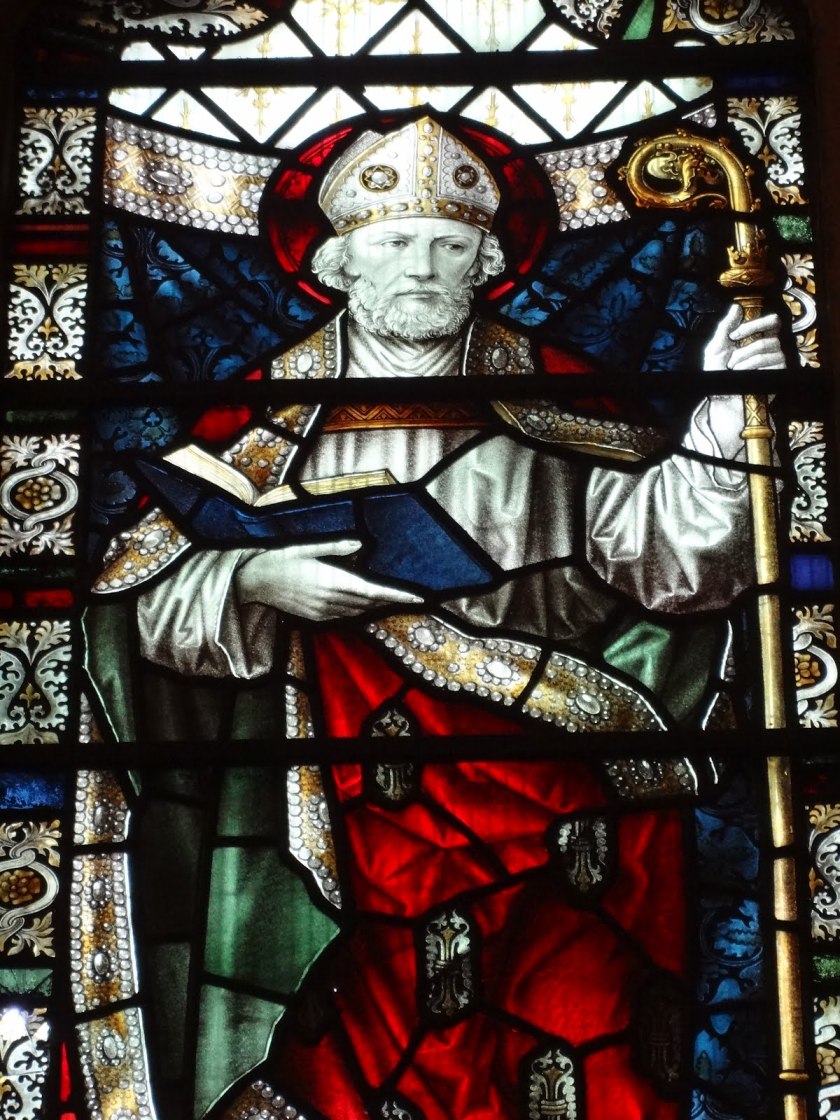 St Bede’s (673-735 Father & Doctor of the Church) meticulous and detailed account of Aidan’s life provides the basis for most biographical sketches (both classical and modern).   One notable lacuna, which (somewhat paradoxically) reinforces the notion of Bede’s reliability, is that virtually nothing is known of the monk’s early life, save that he was a monk at the ancient monastery on the island of Iona from a relatively young age and that he was of Irish descent.

In the years prior to Aidan’s mission, Christianity, which had been propagated throughout Britain but not Ireland by the Roman Empire, was being largely displaced by Anglo-Saxon paganism.   In the monastery of Iona (founded by Columba of the Irish Church), the religion soon found one of its principal exponents in Oswald of Northumbria, a noble youth who had been raised there as a king in exile since 616. Baptised as a Christian, the young king vowed to bring Christianity back to his people—an opportunity that presented itself in 634, when he gained the crown of Northumbria.

Owing to his historical connection to Iona’s monastic community, King Oswald requested that missionaries be sent from that monastery instead of the Roman-sponsored monasteries of Southern England.   At first, they sent him a bishop named Cormán, but he alienated many people by his harshness and returned in failure to Iona reporting that the Northumbrians were too stubborn to be converted.   Aidan criticised Cormán’s methods and was soon sent as his replacement.   He became bishop in 635.

Allying himself with the pious king, Aidan chose the island of Lindisfarne, which was close to the royal castle at Bamburgh, as the seat of his diocese.   An inspired missionary, Aidan would walk from one village to another, politely conversing with the people he saw and slowly interesting them in Christianity –  in this, he followed the early apostolic model of conversion, by offering “them first the milk of gentle doctrine, to bring them by degrees, while nourishing them with the Divine Word, to the true understanding and practice of the more advanced precepts.”   By patiently talking to the people on their own level (and by taking an active interest in their lives and communities), Aidan and his monks slowly restored Christianity to the Northumbrian countryside.   King Oswald, who after his years of exile had a perfect command of Irish, often had to translate for Aidan and his monks, who did not speak English at first. 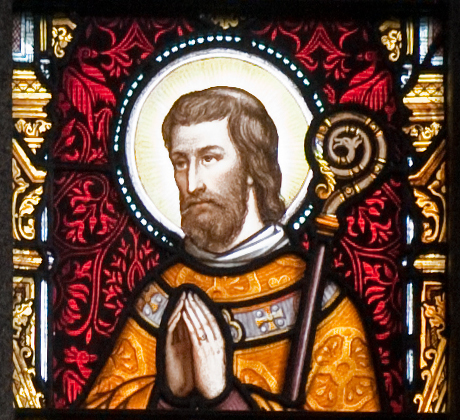 In his years of evangelism, Aidan was responsible for the construction of churches, monasteries and schools throughout Northumbria.   At the same time, he earned a tremendous reputation for his pious charity and dedication to the less fortunate—such as his tendency to provide room, board and education to orphans and his use of contributions to pay for the freedom of slaves.

“He was one to traverse both town and country on foot, never on horseback, unless compelled by some urgent necessity and wherever in his way, he saw any, either rich or poor, he invited them, if infidels, to embrace the mystery of the faith or if they were believers, to strengthen them in the faith, and to stir them up by words and actions to alms and good works. … This [the reading of scriptures and psalms and meditation upon holy truths] was the daily employment of himself and all that were with him, wheresoever they went and if it happened, which was but seldom, that he was invited to eat with the king, he went with one or two clerks, and having taken a small repast, made haste to be gone with them, either to read or write.

At that time, many religious men and women, stirred up by his example, adopted the custom of fasting on Wednesdays and Fridays, till the ninth hour, throughout the year, except during the fifty days after Easter.

He never gave money to the powerful men of the world but only meat, if he happened to entertain them and, on the contrary, whatsoever gifts of money he received from the rich, he either distributed them, as has been said, to the use of the poor, or bestowed them in ransoming such as had been wrong fully sold for slaves.   Moreover, he afterwards made many of those he had ransomed his disciples, and after having taught and instructed them, advanced them to the order of priesthood.” (St Bede)

The monastery he founded grew and helped found churches and other religious institutions throughout the area.   It also served as centre of learning and a storehouse of scholarly knowledge, training many of Aidan’s young charges for a career in the priesthood.   Though Aidan was a member of the Irish branch of Christianity (instead of the Roman branch), his character and energy in missionary work won him the respect of Pope Honorius I and Felix of Dunwich. 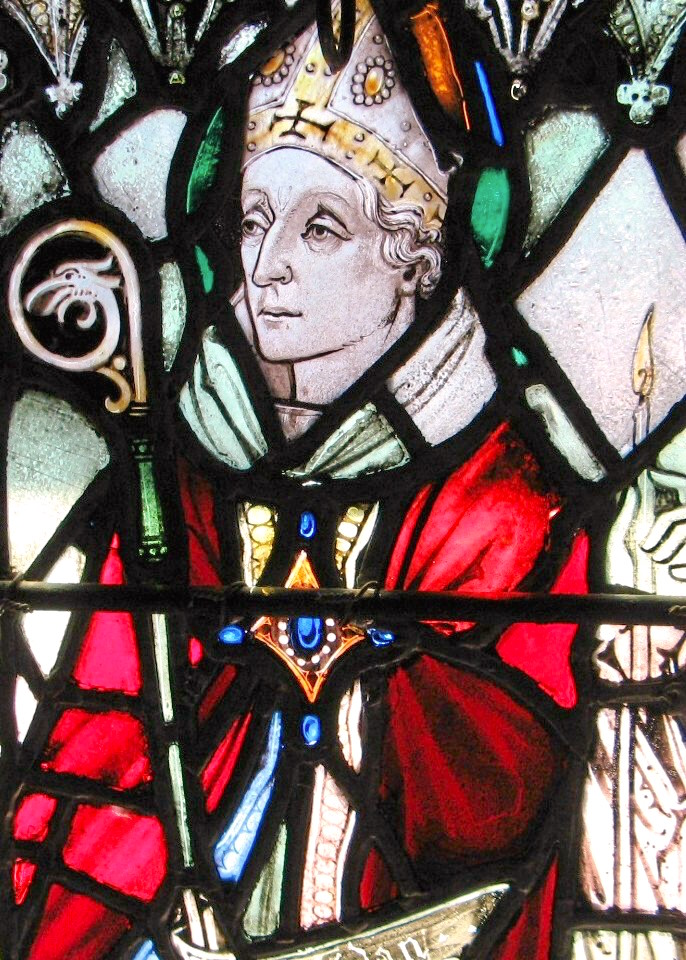 When Oswald died in 642, Aidan received continued support from King Oswine of Deira and the two became close friends.  As such, the monk’s ministry continued relatively unchanged until the rise of pagan hostilities in 651.   At that time, a pagan army attacked Bamburgh and attempted to set its walls ablaze.   According to legend, Aidan saw the black smoke from his cell at Lindisfarne Abbey, immediately recognised its cause and knelt in prayer for the fate of the city.   Miraculously, the winds abruptly reversed their course, blowing the conflagration towards the enemy, which convinced them that the capital city was defended by potent spiritual forces.   Around this time, Oswine was betrayed and murdered.   Two weeks later Aidan died, on 31 August 651.   He had become ill while on one of his incessant missionary tours and died leaning against the wall of the local church.   As Baring-Gould poetically summarises: “It was a death which became a soldier of the faith upon his own fit field of battle.”

After his death, Aidan’s body was buried at Lindisfarne, beneath the abbey that he had helped found.   Though his popularity waned in the coming years, “in the 11th century Glastonbury monks obtained some supposed relics of Aidan through their influence Aidan’s feast appears in the early Wessex calendars, which provide the main evidence for his cult after the age of Bede.” 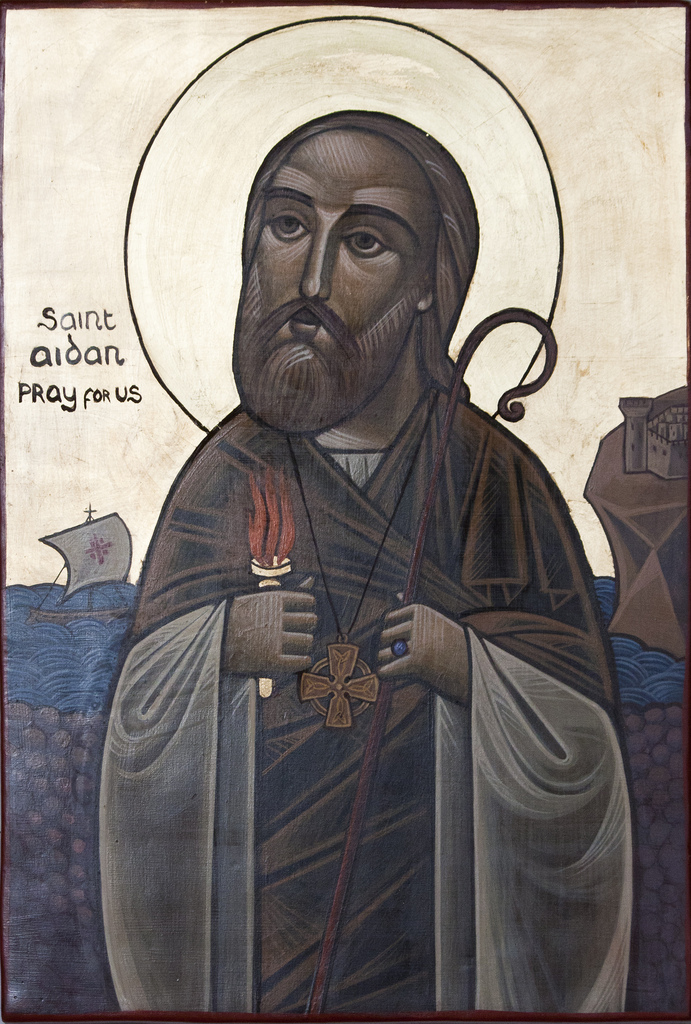 His feast is celebrated on the anniversary of his death, 31 August.   Reflecting his Irish origins, his Scottish monasticism and his ministry to the English, Aidan has been proposed as a possible patron saint of the United Kingdom.

Today, Aidan’s significance is still recognised in the following saying by Joseph Lightfoot, Bishop of Durham: 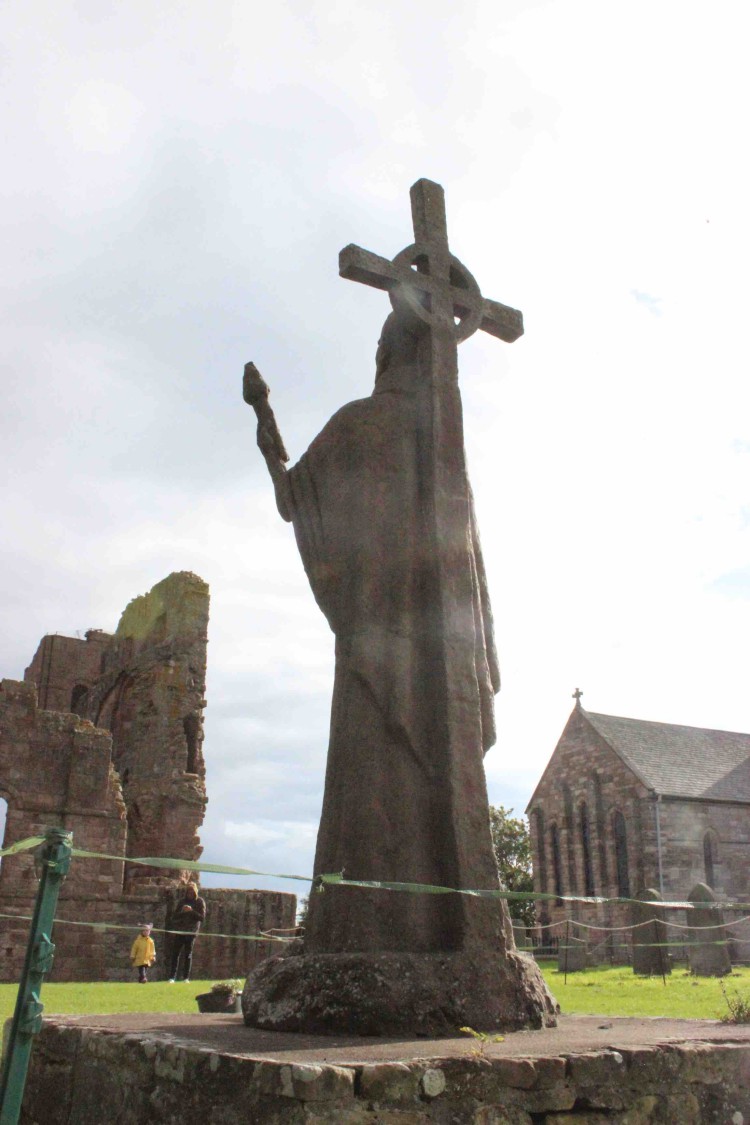 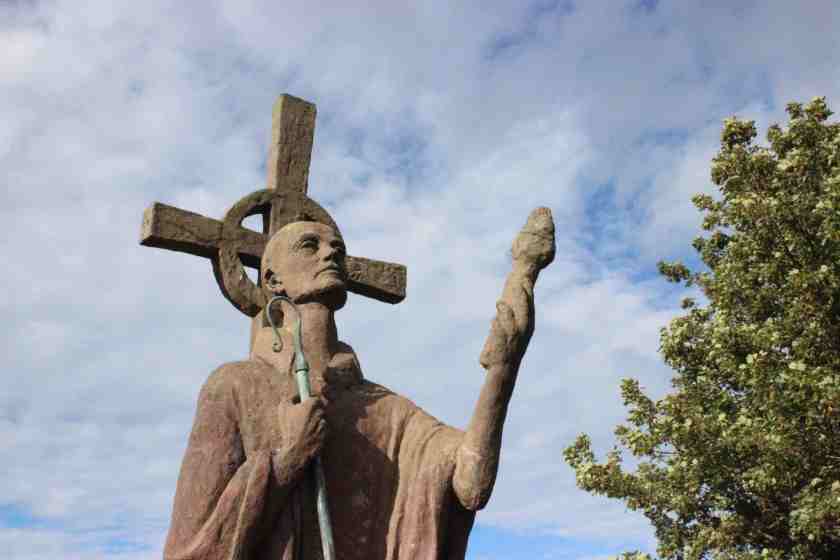