Who can begin to imagine how the smallest of our actions, done in love of God and neighbour, can lead to immense results?   For we know that the mustard seed is tiny and grows into the greatest of shrubs.

When St Rose began taking in the destitute, the old and infirm, the poor and the sick, could she have dreamed that this small service would become the beginning of social services in Peru?   Moreover, she became known and loved throughout Peru and remains so, by rich and poor alike, who look to her for protection from calamity and for the protection of God, by her prayers.

City officials and senators, carried her body to its grave and she was revered as a saint from the moment she died, in fact whilst she lived.   It was impossible to hold her funeral for several days due to the immense crowds and so, she was finally buried privately.

St Rose found her own unique pathway to sanctity when her plans to become a nun were frustrated.   Remembering, all is God’s will, nothing is random or wasted, go forth, find a way and set the world on fire in your wedding garment!

Glorious St Rose of Lima,
you who knew, what it was to love Jesus
with such a fine and generous heart.
You, whom since infancy,
despised the world’s vanities
in order to embrace His Cross.
You who loved, with unfailing devotion,
our Heavenly Mother
and professed a great tender dedication
to the destitute,
serving them, in the same way, Jesus did.
Teach us to imitate your greatest virtues,
so that we, following your example,
may enjoy your glorious protection.
Through our Lord, Jesus Christ,
who lives and reigns forever.
Amen

St Rose of Lima, pray for us!

“Apart from the Cross
there is no other ‘ladder’
by which we might get to heaven.” 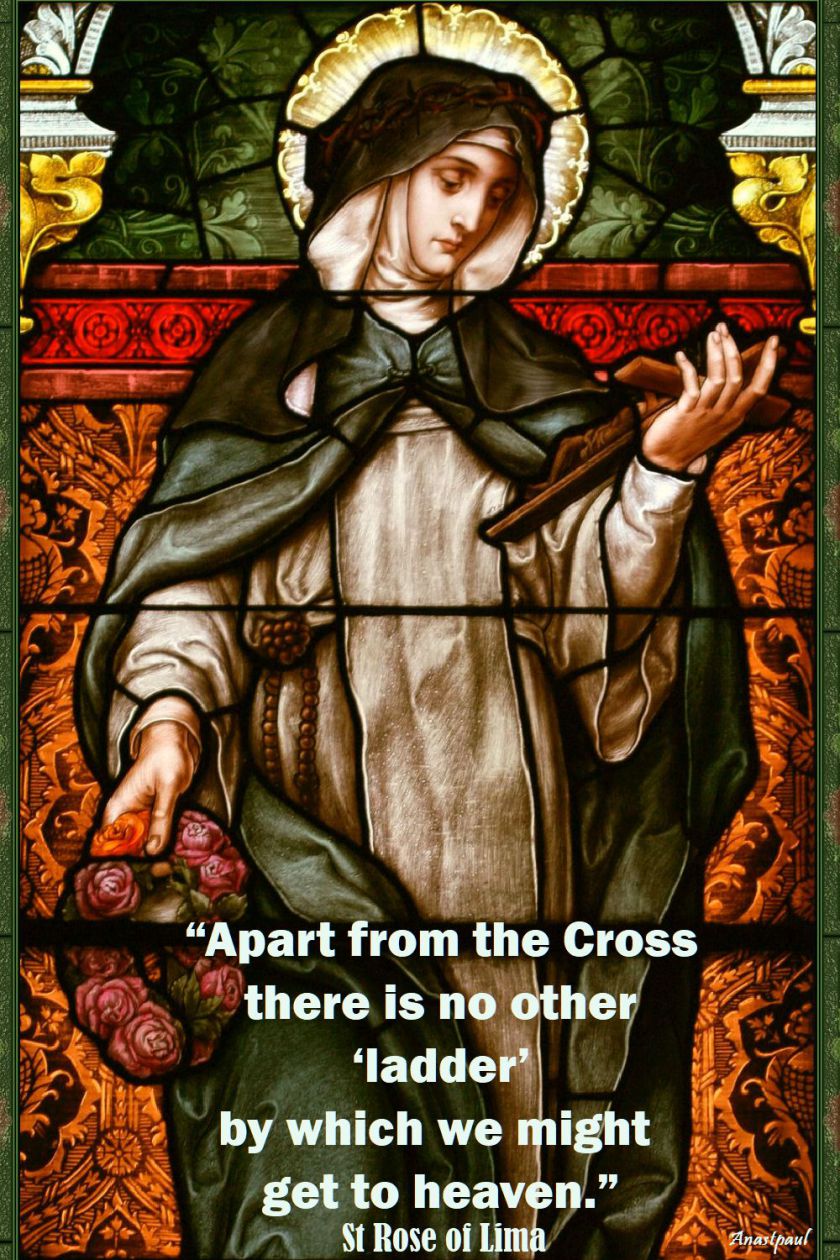 “We must not fail
to help our neighbours,
because in them we serve Jesus.”

“But when the king came in to look at the guests, he saw there a man who had no wedding garment and he said to him, ‘Friend, how did you get in here without a wedding garment?’...Matthew 22:11-12 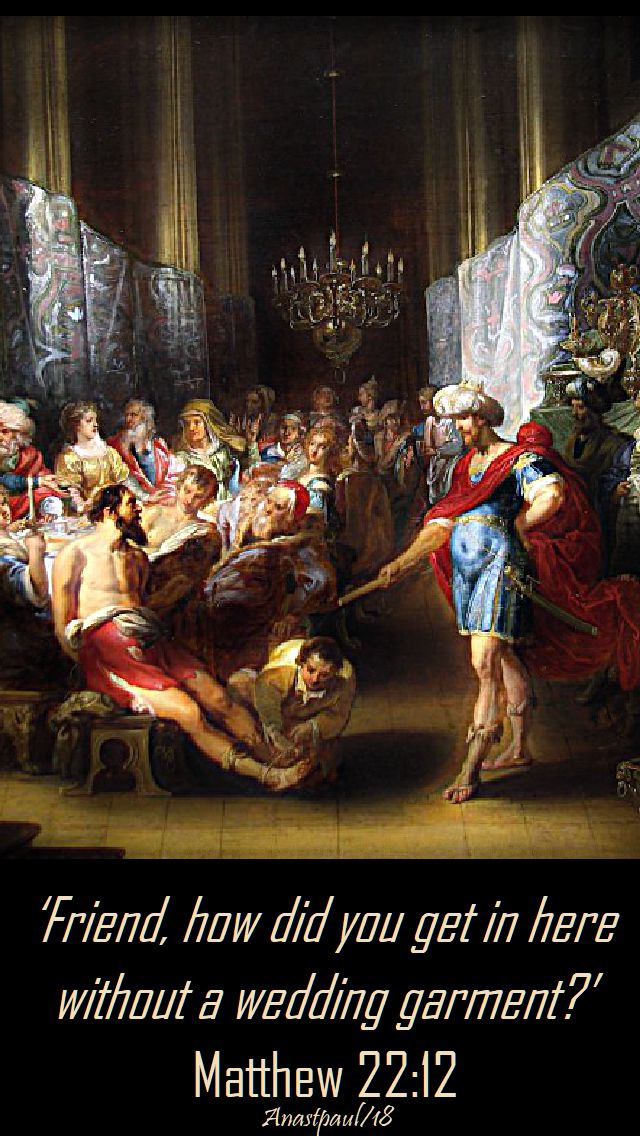 REFLECTION – “What is that “wedding garment” then? … The wedding garment” is such charity as this.   “Though I speak with the tongues of men and of Angels and have not charity, I am become as sounding brass and a tinkling cymbal.”   Tongues have come in alone and it is said to them, “How came ye in hither not having a wedding garment?” “Though,” said he, “I have the gift of prophecy and understand all mysteries and all knowledge and though I have all faith, so that I could remove mountains and have not charity, I am nothing.”   See, these are the miracles of men who very often have not “the wedding garment.”   “Though,” he says,” I have all these and have not Christ, I am nothing.” … If then I have not charity, though I bestow alms freely upon the poor, though I have come to the confession of Christ’s Name even unto blood and fire, these things may be done even through the love of glory and so are vain.
… For “the wedding garment” is taken in honour of the union, the union, that is, of the Bridegroom to the Bride.  You know the Bridegroom – it is Christ. You know the Bride – it is the Church.   Pay honour to the Bride, pay honour to the Bridegroom  . If you pay due honour to them both, you will be their children.   Therefore in this make progress.   Love the Lord and so learn to love yourselves, that when by loving the Lord, you shall have loved yourselves, you may securely love your neighbour as yourselves.
…So then, have faith with love.   This is the “wedding garment.”…St Augustine (354-430) Father & Doctor

“Thus, then, the obedient man,with the light of faith, in the truth burning in the furnace of charity … receives his end from Me, his Creator.”…St Catherine of Siena (1347-1380) Doctor of the Church

PRAYER – “God our Father, for love of You, St Rose of Lima left the world and gave herself to a life of penitence, austerity and charity.   Help us by her prayers, so to follow the path of life on earth, in complete love of You and thus of Your children, that we may obtain the fulness of joy in Your presence in heaven and be clothed fit for the wedding feast.   We make our prayer through Christ our Lord, in the unity of the Holy Spirit, one God forever, amen. 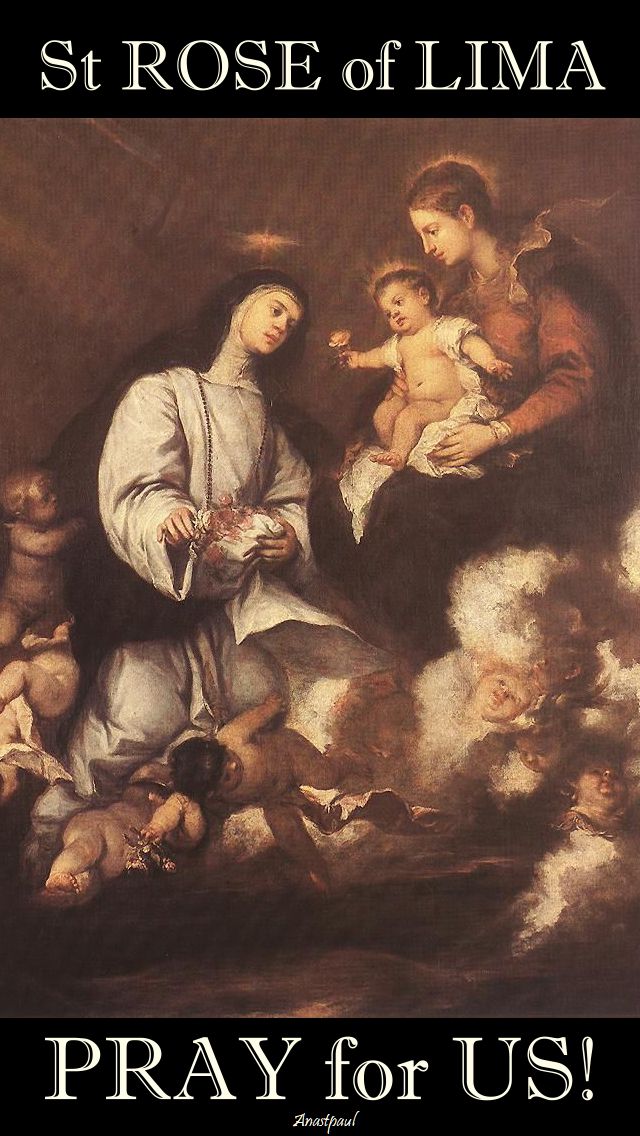 O God of Truth and Love

O omnipotent Father,
God of truth,
God of love,
permit me to enter into
the cell of self-knowledge.
I admit, that of myself, I am nothing,
but that all being
and goodness in me
comes solely from You.
Show me my faults,
that I may detest them,
and thus I shall flee from self-love
and find myself clothed again
in the nuptial robe of divine charity,
which I must have,
in order to be admitted
to the nuptials of life eternal.
Amen

St Catherine was St Rose’s model and both were, of course, Dominican Tertiaries.

Saint of the Day – 23 August – St Rose of Lima T.O.S.D. (1586-1617) Virgin and Penitent, Mystic, Visionary, Stigmatist (invisible), Apostle of the Poor – born on 20 April 1586 at Lima, Peru as Isabel Flores de Oliva and died on 24 August 1617 at Lima, Peru of natural causes.   Patronages – against vanity, embroiderers, florists, gardeners, needle workers, people ridiculed for their piety, Peru, Lima, Peru, Americas, Central America, Latin America, New World, South America, India, Philippines, West Indies, diocese of Santa Rosa, California, Villareal Samar, Philippines, World Youth Day 2011.   St Rose was a member of the Third Order of Saint Dominic in Lima, Peru, who became known for both her life of severe asceticism and her care of the needy of the city through her own private efforts.  She was the first person born in the Americas to be canonised as a saint.   She is the primary patroness of Peru and of the indigenous natives of Latin America.   Her image is featured on the highest denomination banknote of Peru.

This lovely flower of sanctity, was born at Lima in 1586.   She was christened Isabel but the beauty of her infant face earned for her the title of Rose, which she ever after bore.

As a child, while still in the cradle, her silence under a painful surgical operation proved the thirst for suffering already consuming her heart.   At an early age she took service to support her impoverished parents and worked for them day and night.   In spite of hardships and austerities her beauty ripened with increasing age and she was much and openly admired.   From fear of vanity she cut off her hair, blistered her face with pepper and her hands with lime.

For further security she enrolled herself in the Third Order of St Dominic, took St Catherine of Siena as her model and redoubled her penance.   Her cell was a garden hut, her couch a box of broken tiles.   Under her habit Rose wore a hair-shirt studded with iron nails, while, concealed by her veil, a silver crown armed with ninety points encircled her head.   More than once, when she shuddered at the prospect of a night of torture, a voice said, “My cross was yet more painful.”

The Blessed Sacrament seemed almost her only food.   Her love for it was intense.   When the Dutch fleet prepared to attack the town, Rose took her place before the tabernacle, and wept that she was not worthy to die in its defence.   All her sufferings were offered for the conversion of sinners and the thought of the multitudes in hell was ever before her soul.

She died in 1617, at the age of thirty-one on the date she had predicted.

Rose was beatified by Pope Clement IX on 10 May 1667 and Canonised on 12 April 1671, by Pope Clement X, the first in the Americas to be declared a saint.   Her shrine, alongside those of her friends St Martin de Porres (1585-1645) and St John Macias (also 1585-1645)), is located inside the convent of St Dominic in Lima.   Many miracles followed her death:  there were stories that she had cured a leper and that, at the time of her death, the city of Lima smelled like roses, roses also started falling from the sky.   Many places in the New World are named Santa Rosa after her. 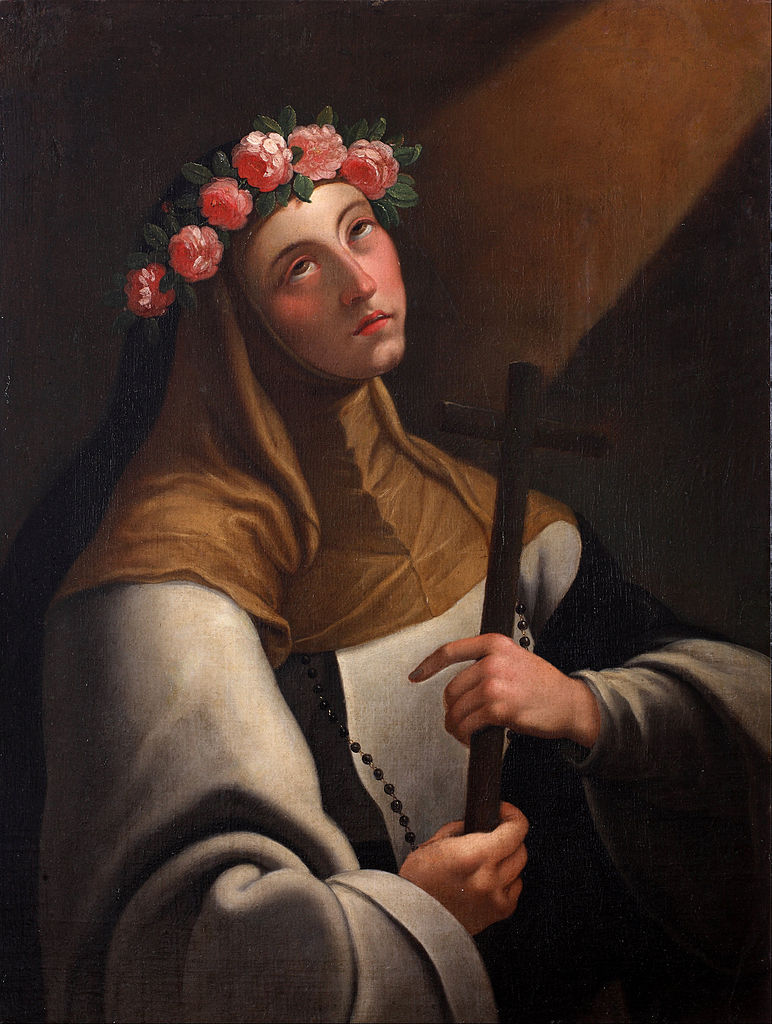 St Quiriacus of Ostia
St Theonilla of Aegea
St Timothy of Rheims
St Tydfil
St Victor of Vita
St Zaccheus of Jerusalem
—
Martyrs of Agea – 4 saints: A group of Christian brothers, Asterius, Claudius and Neon, denounced by their step-mother who were then tortured and martyred in the persecutions of Pro-consul Lysias. They were crucified in 285 outside the walls of Aegea, Cilicia (in Asia Minor) and their bodies left for scavengers.