Saint of the Day – 14 September – St Albert of Jerusalem (1149-1214) also known as St Albert of Vercelli – Bishop, Canon Lawyer, Diplomat and Peacemaker and is regarded as a Co-Founder of the Carmelite Order.   He was Bishop of Bobbio and Bishop of Vercelli and served as mediator and diplomat under Pope Clement III.   Pope Innocent III appointed him Patriarch of Jerusalem in 1204 or 1205.   In Jerusalem, he contributed the Carmelite Rule of St Albert to the newly-founded Carmelite Order.

Saint Albert was born towards the middle of the 12th century in Castel Gualtieri in Emilia, Italy.   He entered the Canons Regular of the Holy Cross at Mortara, Pavia and became Prior there in 1180.   In 1184, he was named bishop of Bobbio and the following year he was transferred to Vercelli which he governed for twenty years.    During this period, he undertook diplomatic missions of national and international importance with rare prudence and firmness – in 1194, he effected a peace between Pavia and Milan and, five years later, also between Parma and Piacenza. 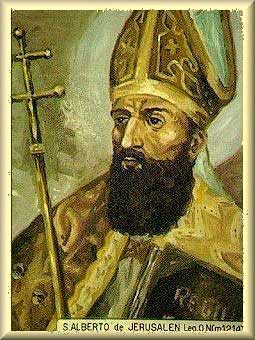 In 1191, he celebrated a diocesan synod which proved of great value for its disciplinary provisions which continued to serve as a model until modern times.   He was also involved in a large amount of legislative work for various religious orders – he wrote the statutes for the canons of Biella and was among the advisers who drew up the Rule of the Humiliates.

In 1205, Albert was appointed Patriarch of Jerusalem and a little later nominated Papal Legate for the ecclesiastical province of Jerusalem.   He arrived in Palestine early in 1206 and lived in Acre because, at that time, Jerusalem was occupied by the Saracens.   In Palestine, Albert was involved in various peace initiatives, not only among Christians but also between the Christians and non-Christians and he carried out his duties with great energy.

During his stay in Acre he gathered together the hermits on Mount Carmel and gave them a Rule.  On 14 September 1214, during a procession, he was stabbed to death by the Master of the Hospital of the Holy Spirit, whom Albert had reprimanded and deposed for his evil life, while taking part in a procession on the Feast of the Exaltation of the Holy Cross.

He is honoured by the Carmelites on 17 September. 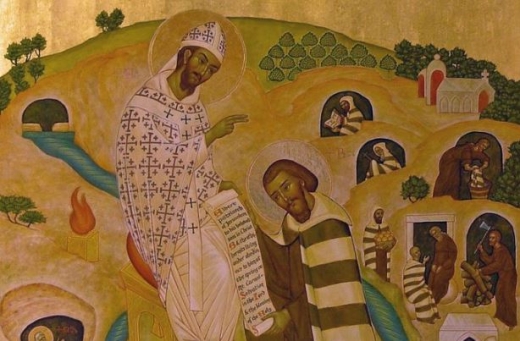