“Nevertheless, do not rejoice because the spirits are subject to you but rejoice, because your names are written in heaven.”
At that very moment he rejoiced in the Holy Spirit and said, “I give you praise, Father, Lord of heaven and earth, for although you have hidden these things from the wise and the learned you have revealed them to the babes…” Luke 10:20-21 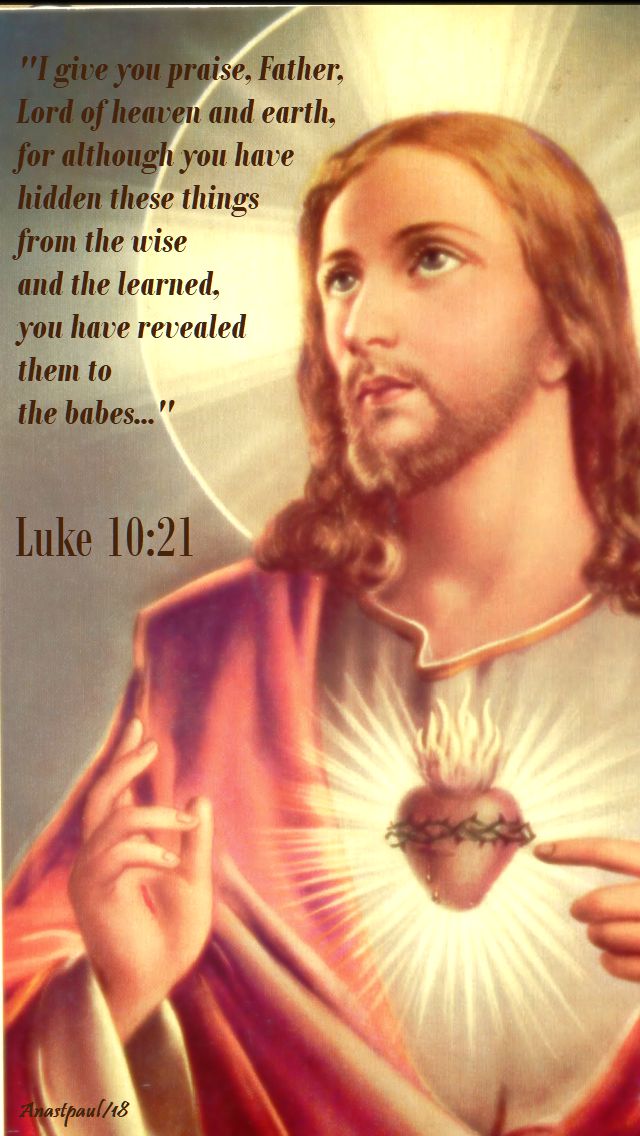 REFLECTION – “We were chosen out of love and this is our identity.
I have chosen this religion, I have chosen?… NO, you have not chosen.
He is the one who chose you, called you and bound Himself to you.
And this is our faith.   If we do not believe this, we do not understand what the message of Christ is and then we do not understand the Gospel.
He fell in love with our smallness and for this reason He chose us.   And He chooses the little ones – not the great, the little ones.   If you want to understand something of the mystery of Jesus, lower yourself, make yourself small.   Recognise that you are nothing. And not only does He choose and reveal Himself to the little ones but He calls the little ones:  ‘Come to me, all you who are tired and oppressed, I will give you rest’.   But does He not call the gre  at? His heart is open but the great cannot hear His voice because they are full of themselves.   To listen to the voice of the Lord, one must become small.”….Pope Francis – Santa Marta, 23 June 2017

PRAYER – Lord God, You called St Bruno to serve You in a life of solitude. Amidst this world’s changes, help us, by his prayers, to set out hearts always on You.   Heavenly Father, let me realise that You guide our lives through Your Providence, Your Word and Sacraments.   Help me to be obedient to the rules for my state in life and so be obedient to Your will for me.   Grant that the prayers of St Bruno may assist us as we strive to grow in humility.   Through our Lord, Jesus Christ, Your Son in union with the Holy Spirit, one God forever and ever, amen. 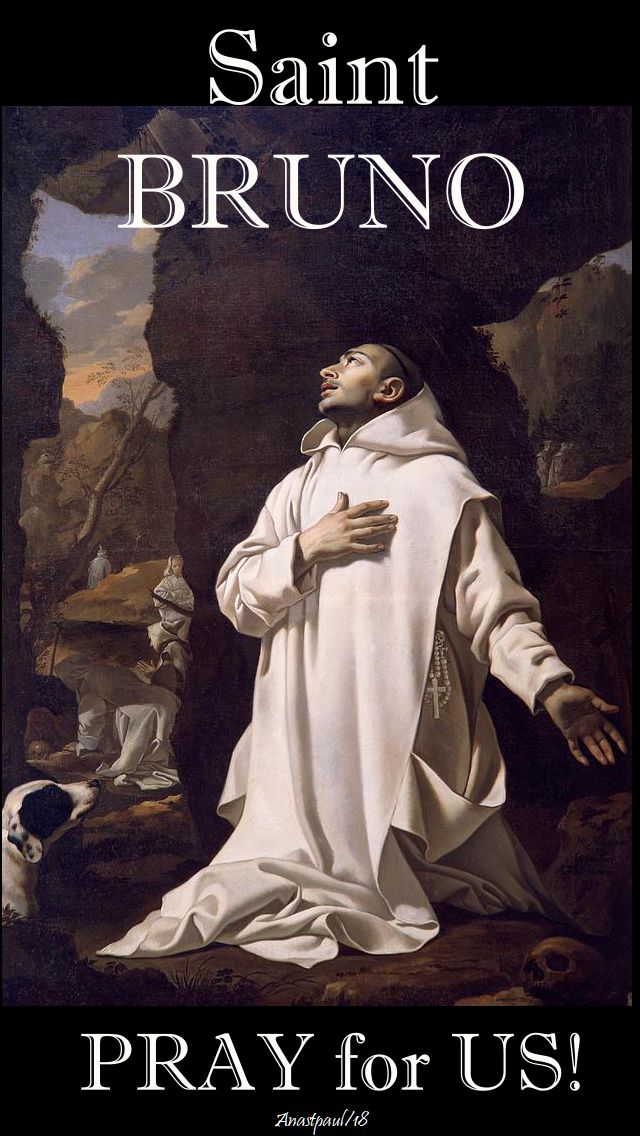 Leading up to the feast day of Saint John Paul the Great on 22 October, I invite you to join me in prayer to ask for his powerful intercession as well as learn something new about him each day.

St John Paul, Pray for us!

October – The Month of the Holy Rosary
REMINDER

of the Prayers to be conclude the Rosary each day of October (most especially) but I will add these always.

“The Holy Father has decided to invite all the faithful, of all the world, to pray the Holy Rosary every day, during the entire Marian month of October and thus to join in communion and in penitence, as the people of God, in asking the Holy Mother of God and Saint Michael Archangel to protect the Church from the devil, who always seeks to separate us from God and from each other.”

The invocation “Sub tuum praesídium” is recited as follows:

We fly to Thy protection,
O Holy Mother of God.
Do not despise our petitions
in our necessities
but deliver us always
from all dangers,
O Glorious and Blessed Virgin

The Holy Father has also asked that the recitation of the Holy Rosary during the month of October conclude with the prayer written by Pope Leo XIII:

Saint Michael Archangel,
defend us in battle,
be our protection against the wickedness
and snares of the devil,
may God rebuke him, we humbly pray
and do thou, O Prince of the heavenly host,
by the power of God, cast into hell Satan
and all the evil spirits,
who prowl throughout the world
seeking the ruin of souls.
Amen

St. Bruno was one of the most exceptional scholars, teachers, prayer warriors of his time:
“…a prudent man whose word was rich in meaning.”   I think the key was the gift of great humility.

The Order founded by Bruno — the Carthusians — is one of the strictest in the Church. Carthusians follow the Rule of St Benedict but accord it a most austere interpretation, there is perpetual silence and complete abstinence from flesh meat (only bread, legumes and water are taken for nourishment). Bruno sought to revive the ancient eremitical (hermit) way of life.   His Order enjoys the distinction of never becoming unfaithful to the spirit of its founder, never needing a reform.

Bruno and his friends built an oratory with small individual cells at a distance from each other.   They met for Matins and Vespers each day and spent the rest of the time in solitude, eating together only on great feasts.   Their chief work was copying manuscripts.

Hearing of Bruno’s holiness, the pope called for his assistance in Rome.   When the pope had to flee Rome, Bruno pulled up stakes again and after refusing a bishopric, spent his last years in the wilderness of Calabria.

Silence in the Statutes:

What benefits
What divine exultation
The solitude and silence of the desert
Hold in store for those who love it! 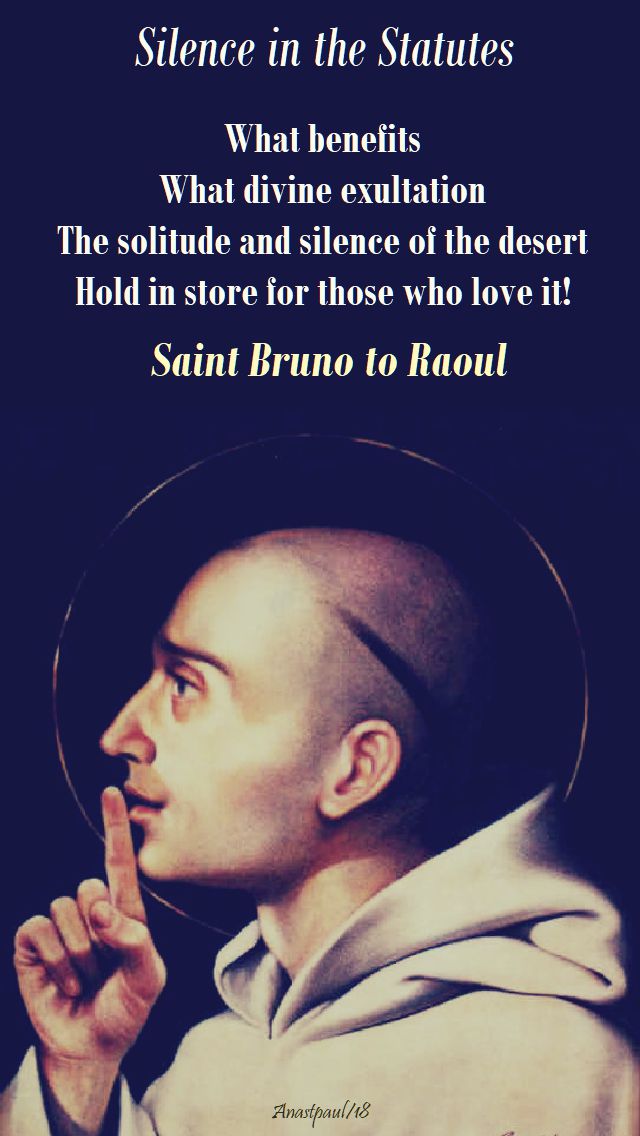 Bruno was never formally canonised, because the Carthusians were averse to all occasions of publicity.   However, Pope Clement X extended his feast to the whole Church in 1674.

“Rejoice, my dearest brothers, because you are blessed and because of the bountiful hand of God’s grace upon you.
Rejoice, because you have escaped the various dangers and shipwrecks of the stormy world.
Rejoice because you have reached the quiet and safe anchorage of a secret harbour. Many wish to come into this port and many make great efforts to do so, yet do not achieve it. Indeed many, after reaching it, have been thrust out, since it was not granted them from above.
By your work you show what you love and what you know.
When you observe true obedience with prudence and enthusiasm, it is clear that you wisely pick the most delightful and nourishing fruit of divine Scripture.”

from a letter by Saint Bruno to the Carthusians

May we mirror Bruno’s quest for holiness and unity with God.

St Bruno, Pray for Us!

“If the bow is stretched for too long,
it becomes slack and unfit for its purpose.” 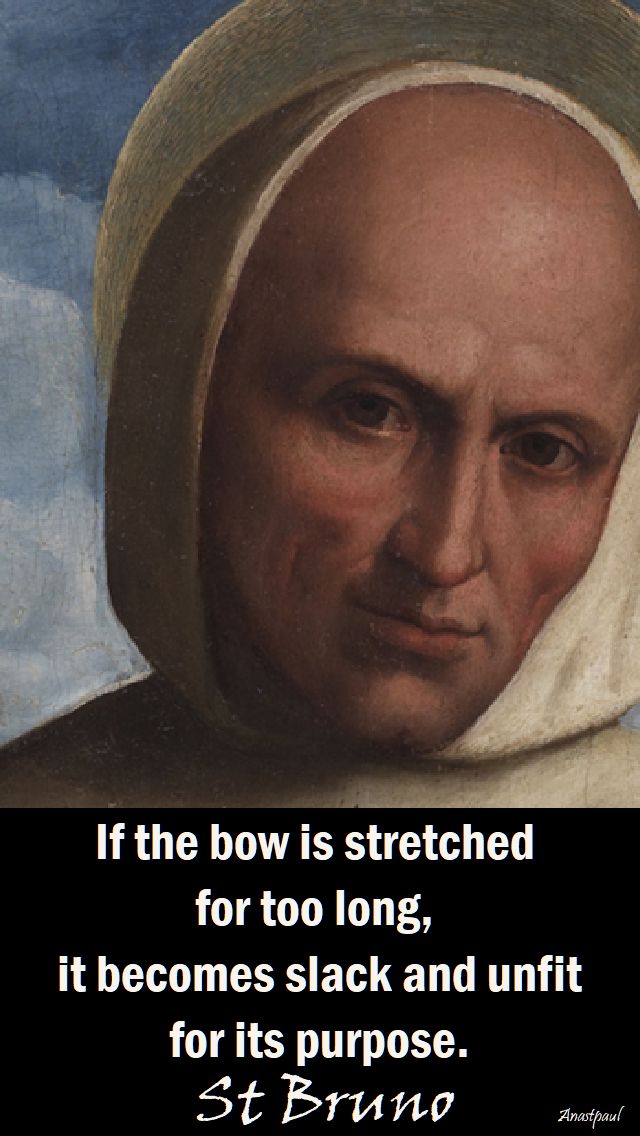 “No act is charitable if it is not just.”

““By your work,
you show what you love
and what you know.”

“While the world changes,
the Cross stands firm.” 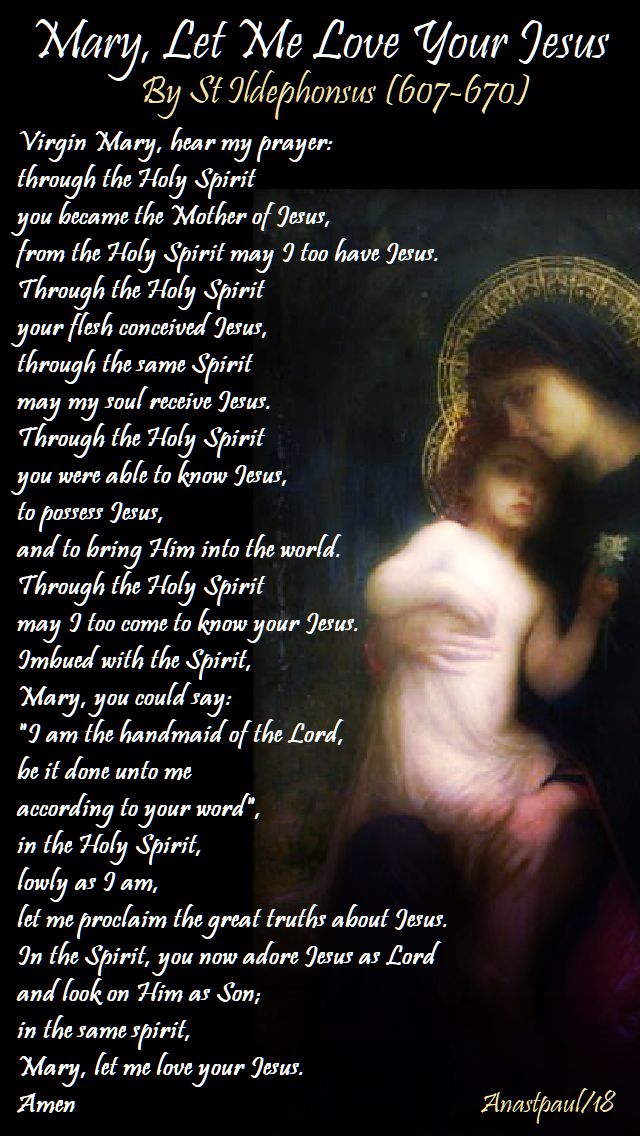 The tenth child of Olivier and Geneviève Durocher, Eulalie Durocher was born on 6 October 1811 to a well-respected family in Saint-Antoine-sur-Richelieu (Québec).   Eulalie received her initial education on the lap of her mother, a former student of the Ursuline Sisters in Quebec City and from her grandfather, a former soldier and defender of Fort Carillon.   She went on to attend boarding school with the Sisters of the Congregation of Notre Dame in Saint-Denis-sur-Richelieu for two years.   Despite her frailty, she was a lively and joyous child.   At the same time, health problems made it impossible for her to continue her studies and her dream of religious life seemed to be out of reach.

As a teenager, Eulalie proudly rode her beautiful horse Caesar to visit friends, the sick, and the less fortunate in her village.   She also loved to spend time praying in the church and adoring Jesus present in the Tabernacle.   Eulalie was eighteen when her mother died.   This was a very difficult time in her life but the young woman courageously stepped in to take charge of the household.

Shortly afterward, her brother Théophile, who had been appointed pastor of Beloeil, invited his father and sister to live with him in the presbytery of St Matthew’s parish. Manager and hostess of the presbytery, Eulalie welcomed visiting priests to the presbytery and worked diligently for the parish and local community for 12 years (1831-1843).   In company with her friend, Mélodie Dufresne, Eulalie visited the destitute, taught catechism to the children, organised liturgical celebrations, supported families through difficult times and mobilised other parish volunteers to concerted action.

With the arrival of the Oblates of Mary Immaculate in Saint-Hilaire, in 1841, Eulalie lent her enthusiastic support to their evangelisation efforts and founded the Association of the Children of Mary, the first organisation of its kind in Canada.   Her outreach and joyous personality attracted and transformed many young women. 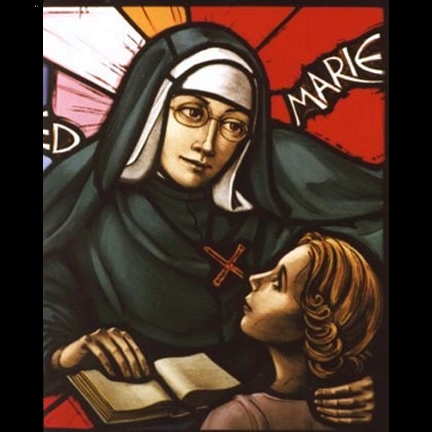 Her years in Beloeil marked a very important phase in her life.   Keenly aware of the political situation and the needs of the country, Eulalie deplored the poor level of religious instruction and the lack of schools, particularly for girls.   Her desire to enter religious life remained with her, and she dreamed of the day when small convents could be established in the parishes.   She was ready to join a religious community that Bishop Ignace Bourget was planning to bring to Québec from France.

To her great disappointment, the Sisters from Marseille were unable to come to Canada. Aware of her hopes and abilities, Bishop Bourget asked Eulalie Durocher to found a community herself.   On 28 October 1843, Eulalie and Mélodie Dufresne came to live with Henriette Céré, who was already teaching at the parish school in Longueuil.   Their house, which was provided by the pastor, Father Moïse Brassard, would serve as the cradle of the Congregation.

Being initiated into the religious life and starting an entirely new educational project was not an easy task, particularly as its pioneer women faced a series of obstacles from outright opposition, poverty, criticism and a lack of understanding.   However, a profound faith, open-mindedness and an ardent love for young people enabled them to lay a solid foundation for the Institute. 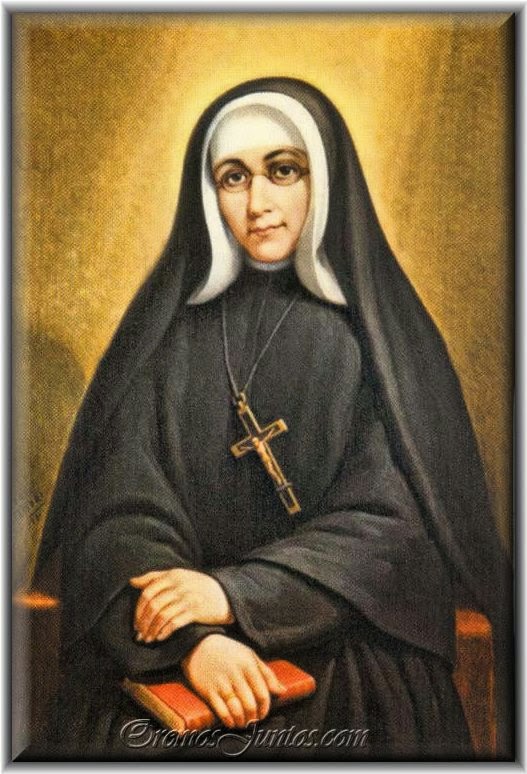 Under the name Mother Marie Rose, Eulalie was able to reach out to talented women and to provide them with excellent pedagogical preparation.   The Brothers of the Christian Schools and the Oblates of Mary Immaculate lent vital assistance.   According to her vision, each child must receive a well-rounded education: spiritually, academically, artistically and socially.

During the lifetime of the foundress, four houses were established – the convents in Longueuil, Beloeil, Saint-Lin and Saint-Timothée.   In an effort to make education available to many more, Mother Marie Rose wanted a school to be built adjacent to each boarding school, where the same program could be offered free of charge to others, thanks to the income from the boarding schools.

Mother Marie-Rose provided leadership to the fledgling congregation until her premature death in 1849.   Testimonies gathered at that time attest to the sanctity of her life, which was entirely dedicated to God and to people around her.   On the occasion of her Beatification in Rome on 23 May 1982, the Church declared Marie-Rose Durocher an apostolic woman and a herald of new times.

Her remains have rested in the Marie-Rose Chapel at the co-Cathedral in Longueil since 2004.