Little Known Fact #4:  In his second assignment as a newly ordained priest, Father Karol Wojtyla took a new approach to training altar boys.   He would hold frequent evenings of instruction, whereby one priest would give catechesis to the boys while another priest taught the parents educational psychology as well as catechesis in the liturgy.   In addition to these meetings, Father Wojtyla and the other parish priests would take the boys on outings.   This model proved to be a great success as the number of altar boys went from 10 in 1946 to 100 in 1952.

REFLECTION:   ” In the first years of his pontificate, still young and full of energy, the Holy Father went to the very ends of the earth, guided by Christ.   But afterwards, he increasingly entered into the communion of Christ’s sufferings;  increasingly he understood the truth of the words:  “Someone else will fasten a belt around you.”   And in this very communion with the suffering Lord, tirelessly and with renewed intensity, he proclaimed the Gospel, the mystery of that love which goes to the end (cf Jn 13:1).” – Pope Benedict

Quote Day Four:  “A society will be judged on the basis of how it treats its weakest members;  and among the most vulnerable are surely the unborn and the dying.”

Although his life was short, he managed to achieve great holiness.   So numerous were the miracles God worked through him, that even during his lifetime he was called the“ wonder-worker “.

Since his death in 1775, countless favours and miracles have been granted and worked through his intercession.   (In this regard, I know personally of a miracle granted by St Gerard’s intercession.)

The League of St Gerard is an association of Christians united in prayer for family life and its Christian values.

The League Prayer is on the site but I copied it here too.

Membership is open to all.
All information here:   http://www.redemptorists.co.uk/what-we-do/league-of-st-gerard/1697-st-gerard-family-league.html

St Gerard Majella, Pray for Us! 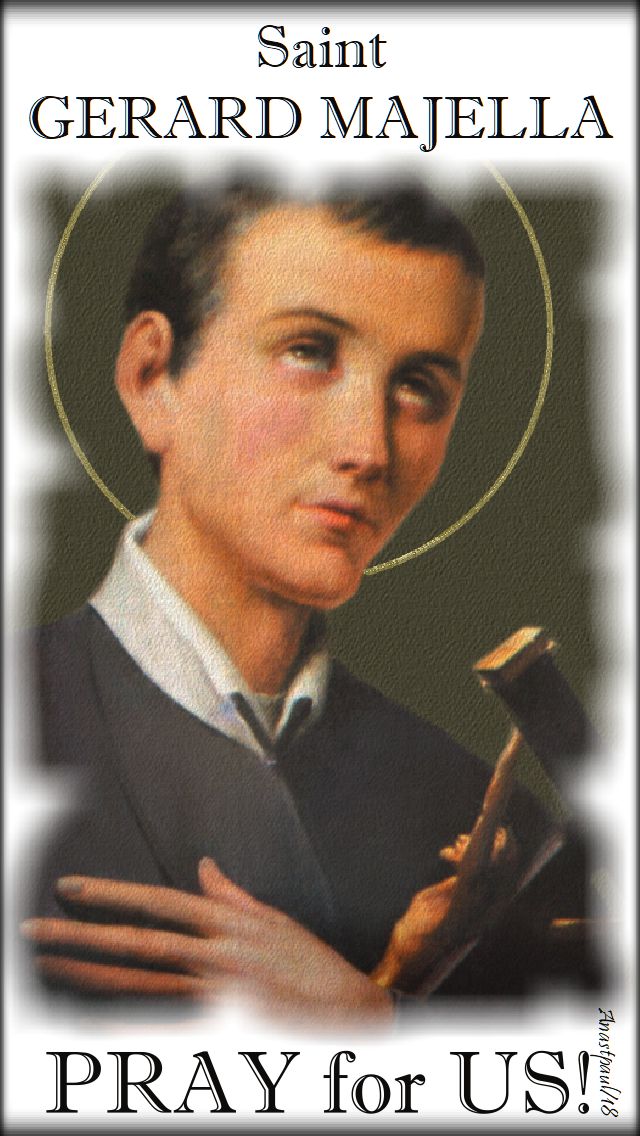 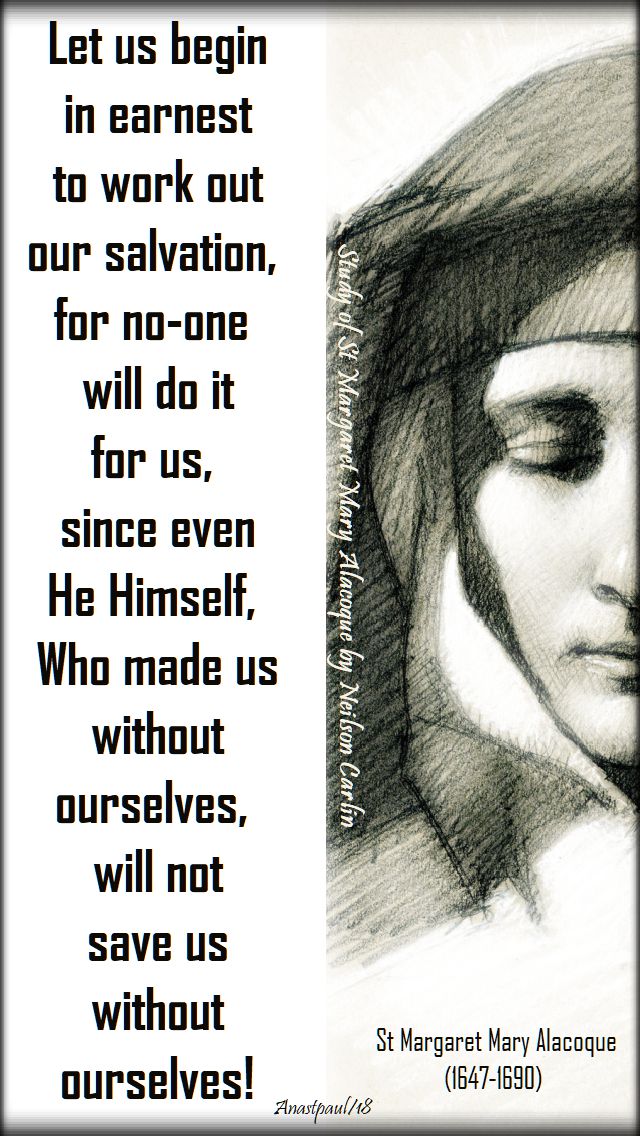 “Let every knee bend before You,
O greatness of my God,
so supremely humbled in the Sacred Host.
May every heart love You,
every spirit adore You
and every will be subject to You! 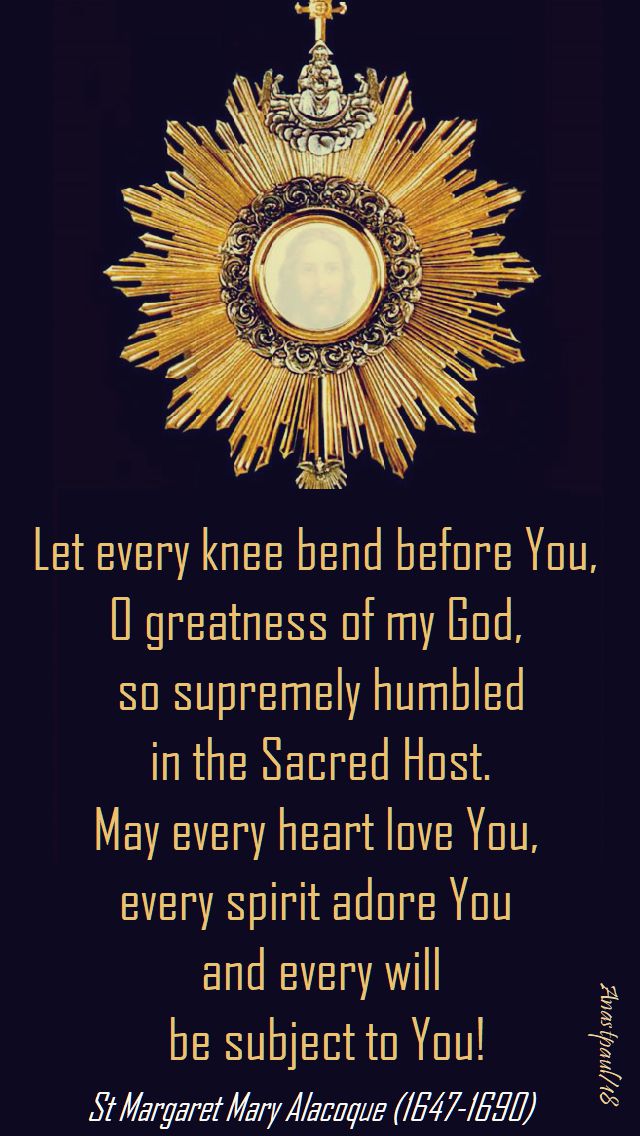 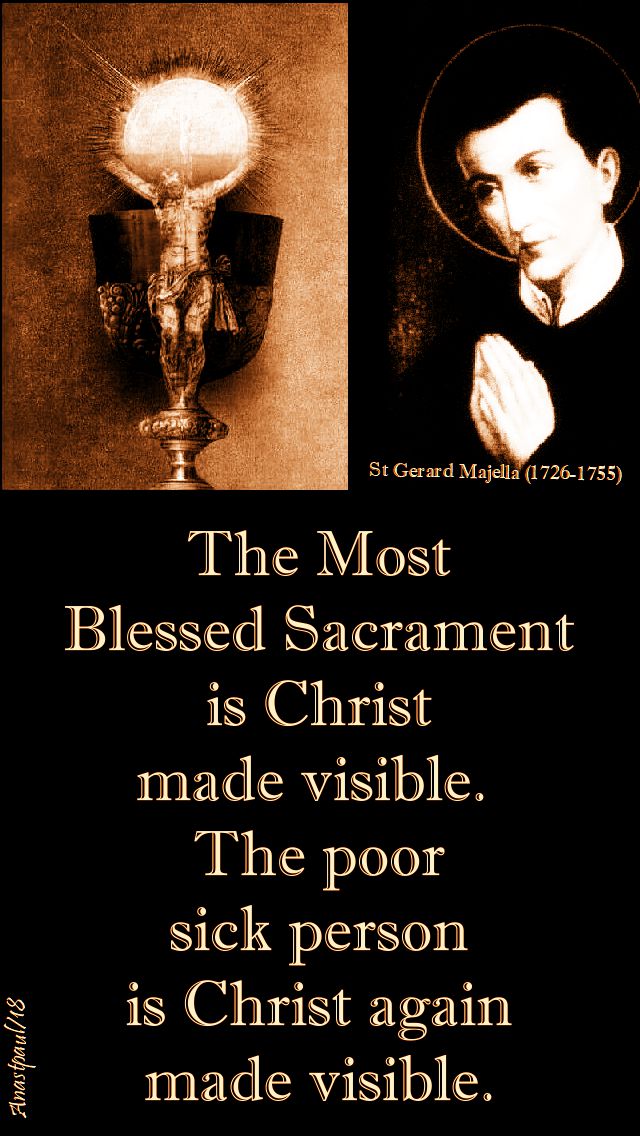 And the Lord said to him, “Now you Pharisees cleanse the outside of the cup and of the dish but inside you are full of extortion and wickedness.”...Luke 11:39

REFLECTION – “Consider the shortness of time, the length of eternity and reflect how everything here below comes to an end and passes by.   Of what use is it to lean upon that which cannot give support?”...St Gerard Majella (1726-1755)

“Let us ask the Lord that we never tire of going down that path, that we never tire of rejecting this religion of appearances, this religion of seeming, of pretending….   We must instead be committed to proceed quietly, doing good and doing so freely, as we have freely received, our interior freedom.   Let us ask for this grace.”…Pope Francis – Santa Marta, 11 October 2016

PRAYER – Lord Jesus Christ, You wondrously revealed all of the deep treasures of Your Heart to Your saints.   May their merits and example win us the grace to love You above all things and in all things so that we may make our abode in Your own Sacred Heart. With You, for You and in You, may we assist and love our neighbour.  Hear the prayers of St Gerard Majella on our behalf dear Lord, we beg.   Who live and reign forever, amen 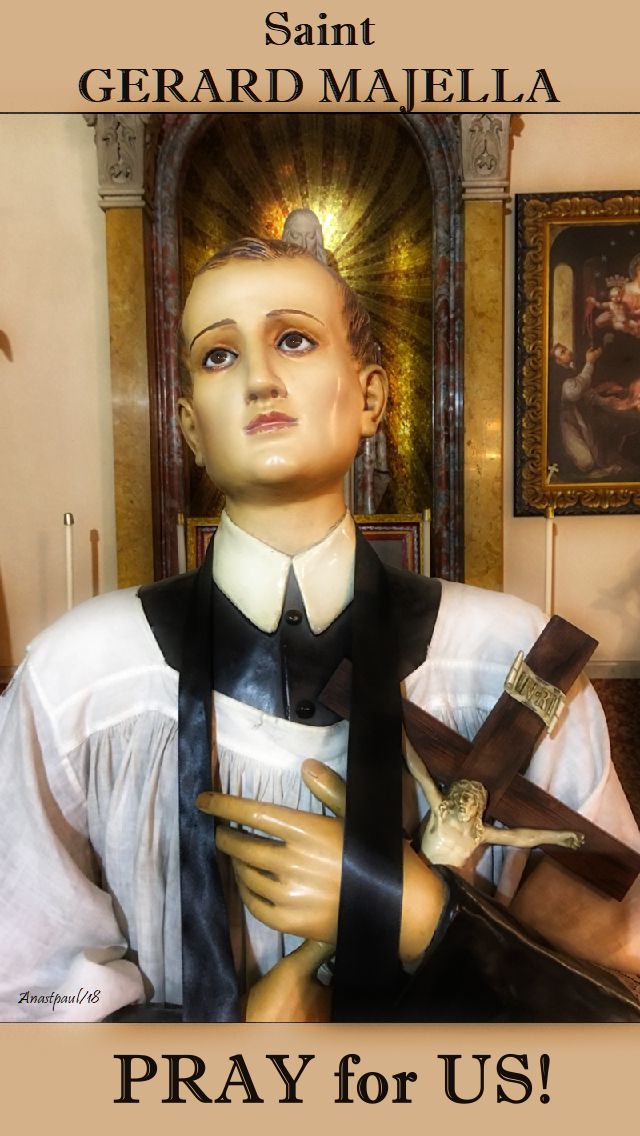 Thanksgiving Prayer for St Gerard
and Request for his Intercession

Almighty and loving Father,
We thank You for giving St Gerard to us
as a most appealing model and powerful friend.
By his example,
he showed us how to love and trust You.
You have showered many blessings
on those who call upon him.
For Your greater glory and my welfare,
please grant the favours
which I ask in his name.
………………………………..
(Mention your needs here…)
And you, my powerful patron,
intercede for me before the throne of God.
Draw near to that throne
and do not leave it until you have been heard.
O good saint,
to you I address my fervent prayers,
graciously accept them
and let me experience in some way
the effects of your powerful intercession.
Through Jesus Christ, with the Holy Spirit,
God forever,
Amen.

Saint of the Day – 16 October – St Gerard Majella C.Ss.R. (1726-1755) Religious Lay Brother of the Congregation of the Redeemer, better known as the Redemptorists, Apostle of the Holy Eucharist, Apostle of Charity, known as a Thaumaturge, a Saint who works miracles not just occasionally but as a matter of course.    Born on 23 April 1725 at Muro, Italy as Gerardo Maiella and died on 16 October 1755 at Caposele, Provincia di Avellino, Campania, Italy of tuberculosis, aged just 29.   Patronages – children (and unborn children in particular); childbirth; mothers (and expectant mothers in particular); motherhood; falsely accused people; good confessions; lay brothers; tennis ball football, head boys and Muro Lucano, Italy.

St Gerard was born in Muro Lucano, Basilicata, the youngest of five children.   He wanted very much to receive Holy Communion at the age of seven and went to the Communion railing one day with the others but the priest, seeing his age, passed him up; and he went back to his place in tears.   The following night, Saint Michael the Archangel brought him the Communion he so much desired.   His tailor father died when Gerard was twelve, leaving the family in poverty.   His mother then sent him to her brother so that he could teach Gerard to sew and follow in his father’s footsteps.   However, the foreman was abusive.   The boy kept silent but his uncle soon found out and the man who taught him resigned from the job.   After four years of apprenticeship, he took a job as a servant to work for the local Bishop of Lacedonia.   Upon the bishop’s death, Gerard returned to his trade, working first as a journeyman and then on his own account.   He divided his earnings between his mother and the poor and in offerings for the souls in Purgatory.

He tried to join the Capuchin Order but his health prevented it.   He had acquired a reputation of sanctity and finally, when he was 23 years old, he obtained the aid of some missionaries to second his request and was admitted as a Coadjutor of the newly founded Congregation of the Most Holy Redeemer, known as Redemptorists, in 1749.  The order was founded in 1732 by Saint Alphonsus Liguori (1696-1787 Doctor of the Church) at Scala, near Naples.   The essentially missionary order is dedicated to “preaching the word of God to the poor.”   Its apostolate is principally in giving of missions and retreats. 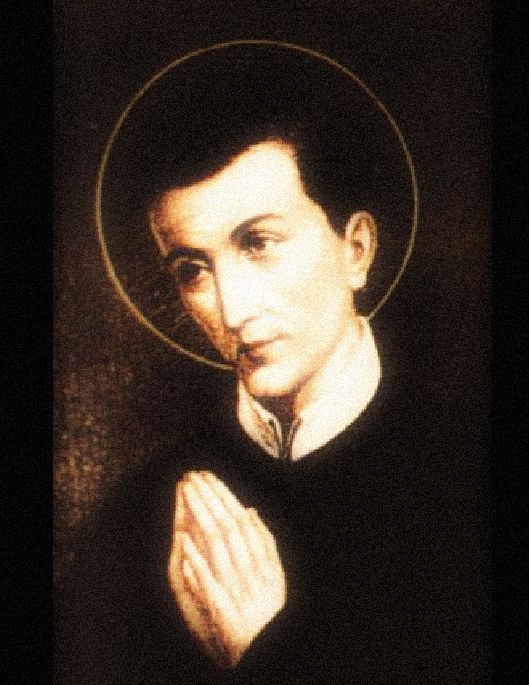 During his life, he was very close to the peasants and other outsiders who lived in the Neapolitan countryside.   In his work with the Redemptorist community, he was variously gardener, sacristan, tailor, porter, cook, carpenter and clerk of works on the new buildings at Caposele.

At 27, the good-looking Majella became the subject of a malicious rumour.   An acquaintance, Neria, accused him of having had relations with a young woman.   When confronted by St Alphonsus Liguori, the founder, on the accusations, the young lay brother remained silent.   The girl later recanted and cleared his name.

Some of Majella’s reported miracles include restoring life to a boy who had fallen from a high cliff, blessing the scanty supply of wheat belonging to a poor family and making it last until the next harvest and several times multiplying the bread that he was distributing to the poor.   One day, he walked across the water to lead a boatload of fishermen through stormy waves to the safety of the shore.   He was reputed to have had the gift of bilocation and the ability to read souls. 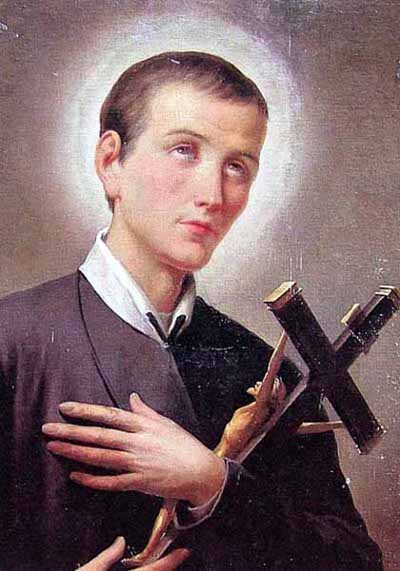 Once he conducted a group of students on a nine-day pilgrimage to Mount Gargano, where the Archangel Michael had appeared.   They had very little money for the tri, and when they arrived at the site, there was none left.   Gerard went before the Tabernacle and told Our Lord that it was His responsibility to take care of the little group.   He had been observed in the church by a religious, who invited the Saint and his companions to lodge in his residence.   When the party was ready to start home again, Gerard prayed once more, and immediately someone appeared and gave him a roll of bills.

His last will was a small note on the door of his cell:   “Here the will of God is done, as God wills and as long as God wills.”   He died at 29 of tuberculosis.

One miracle in particular explains how Majella became known as the special patron of mothers.   A few months before his death, he visited the Pirofalo family and accidentally dropped his handkerchief.    One of the Pirofalo girls spotted the handkerchief moments after he had left the house and she ran after Gerard to return it.  “Keep it,” he said to her. “You may need it some day.”   Years later when the girl, now a married woman, was on the verge of losing her life in childbirth, she remembered the words of the saintly lay brother.   She asked for the handkerchief to be brought to her.   Almost immediately, the pain disappeared and she gave birth to a healthy child.   That was no small feat in an era when only one out of three pregnancies resulted in a live birth and word of the miracle spread quickly.

Because of the miracles that God worked through Gerard’s prayers with mothers, the mothers of Italy took Gerard to their hearts and made him their patron.   At the process of his beatification, one witness testified that he was known as “il santo dei felice parti,” “the saint of happy childbirths.”   It is a well-known patronage and many miracles still occur.    The St Gerard Majella Annual Novena takes place every year in St Josephs Church, Dundalk, Ireland.   This annual nine-day novena is the biggest festival of faith in Ireland.   St Joseph’s sponsors the St Gerard’s Family League, an International Association of Christians united in prayer for their own and other families, to preserve Christian values in their home and family life.   Since his death in 1775, countless favours and miracles have been granted and worked through his intercession. As well as the patron of a good confession, he has been invoked as a constant source of help and inspiration to parents. 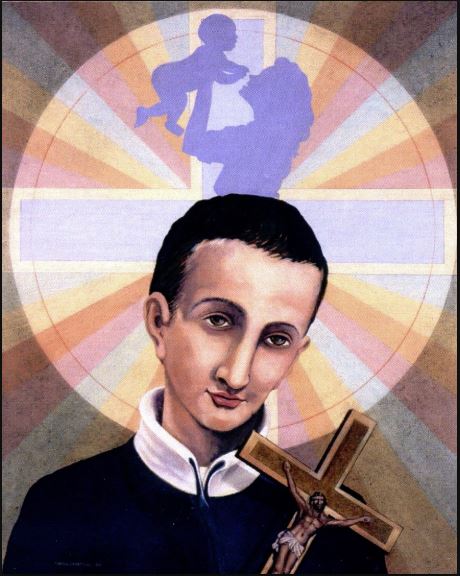 St Gerard was Beatified in Rome on 29 January 1893, by Pope Leo XIII. He was Canonised less than twelve years later on 11 December 1904, by St Pope Pius X.

Martyrs of North Africa – 365 saints: A group of 365 Christians who were martyred together in the persecutions of the Vandal king Genseric. The only details that have survived are the names of two of the martyrs – Nereus and Saturninus. 450 in North Africa.