His name was Francis…

He used to praise God the Artist in every one of God’s works.   Whatever joy he found in things made he referred to their maker.   He rejoiced in all the works of God’s hands. Everything cried out to him, “He who made us is infinitely good!’

He called animals “brother” or “sister” and he exhorted them to praise God.   He would go through the streets, inviting everyone to sing with hi  m. And one time when he came upon an almond tree, he said, ‘Brother Almond, speak to me of God.”   And the almond tree blossomed.

That is what Saint Francis of Assisi did and that is what he does for us once we are caught up in his life and teachings.  He makes us blossom, wherever and whoever we are.   We blossom because we see in Francis what could happen to us if we were to embrace the overflowing goodness of God revealed in everything that exists and let that embrace change us.…Murray Bodo, OFM

St Francis of Assisi, Pray for us!

Dear friends, Francis was a great Saint and a joyful man.   His simplicity, his humility, his faith, his love for Christ, his goodness towards every man and every woman, brought him gladness in every circumstance.   Indeed, there subsists an intimate and indissoluble relationship between holiness and joy.   A French writer once wrote that there is only one sorrow in the world – not to be saints, that is, not to be near to God.   Looking at the testimony of St Francis, we understand that this is the secret of true happiness: -to become saints, close to God!

May the Virgin, so tenderly loved by Francis, obtain this gift for us.   Let us entrust ourselves to her with the words of the Poverello of Assisi himself:

“Blessed Virgin Mary, no one like you among women has ever been born in the world, daughter and handmaid of the Most High King and heavenly Father, Mother of our Most Blessed Lord Jesus Christ, spouse of the Holy Spirit.

Pray for us… to your most blessed and beloved Son, Lord and Master” 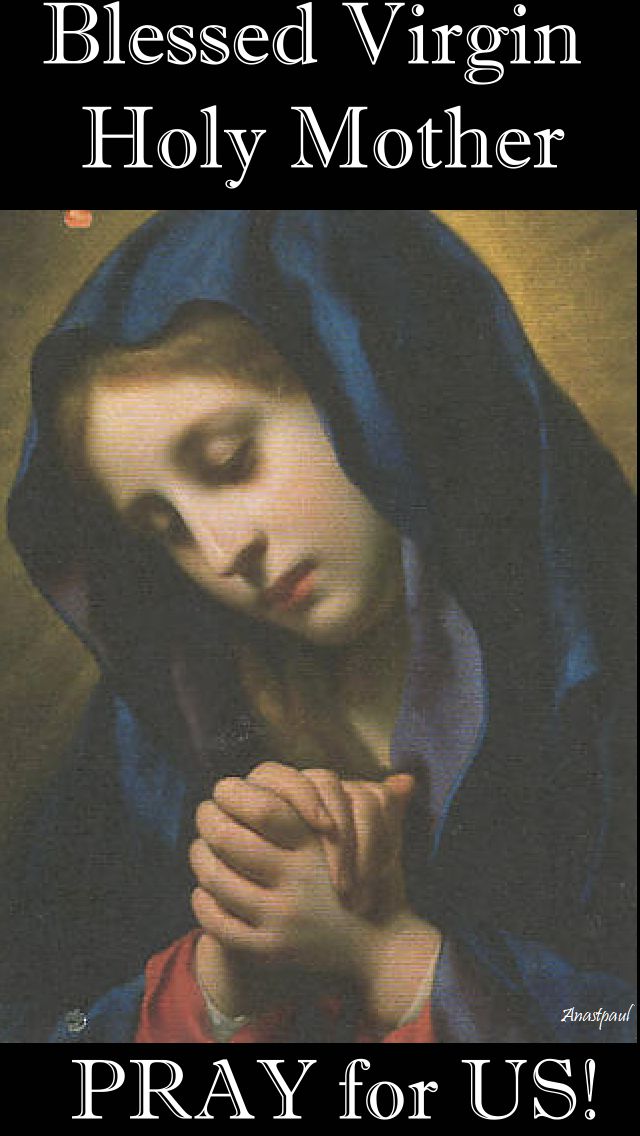 St Francis of Assisi, Pray for us! 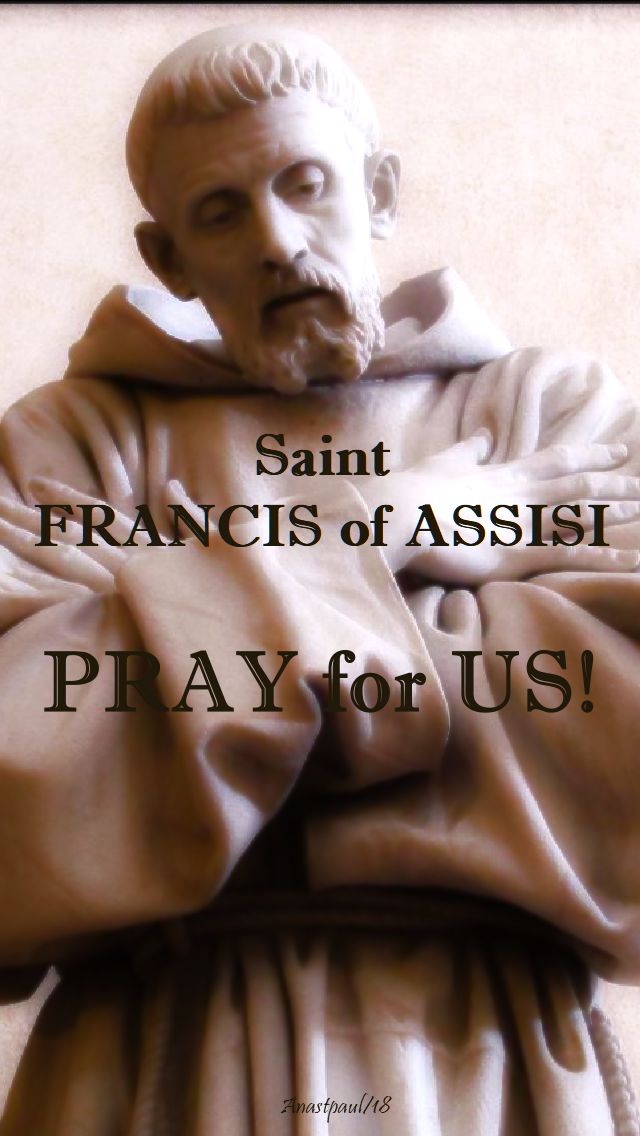 St Francis leaves us with his blessing:

“The one you are looking for,
is the One who is looking.”

“Let the whole world of mankind tremble,
the whole world shake
and the heavens exult when Christ,
the Son of the living God,
is on the altar in the hands of a priest.
O admirable heights and sublime lowliness!
O sublime humility! O humble sublimity!
That the Lord of the universe, God and the Son of God,
so humbles Himself that for our salvation,
He hides Himself under the little form of bread!
Look, brothers, at the humility of God
and pour out your hearts before Him!
Humble yourselves, as well,
that you may be exalted by Him.
Therefore, hold back nothing
of yourselves, for yourselves,
so that He,
Who gives Himself totally to you,
may receive you totally.”

“Jesus is happy to come with us,
as Truth is happy to be spoken,
as Life to be lived,
as Light to be lit,
as Love is to be loved,
as Joy to be given,
as Peace to be spread.”

“The deeds you do may be the only sermon
some persons will hear today.”

REFLECTION – “Three times Christ on the Cross came to life and told him:  “Go, Francis, and repair my Church in ruins”.   This simple occurrence of the word of God heard in the Church of St Damian, contains a profound symbolism.   At that moment, St Francis was called to repair the small church but the ruinous state of the building, was a symbol of the dramatic and disquieting situation of the Church herself…. it is important to note that St Francis does not renew the Church without, or in opposition, to the Pope but only in communion with him.   Authentic renewal grew from these together….
Francis, standing before the Bishop of Assisi, in a symbolic gesture, stripped off his clothes, thus showing he renounced his paternal inheritance.   Just as at the moment of creation, Francis had nothing, only the life that God gave him, into whose hands he delivered himself….
The truth is that St Francis really did have an extremely intimate relationship with Jesus and with the word of God, that he wanted to pursue sine glossa – just as it is, in all its radicality and truth.   It is also true, that initially he did not intend to create an Order with the necessary canonical forms.   Rather he simply wanted, through the word of God and the presence of the Lord, to renew the People of God, to call them back to listening to the word and to literal obedience to Christ.”…Pope Benedict XVI – Catechesis on St Francis – General Audience, 27 January 2010

“Remember that when you leave this earth, you can take with you nothing that you have received—only what you have given: a full heart, enriched by honest service, love, sacrifice and courage.”….St Francis of Assisi

PRAYER – Lord God, You made St Francis of Assisi, Christ-like in his poverty and humility, his gentleness and charity, his love and courage.   Help us to walk in his ways that, with joy and love, we may follow Christ Your Son and be united with You.   May the intercession of St Francis, be an assistance on our journey.   Through Christ our Lord, with the Holy Spirit, one God forever, amen.

Prayer of Self-Giving
By St Francis of Assisi

Saint of the Day – 4 October – St Francis of Assisi OFM (1181/2–1226) – born Giovanni di Pietro di Bernardone, informally named as Francesco (1181/1182 – 3 October 1226), was an Italian Friar, Deacon, the First known Stigmatist, Founder, Mystic, Apostle of the Holy Eucharist, of the Blessed Virgin, of Charity, Confessor, Missionary, Writer, Poet, Miracle-Worker, Preacher.   He founded the men’s Order of Friars Minor, the women’s Order of Saint Clare, the Third Order of Saint Francis and the Custody of the Holy Land.   Francis is one of the most venerated religious figures in history.

Francis of Assisi was a poor little man who astounded and inspired the Church by taking the gospel literally—not in a narrow fundamentalist sense but by actually following all that Jesus said and did, joyfully, without limit and without a sense of self-importance.

Serious illness brought the young Francis to see the emptiness of his frolicking life as leader of Assisi’s youth.   Prayer—lengthy and difficult—led him to a self-emptying like that of Christ, climaxed by embracing a leper he met on the road.   It symbolised his complete obedience to what he had heard in prayer:   “Francis! Everything you have loved and desired in the flesh it is your duty to despise and hate, if you wish to know my will.   And when you have begun this, all that now seems sweet and lovely to you will become intolerable and bitter but all that you used to avoid will turn itself to great sweetness and exceeding joy.”

From the cross in the neglected field-chapel of San Damiano, Christ told him, “Francis, go out and build up my house, for it is nearly falling down.”   Francis became the totally poor and humble workman.

He must have suspected a deeper meaning to “build up my house.”   But he would have been content to be for the rest of his life the poor “nothing” man actually putting brick on brick in abandoned chapels.   He gave up all his possessions, piling even his clothes before his earthly father—who was demanding restitution for Francis’ “gifts” to the poor—so that he would be totally free to say, “Our Father in heaven.”   He was, for a time, considered to be a religious fanatic, begging from door to door when he could not get money for his work, evoking sadness or disgust to the hearts of his former friends, ridicule from the unthinking.

But genuineness will tell.   A few people began to realise that this man was actually trying to be Christian.   He really believed what Jesus said : “Announce the kingdom! Possess no gold or silver or copper in your purses, no travelling bag, no sandals, no staff” (Luke 9:1-3).

Francis’ first rule for his followers was a collection of texts from the Gospels.   He had no intention of founding an order but once it began he protected it and accepted all the legal structures needed to support it.   His devotion and loyalty to the Church were absolute and highly exemplary at a time when various movements of reform tended to break the Church’s unity.

Francis was torn between a life devoted entirely to prayer and a life of active preaching of the Good News.   He decided in favour of the latter but always returned to solitude when he could.   He wanted to be a missionary in Syria or in Africa but was prevented by shipwreck and illness in both cases.   He did try to convert the sultan of Egypt during the Fifth Crusade.

During the last years of his relatively short life, he died at 44, Francis was half blind and seriously ill.   Two years before his death he received the stigmata, the real and painful wounds of Christ in his hands, feet and side. 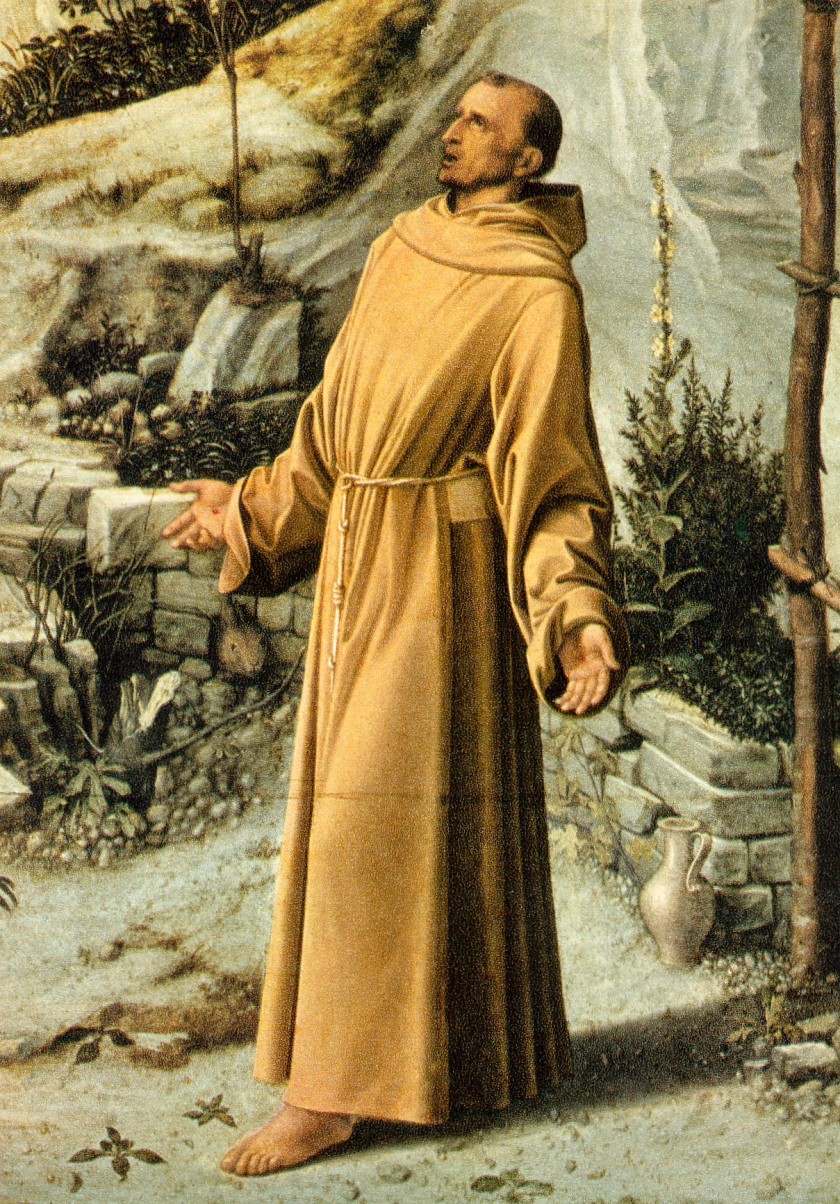 On his deathbed, Francis said over and over again the last addition to his Canticle of the Sun, “Be praised, O Lord, for our Sister Death.”   He sang Psalm 141, and at the end asked his superior’s permission to have his clothes removed when the last hour came in order that he could expire lying naked on the earth, in imitation of his Lord. (via Franciscan media)

St Adauctus of Ephesus
Bl Alfonso Tabela
St Ammon the Great
St Aurea
Berenice
St Caius of Corinth
St Callisthene of Ephesus
St Crispus of Corinth
St Damaris of Athens
St Diogenes of Milan
St Domnina
St Hierotheus
Bl Julian Majali
St Lucius of Alexandria
St Peter of Damascus
St Petronius of Bologna
St Prosdoce
St Quintius of Tours
—
Martyrs of Alexandria – 2+ saints: A group of Christians, men and women, young and old, murdered together for their faith. The only names that have come down to us are the brothers Mark and Marcian.