How Ethelwald, successor to Cuthbert, leading a hermit’s life, calmed a tempest by his prayers when the brethren were in danger at sea. [687-699]
The venerable Ethewald succeeded the man of God, Cuthbert, in the exercise of a solitary life, which he spent in the isle of Fame before he became a bishop.   After he had received the priesthood, he consecrated his office by deeds worthy of that degree for many years in the monastery which is called Inhrypum.

To the end that his merit and manner of life may be the more certainly made known, I will relate one miracle of his, which was told me by one of the brothers for and on whom the same was wrought; to wit, Guthfrid, the venerable servant and priest of Christ, who also, afterwards, as abbot, presided over the brethren of the same church of Lindisfarne, in which he was educated.

“I came,” says he, “to the island of Fame, with two others of the brethren, desiring to speak with the most reverend father, Ethelwald.   Having been refreshed with his discourse and asked for his blessing, as we were returning home, behold on a sudden, when we were in the midst of the sea, the fair weather in which we were sailing, was broken and there arose so great and terrible a tempest, that neither sails nor oars were of any use to us, nor had we anything to expect but death.   After long struggling with the wind and waves to no effect, at last we looked back to see whether it was possible by any means at least to return to the island whence we came but we found that we were on all sides alike cut off by the storm, and that there was no hope of escape by our own efforts. But looking further, we perceived, on the island of Fame, our father Ethelwald, beloved of God, come out of his retreat to watch our course, for, hearing the noise of the tempest and raging sea, he had come forth to see what would become of us.   When he beheld us in distress and despair, he bowed his knees to the Father of our Lord Jesus Christ, in prayer for our life and safety and, as he finished his prayer, he calmed the swelling water, in such sort that the fierceness of the storm ceased on all sides and fair winds attended us over a smooth sea to the very shore.   When we had landed and had pulled up our small vessel from the waves, the storm, which had ceased a short time for our sake, presently returned and raged furiously during the whole day, so that it plainly appeared, that the brief interval of calm had been granted by Heaven, in answer to the prayers of the man of God, to the end that we might escape.”

The man of God remained in the isle of Fame twelve years,and died there but was buried in the church of the blessed Apostle Peter, in the isle of Lindisfarne, beside the bodies of the aforesaid bishops.’

These things happened in the days of King Aldfrid, who, after his brother Egfrid, ruled the nation of the Northumbrians for nineteen years.

We beseech Thee, Lord,
open Thy heavens, open our eyes,
may Thy gifts descend to us,
may our hearts look back to Thee.
May Thy throne be laid open to us,
while we receive the benefits which we implore,
may our mind be laid open to Thee,
while we render the service which is enjoined to us.
Look down from Heaven, O Lord,
behold and visit this vine
which Thy right hand hath planted.
Strengthen the weak,
relieve the contrite,
confirm the strong.
Build them up in love,
cleanse them with purity,
enlighten them with wisdom,
keep them with mercy.
Lord Jesus, Good Shepherd,
who laid down Thy life for the sheep,
defend the purchase of Thy blood.
Feed the hungry, give drink to the thirsty,
seek for the lost, convert the wandering,
bind up that which is broken.
Put forth Thine own hand from Heaven
and touch the head of each one here.
May they feel the touch of Thy hand
and receive the joy of the Holy Spirit,
that they may remain blessed for evermore.
Amen 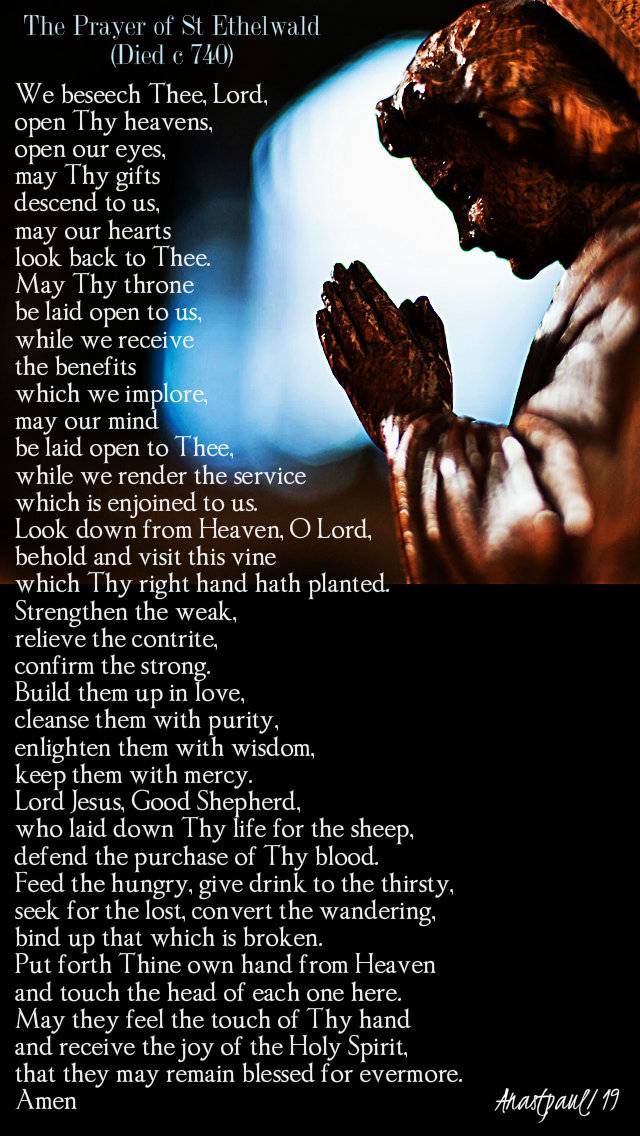 When we pray,
let it be our whole being
that turns towards God –
our thoughts,
our heart…
The Lord will be moved
to incline towards us
and come to our help…