Thought for the Day – 23 February – A rich and pleasing sacrifice – Memorial of Saint Polycarp of Smyrna, Apostolic Father, Bishop and Martyr

When the pyre was ready, Polycarp took off all his clothes and loosened his under-garment.   He made an effort also to remove his shoes, though he had been unaccustomed to this, for the faithful always vied with each other in their haste to touch his body.   Even before his martyrdom he had received every mark of honour in tribute to his holiness of life.

There and then, he was surrounded by the material for the pyre.   When they tried to fasten him also with nails, he said:  “Leave me as I am.   The one who gives me strength to endure the fire will also give me strength to stay quite still on the pyre, even without the precaution of your nails.”   So they did not fix him to the pyre with nails but only fastened him instead.   Bound as he was, with hands behind his back, he stood like a mighty ram, chosen out for sacrifice from a great flock, a worthy victim made ready to be offered to God.

Looking up to heaven, he said:  “Lord, almighty God, Father of Your beloved and blessed Son Jesus Christ, through whom we have come to the knowledge of Yourself, God of angels, of powers, of all creation, of all the race of saints who live in Your sight, I bless You for judging me worthy of this day, this hour, so that in the company of the martyrs I may share the cup of Christ, Your anointed one and so rise again to eternal life in soul and body, immortal through the power of the Holy Spirit.   May I be received among the martyrs in Your presence today as a rich and pleasing sacrifice.   God of truth, stranger to falsehood, You have prepared this and revealed it to me and now You have fulfilled Your promise.   I praise You for all things, I bless You, I glorify you through the eternal priest of heaven, Jesus Christ, Your beloved Son.   Through Him be glory to You, together with Him and the Holy Spirit, now and for ever. Amen.” 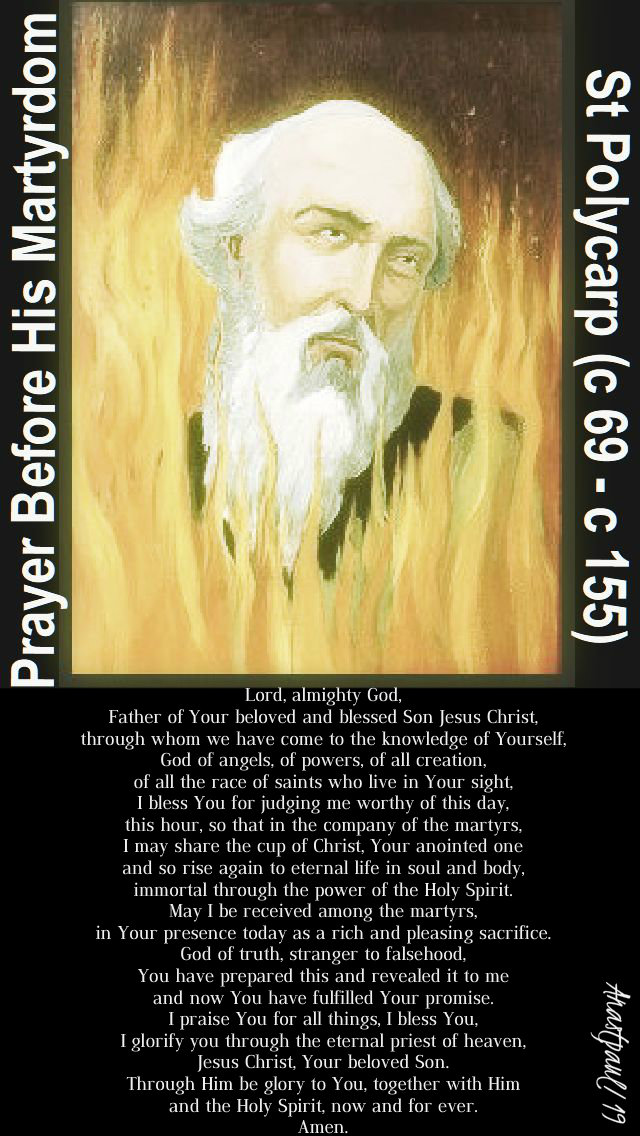 When he had said “Amen” and finished the prayer, the officials at the pyre lit it.   But, when a great flame burst out, those of us privileged to see it witnessed a strange and wonderful thing.   Indeed, we have been spared in order to tell the story to others.   Like a ship’s sail swelling in the wind, the flame became as it were a dome encircling the martyr’s body.   Surrounded by the fire, his body was like bread that is baked, or gold and silver white-hot in a furnace, not like flesh that has been burnt.   So sweet a fragrance came to us that it was like that of burning incense or some other costly and sweet-smelling gum.

The fire was lighted but it did him no hurt, so he was stabbed to the heart and his dead body was burnt.   “Then,” say the writers of his acts, “we took up the bones, more precious than the richest jewels or gold and deposited them in a fitting place, at which may God grant us to assemble with joy to celebrate the birthday of the martyr to his life in heaven!”

St Polycarp was a Christian leader in a pagan world. He spoke clearly and simply, fearless in love and defense of Christ, even though persecutions raged around him. He sought only to hand on the message he had been given by John. Even as Polycarp prepared for martyrdom, his joy and confident trust were evident to all.

The community of believers celebrated the anniversary of Polycarp’s death with great joy, for in him they had seen an outstanding example of love and patience.   He had held strong and had won the treasure of eternal life.   Polycarp is remembered as an Apostolic Father, one who was a disciple of the apostles.