Saint of the Day – 5 August – Blessed Salvio Huix-Miralpeix CO Cong. Orat. (1877–1936) Bishop of Ibiza and later of Lleida, Catalonia and Martyr, Religious of the Congration of the Oratory of St Philip Neri, Professor of Theology, Apostle of the sick – born on 22 December 1877 in Santa Margarida de Vallors, Girona, Spain and died by being shot in the head on the morning of 5 August 1936 in a cemetery in Lleida, Spain.

Salvio Huix was born on 22 December 1877.   His family, were fairly well-off and were more than ordinarily devout Catholics — daily Mass, Rosary, Visits to the Blessed Sacrament were built into the life of the family.   There were always Priests visiting the home and there were quite a few Priests in the family, so it came as no real surprise, when young Salvio announced his intention to offer himself as a candidate for the Priesthood, leaving home for the local minor seminary at the age of 10.   There, he excelled at his studies, not on account of any unusual intelligence but because of his tremendous application to his work.   It was said by those who knew him that he would always do whatever was needed as well as he possibly could and, that he was an immensely practical sort of person, not given to day dreams or idling. The virtues noticed by his fellow students were to be those admired by his fellow Oratorians – his obedience, his joy and warm heartedness, his natural interest in others, his capacity for hard work and real leadership, while at the same time, shying away from any publicity.   It must be said that this young man was also hot tempered and at times had difficulty in controlling his temper.

Salvio was Ordained Priest on 19th September 1903 and was sent to work as a country curate.   He served in two rural Parishes but found there wasn’t work enough to absorb his energies;  moreover, he wanted to be near people and to be active in the business of helping people become holy.   It was this desire that lead him to enter the Oratory in Vich in 1907.   He was then 30 years old.

What was life at the Oratory of Vich like?   The fathers would rise each morning at 4:30am, except on Sunday and feast-days, when they would get up half an hour earlier.   After an hour of mental prayer, they would go down to the Church to hear Confessions and after the last penitent was done, the fathers would say their Masses at one of the side-altars in the church.   The afternoon was spent in the confessional, or working with one of the groups or sodalities which were attached to the church -Brothers of the Little Oratory, groups for young people etc. There were the sick to be visited and children to be catechised.   Fr Huix became aware that there was nothing for young married men, who seemed to have no part in the life of the Church.   Bl Salvio believed that a religion that attracted only women and children in large numbers was seriously deficient, so he started a confraternity for married men under the patronage of St Joseph.   Both these men and the young ,he encouraged in the apostolate.   He was anxious to get them working for the sick, not just by visiting them but by actually looking to their physical and material needs.   He himself was unafraid to get his hands dirty and when he wasn’t busy in the Confessional or at the Seminary, where he was Professor of Mystical and Ascetical Theology, he was likely to be found tending the sick — washing them if needs be and changing their bed-linen.

In 1927, Fr Salvio, by now provost of the little community, was nominated Bishop of Ibiza.   The island had been without a Bishop for 69 years and so his appointment was greeted with great joy.   A photograph of his arrival shows the quay crowded with hundreds of cheering people.   Even though his Episcopal Consecration (which took place 28 April that year) meant that Fr Huix would have to leave his Congregation, he remained very much a son of St Philip, even in the way he governed his Diocese.   As Bishop he showed himself to be a very caring shepherd and very practical one too.   Another photograph taken at a reception soon after his appointment as Bishop, shows him, his head inclined towards the person he is talking to, holding his hand, evidently interested in what he is saying.   His clergy, he found, were extremely poor and so he organised a life insurance scheme which would guarantee them some security in their old age.   He continued to encourage the laity in the social apostolate.   He was very much a man for his people.

In 1931, Spain was declared a Republic and although the Spanish Bishops initially urged the faithful to co-operate with the Government, within a few weeks, things began to change and as the new order made itself felt.   In Madrid and elsewhere, convents were pillaged and burned;  the Jesuits were suppressed;  the Archbishop of Toledo was expelled;  all schools run by religious orders were closed.   Cemeteries were secularised and Catholic burials were forbidden.   All Crucifixes were ordered to be removed from the cemeteries.   On Ibiza, men carried the great Crucifix from the cemetery to the Cathedral doors, where the Bishop himself shouldered the Crucifix and carried it to the sanctuary.   Bl Salvio was unimpressed by the anti-religious laws and ideas and in his Lenten pastoral letter of 1932, he told his people that even though the dogs bark and the pigs grunt, the sun and the moon will continue to shine.

He remained Bishop of Ibiza for 8 years, when in 1935, he was translated to the more prestigious see of Lerida on the mainland.  There he hoped to continue his pastoral programme but this was not to be, because within the year, the civil war broke out.

Between July 1936 and March 1937, there was an onslaught of violence against the Church, a few months in which thousands of people died. By the end of the war, it was reckoned that 6,832 priests and religious had been killed, 12 bishops and 283 religious sisters.

On 18 July there was a military uprising against the Republican government.   Two days later, the city of Lerida was in the hands of republican forces, who burned the Cathedral and the Churches of the city, killing, in the course of several months, 80% of the Priests of the Diocese.   The last photograph of Mgr Huix, taken in June of 1936, shows him flanked by the Priests he had just Ordained;  within a month, all but one of those young men, together with their Bishop, were dead.   One of his seminarians, aged about 15 was given a mock trial.   The crowd shouted for his death and the ‘Judge’, so called, went through the motion of washing his hands, before condemning him to death.   The boy was then beaten, stripped and nailed to a beam where he died.

On the night of the 21st July, after republicans had burned the Cathedral, they turned their attention to the Episcopal residence. Whilst they were beating down the doors, Huix, together with his Secretary, the porter and his daughter, confessed, consumed the Blessed Sacrament and escaped by the back door.   He had, it seems, expected something of the sort to happen, since he kept a suitcase with a simple suit packed ready, just in case.   At first, he took refuge in the house of the gardener but realising the danger to which he was exposing this man and his family, he gave himself up to the police.   ‘I am the Bishop of Lerida,’ he said, ‘and I place myself under your protection.’   The police promptly handed him over to the republicans, who imprisoned him.   Many of the leading people of the city were already in gaol, also a number of his clergy.   All were struck by the Bishop’s cheerfulness and his continuing care for his flock.   On St James’ feast, he was able to say Mass, using vessels that had been smuggled in to the prison.   He administered Communion and heard Confessions.

Early in the morning (4:30am) on the 5th August, the feast of Our Lady of the Snows, the Bishop and 20 others were told that were going to be taken for trial at Barcelona.   Once outside the city, the lorries stopped by the cemetery and the prisoners were instructed to get out.  Realising they were about to be killed, the group all asked their Bishop for his blessing.   This he gave, telling them, ‘Be brave, for within the hour we shall be reunited in the presence of the Lord.’   He is said to have used a popular Catalan saying on reaching the end of a long journey:  Ja soms a sants (We are saints).   They then recited the Credo together and were made to dig their graves. 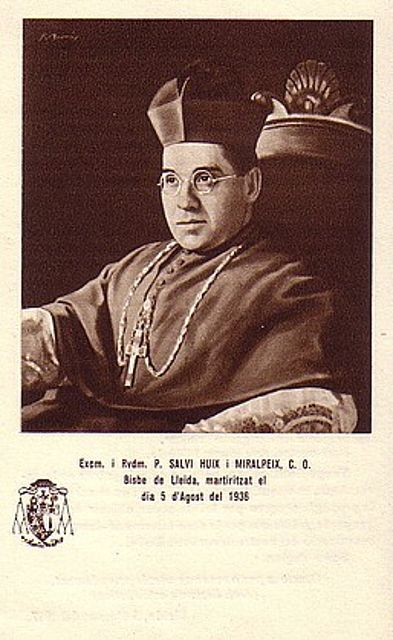 One account tells that Mgr Huix was offered his life if he would abjure his faith.   This he refused to do but asked one favour, that he might be the last to die.   As each was killed, he blessed them.   One of the militia men, objecting to this, shot him through the hand, he continued to bless with his left   In a written testimony after the Martyrdom, the man who had administered the coup de grace to the dying, said how there was much blood and that the sinews of the Bishop’s arms were exposed through having been shot a number of times.

Blessed Salvio was not the only father of the Oratory to lose his life in the tragic events of the Civil War.   Four fathers from Barcelona were murdered, five from Gracia and the Provost of Vich.    May their blood and that of all the Martyrs, be the seed of a new spring in the life of the Church in his country and their intercession, the means of a true reconciliation and understanding.   I have perhaps spoken at too great a length about Blessed Salvio , when it might well have sufficed to quote St Ambrose:  ‘I have called him Martyr. I have said everything.’

Blessed Salvio was Beatified on 13 October 2013 by Pope Francis in Tarragona, Spain along with another 521 martyrs.  His liturgical feast is kept today, 5 August.

Almighty and eternal God, who in your goodness bestowed on the Bishop and Martyr Salvio Huix, the gift of pastoral charity even to the point of shedding of his blood for Christ and His Church, bestow on us also, the grace to work faithfully in your vineyard and to experience his intercession in this life.   Through Christ our Lord.   Amen