REFLECTION – “We should not be ashamed of the cross of the Saviour but rather make it our glory.
“The message of the cross is a stumbling block to Jews and foolishness to Gentiles” but for us it is salvation.   For those who are perishing it is foolishness but for us who are being saved it is the power of God” (cf. 1 Cor 1:18-24).
For it is no mere man who died but the Son of God, God made man.
In Moses’ days the lamb caused the destroying angel to pass over (cf. Ex 12:23) and has not “the Lamb of God who takes away the sin of the world” (Jn 1:29) set us even more free from our sins?

Not by force did He lose His life, not by might was He sacrificed but by His own will.
Hear what he said: “I have power to lay down my life and I have power to take it up again” (Jn 10:18). (…)
He came to His Passion of set will, happy in His exploit, laughing at His victory, satisfied to be saving us.
He was not ashamed of the cross because He was saving the whole earth.   It was not some poor man who was suffering but God made man who entered the combat to win the prize of patience. (…)

Do not rejoice in the cross only in times of peace, preserve the same faith in times of persecution.
Do not be a friend to Jesus in times of peace alone, only to become His enemy in times of war.
You are now receiving forgiveness for your sins and the spiritual gifts lavishly bestowed by your king so, when war breaks out, fight valiantly for your king.
Jesus has been crucified for you, He who was without sin. (…)
It is not you who bestowed this grace on Him, for you first of all received it.
But you offer thanks to Him who paid the price by being crucified for you on Golgotha.” … St Cyril of Jerusalem (315-387)) – Father and Doctor of the Church – Baptismal catecheses nos. 13, 3.6.23

PRAYER – Lord of heaven and earth, by Your grace You have brought our hearts and mind to seek and hope in Your saving love, in Your only Son, our Lord Jesus Christ.   May we, who like Peter, our father in faith, declare, ‘You are the Christ!’, remain ever in His steps, carrying the cross behind Him.   We thank You for the blessing of St Eucherius of Orléans, grant that, through his intercession, we may, like him, constantly follow the Light of Christ and so rise to eternal life.   We make our prayer through our Lord Jesus, in unity with the Holy Spirit, one God forever, amen 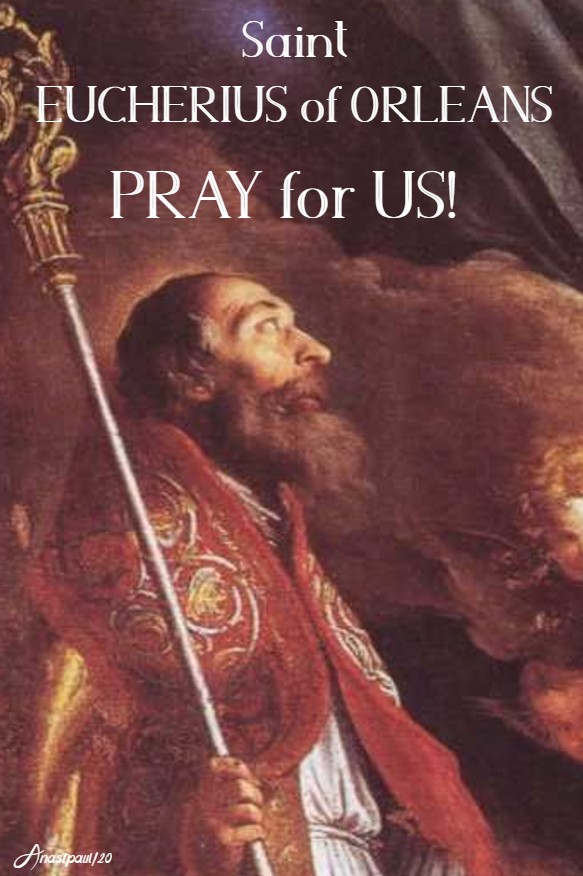 Saint of the Day – 20 February – Saint Eucherius of Orléans (c 687-743) Bishop Orléans, Benedictine Monk, Confessor – born at Orleans, France and died on 20 February 743 at the monastery of Sint-Tuiden in Belgium of natural causes.

St Eucherius was born in Orleans, France.   He was very pious in his youth as he received a Christian upbringing and he was also highly educated.

A sentence from Paul’s first letter to the Corinthians made a big impression on him – “This world as we see it is passing away” (1 Corinthians 7:31).   It made Eucherius realise that our lives on this earth are very short and that heaven and hell last forever.   He decided to seek the joys of heaven by living for God alone.

In 714, St Eucherius left his rich home and entered a Benedictine abbey as a monk.  There, he spent seven years in close union with God.   After the death of his uncle, the bishop of Orleans, the people asked for Eucherius to take his place.

Eucherius was then only twenty-five and he was very humble.   He did not want to leave his beloved abbey.   With tears, he begged to be allowed to remain alone with God in the monastery.   But finally, he gave in for love of obedience.   Eucherius became a holy, wise bishop and did much good to his priests and people.

A powerful man Charles Martel sold some of the Church’s property to support his wars. Because Bishop Eucherius told him that was wrong, when Charles won the war, he had Eucherius taken prisoner.

He was sent away to Cologne in Germany.   The people there greeted him with joy and he was given the job of distributing the governor’s alms.   Later he was transferred to a fort near Liege.

But the governor in whose charge Martel had placed the Bishop was touched by Eucherius’ meekness toward his enemies.   Some time later, the governor quietly released the bishop from prison and sent him to a monastery.   Here, the saint spent all his time peacefully in prayer until his death in 743.

Archbishop Hincmar of Reims reported to a Council of Quierzy in 858, a vision that Bishop Eucherius of Orléans had seen during the reign of King Pepin III over a century before.   While at prayer, Eucherius had been taken up and shown, among other things, the sufferings of those in hell, among whom he saw Charles Martel.   When the vision ended, he called St Boniface and Fulrad, Abbot of Saint-Denis and sent to them to see whether Charles was in his tomb.   When the two opened the tomb a dragon rushed out and they found the tomb’s interior blackened as though burned.   These two signs were taken as evidence that the vision had been accurate and that Charles had been condemned to hell for his despoliation of Church property.