Most Holy Name of Mary (Optional Memorial):   Feast of the entire Latin Church.   It was first observed at Cuenca, Spain in 1513, then extended to the universal Church and assigned to its present place and rank by Pope Innocent XI in 1683 in thanksgiving to God and the Blessed Virgin for the liberation of Vienna, France and the signal victory over the Turks on 12 September 1683.   It is the titular feast of the Society of Mary (Marianists) and of the Congregation of the Oblates of Mary Immaculate. 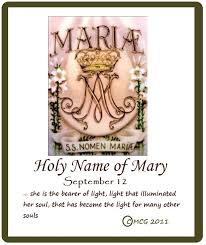 Martyrs of Phrygia – 3 saints: Three Christians who were martyred for destroying pagan idols. We know little more than their names – Macedonius, Tatian and Theodolus. They were burned to death in 362 in Phrygia (modern Turkey).