Saint Januarius, according to legend, was born in Benevento to a rich patrician family  At a young age of 15—based upon his piety and faithfulness– he became local priest of his parish in Benevento, which at the time was relatively pagan.   When Januarius was 20, he became was elevated to Bishop of Naples.   At the onset of the persecution of Christians by Emperors Diocletian and Maximian, he worked tirelessly to hide and protect his fellow Christians, succeeding for approximately 1 ½ years. 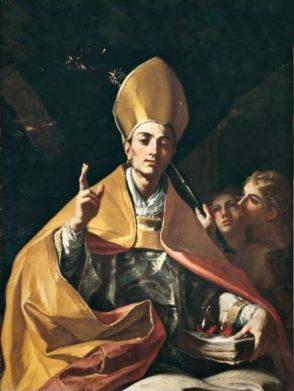 However, he was eventually arrested, taken to Nola and brought before Timotheus, governor of Campania, on account of his profession of the Christian religion.   Upon refusing to recant his faith, and his constant assertion of the truth of the Gospel, Januarius and his companions were sentenced to be cast into the fiery furnace.   The flames, however, caused him no harm and the following day, he was led into the coliseum to be mauled by wild animals.  The beasts, however, laid themselves down in tame submission at his feet.

Governor Timotheus, enraged and again pronouncing sentence of death, was struck with blindness at his sentencing but Januarius healed him—a miracle which led to the miraculous conversion of 5,000 present.   The ungrateful judge, further inflamed with anger, ordered the saintly bishop beheaded, which occurred immediately.   St Januarius’ body was removed by faithful Christians, placed in the Cathedral of Naples and is said to have miraculously protected Naples from both the plague and the dangerous eruptions of nearby Mount Vesuvius. 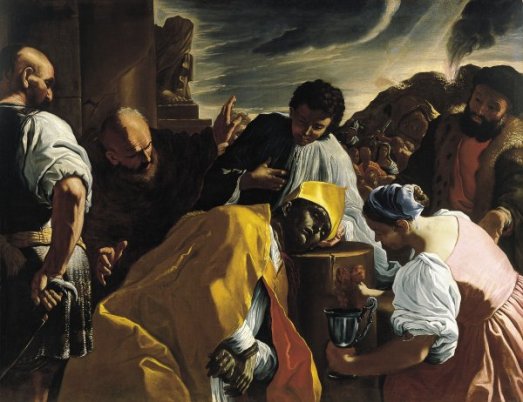 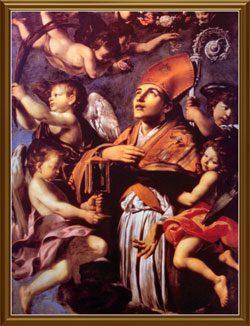 You can read the full story here:  https://sourcebooks.fordham.edu/basis/januarius.asp – ACTS OF THE HIEROMARTYR JANUARIUS, BISHOP OF BENEVENTO

The liquefaction (becoming liquid) of the blood of St Januarius is an extraordinary miracle of the Church that has been occurring up to 18 times each year for the past 600 years.  It is only one of a number of blood miracles that have taken place and in the case of St Januarius and others, are still taking place with blood that was collected soon after the death of certain martyrs.   There is a well-documented history of these samples of blood liquefying at various times of the year, especially on the Saints’ feast days.

This practice of gathering blood for relics, admittedly a somewhat surprising religious practice, nevertheless was a common practice beginning in the days of persecution when the early Christians soaked cloths in the blood shed by martyrs or, if possible, actually collected the liquid in flasks to keep as devotional items.   In the catacombs these flasks were buried with the dead, their discovery indicating that the person had died a martyr. Throughout the centuries, blood has been collected from holy persons recently deceased, especially martyrs for the faith, with the specimens being carefully kept with devotion and veneration.   These samples have been known to liquefy under various circumstances, at different seasons of the year, in various countries and in varied ways. Many samples still display wonderful reactions in our day, one of which, that of St Januarius we will here consider.

While it is scientifically known that blood once removed from the body soon coagulates and eventually spoils and since this natural reaction was common knowledge among the medical faculty of the Middle Ages, a claim made by them of remarkable liquefaction can hardly be ignored and would seem to indicate a transcendence of their experience.   And in our own day, the specimens that are still active are no less scientifically inexplicable than they were centuries ago, even amidst intense scientific investigation.

The best known and most intensely studied is the yearly blood miracle of St Januarius that occurs is Naples each year.  The recurring miracle of the liquefaction of his blood 18 times a year is often reported in the secular as well as the religious press and is the occasion of great gatherings in the Cathedral of Naples.   Here the people pray fervently while the resident cardinal, who usually presides over the ceremony, holds the vials of blood.   The miracle occurs when the bust reliquary containing the head of the saint is brought near.   When the liquefaction is accomplished in full view of the spectators, the cardinal announces, “The miracle has happened,” words that cause great rejoicing and the chanting of the Te Deum.

“The Neapolitans honour this saint as the principal patron of their city and nation and the Lord himself has continued to honour him, by allowing many miracles to be wrought through his intercession, particularly when the frightful eruptions of Mount Vesuvius have threatened the city of Naples with utter destruction.   While the relics of St Januarius were being brought in procession towards this terrific volcano, the torrents of lava and liquid fire which it emitted have ceased, or turned their course from the city.   But the most stupendous miracle and that which is greatly celebrated in the church, is the liquefying and boiling up of this blessed martyr’s blood whenever the vials are brought in sight of his head. This miracle is renewed many times in the year, in presence of all who desire to witness it; yet some heretics have endeavoured to throw a doubt upon its genuineness, by frivolous and incoherent explanations;  but no one can deny the effect to be miraculous, unless he be prepared to question the evidence of his senses.”