Our Lady of Mercy/Our Lady of Ransom:
Commemorates the foundation of the Mercedarian Order and the apparition of Our Lady of Ransom. In this appearance she carried two bags of coins for use in ransoming Christians imprisoned by Moors. On 10 August 1218, the Mercedarian Order was legally constituted at Barcelona, Spain by King James of Aragon and was approved by Pope Gregory IX on 17 January 1235. The Mercedarians celebrated their institution on the Sunday nearest to 1 August because it was on 1 August 1218 that the Blessed Virgin showed Saint Peter Nolasco the white habit of the Order. This custom was approved by the Congregation of Rites on 4 April 1615. On 22 February 1696 it was extended to the entire Latin Church and the date changed to 24 September.
Patronages –
• Bahía Blanca, Argentina, archdiocese of
• Barcelona, Spain
• Dominican Republic 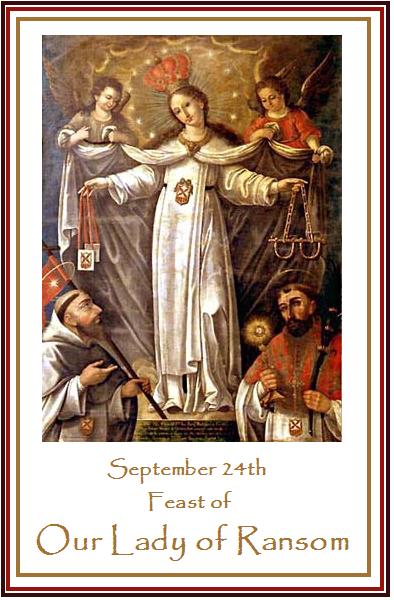 Our Lady of Walsingham/Virgin of the Sea: In 1061 Lady Richeldis de Faverches, lady of the manor near the village of Walsingham, Norfolk, England, was taken in spirit to Nazareth. There Our Lady asked her to build a replica, in Norfolk, of the Holy House where she had been born, grew up, and received the Annunciation of Christ’s impending birth. She immediately did, constructing a house 23’6″ by 12’10” according to the plan given her. Its fame slowly spread, and in 1150 a group of Augustinian Canons built a priory beside it. Its fame continued to grow, and for centuries it was a point of pilgrimage for all classes, the recipient of many expensive gifts.
In 1534 Walsingham became one of the first houses to sign the Oath of Supremacy, recognizing Henry VIII as head of the Church in England. Dissenters were executed, and in 1538 the House was stripped of its valuables, its statue of the Virgin taken to London, England to be burned, its buildings used as farm sheds for the next three centuries.
In 1896 Charlotte Boyd purchased the old Slipper Chapel and donated it to Downside Abbey. In 1897 Pope Leo XIII re-founded the ancient shrine of Our Lady of Walsingham, and pilgrimages were permitted to resume. The statue of Our Lady was re-enshrined in 1922, beginning an era of cooperation at the shrine between Catholics and Anglicans. In 1981 construction began on the Chapel of Reconciliation, a cooperative effort between the two confessions, and located near the shrine. The feast of Our Lady of Walsingham was reinstated in 2000. In 2012 the Personal Ordinariate of the Chair of Saint Peter for Anglicans joining the Church was given its patron as the Blessed Virgin Mary under the title Our Lady of Walsingham.
Patronages –
• England
• East Anglia, England, diocese of
• Personal Ordinariate of the Chair of Saint Peter 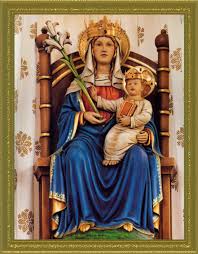