The remarkable story of Saint Eustachius, is a lesson given by God Himself on the marvels of His Divine Providence.   He was a distinguished and very wealthy officer of the Roman army under the Emperor Trajan, in the beginning of the second century.   He practised generous charity to the poor, although he had not yet perceived the errors of idolatry.

One day, while this distinguished officer was vainly pursuing a deer, the animal suddenly stood immobile before him in the light of a hilltop and he perceived between its horns a luminous cross.   On the cross was the image of the crucified Saviour and a voice said to him, ‘I am the Christ whom you honour without knowing it;  the alms you give to the poor have reached Me.’   Like Saint Paul, he fell from his horse and remained inert for a time.   Coming to himself, he said interiorly, What is this voice I have heard?   You who speak to me, who are you, that I may believe in you?   And the Lord told him interiorly that He was the Creator of the light, of the seasons, of man and all things visible, that He had suffered to save the human race, died and been buried but had risen the third day.

This was sufficient and the officer went home to fulfil the prescription he had received to be baptised with his wife and two young sons.   His spouse had received a similar revelation at the same time as himself and they all went to the Christian authority of the region in secret, to be baptised the same night.

In a short time he lost all his possessions through natural catastrophes and robbers.   But he had been advised beforehand that the Lord wanted to make of him another Job, that already the ancient enemy had plotted against him and that he was not to allow any thought of blasphemy to arise in his heart amid the sufferings that were awaiting him. He prayed for strength and retired from the region after the calamities, with his wife and children.   When by unforeseeable and extraordinary accidents, his wife and children were also taken from him and he believed the children dead, he was close to despair and wished his life might end but the warning of the Lord returned to his mind and he entered into the service of a land-owner of a village called Badyssus, to tend the fields. He remained for fifteen years in this occupation.   During this time his loved ones were well and safe, all spared in the perilous circumstances which had removed them from his sight but separated, each one like himself, from the three others.

In those days the empire was suffering greatly from the ravages of barbarians and was sinking under the assaults.   The emperor Trajan had Eustachius sought out and when he was found, had him clothed in splendid garments to give him command over the troops he intended to send against the invaders.   During the celebration that accompanied his return, he related to the emperor all that had occurred to him.   When the troops were being assembled, his own sons were conscripted.   Seeing them, he noticed them as young men taller than most and of great nobility of bearing and countenance and kept them near him without yet recognising them.   One of the two, while on bivouac near the very house of his own mother, who like Eustachius had taken employment in the garden of a landowner, related the confused memories of his childhood to his companion. Suddenly, the two brothers recognised one another and embraced in an effusion of joy.

Their mother, by a delicate attention of Providence, had chanced to overhear them and reflecting on what she heard, became certain they were her own sons.   She went to the captain of the campaign to inquire about them and immediately recognised him.   Not wishing to startle him, she began to relate her story, identifying herself as the wife of a certain Placidus and saying she believed she was now in the presence of her two sons from whom she had been separated and whom she had not seen for long years.   One must imagine the sentiments of the captain on hearing this narration, the reunion which followed and the prayers of thanksgiving sent up to God by the family and also the troops, who joined them in their joy and prayers.

Returning to Rome victorious, Eustachius was received in triumph and greatly honoured, but when commanded to sacrifice during the celebration to the false gods, refused.   The infuriated emperor Adrian — for Trajan had died — ordered him with his wife and children to be exposed to a starved lion.   But instead of harming these servants of God, the beast came up to them, lowered its head as if in homage and left the arena.   The emperor, more furious still, caused the martyrs to be shut up inside a brazen bull, under which a fire was to be kindled, that they might be roasted to death.   Saint Eustachius prayed aloud and thanked God, asking Him who had reunited them to cause that their lives end at the same time, so they might be received together by Him into the happiness of His presence.   They expired but neither their bodies nor even their hair was injured. They were found entire the next day and at first it was believed they were still alive. Many believed in Christ through this final miracle, which to us today seems perhaps less miraculous than the story of their existence while alive.   A church in honour of the martyrs still exists in Rome:  Saint-Eustachius in Thermis.

Eustachius became known as a patron saint of hunters and firefighters and also of anyone facing adversity;  he was traditionally included among the Fourteen Holy Helpers. He is one of the patron saints of Madri  d, Spain. The island of Sint Eustatius in the Caribbean Netherlands is named after him.   The d’Afflitto, one of the oldest princely families in Italy, claim to be direct descendants of Saint Eustachius.

The novels “The Herb of Grace” (US title: Pilgrim’s Inn) (1948) by British author Elizabeth Goudge and Riddley Walker (1980) by American author Russell Hoban, incorporate the legend into their plot.   It has also inspired the film Imagination.

The saint’s cross-and-stag symbol is featured on bottles of Jägermeister, a German alcoholic digestif.   This is related to his status as patron of hunters; a Jägermeister was a senior foresters and gamekeeper in the German civil service until 1934, prior to the drink’s introduction in 1935.   Jägermeister has a round logo of a shining cross between the antlers of a deer/stag referring to two persons who had seen such a vision: Saint Hubertus and Saint Eustachius. 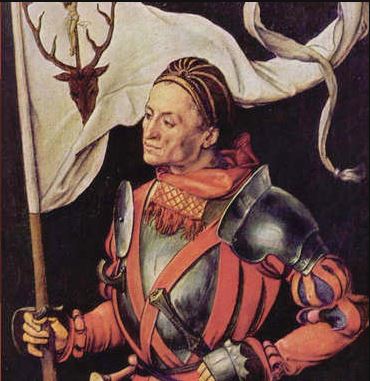 Saint Eustachius has a church dedicated to him in the southern part of India – he is called Saint Esthak in this part of the world and in County Kildare, Ireland.   There is a church dedicated to him on the campus of Newbridge College in Newbridge, County Kildare and the schools’ logo and motto is influenced by the vision of Saint Eustachius;  a nearby village is named Ballymore Eustace.

Sant’Eustachio is also honoured in Tocco da Casauria, a town in the Province of Pescara in the Abruzzo region of central Italy.   The town’s church, built in the twelfth century, was dedicated to Saint Eustachius.   It was rebuilt after being partially destroyed by an earthquake in 1706.

About the 14 Holy Helpers here