“St Thomas Aquinas concisely expressed the nature of religion in these words: “The object of religion is to give honour to the One God because, He is the first principle of creation and order in the universe” (Summa Theologiae, II-II, q 81, a 3).

We know that everything is the work of God.
Everything depends on Him, both for it’s being and for it’s continued existence.
This is so from man, down to the minutest insect, from the stars in the sky, to the invisible atom.
It is true that man and the other creatures also work.
In fact, the universe is a gigantic workshop.
But God, is the one and only cause of man and of the whole of nature.
We are only instruments of the divine omnipotence.
Now, justice demands that we give everyone his due.
Everything belongs to God.
Therefore, man out to humble himself before God, in an act of adoration and loving obedience.
From the highest mountains to the depths of the valley, from the stars of the firmament to the tiny flowers of the fields, all creation unconsciously sings of the glory of God.
In the same way, man, a creature of intelligence and free will, should offer himself and all his faculties, in an act of complete homage to his Creator and Lord.
But, there is more to it than that.
God is not only our Creator and Lord, He is also our Redeemer.
The eternal Word of God became man out of love for us.
He gave us His teaching and commandments.
He redeemed us with His precious blood and left us the Church, as our mother and our infallible teacher of truth.
So, if religion is to be complete, it will oblige us to be obedient to whatever God has revealed and to whatever the Church, which He founded commands and teaches us.” 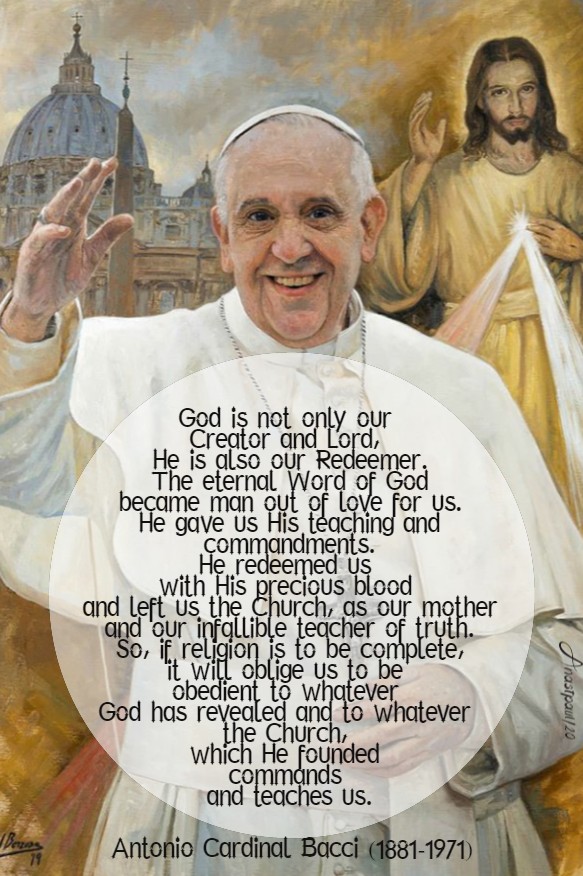