Thought for the Day – 7 August – The Memorial of St Cajetan

St Cajetan sought first and foremost, the will of the Lord in his life.
Dedicated not only to Church reform but to also reform of the evils of the world he encountered on a daily basis, this humble saint gave all that he had to service of those around him.
He worked with the poorest of the poor, the sickest of the sick, the most undesirable souls he could find—nursing them physically back to help, assisting with their finances and most of all, he worked hard to save and convert their souls.
The greatest need of the time was the reformation of a Church that was “sick in head and members.”
Cajetan and three friends decided that the best road to reformation lay in reviving the spirit and zeal of the clergy.
Together they founded a congregation known as the Theatines–from Teate [Chieti] where their first superior-bishop had his see. One of these friends later became Pope Paul IV.
Saint Cajetan is a model of obedience, service and Christian charity—three virtues we can all ascribe to.
We pray for the intercession of St Cajetan, that we, too, may turn our gaze from our own lives to those around us in greater need.

St Cajetan, pray for us!

As St. Dominic lay dying just outside of Bologna at St. Mary of the Hills, he requested to be taken back at once to Bologna that he might be buried “under the feet of my brethren.”   There, having assured his spiritual children that he would be of greater assistance where he was going, he left them his last will and testament:  “Behold, my children, the heritage I leave you:  have charity for one another, guard humility, make your treasure out of voluntary poverty.”

Be therefore followers of me, even as I also am of Christ. (1 Corinthians 11:1)

O wondrous hope that you did give at the hour of death to those who mourned you, when you did promise to help them even after death.

You who did shine by so many signs in the bodies of the afflicted, bear us the help of Christ and heal our souls in illness and unrest.

Pray for us, blessed St Dominic, That we may be made worthy of the promises of Christ.

O God, who enlightened Your Church
by the merits and teachings of blessed Dominic, Your confessor
grant through his intercession
we may never be destitute of temporal help
and may always increase in spiritual growth.
that persevering until death, we may,
ever work for the glory of God
and the salvation of souls,
especially the return to the one, true, faith
of our family and friends who have lapsed.
Finally, we ask for this our special intention …
(make your request)
Through Christ our Lord. Amen

Quotes of the Day – 7 August – The Memorial of St Cajetan

“Do not receive Christ in the Blessed Sacrament
so that you may use Him as you judge best
but give yourself to Him
and let Him receive you in this Sacrament,
so that He Himself, God your Saviour,
may do to you and through you whatever He wills.”

“I am a sinner and do not think much of myself;
I have recourse to the greatest servants of the Lord,
that they may pray for me to the blessed Christ and his Mother.
But do not forget that all the saints cannot endear you to Christ
as much as you can yourself.
It is entirely up to you!” 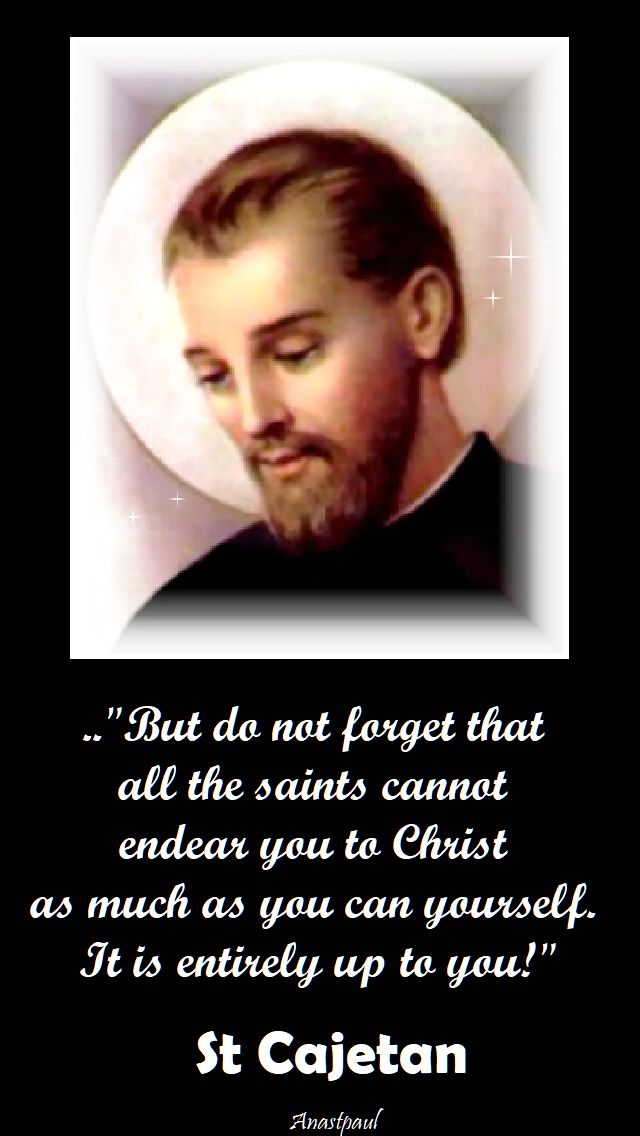 Though my father and my mother forsake me, yet will the Lord receive me….Psalm 27:10

REFLECTION – “If you want Christ to love you and help you, you must love Him and always make every endeavour to please Him.
Do not waver in your purpose because even if all the saints and every single creature were to abandon you, He will always be near you, no matter what your needs may be.”….St Cajetan

PRAYER – Lord God, You inspired St Cajetan to live and work like the Apostles. Help us, by his example and prayers, to trust in You at all times and continually to seek Your Kingdom. St Cajetan pray for us, amen.

Prayer for Peace to the Immaculate Virgin
By Pope Paul IV

Look down with maternal clemency,
most Blessed Immaculate Virgin,
upon all your children.
Consider the anxiety of bishops
who fear that their flocks
will be tormented by a terrible storm of evils.
Heed the anguish of so many people,
fathers and mothers of families
who are uncertain about their future
and beset by hardships and cares.
Soothe the minds of those at war
and inspire them with “thoughts of peace.”
Through your intercession,
may God, the avenger of injuries,
turn to mercy.
May He give back to nations
the tranquility they seek
and bring them to a lasting age
of genuine prosperity. Amen

(Juan Pedro Carrafa, Bishop of Chieti, who became Pope Paul IV,
was a friend of and one of the Founders with, our Saint today,
St Cajetan of the Theatine Clerics Regular) 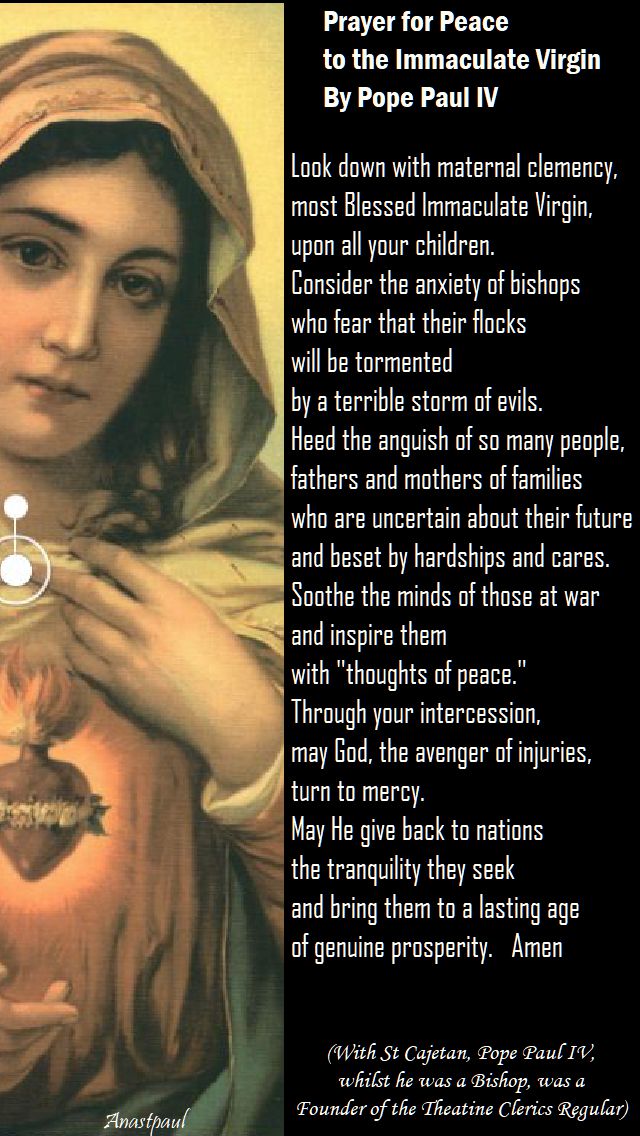 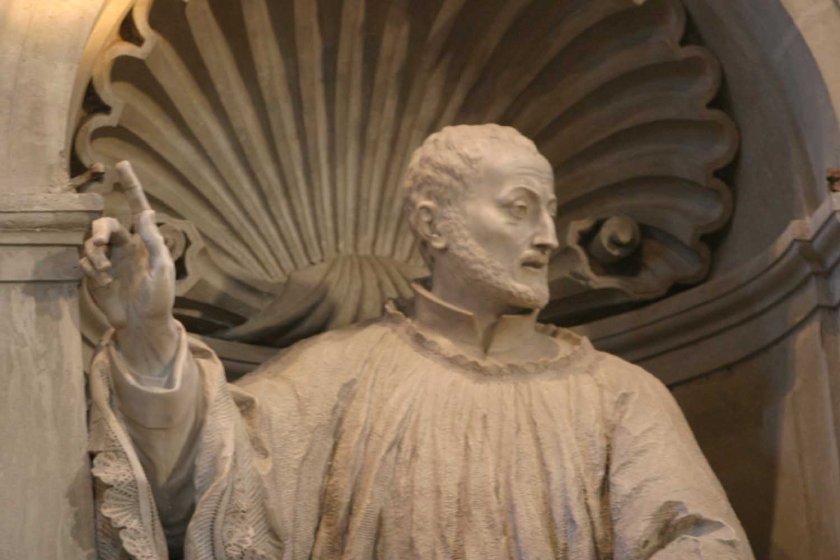 St Cajetan was born of a noble family in Vicenza, Italy. He was the youngest of three sons born to Don Gaspar di Thiene and Dona Maria di Porto.

He studied civil and Canon Law at the University of Padua and moved to Rome where he worked in the Court of Julian II.   He assisted at the fifth Council of the Lateran.   He was ordained a priest and became part of the “company of Divine Love.”   In 1518 he returned to Vicenza.   After the death of his mother, he dedicated himself to the founding and directing of hospitals to treat the syphiletics in Vicenza, Verona and Venice.  With his own hands he cared for the sick.   Such zeal did he show for the salvation of his fellowmen that he was surnamed the “huntsman for souls.” 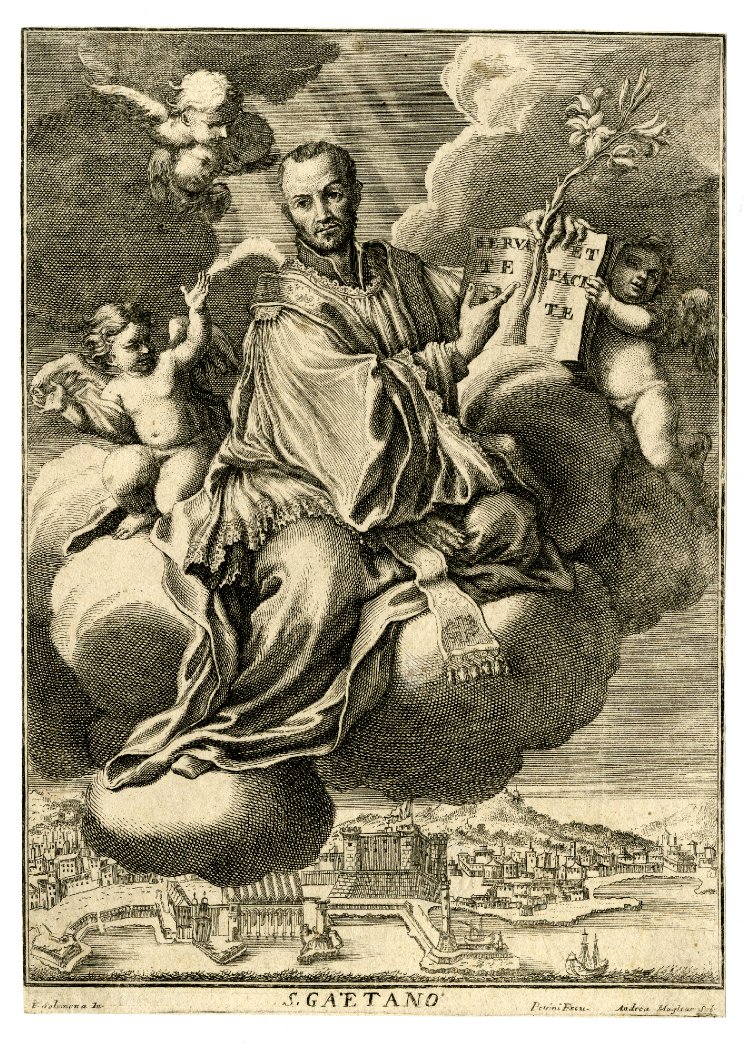 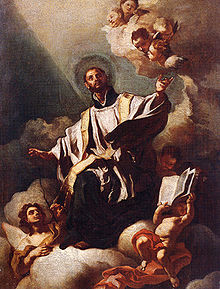 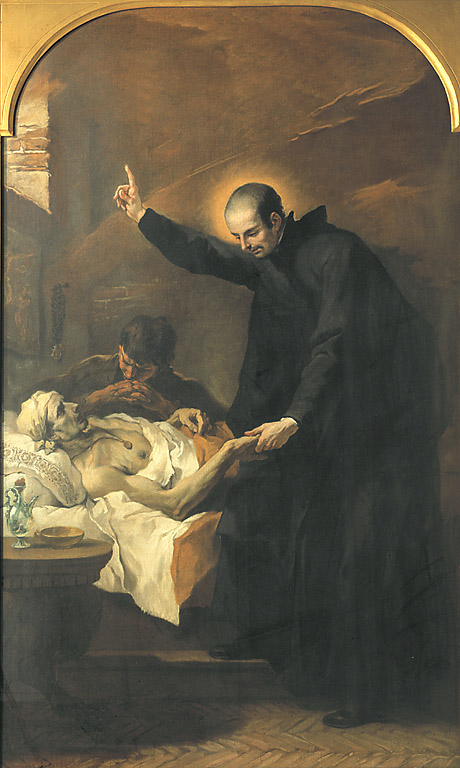 In 1524, with Juan Pedro Carrafa, Bishop of Chieti, he founded the Clerics Regular who later would be called the Theatines.   One of the four men who joined him in his new order, Juan Pedro mentioned above, went on to become the pope (Pope Paul IV).  The Theatines, as they were later to become, were to be a community of priests who were to lead an apostolic life.   They were to look with disdain all earthly belongings, to accept no salaries from the faithful;  only from that which was freely donated were they allowed to retain the means of livelihood.   St Cajetan was tortured during the plunder of Rome in 1527 (the torturers hoping to obtain his inheritance which had long before been spent on the poor and sick), Cajetan later returned to Venice where for three years he directed the Religious Institute he had founded.   In 1533, where he established a centre for opposing the spread of Lutheranism in Naples.   He eventually extended that mission to the city of Verona where he would die fourteen years later in 1547.   It was in this city that he planted the yeast of reform that made him worthy of the devotion with which the Neopolitans have always awarded him.   He founded a bank to help the poor and offer an alternative to usurers (loan sharks).   It later became the Bank of Naples.   His concern for the unemployed, giving them the necessary financial help in their time of need, made him their patron.    Later in his life, Saint Cajetan would introduce the Forty Hours’ Adoration of the Blessed Sacrament, as an antidote to the heresy of Calvin.   In 1629, Urban VIII authorised public worship to Cajetan and on April 12, 1671, Clement X inscribed him in the catalogue of Saints. 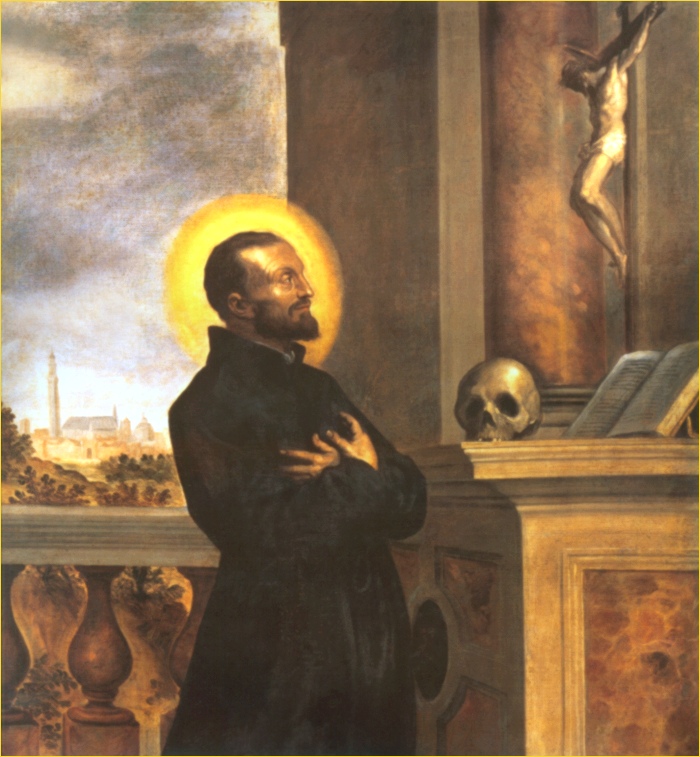 St Cajetan often prayed eight hours daily.   On Christmas Eve at the Church of Saint Mary Major he was greeted with his first vision of Our Blessed mother.   When he entered the church he saw the Mary, radiant with light, who came to him and placed Her divine Infant in his arms.   These are the words he used to describe his vision: “….I boldly found myself, at the time of the Holy Nativity, in this crib; to give me courage I had with me Saint Jerome my father, who had the crib so close to his heart and whose remains were placed at the entrance of the same crib;  and with a little bit of encouragement from the old man (St. Joseph), from the hands of the Virgin Mary, I took into my arms that little Baby:  the Eternal Word Who became flesh.   My heart was really hard, you must believe me, because if it were not as hard as a diamond, it was sure to liquefy at that moment… patience…” 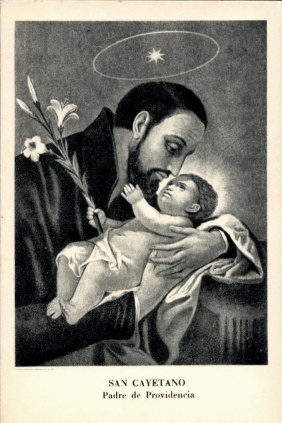 St Cajetan is the “Heart” of the Catholic reformation, the founder of the Clerics Regular (Theatines) and the “Great Man and Great Saint” that Christians acclaim as “The Father of Providence” for he aids those who invoke him in their needs with great miracles.

Prayer of Saint Cajetan before a Crucifix

Look down, O Lord, from Your sanctuary, from Your dwelling in heaven on high and behold this sacred Victim which our great High Priest, Your Holy Son our Lord Jesus Christ, offers up to You for the sins of His brethren and be appeased despite the multitude of our sins.   Behold, the voice of the Blood of Jesus, our Brother, cries to You from the cross.   Listen, O Lord.   Be appeased, O Lord.   Hearken and do not delay for Your own sake, O my God;  for Your Name is invoked upon this city and upon Your people and deal with us according to Your mercy. Amen.

St Cajetan “Father of Providence” Pray for us!

Martyrs of Como – 6 saints: A group of Christian soldiers in the imperial Roman army. Martyred in the persecutions of Maximian. We know little else but the names – Carpophorus, Cassius, Exanthus, Licinius, Secundus and Severinus. c.295 on the north side of Lake Como, near Samolaco, Italy. Their relics in the church of San Carpoforo, Como, Italy.