The life of St. Raymond Nonnatus is a life filled with extraordinary facts – from his birth after his mother had already died.   Then, consider the torment he suffered of having a padlock perforating his lips.   Imagine the enormous pain and discomfort of having a padlock cutting through one’s lips even in sleep.   Think how this would bother a man and disturb his nervous system!   Then, each time that he had to eat, a Moor would come and open the padlock, breaking the wounds anew and causing new sufferings.   Closing it would produce additional torments.   Was he allowed to drink water during the day?   Can you imagine the discomfort of drinking anything in this situation? He endured this life for the period of eight months.

What did he do when he was freed?   Did he have a psychological breakdown?   Become discouraged?   Feel sorry for himself?   No.   He took an extraordinarily manly attitude and returned to a life of intense activity.   You see how he resisted the temptations to feel sorry for himself and stop fighting for the Catholic cause.   His attitude demanded a highly supernatural spirit and a strong virile personality.   You see the astonishing fortitude of soul such a man had.   He returned and continued an active life for another ten years or so.

He traveled throughout Europe as an ambassador of the Pope and a preacher of the Crusade.   What a powerful impression the word of his sermons delivered by his wounded lips must have made on the people!

Imagine such a scene:  St. Raymond Nonnatus arriving in a city;  the bells ringing and the word spreading that Fr. Raymond – the one with the wounded lips – is in town to preach a Crusade on behalf of the Pope.   All the nobles and people of the area gather around with their families and he begins to speak.   He speaks about the meaning of the Sepulchre of Our Lord Jesus Christ and what its profanation represents.   How it is necessary to re-conquer it for the glory of God and Catholic honour.   He speaks with the voice and prestige of a saint, with the supernatural power of communication that only the saints have.

The hearts of men opened to saints like St Raymond Nonnatus and St. Bernard who preached the Crusade

The hearts of the knights begin to be touched, the ladies weep and give their consent for their husbands to go and fight for the Holy Land.   Everyone goes to Confession and the date of the Crusade is announced.   The practical preparations start.   All this happens because a saint passes through that area.

This imaginary scene may help you to understand what the Middle Ages was.   The influence of the saints and the good reception the people gave them is what really explains why the Middle Ages had so many wonderful things and our epoch does not. The key is the presence of the saints and the openness people had for them.   How few saints there are today!   Knowing this, we understand the tragedy of the contemporary situation of the Church and the world.

Let us ask St. Raymond Nonnatus to give us more saints to regenerate the Church and the world and make the modern man recognise them and be receptive to their message.

St Raymond Nonnatus, pray for us! 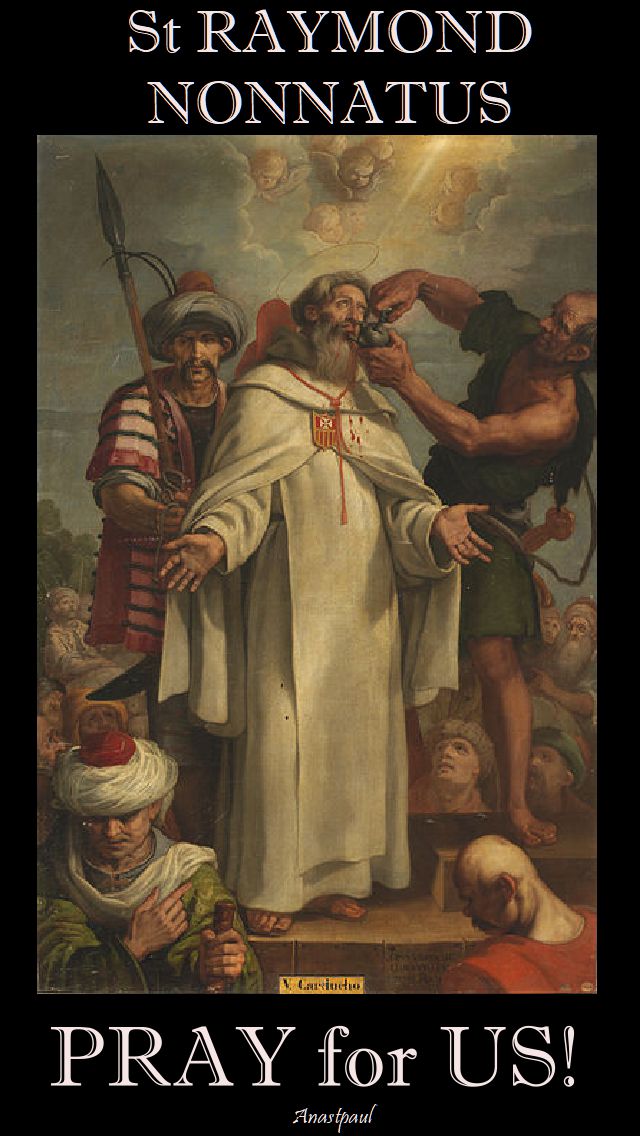 “Let us remember one another in concord and unanimity.   Let us on both sides of death always pray for one another.   Let us relieve burdens and afflictions by mutual love, that if one of us, by the swiftness of divine condescension, shall go hence the first, our love may continue in the presence of the Lord and our prayers for our brethren and sisters not cease in the presence of the Father’s mercy.” 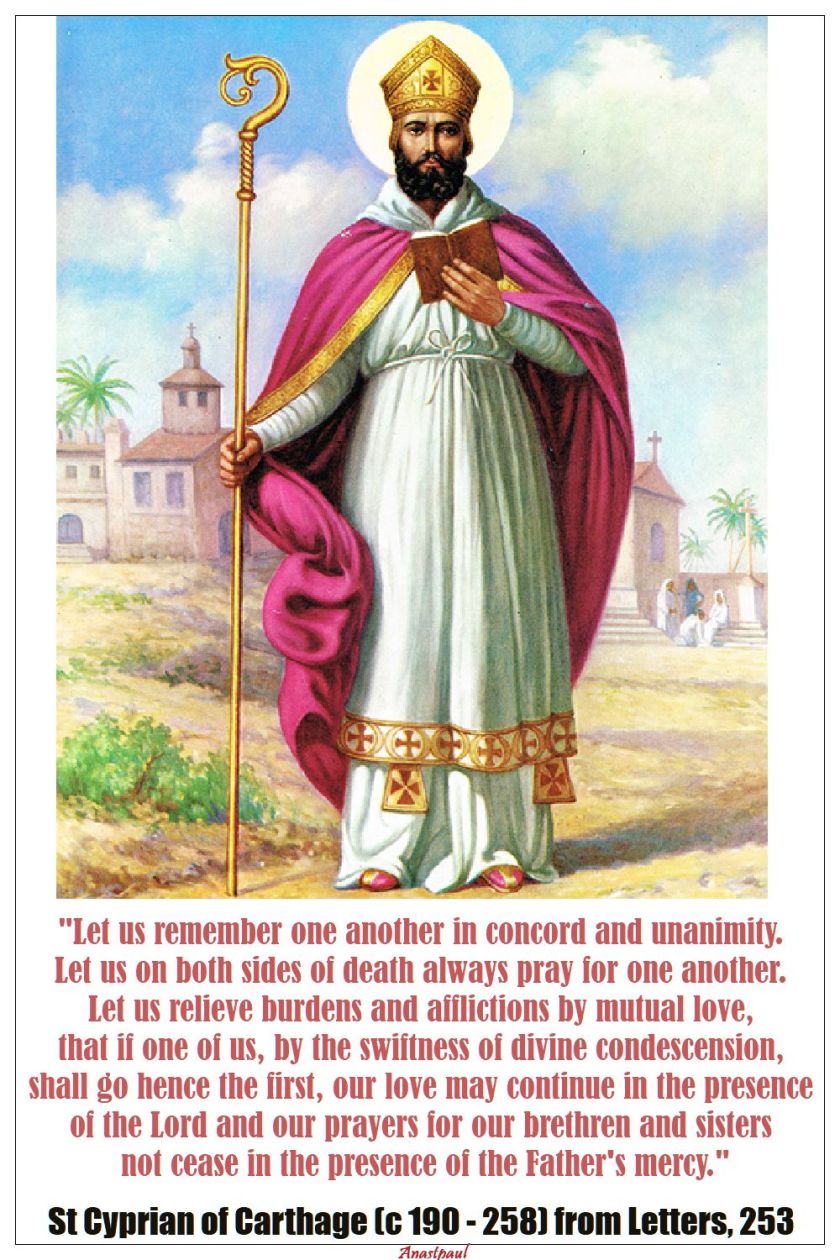 Jesus said to his disciples: ‘So stay awake, because you do not know the day when your master is coming.’...Matthew 24:42

REFLECTION – “You have been created for the glory of God and your own eternal salvation…..This is your goal! This is the centre of your life; this is the treasure of your heart.   If you reach your goal you will find happiness. If you fail to reach it, you will find misery.”……St Robert Bellarmine (1542-1621) Doctor of the Church

PRAYER – My Lord and my God, help me eternal Father, to stay awake!   Teach me to be constantly on guard against my own weakness, to constantly keep watch for temptation and to live constantly in prayer, that Your Son will lead me to safety.   St Raymond Nonnatus, you suffered torture but always remain prayerful and awake, waiting for the Lord, please pray for me, amen. 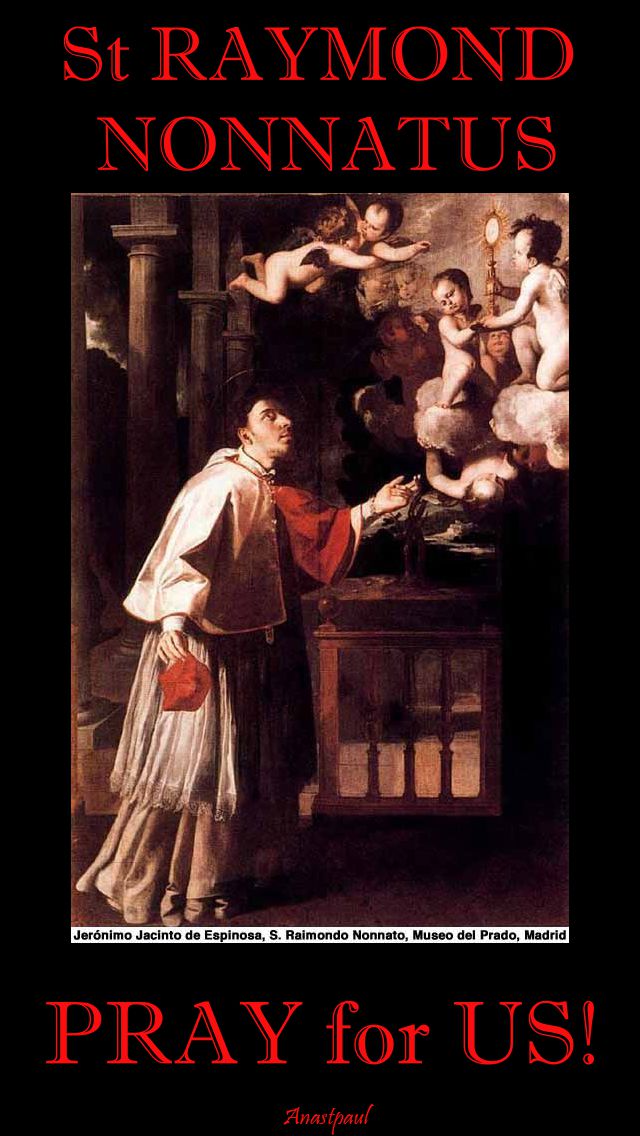 O Lord my God.
Teach my heart this day
where and how to find You.
You have made me and re-made me,
and You have bestowed on me
all the good things I possess,
and still I do not know You.
I have not yet done
that for which I was made.
Teach me to seek You,
for I cannot seek You
unless you teach me,
or find You
unless You show Yourself to me.
Let me seek You in my desire;
let me desire You in my seeking.
Let me find You by loving You;
let me love You when I find You. Amen 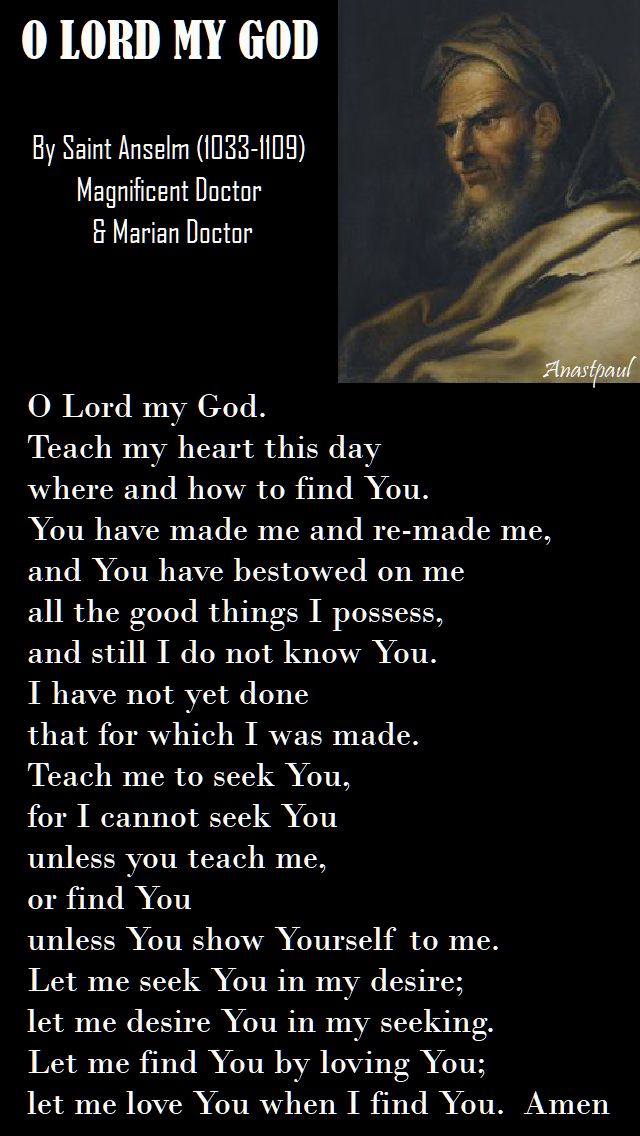 Saint of the Day – 31 August – St Raymond Nonnatus O.deM (1204-1240). Religious Priest, Confessor, Cardinal, Founder of the Mercedarian Order.  He was delivered by caesarean operation when his mother died in childbirth; hence the name non natus = not born. Born in  1204 at Portella, diocese of Urgel, Catalonia, Spain and died on 31 August 1240 at Cardona, Spain of a fever.   He was buried at the Chapel of Saint Nicholas near his family farm he was supposed to have managed.   He was Beatified on 5 November 1625 by Pope Urban VIII (cultus confirmed) and Canonised on 1657 by Pope Alexander VII.   Patronages – against gossip, of silence, against fever, of babies, infants, newborns, childbirth, children, expectant mothers, pregnant women, falsely accused people, midwives, obstetricians, Baltoa, Dominican Republic, San Ramon, Costa Rica.

From the time he was very young, he manifested a great devotion to the Most Holy Virgin.   He prayed the Rosary every day in the hermitage of St. Nicholas of Mira  . Once Our Lady appeared to him and promised him her protection.   Afterward he was strongly tempted to sin against chastity but did not fall.   He went to thank his Patroness and consecrated his virginity to her.   Mary appeared to him again, showing her satisfaction and advising him to enter the Order of the Mercedarians (Order of Mercy), whose foundation she had inspired St. Peter Nolasco to make only shortly before, in 1218.

He was ordained a Priest and dedicated himself to the redemption of captives until 1231. He liberated 140 captives in Valencia, 250 in Argel and 28 in Tunis.   It was in this last city that he had the occasion to fulfill the special fourth vow of the Mercedarians to offer themselves to remain in captivity in the place of Catholic prisoners.   Since he was unable to pay the ransom demanded by the slave dealers in Tunis, Raymond offered himself to take the place of some prisoners.

The trade was made and he began a hard captivity.   To prevent him from speaking about Our Lord, for his engaging words were converting numerous Muslims, the Arabian slave masters pierced his lips with a red-hot iron and closed them with a padlock.   This padlock was only opened for him to eat.   After eight months of this torment, other Mercedarians arrived from Spain bringing the demanded ransom.

The last ten years of his life were spent in Rome, where he became the representative of his Order and in traveling throughout different countries to preach the Crusade.   As a cardinal representative of Pope Gregory IX he was sent to meet with St Louis of France and encourage him to go on the Crusade, which actually took place 10 years later.

St. Raymond Nonnatus died in Cardona, a Spanish village close to Barcelona, on August 31, 1240. He was only 37-years-old.

One particular devotion is centered around the padlock that is part of his martyrdom. Locks are placed at his altar representing a prayer request to end gossip, rumours, false testimonies and other sins of the tongue.   The locks are used as a visible sign of such prayer request, which first and foremost must take place interiorly, a prayer to God through St. Raymond’s intercession.

The Mercedarians – Order of the Blessed Virgin Mary of Mercy:

The Order of the Blessed Virgin Mary of Mercy is an international community of priests and brothers who live a life of prayer and communal fraternity.   In addition to the vows of poverty, chastity and obedience, their members take a special fourth vow to give up their own selves for others whose faith is in danger.

The Order, also called the Mercedarians, or Order of Mercy, was founded in 1218 in Spain by St Peter Nolasco to redeem Christian captives from their Muslim captors.   The Order exists today in 17 countries, including Spain, Italy, Brazil, India and the United States.

Today, friars of the Order of Mercy continue to rescue others from modern types of captivity, such as social, political, and psychological forms.   They work in jails, marginal neighborhoods, among addicts and in hospitals.

The spiritual and communal life of the friars include prayer, meditation, Holy Mass, recreation and apostolate.   Their life is based on the Rule of St. Augustine and the Constitutions of the Order.

Overall, the Order of Mercy commits itself to give testimony to the same Good News of love and redemption that it has shown since the beginning of its history.