“Dear brothers and sisters, celebrating the martyrdom of St John the Baptist reminds us too, Christians of this time, that with love for Christ, for His words and for the Truth, we cannot stoop to compromises.   The Truth is Truth; there are no compromises.   Christian life demands, so to speak, the “martyrdom” of daily fidelity to the Gospel, the courage, that is, to let Christ grow within us and let Him be the One who guides our thought and our actions.    However, this can happen in our life only if we have a solid relationship with God.   Prayer is not time wasted, it does not take away time from our activities, even apostolic activities but exactly the opposite is true:   only if we are able to have a faithful, constant and trusting life of prayer will God Himself give us the ability and strength to live happily and serenely, to surmount difficulties and to witness courageously to Him.   St John the Baptist, intercede for us, that we may be ever able to preserve the primacy of God in our life. ”   (Pope Benedict – Castel Gandolfo, Wednesday, 29 August 2012) 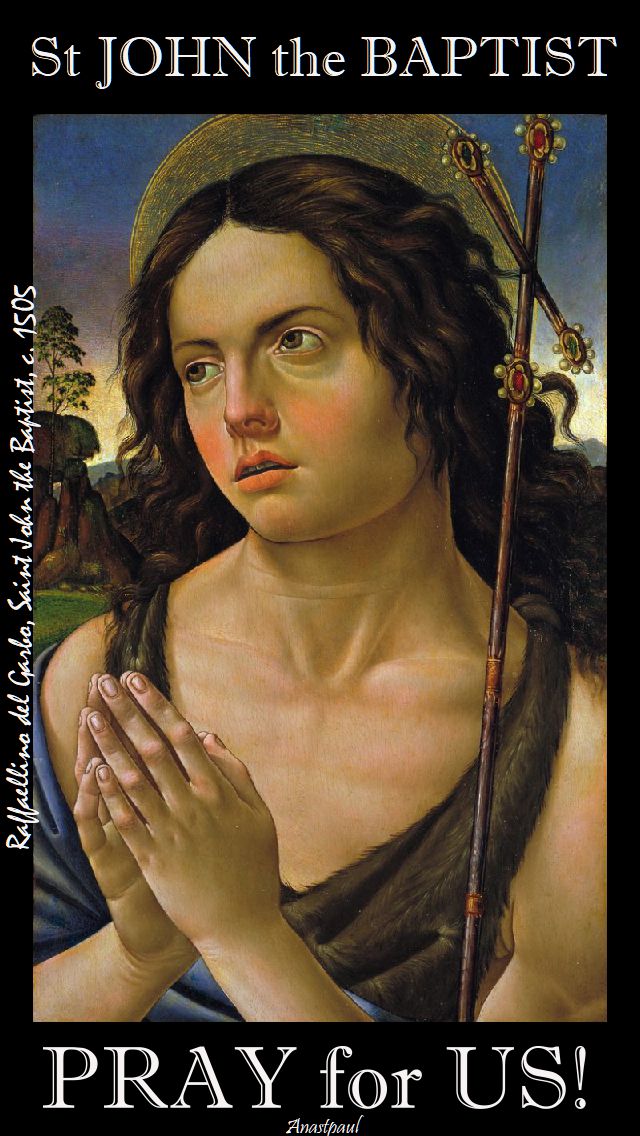 “The vengeance of God fell heavily upon Herod Antipas.   Josephus relates how he was overcome by the Arabian Aretas, whose daughter he had repudiated in order to follow his wicked passions;  and the Jews attributed the defeat to the murder of Saint John. Herod was deposed by Rome from his tetrarchate and banished to Lyons in Gaul, where the ambitious Herodias shared his disgrace.   As to her dancing daughter Salome, there is a tradition gathered from ancient authors, that, having gone out one winter day to dance upon a frozen river, she fell through into the water;  the ice, immediately closing round her neck, cut off her head, which bounded upon the surface, thus continuing for some moments the dance of death.” ………..Abbot Gueranger 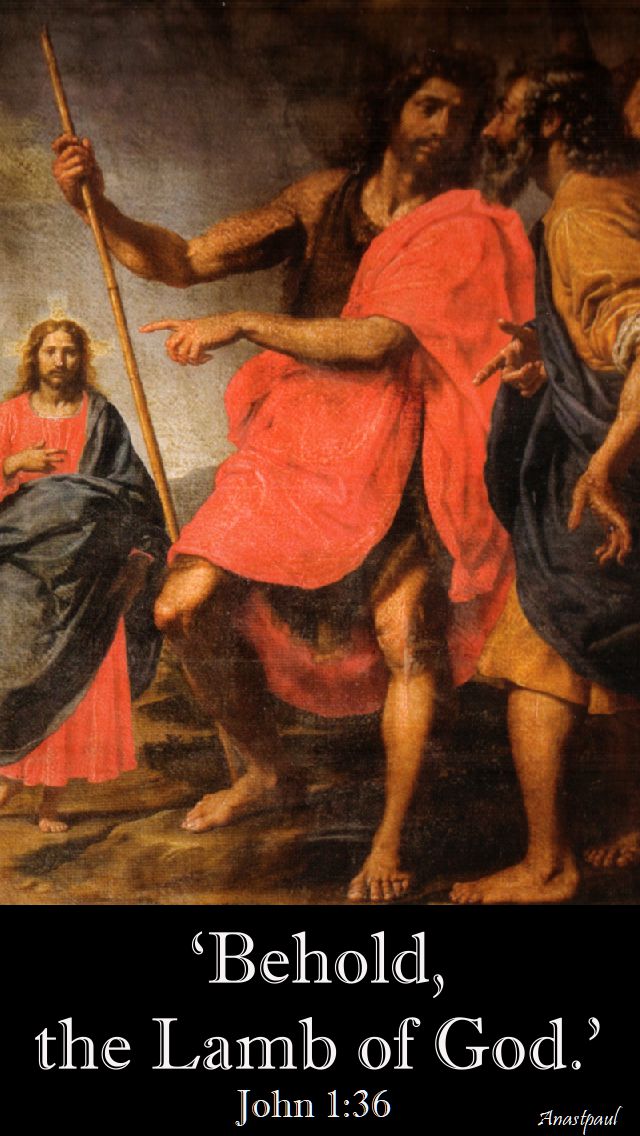 She went out and said to her mother, “What shall I ask for?” She replied, “The head of John the Baptist.”…Mark 6:24 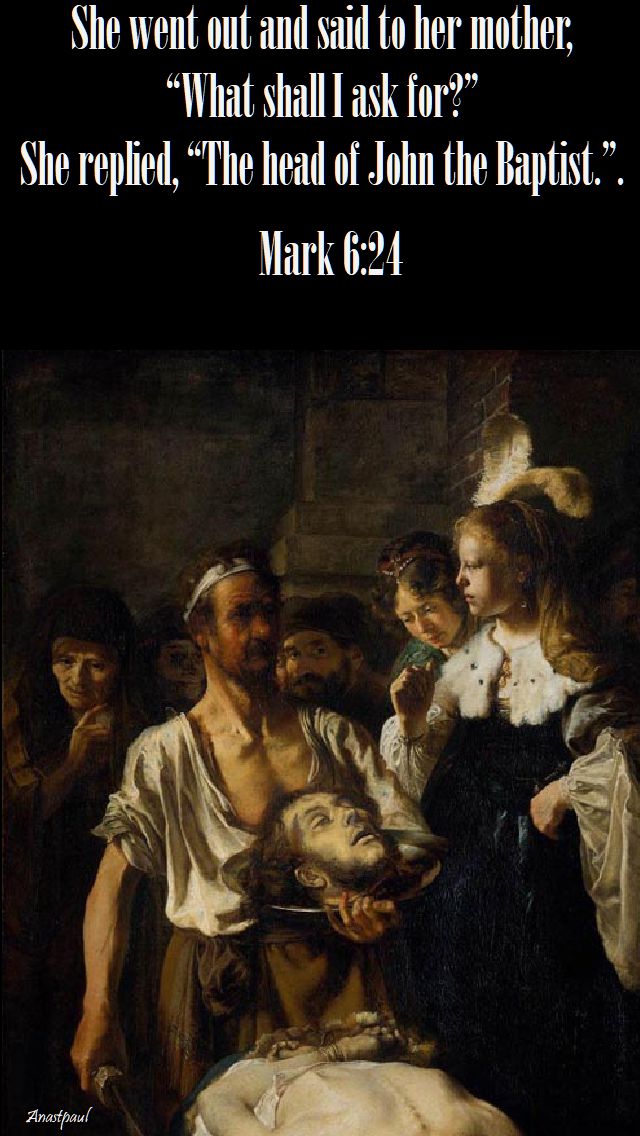 REFLECTION – “O great and admirable mystery! He must increase, but I must decrease, said John, said the voice which personified all the voices that had gone before announcing the Father’s Word Incarnate in His Christ….   But He is said to grow in us, when we grow in Him.   To him, then, who draws near to Christ, to him who makes progress in the contemplation of wisdom, words are of little use; of necessity they tend to fail altogether.   Thus the ministry of the voice falls short in proportion as the soul progresses towards the Word;  it is thus that Christ must increase and John decrease.   The same is indicated by the beheading of John and the exaltation of Christ upon the Cross;  as it had already been shown by their birthdays:  for, from the birth of John the days begin to shorten and from the birth of Our Lord they begin to grow longer.”….St Augustine (354-420) 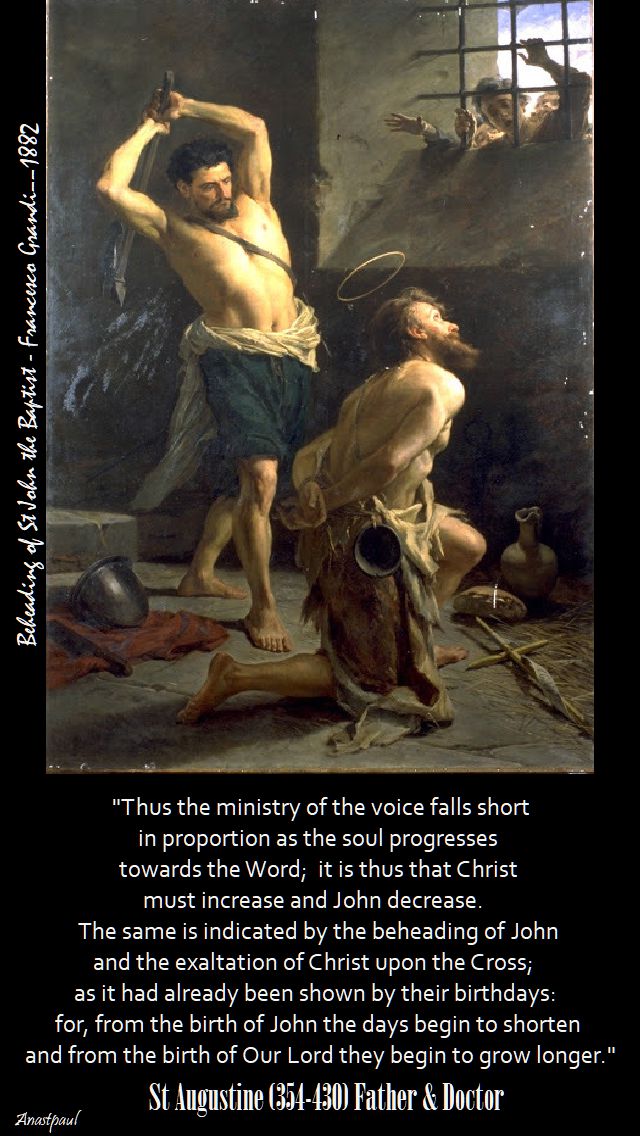 PRAYER – God our Father, You appointed St John The Baptist to be the herald of the birth and death of Christ Your Son. Grant that as he died a martyr for justice and truth, so we may also courageously bear witness to Your Word. St John the Baptist, pray for us, amen. 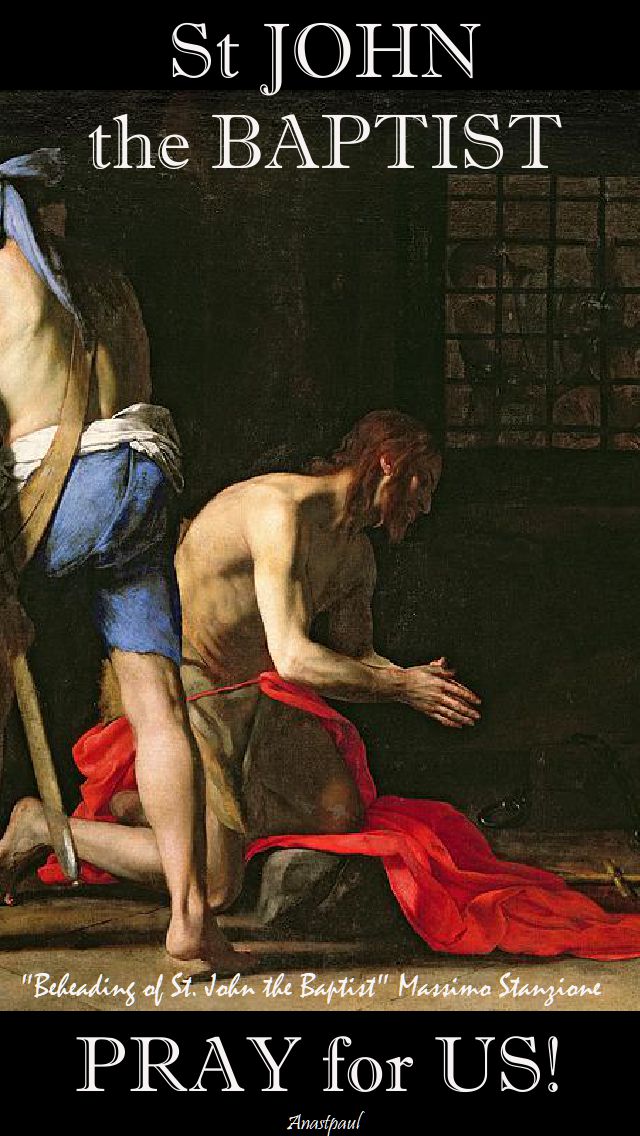 O Christ Jesus, when all is darkness
By St Ignatius Loyola

O Christ Jesus,
when all is darkness
and we feel our weakness
and helplessness,
give us the sense of Your presence,
Your love and Your strength.
Help us to have perfect trust
in Your protecting love
and strengthening power,
so that nothing may frighten or worry us,
for, living close to You,
we shall see Your hand,
Your purpose, Your will through all things.
Amen 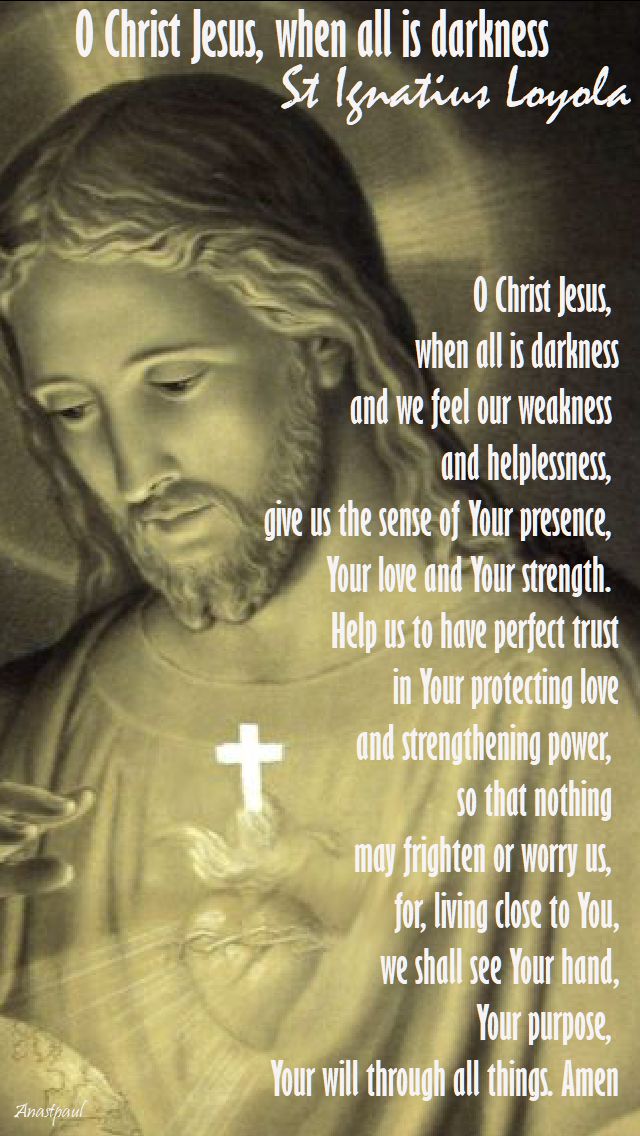 Saint of the Day – The Beheading of St John the Baptist – 29 August (beheaded c 30 at Machaerus)  His was buried at Sebaste, Samaria, though the grave was vandalised.   The remaining relics in Saint Sylvester’s church, Rome, Italy, and at Amiens, France.  The Patronages of St John the Baptist are – against convulsions or spasms, epileptics and against epilepsy, against hail and hailstorms, baptism, bird dealers, converts, convulsive children, cutters, farriers, French Canadians, innkeepers, lambs, monastic life, motorways, printers, tailors, Jordan, Puerto Rico, Knights Hospitaller, Knights of  Malta, 13 dioceses, 69 cities.  Attributes –  cross in hand, lamb, severed head on a platter, skin of an animal, slender cross, tall, thin cross.

In addition to the feast of the nativity of St. John the Baptist (June 24), the Church, since the fourth century, commemorates the martyrdom of Christ’s precursor.   According to the Roman Martyrology, this day marks “the second finding of his most venerable head.” The body of the saint was buried in Samaria.   In the year 362 pagans desecrated the grave and burned his remains.   Only a small portion of his relics were able to be saved by monks and sent to St Athanasius at Alexandria.   The head of the saint is venerated at various places.   That in the Church of St Sylvester in Rome belongs to a martyr priest John.   Also in the Dominican church at Breslau the Baptist’s head is honoured.

“There is no doubt that blessed John suffered imprisonment and chains as a witness to our Redeemer, whose forerunner he was and gave his life for him.   His persecutor had demanded not that he should deny Christ but only that he should keep silent about the truth.   Nevertheless, he died for Christ.   Does Christ not say:  “I am the truth”?  Therefore, because John shed his blood for the truth, he surely died for Christ. 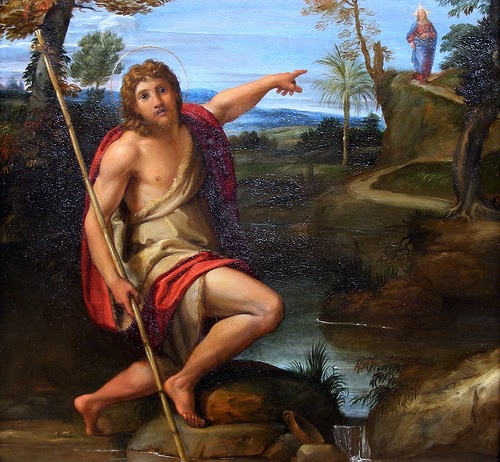 Such was the quality and strength of the man who accepted the end of this present life by shedding his blood after the long imprisonment.   He preached the freedom of heavenly peace, yet was thrown into irons by ungodly men.   He was locked away in the darkness of prison, though he came bearing witness to the Light of life and deserved to be called a bright and shining lamp by that Light itself, which is Christ.

To endure temporal agonies for the sake of the truth was not a heavy burden for such men as John;  rather it was easily borne and even desirable, for he knew eternal joy would be his reward.

Since death was ever near at hand, such men considered it a blessing to embrace it and thus gain the reward of eternal life by acknowledging Christ’s name.   Hence the apostle Paul rightly says:  “You have been granted the privilege not only to believe in Christ but also to suffer for his sake.”  He tells us why it is Christ’s gift that his chosen ones should suffer for him:  “The sufferings of this present time are not worthy to be compared with the glory that is to be revealed in us.”  (Saint Bede the Venerable) 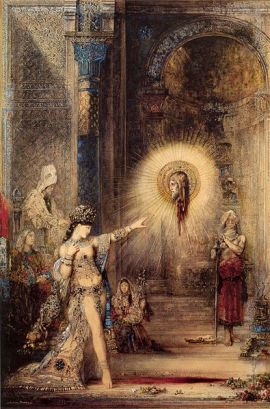 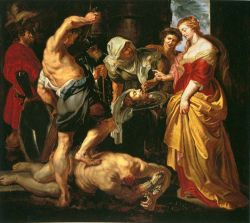 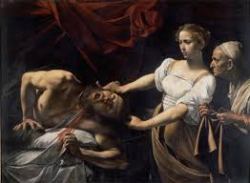 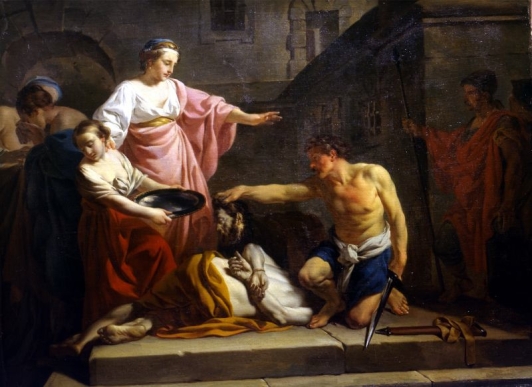 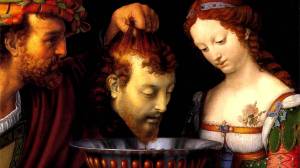 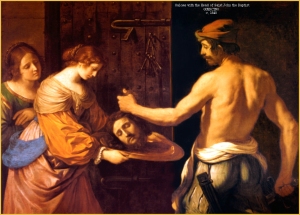 The Beheading/Passion of John the Baptist (Memorial)
—
Our Lady of Tears: On March 8th, 1930, the Virgin appeared to a religious from the Institute of the Missionary Sisters of Jesus Crucified, Amalia Aguirre of the Savior Scourged:  “I was in the chapel when I suddenly felt that I was lifting up. I saw a lady of indescribable beauty approach me.”
She was dressed in a purple dress, a blue cloak and a white veil that covered even the chest.   The Most Holy Virgin, would display a rosary with her tears, for converting sinners. Devotion to this Rosary, was approved by Bishop Francisco Campos Barreto, Bishop of Campinas, who not only allowed the recognition of the events, but he did his utmost to spread everywhere the commemorative medal of Our Lady of Tears, the source of many conversions and graces. 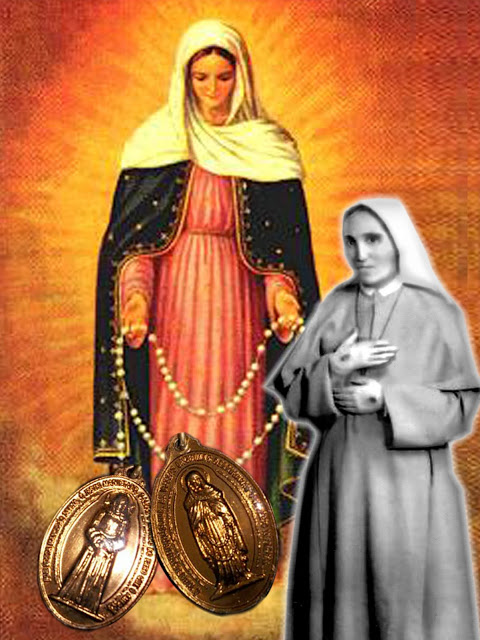 Our Lady of the Guard: In 1214 maître (master) Pierre, a priest of Marseille, was inspired to build a chapel dedicated to the Virgin Mary on the hill known as La Garde, which belonged to the abbey of Saint-Victor.   The abbot granted him permission to plant vines, cultivate a garden and build a chapel.   The chapel, completed four years later, appears in an 18 June 1218 papal bull by Pope Honorius III listing the possessions of the abbey. After maître Pierre died in 1256, Notre-Dame de la Garde became a priory.   The prior of the sanctuary was also one of four claustral priors of Saint-Victor.
From the time the chapel was founded, surviving wills show bequests in its favour.   Also, sailors who survived shipwrecks gave thanks and deposited ex-votos at Notre-Dame of the Sea in the church of Notre-Dame-du-Mont.   Towards the end of the 16th century they began going to Notre-Dame de la Garde instead.
The first chapel was replaced at the beginning of the 15th century by a larger building with a richly equipped chapel dedicated to Saint Gabriel. (https://www.youtube.com/watch?v=Y1c7Lsbtm-4)
—
St Adelphus
St Adausia of Rome
St Alberic of Bagno de Romagna
St Basilia of Sirmium
St Candida of Rome
Bl Dominik Jedrzejewski
Bl Edmund Rice
St Edwold the Hermit
St Eufrasia of the Sacred Heart of Jesus Eluvathingal
St Euthymius of Perugia
Bl Filippa Guidoni
St Jeanne Jugan
Bl John of Perugia
St Louis-Wulphy Huppy
St Maximian of Vercelli
St Medericus
St Nicaeus of Antioch
St Paul of Antioch
Bl Peter of Sassoferrato
St Repositus of Velleianum
Bl Richard Herst
St Sabina of Rome
St Sabina of Troyes
Bl Sancja Szymkowiak
St Sator of Velleianum
St Sebbe of Essex
Bl Teresa Bracco
St Velleicus
St Victor of La Chambon
St Vitalis of Velleianum
—
Martyred in the Spanish Civil War:
Bl Constantino Fernández Álvarez
Bl José Almunia López-Teruel
Bl Josep Maria Tarín Curto
Bl Pedro Asúa Mendía