O Heart of my Saviour
By St John Eudes

O Heart all lovable
and all loving of my Saviour,
be the Heart of my heart,
the soul of my soul,
the spirit of my spirit,
the life of my life
and the sole principle
of all my thoughts, words and actions,
of all the faculties of my soul
and of all my senses,
both interior and exterior.
this day and always. Amen 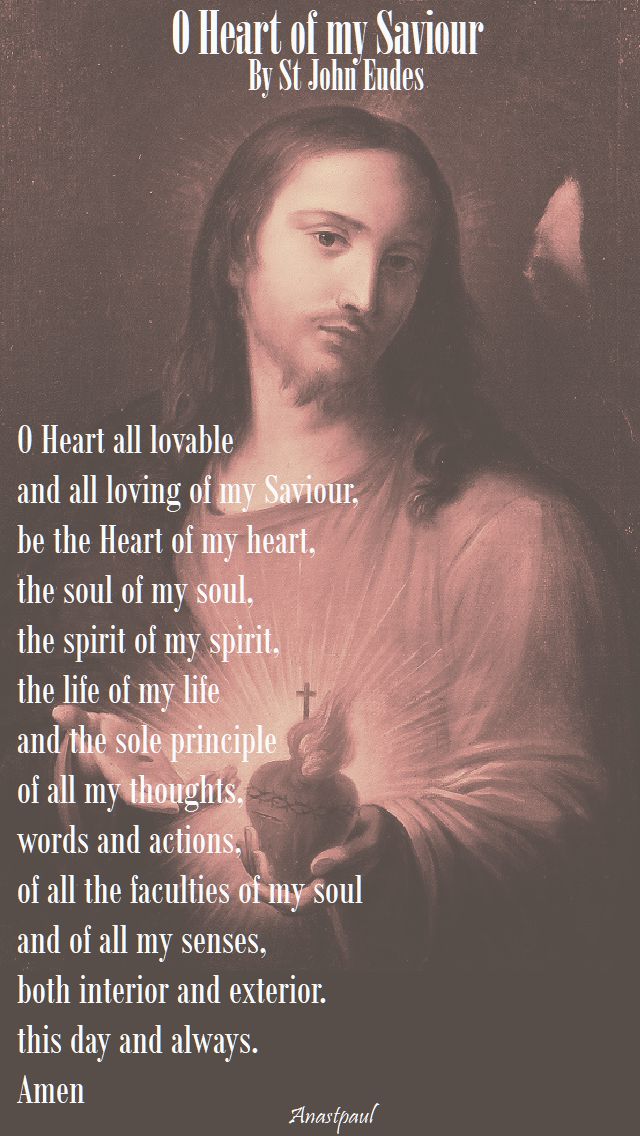 How little we know where God’s grace will lead.   Born on a farm in northern France, John died at 79 in the next “county” or department.   In that time he was a religious, a parish missionary, founder of two religious communities and a great promoter of the devotion to the Sacred Heart and the Immaculate Heart of Mary.
He joined the religious community of the Oratorians and was ordained a priest at 24. During severe plagues in 1627 and 1631, he volunteered to care for the stricken in his own diocese.   Lest he infect his fellow religious, he lived in a huge cask in the middle of a field during the plague.   At age 32, John became a parish missionary.   His gifts as preacher and confessor won him great popularity.   He preached over 100 parish missions, some lasting from several weeks to several months.

Holiness is the wholehearted openness to the love of God.   It is visibly expressed in many ways but the variety of expression has one common quality: concern for the needs of others.   In John’s case, those who were in need were plague-stricken people, ordinary parishioners, those preparing for the priesthood, prostitutes and all Christians called to imitate the love of Jesus and his mother. ( Fr Don Miller OFM)

St John Eudes, Pray for us! 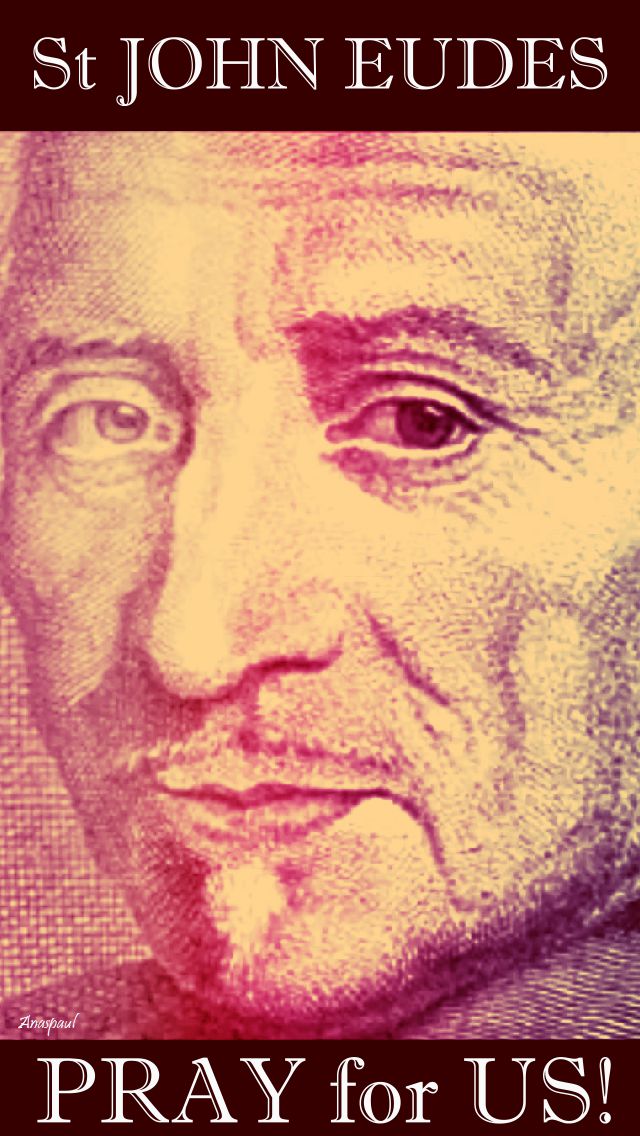 “Faith is a beam, radiating from the face of God.” 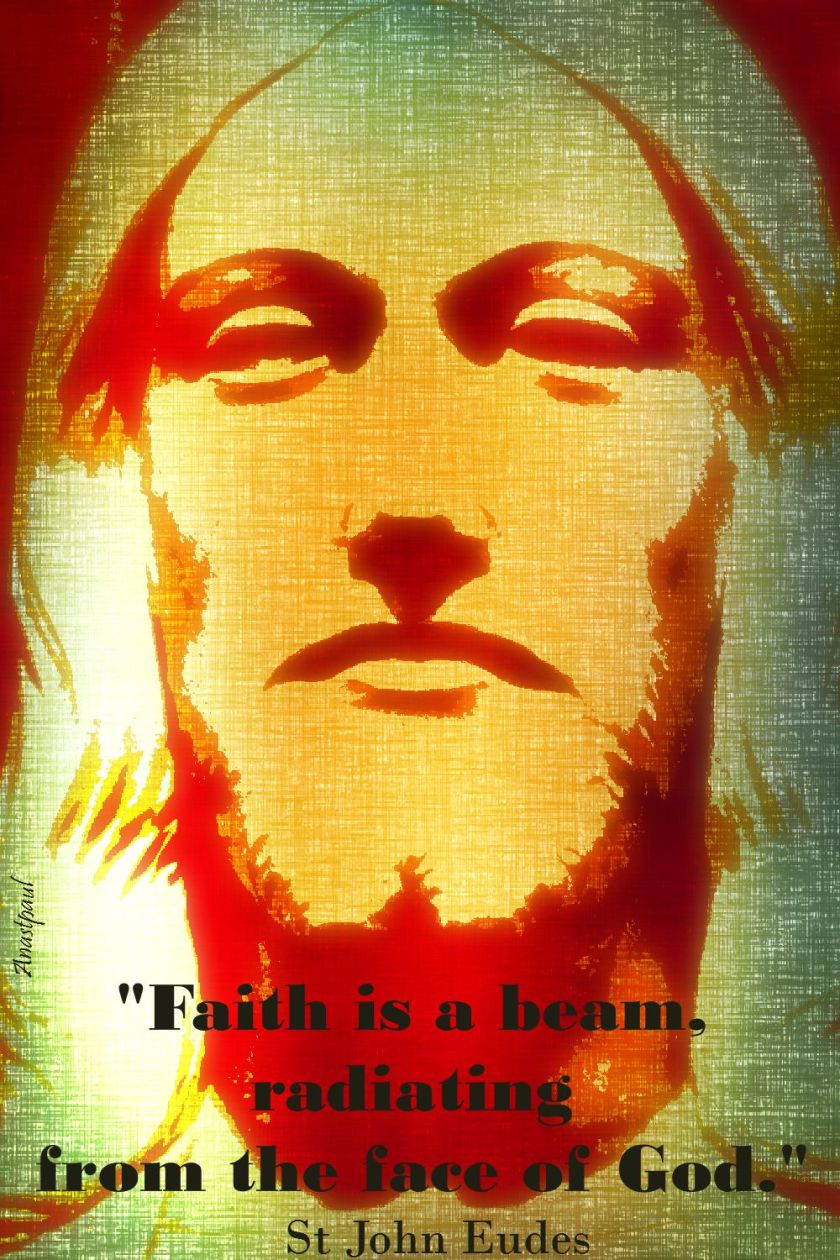 “Our wish, our object, our chief preoccupation
must be to form Jesus in ourselves,
to make His spirit, His devotion, His affections,
His desires and His disposition live and reign there.
All our religious exercises should be directed to this end.
It is the work which God has given us to do unceasingly. “ 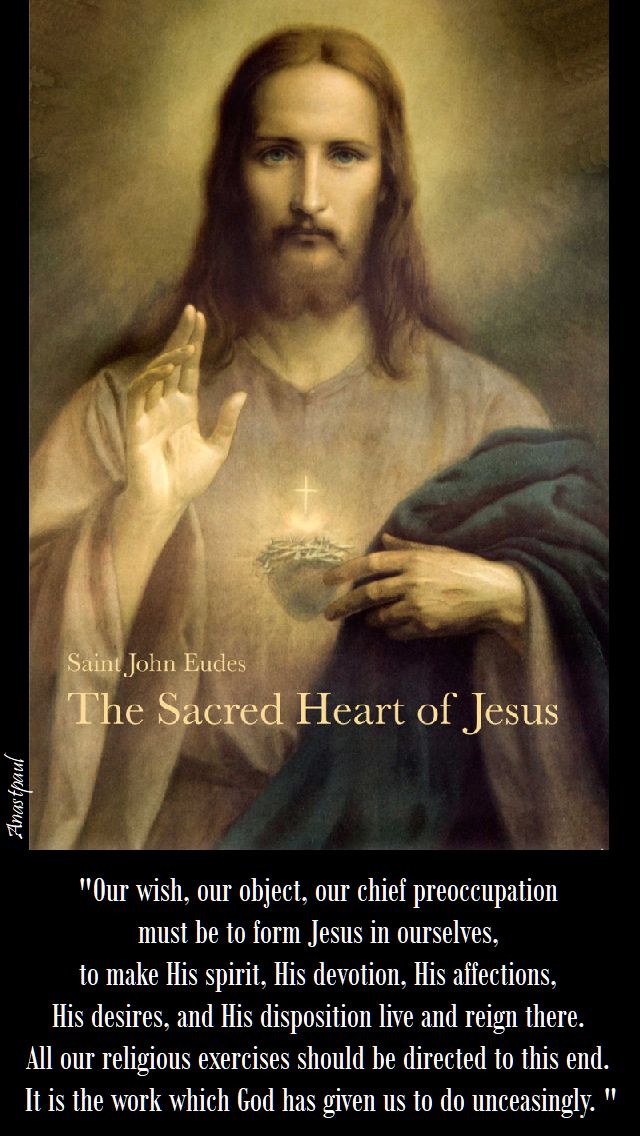 “The Christian life is a continuation
and completion of the life of Christ in us.
We should be so many Christs here on earth,
continuing His life and His works,
labouring and suffering in a holy
and divine manner in the spirit of Jesus.” 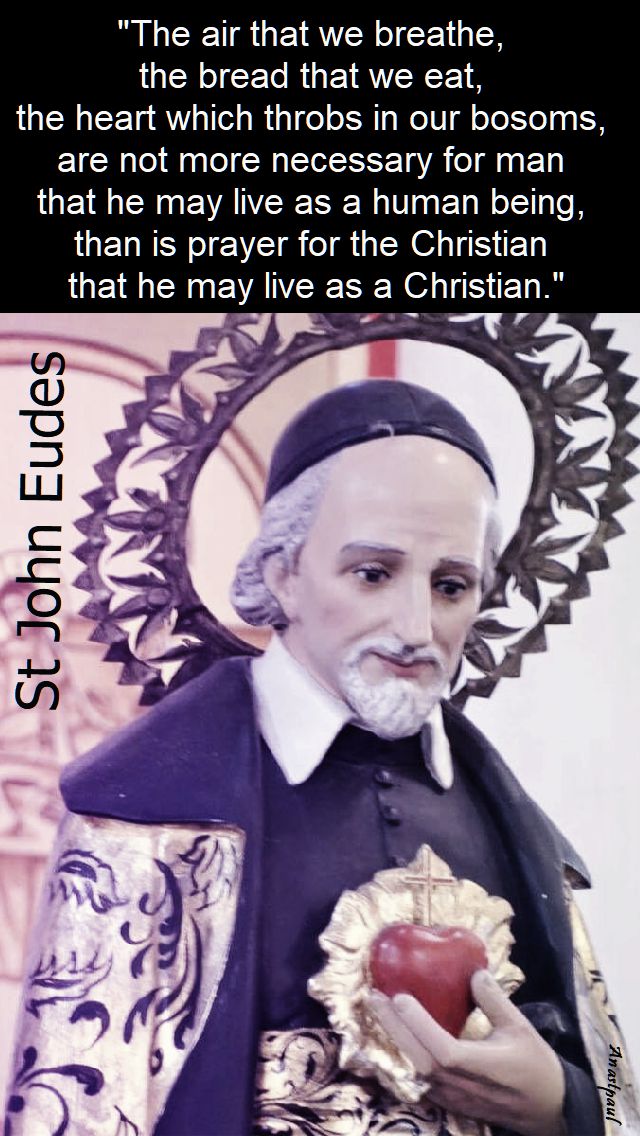 ““If the Church shows respect and veneration for everything
that came in contact with the Saviour’s Body: the Cross,
the Nails, the Thorns, the Winding Sheet of His Sepuchre,
the Swathing-bands of His infancy and similar things – what
honour must be due to this venerable body of the
Blessed Virgin from which the Body of the Redeemer was formed!” 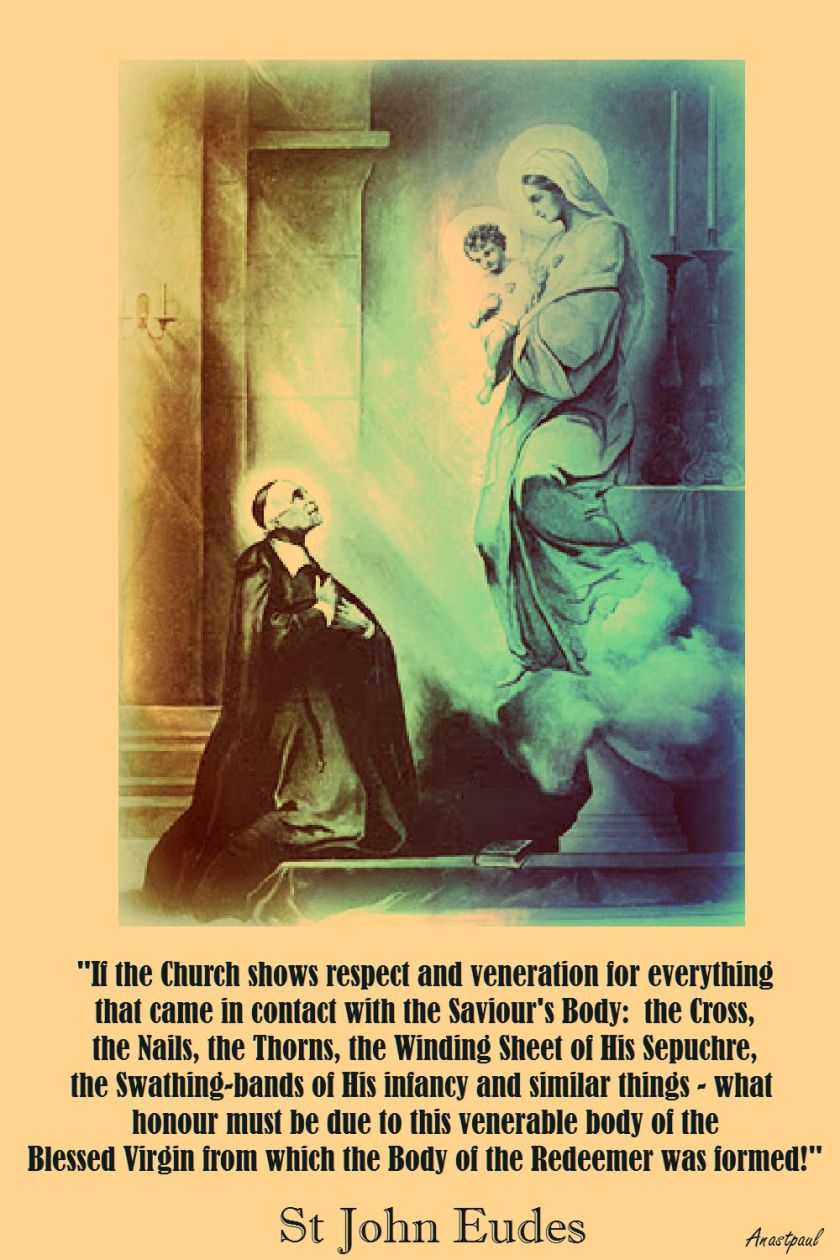 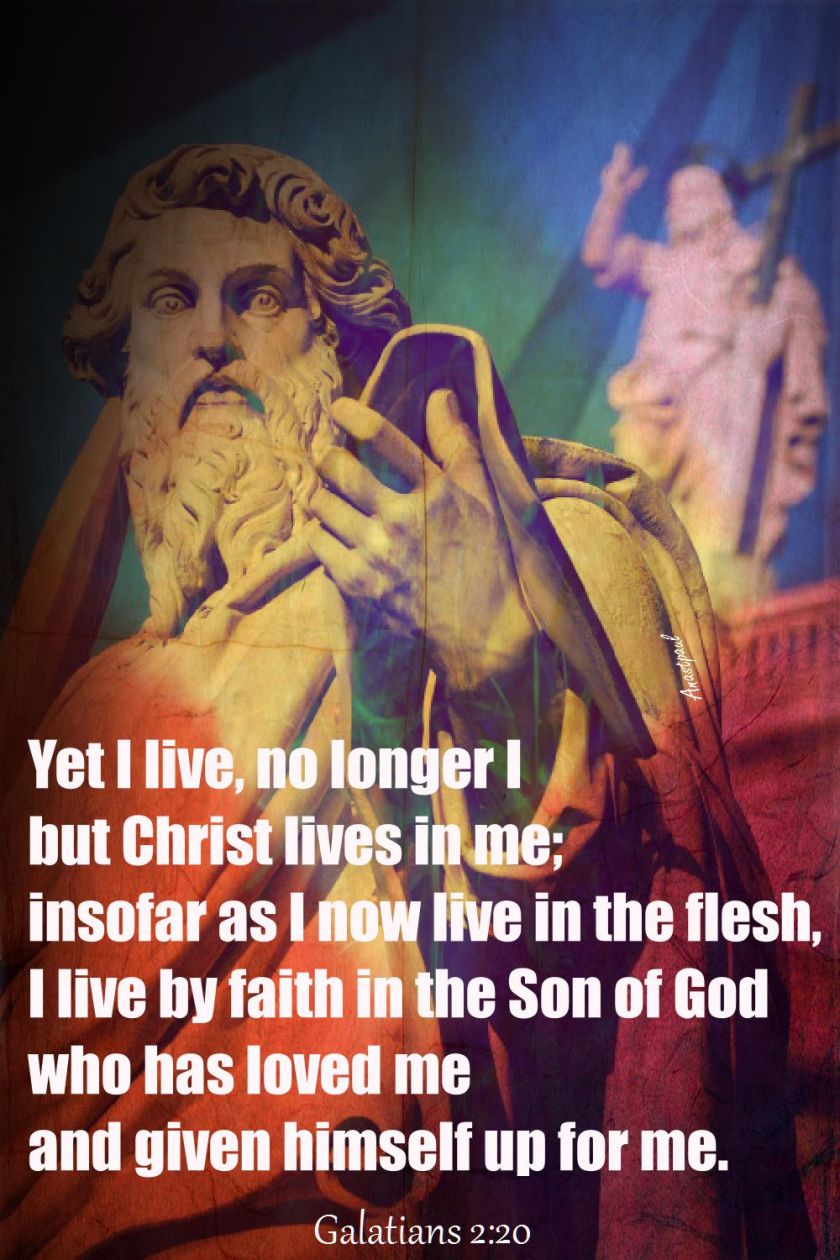 REFLECTION – “A Christian has a union with Jesus Christ:
more noble,
more intimate
and more perfect
than the members of a human body
have with their head!” 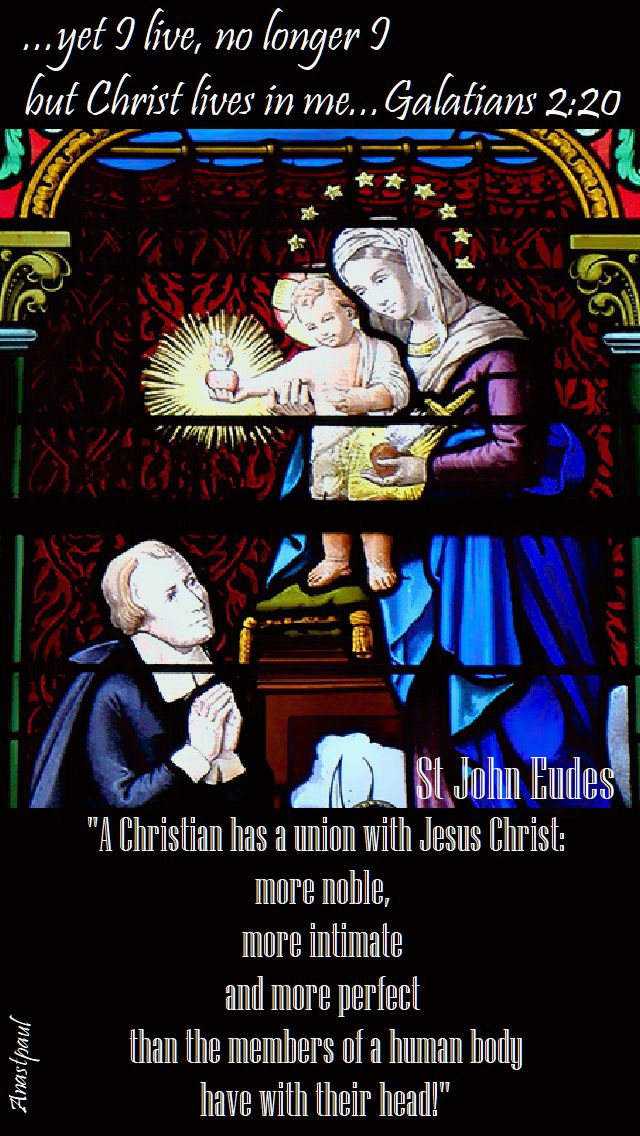 PRAYER – Father of mercies and God of all consolation, You gave us the loving Heart of Your own beloved Son, because of the boundless love by which You have loved us, which no tongue can describe. May we render You a love that is perfect with hearts made one with His. Grant, we pray, that our hearts may be brought to perfect unity: each heart with the other and all hearts with the Heart of Jesus….and may the rightful yearnings of our hearts find fulfillment through Him: Our Lord Jesus Christ, Your Son, who lives and reigns with You in the unity of the Holy Spirit, one God, forever and ever. – Collect from Saint John Eudes’ Mass, Gaudeamus, 1668 St John Eudes, Pray for us! amen. 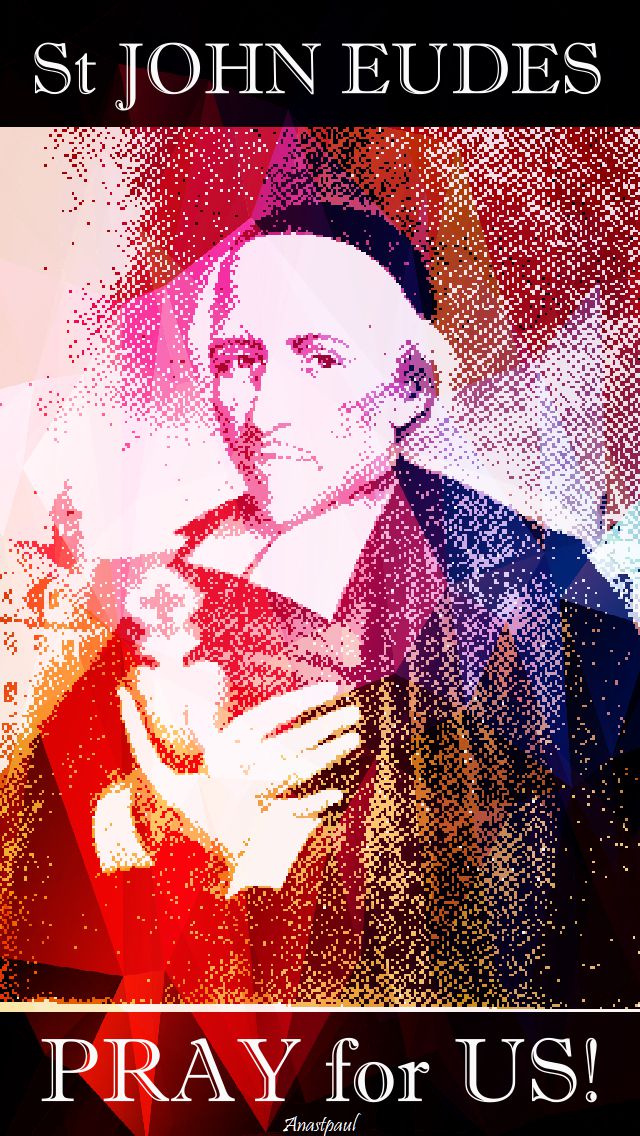 Saint of the Day – 19 August – St John Eudes -(1601-1680 “Apostle of Two Hearts” (14 November 1601 at Ri, Normandy, France – 19 August 1680 at Caen, Normandy, France) –  Beatified on 25 April 1909 by Pope Pius X and Canonised on 31 May 1925 by Pope Pius XI.   Confessor, Priest, Missionary, Founder, Preacher, Writer, he founded the Congregation of Jesus and Mary and the Order of Our Lady of Charity and was the author of the propers for the Mass and Divine Office of the Sacred Hearts of Jesus and Mary.   Patronage – of the Diocese of Baie-Comeau, Québecl.   Attributes – Priest’s garments with the Sacred Heart. 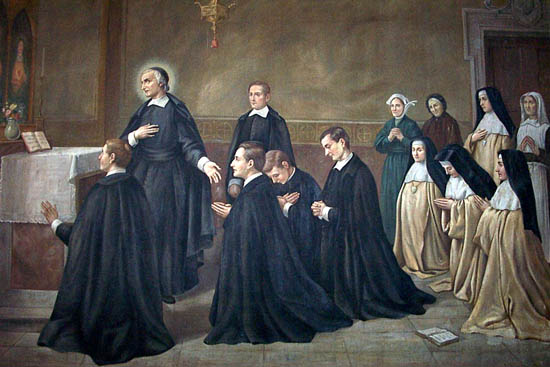 Eudes was born in 1601 on a farm near the village of Ri, in Normandy, the son of Isaac and Martha Eudes.   After studying with the Jesuits at Caen, Eudes joined the Oratorians on 25 March 1623.   His masters and models in the spiritual life were Pierre de Bérulle and the mystic Charles de Condren.   As a student of de Bérulle, Eudes is a member of the French School of Spirituality.   The French School was not a system or philosophy, but a highly Christocentric approach to spirituality, characterized by a sense of adoration, a personal relationship with Jesus, and a rediscovery of the Holy Spirit.

Eudes was ordained a priest on 20 December 1625.   Immediately after his ordination, he came down with an illness that kept him bedridden for a year.   During severe plagues in 1627 and 1631, he volunteered to care for the stricken in his own diocese.   He went about Normandy committing himself to the sick, administering the sacraments, and burying the dead.   To avoid infecting his colleagues, he lived in a huge cask in the middle of a field during the plague.

At age 32, Eudes became a parish missionary, preached over 100 parish missions, throughout Normandy, Ile-de-France, Burgundy and Brittany.   He was called by Jean-Jacques Olier “the Prodigy of his Age”.

He saw that parish priests needed support in becoming men of prayer and action.   He held conferences for them in which he outlined their duties.   Later, John started his own society of priests called the Congregation of Jesus and Mary.   The members were dedicated to promoting good seminary training, which would form Christlike priests. 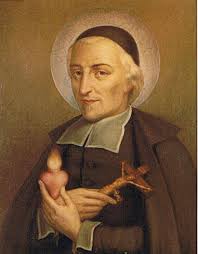 Christian love impelled John to feel compassion for the women who were trying to escape prostitution.   He wanted a place for them to live, a refuge from their former way of life.   To serve the women in these refuges, he established a society of religious women called the Congregation of Our Lady of the Refuge.   It now serves the needs of troubled girls around the world.

Influenced by the teaching of the French school and St. Francis de Sales, especially as set out in the Treatise on the Love of God, and also by the revelations of St. Gertrude and St. Mechtilde, he was the theoretician, so to speak, of devotion to the Sacred Heart and explained the expressions of his predecessors.   Won over to devotion to the Heart of Jesus by Bérulle’s devotion to the Incarnate Word, he combined with it the gentleness and devotional warmth of St. Francis de Sales.   He changed the somewhat individual and private character of the devotion into a devotion for the whole Church by writing for the benefit of his communities an Office and a Mass, which were later approved by several bishops before spreading throughout the Church.   For this reason, Pope Leo XIII, in proclaiming his virtues heroic in 1903, gave him the title of “Author of the Liturgical Worship of the Sacred Heart of Jesus and Holy Heart of Mary”. 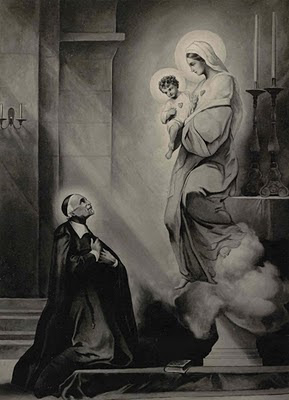 “You must never separate what God has so perfectly united.   So closely are Jesus and Mary bound up with each other that whoever beholds Jesus sees Mary; whoever loves Jesus, loves Mary;  whoever has devotion to Jesus, has devotion to Mary.”

The most striking characteristic of the teaching of St. John Eudes on Devotion to the Sacred Heart—as indeed of his whole teaching on the spiritual life—is that Christ is always its centre. 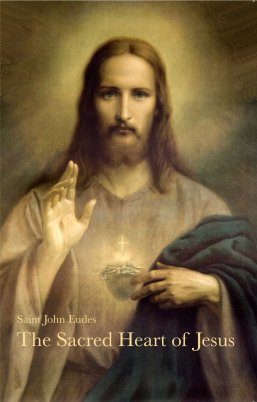 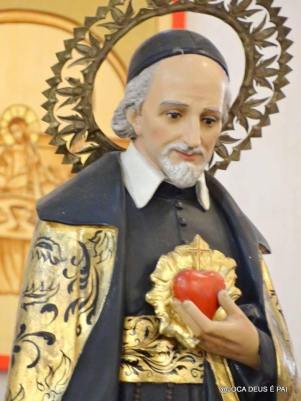 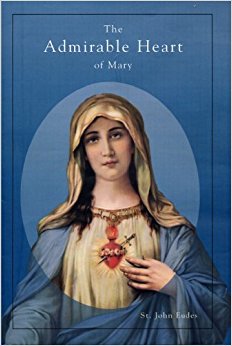 St John died a month after finishing The Admirable Heart of the Most Holy Mother of God, of natural causes on 19 August 1680 at Caen, Normandy, France. 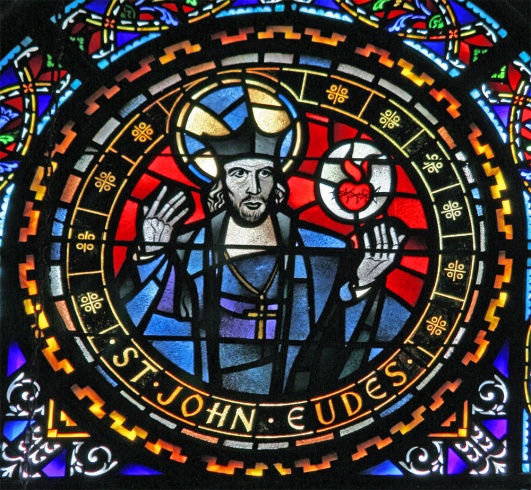 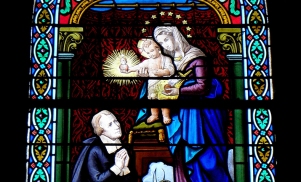 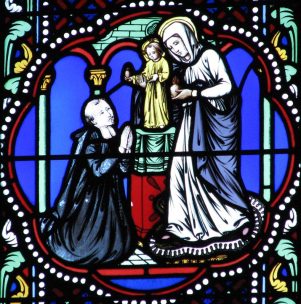