Little Known Fact #2:   While working in a factory during the Nazi Occupation of Poland, Karol Wojtyla heard that one of his co-workers was expecting a child.   The man worked the night shift and found out that his wife gave birth to their child.   After a full day of work during the day, Karol told his co-worker to go home to be with his family. Karol then worked the entire night shift in place of the new father.   He continued to work the night shift after his own shift until his co-worker’s wife regained her strength and he could return to work.

REFLECTION:  ”Follow me! In July 1958 the young priest Karol Wojtyla began a new stage in his journey with the Lord and in the footsteps of the Lord.   Follow me – Karol Wojtyla accepted the appointment, for he heard in the Church’s call the voice of Christ. And then he realised how true are the Lord’s words:  “Those who try to make their life secure will lose it but those who lose their life will keep it” (Lk 17:33).   Our Pope – and we all know this – never wanted to make his own life secure, to keep it for himself;   he wanted to give of himself unreservedly, to the very last moment, for Christ and thus also for us.   And thus he came to experience how everything which he had given over into the Lord’s hands came back to him in a new way.   His love of words, of poetry, of literature, became an essential part of his pastoral mission and gave new vitality, new urgency, new attractiveness to the preaching of the Gospel, even when it is a sign of contradiction.”…Pope Benedict 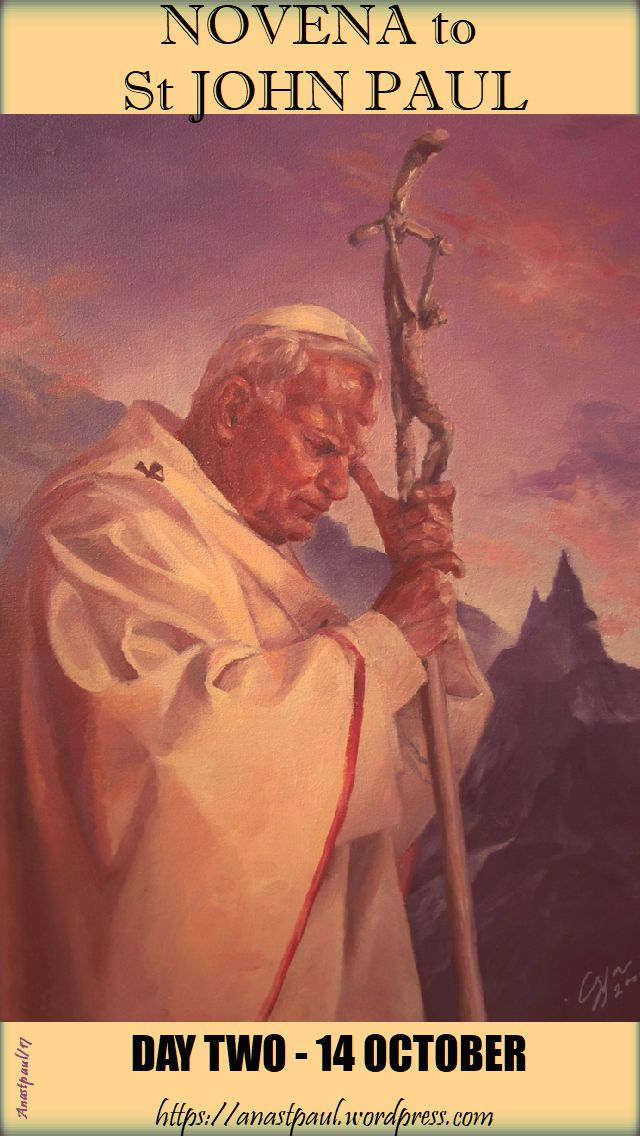 O Holy Trinity, we thank You for having given to the Church Pope John Paul II and for having made him shine with Your fatherly tenderness, the glory of the Cross of Christ and the splendour of the Spirit of love.

Continue, beloved St John Paul, we implore you, to sustain from heaven the faith of God’s people.   We praise and thank You Father that St John Paul has been numbered among Your saints and make our prayer through our Lord Jesus Christ with the Holy Spirit, one God forever.

“Mary is ‘the Mother of the Son of God.
As a result she is also the favourite daughter of the Father
and the temple of the Holy Spirit.
Because of this gift of sublime grace,
she far surpasses all other creatures,
both in heaven and on earth.”
(REDEMPTORIS MATER – 1987)