Thought for the Day – 18 February

Faithful to the promises he made as a Dominican, to preach the Gospel after having contemplated it in prayer, Fra Angelico put his creativity at the disposal of the Lord.   With brush and paint in hand, he used his talents to transmit to all people the sublimity and the redemptive strength of the divine mysteries.

Between 1425 and 1447, Fra Angelico carried out his activity for the Dominican convents and other ecclesiastical institutes at Fiesole, Florence (most especially at the convent of San Marco), Cortona and Orvieto.   The fame of his genius merited him the esteem of the Sovereign Pontiffs Eugenio IV and Nicolas V, who contracted him for the task of frescoing several rooms in the Vatican Palace (1445-49).

Fra Angelico died on February 18, 1455, in the convent of Santa Maria Sopra Minerva in Rome and was buried in the adjoining Basilica, where his body was covered by a simple slab on which was carved his portrait.   With a personality that was uncomplicated and clear, Brother Giovanni had lived a poor and humble life, refusing honours and positions.

The virtue and the profound religious spirit which characterized the life of this artist and Dominican is reflected in his spirituality, his purity and the luminosity of his art.   Even before his official recognition as a blessed of the Church, he had been given by the faithful the title “Beato Angelico.”   In a moving ceremony on October 18, 1984, Pope John Paul II, on his knees in front of Fra Angelico’s tomb, proclaimed him solemnly to be the universal patron of all artists.

The Incarnation was one of Fra Angelico’s favourite themes and he painted over 25 variations of it.   His painted meditations, so needed at the time of the early Renaissance, are still necessary today.   God became man to bring us closer to Himself by way of all things human.   He makes all things new by fashioning them into possible vehicles of grace for us, so that by visible realities and concrete concepts, we can arrive at an understanding and a love of higher, invisible realities, all leading to God Himself.  Without art our lives would be much depleted. L   et us pray for artists today, especially those who can lift our hearts and minds to God that the Lord may come to them and guide their hands.

Blessed Fra Angelico, Pray for us! 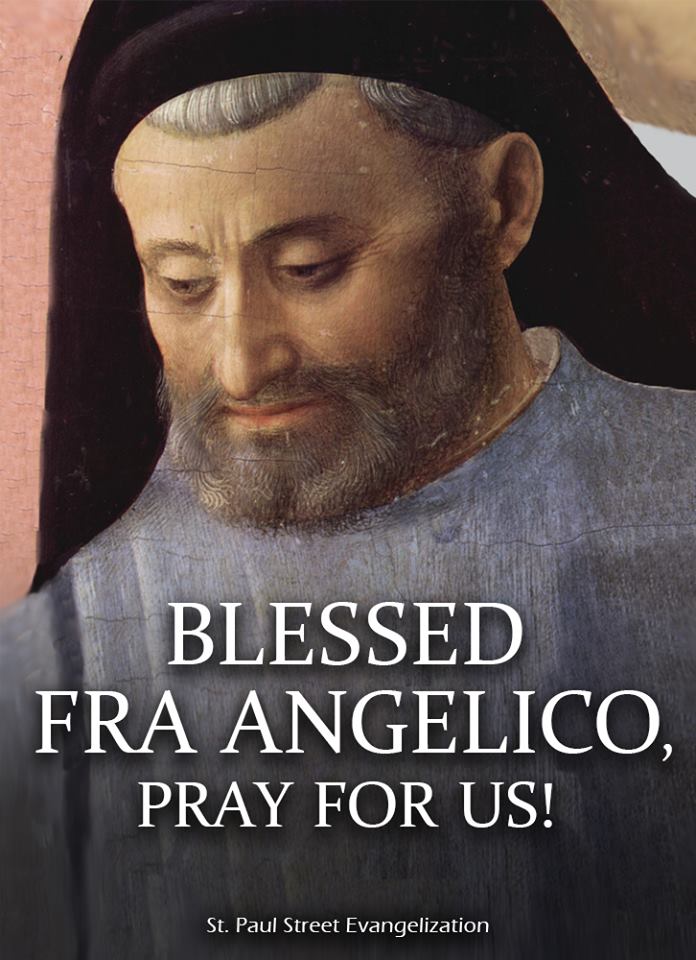