Saint/s of the Day – 20 February – Blessed Francisco (11 June 1908 – 4 April 1919 died aged 10), his sister Jacinta Marto (11 March 1910 – 20 February 1920 died aged 9) and their cousin Lúcia Santos (1907–2005) were children from Aljustrel near Fátima, Portugal, who said they witnessed three apparitions of an angel in 1916 and several apparitions of the Blessed Virgin Mary in 1917.    Mary was given the title Our Lady of Fátima as a result and Fátima became a major centre of world Christian pilgrimage.  Patrons of Bodily ills, captives, people ridiculed for their piety, prisoners, sick people, against sickness. 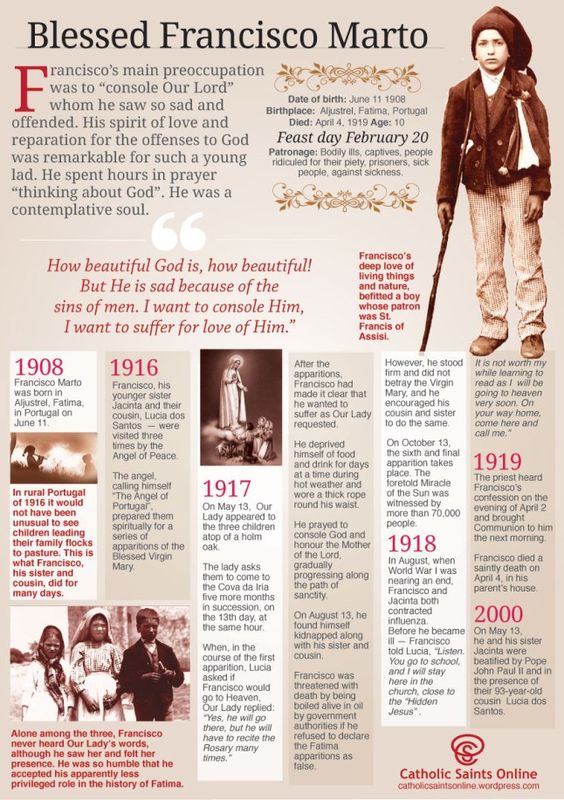 The youngest children of Manuel and Olimpia Marto, Francisco and Jacinta were typical of Portuguese village children of that time.    They were illiterate but had a rich oral tradition.  According to Lúcia’s memoirs, Francisco had a placid disposition, was somewhat musically inclined, and liked to be by himself to think.    Jacinta was affectionate if a bit spoiled.    She had a sweet singing voice and a gift for dancing.    Following their experiences, their fundamental personalities remained the same.    Francisco preferred to pray alone, saying that this would “console Jesus for the sins of the world”.    Jacinta said she was deeply affected by a terrifying vision of Hell shown to the children at the third apparition and deeply convinced of the need to save sinners through penance and sacrifice as the Virgin had told the children to do.    All three children but particularly Francisco and Jacinta, practised stringent self-mortifications to this end.

Apparitions
The brother and sister, who tended to their families’ sheep with their cousin Lucia in the fields of Fatima, Portugal, are said to have witnessed several apparitions of an angel in 1916.    Lucia later recorded the words of several prayers she said they learned from this angel.   Lucia wrote in her memoirs that she and her cousins saw the first apparition of Mary on May 13, 1917.    At the time of the apparition, Francisco was 9 years old and Jacinta was 7.   During the first apparition, Mary is said to have asked the three children to say the Rosary and to make sacrifices, offering them for the conversion of sinners.    She also asked them to return to that spot on the thirteenth of each month for the next six months. 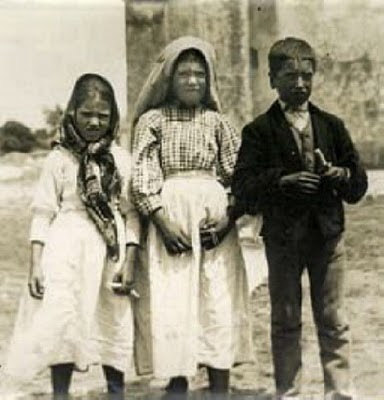 Illness and death
The siblings were victims of the great 1918 influenza epidemic that swept through Europe that year.    In October 1918, Mary appeared and said she would take them to heaven soon.  Both lingered for many months, insisting on walking to church to make Eucharistic devotions and prostrating themselves to pray for hours, kneeling with their heads on the ground as they said the angel had instructed them to do.   Francisco declined hospital treatment on April 3, 1919 and died at home the next day.    Jacinta was moved from one hospital to another in an attempt to save her life, which she insisted was futile.   She developed purulent pleurisy and endured an operation in which two of her ribs were removed.    Because of the condition of her heart, she could not be fully anesthetized only local and later suffered terrible pain, which she said would help to convert many sinners. On February 19, 1920, Jacinta asked the hospital chaplain who heard her confession to bring her Holy Communion and administer Extreme Unction because she was going to die “the next night”.    He told her that her condition was not that serious and that he would return the next day.    The next day Jacinta was dead; she had died, as she had often said she would, alone.   In 1920, shortly before her death at age nine, Jacinta Marto reportedly discussed the Alliance of the Hearts of Jesus and Mary with a then 12-year-old Lúcia Santos and said:

Jacinta and Francisco are both buried at the Our Lady of Fátima Basilica.

Beatification
The cause for the siblings’ canonisation began in 1946.    Exhumed in 1935 and again in 1951, Jacinta’s face was found incorrupt;   Francisco’s had decomposed.

In 1937 Pope Pius XI decided that causes for minors should not be accepted as they could not fully understand heroic virtue or practice it repeatedly, both of which are essential for canonisation.    For the next four decades, no sainthood processes for children were pursued.    In 1979 the bishop of Leiria-Fatima asked all the world’s bishops to write to the Pope, petitioning him to make an exception for Francisco, who had died at age 10 and Jacinta, who had died at age 9.    More than 300 bishops sent letters to the Pope, writing that “the children were known, admired and attracted people to the way of sanctity. Favours were received through their intercession.”    The bishops also said that the children’s canonization was a pastoral necessity for the children and teenagers of the day.  In 1979 the Congregation for the Causes of Saints convened a general assembly.  Cardinals, bishops, theologians and other experts debated whether it was possible for children to display heroic virtue.    Eventually, they decided that, like the very few children who have a genius for music or mathematics, “in some supernatural way, some children could be spiritual prodigies.”  They were declared venerable by Pope John Paul II in 1989.   On May 13, 2000, they were declared “blessed” in a decree from the Congregation for the Causes of Saints.    Jacinta is the youngest non-martyred child ever to be beatified.

In her biography of Jacinta, Lúcia said that Jacinta had told her of having had many personal visions outside of the Marian visitations;   one involved a pope who prayed alone in a room while people outside shouted ugly things and threw rocks through the window. At another time, Jacinta said she saw a pope who had gathered a huge number of people together to pray to the Immaculate Heart of Mary.

When Pope John Paul II arrived in Fatima for the first time, in 1982, he said that he had come “because, on this exact date last year in St. Peter’s Square, in Rome, there was an attempt on the life of your Pope, which mysteriously coincided with the anniversary of the first vision at Fatima, that of 13 May 1917. The coincidence of these dates was so great that it seemed to be a special invitation for me to come here.”

Sister Lúcia, when questioned about the Third Secret, said that the three of them had been very sad about the suffering of a Pope and that Jacinta kept saying:  Coitadinho do Santo Padre, tenho muita pena dos pecadores! (“Poor Holy Father, I feel a lot of pity for the sinners!”)   Another miracle was found to have been attributed to their intercession and the process that investigated the miracle was validated on 8 February 2013. Reports indicate the canonisation could occur on the centenary of the apparitions in 2017, together with Lúcia. 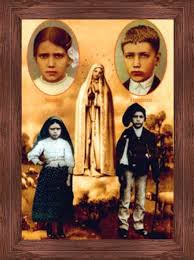