Called the “Apostle of Poland” and the “Apostle of the North”, Hyacinth was the son of Eustachius Konski of the noble family of Odrowąż.   He was born in 1185 at the castle of Lanka, at Kamin, in Silesia, Poland.   A near relative of Blessed Ceslaus, he made his studies at Kraków, Prague and Bologna and at the latter place merited the title of Doctor of Law and Divinity.   On his return to Poland he was given a stipend at Sandomir.   He subsequently accompanied his uncle Ivo Konski, the Bishop of Kraków, to Rome.

While in Rome, he witnessed a miracle performed by Saint Dominic and became a Dominican friar, along with the Blessed Ceslaus and two attendants of the Bishop of Kraków – Herman and Henry.   In 1219 Pope Honorius III invited Saint Dominic and his followers to take up residence at the ancient Roman basilica of Santa Sabina, which they did by early 1220.   Before that time, the friars had only a temporary residence in Rome at the convent of San Sisto Vecchio which Honorius III had given to Dominic circa 1218, intending it to be used for a reformation of Roman nuns under Dominic’s guidance. Hyacinth and his companions were among the first to enter the convent.   They were also the first alumni of the studium of the Dominican Order at Santa Sabina out of which would grow the 16th century College of Saint Thomas at Santa Maria sopra Minerva, which became the Pontifical University of Saint Thomas Aquinas, Angelicum in the 20th century.   After an abbreviated novitiate, Hyacinth and his companions received the religious habit of the Order from St Dominic himself in 1220. 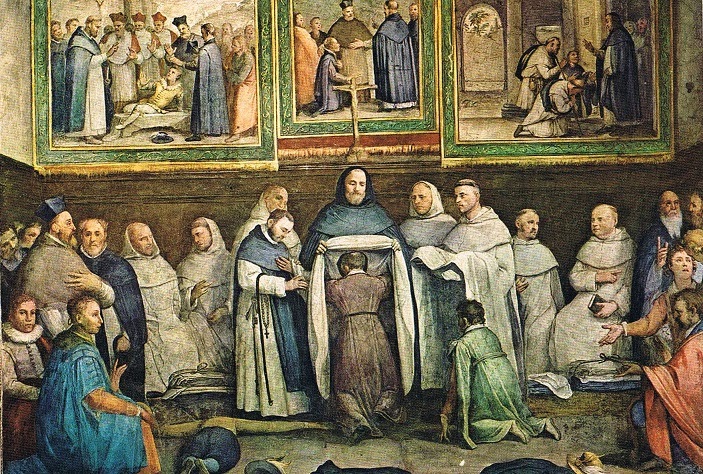 The young friars were then sent back to their homeland to establish the Dominican Order in Poland and Kiev.   As Hyacinth and his three companions travelled back to Kraków, he set up new monasteries with his companions as superiors, until finally he was the only one left to continue on to Kraków, where he founded two houses.

His apostolic journeys extended over numerous and vast regions, he walked a total of nearly twenty five thousand miles in his apostolic travels.   Austria, Bohemia, Livonia, the shores of the Black Sea, Tartary, Northern China in the east, Sweden, Norway and Denmark to the west, were evangelised by him and he is said to have visited Scotland.   Everywhere he travelled unarmed, without a horse, with no money, no interpreters, no furs in the severe winters and often without a guide, abandoning to Divine Providence his mission in its entirety.   Everywhere multitudes were converted, churches and convents were built;  one hundred and twenty thousand pagans and infidels were baptised by his hands.   He worked many miracles;  at Krakow he raised a dead youth to life.  His progress among these hostile peoples, with their barbarous customs and unknown languages, through trackless forests, in the fierce cold of the North, can be explained as a miracle. 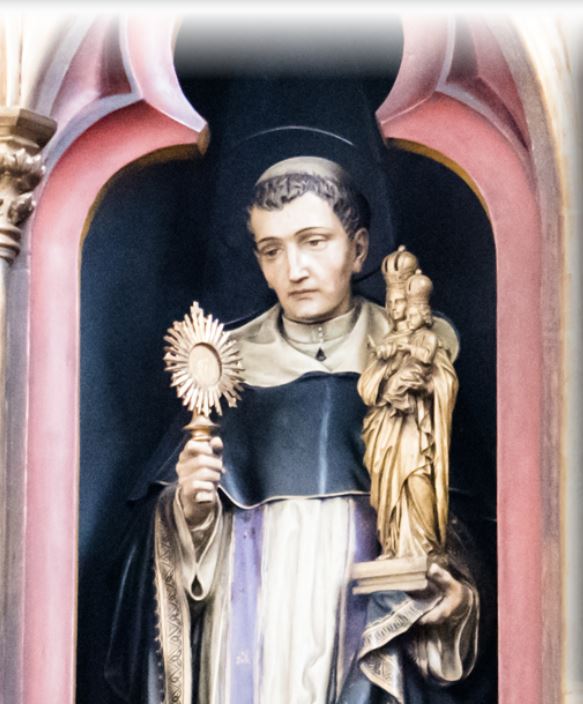 He had inherited from Saint Dominic a perfect filial confidence in the Mother of God;  to Her he ascribed his success and to Her aid he looked for his own salvation.   Early in his mission career, Our Lady appeared to Hyacinth and promised him that she would never refuse him anything.   Through the years of his arduous labour she kept her promise, and his ministry was rich with a harvest of souls. He performed many astounding miracles, including countless cures. On one occasion he gave sight to two boys who had been born without eyes. He raised several dead people to life.   The best known incident in his life has to do with Our Lady, which is not surprising.

It was at the request of this indefatigable missionary that Saint Thomas Aquinas wrote his famous philosophical Summa contra Gentiles, proving the reasonableness of the Faith on behalf of those unfamiliar with doctrine.

While Saint Hyacinth was at Kiev the Tartars sacked the town but it was only as he finished Mass that the Saint heard of the danger.   Without waiting to unvest, he took the ciborium in his hands and was leaving the church.   Then occurred the most famous of his countless prodigies.   As he passed by a statue of Mary a voice said:  “Hyacinth, My son, why do you leave Me behind? Take Me with you…”   The statue was of heavy alabaster but when Hyacinth took it in his arms it was light as a reed.   With the Blessed Sacrament and the statue he walked to the Dnieper river and crossed dry-shod over the surface of the waters to the far bank. 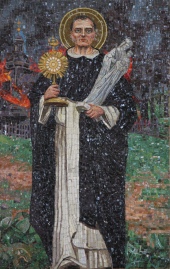 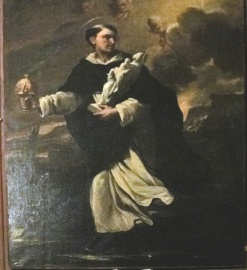 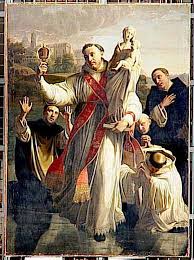 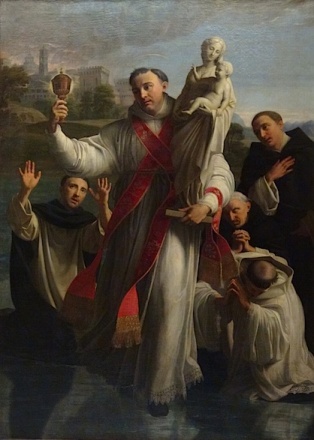 On the eve of the Assumption, 1257, he was advised of his coming death.   In spite of an unrelenting fever, he celebrated Mass on the feast day and communicated as a dying man.   He was anointed at the foot of altar and died on the great Feast of Our Lady.

In the first place he is called “Hyacinth,” because the flower has a stalk with a crimson blossom:   this suits Blessed Jacek well for he was a simple stalk in his docility of heart, a flower in his chastity, a crimson blossom in his vow of poverty and lack of material goods.

Secondly, he is called “Hyacinth” from the hyacinth stone, for he shines brilliantly in the way he handed on the teaching of the gospel, was resplendent in his holy way of life and most steadfast in spreading the catholic faith.