Saint of the Day – 21 October – Blessed Karl/Charles of Austria (1887 – 1922) Emperor of Austria, King of Hungary, Bohemia, Dalmatia and Croatia, Layman, devotee of the Sacred Heart and of the Holy Eucharist, Peacemaker, Social Reformer – born Karl Franz Joseph Ludwig Hubert Georg Otto Maria on 17 August 1887 in Persenbeug Castle, Melk, Lower Austria and died on 1 April 1922 at Funchal, Madeira, Portugal of pneumonia.   Patronages – Marriage, Married couples, Family life, “League of Prayer of the Emperor Charles for the peace of the peoples”.   His body is incorrupt.   Blessed Karl’s wife Zita, is recognised by the Church as a Servant of God. 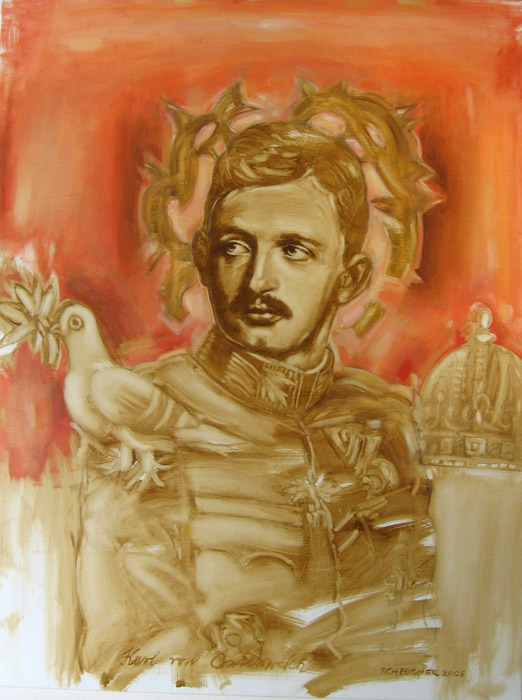 Blessed Karl of Austria was born 0n 17 August 1887, in the Castle of Persenbeug in the region of Lower Austria.   His parents were the Archduke Otto and Princess Maria Josephine of Saxony, daughter of the last King of Saxony. Emperor Francis Joseph I was Karl’s Great Uncle.

Karl was given an expressly Catholic education and the prayers of a group of persons accompanied him from childhood, since a stigmatic nun prophesied that he would undergo great suffering and attacks would be made against him.   That is how the “League of Prayer of the Emperor Charles for the peace of the peoples” originated after his death.   In 1963 it became a prayer community ecclesiastically recognised.

A deep devotion to the Holy Eucharist and to the Sacred Heart of Jesus began to grow in Karl.   He turned to prayer before making any important decisions.

On 21 October,1911, he married Princess Zita of Bourbon and Parma.   Addressing Empress Zita on 22 October 1911, the day after their wedding, Blessed Karl said “Now, we must help each other to get to Heaven.”  The couple was blessed with eight children during the ten years of their happy and exemplary married life.   Karl still declared to Zita on his deathbed:  “I’ll love you forever.”

He became heir to the throne of the Austro‑Hungarian Empire on 28 June 1914, following the assassination of the Archduke Francis Ferdinand.

World War I was underway and with the death of the Emperor Francis Joseph, on 21 November 1916 Karl became Emperor of Austria.   On 30 December he was crowned apostolic King of Hungary.

Karl envisaged this office also as a way to follow Christ – in the love and care of the peoples entrusted to him and in dedicating his life to them.

He placed the most sacred duty of a king – a commitment to peace – at the centre of his preoccupations during the course of the terrible war.   He was the only one among political leaders to support Benedict XV’s peace efforts.

As far as domestic politics are concerned, despite the extremely difficult times he initiated wide and exemplary social legislation, inspired by social Christian teaching.

Thanks to his conduct, the transition to a new order at the end of the conflict was made possible without a civil war.   He was, however, banished from his country.

The Pope feared the rise of communist power in central Europe and expressed the wish that Karlre‑establish the authority of his government in Hungary.   But two attempts failed, since above all Karl wished to avoid the outbreak of a civil war.

He was exiled to the island of Madeira.   Since he considered his duty as a mandate from God, he could not abdicate his office.

Reduced to poverty, he lived with his family in a very humble house.   He then fell fatally ill and accepted this as a sacrifice for the peace and unity of his peoples.

Karl endured his suffering without complaining.  He forgave all those who conspired against him and died on 11Apri 1922 with his eyes turned toward the Holy Sacrament. On his deathbed he repeated the motto of his life:  “I strive always in all things to understand as clearly as possible and follow the will of God and this in the most perfect way”.

His remains except for his heart are still on the island, resting in state in a chapel devoted to the Emperor in the Church of Our Lady of Monte in spite of several attempts to move them to the Habsburg Crypt in Vienna.   His heart and the heart of his wife are entombed in Muri Abbey, Switzerland.

From the beginning, Emperor Charles conceived of his office as a holy service to his people.   His chief concern was to follow the Christian vocation to holiness also in his political actions.   For this reason, his thoughts turned to social assistance.

The cause or campaign for his canonisation began in 1949, when the testimony of his holiness was collected in the Archdiocese of Vienna.   In 1954, the cause was opened and he was declared “servant of God”, the first step in the process.   At the beginning of the cause for canonisation in 1972 his tomb was opened and his body was discovered to be incorrupt.

On 3 October 2004, he was Beatified by St Pope John Paul II.   The Pope also declared 21 October, the date of Charles’ marriage in 1911 to Princess Zita, as Charles’ feast day.

The League of Prayers (join here:  http://www.emperorcharles.org/welcome) established for the promotion of his cause has set up a website and Cardinal Christoph Schönborn of Vienna has sponsored the cause. 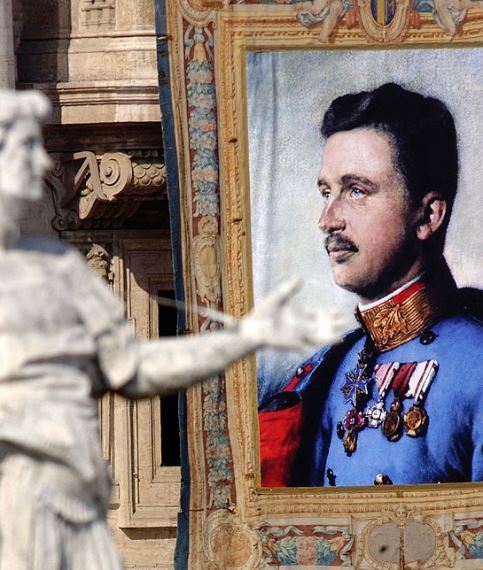 “The decisive task of Christians consists in seeking, recognising and following God’s will in all things. The Christian statesman, Karl of Austria, confronted this challenge every day. To his eyes, war appeared as “something appalling”. Amid the tumult of the First World War, he strove to promote the peace initiative of my Predecessor, Benedict XV.

From the beginning, the Emperor Charles conceived of his office as a holy service to his people. His chief concern was to follow the Christian vocation to holiness also in his political actions. For this reason, his thoughts turned to social assistance. May he be an example for all of us, especially for those who have political responsibilities in Europe today!”

Audience with the members of the Emperor Karl League for Prayers for Peace Among Nations , 14.10.2017

Address of the Holy Father

With affection I greet you and all the members of the Emperor Karl League for Prayers for Peace Among Nations. I thank the president, Msgr Fernand Franck, for his words.   Your annual assembly in Rome takes place in the context of the centenary of the initiative for peace undertaken by Pope Benedict XV and, among political leaders, supported only by Blessed Emperor Karl, with the strong desire to bring an end to the slaughter of the First World War.

The three aims of the League for Prayers underlined by your president – to seek and observe God’s will, to be committed to promoting peace and justice, to atone for the injustice of history – were, so to say, the recurrent motif of the life of Blessed Karl as a statesman, as a husband and father, and as a son of the Church.   Delivering himself to God’s will, he accepted suffering and offered his own life as a sacrifice for peace, always sustained by the love and faithfulness of his wife, Servant of God Zita.

The challenges of our time require the collaboration of all men of good will and, in particular, prayer and sacrifice.   I invite you, therefore, to keep your promise to take part, with prayer and personal commitment, in the many efforts of the Pope in favour of peace.  Without the support of the prayer of the faithful, Peter’s Successor cannot fulfil his mission in the world.   I count on you to.   I entrust you to the maternal protection of Mary Most Holy and to the intercession of Blessed Emperor Karl, and heartily impart my apostolic blessing to you and your loved ones.