One needn’t live a long life to leave a deep imprint.   Teresa of Los Andes is proof of that.

As a young girl growing up in the early 1900’s in Santiago, Chile, Juana Fernandez read an autobiography of a French-born saint—Thérèse, popularly known as the Little Flower. The experience deepened her desire to serve God and clarified the path she would follow.   She became a Carmelite nun, taking the name of Teresa.

The convent offered the simple lifestyle Teresa desired and the joy of living in a community of women completely devoted to God  . She focused her days on prayer and sacrifice. “I am God’s,” she wrote in her diary.    “He created me and is my beginning and my end.”

Toward the end of her short life, Teresa began an apostolate of letter-writing, sharing her thoughts on the spiritual life with many people.   At age 20, she contracted typhus and quickly took her final vows.   She died a short time later, during Holy Week.

Known as the “Flower of the Andes,” Teresa remains popular with the estimated 100,000 pilgrims who visit her shrine in Los Andes each year.   Canonised in 1993 by St Pope John Paul II, she is Chile’s first saint.

The special graces given Saint Teresa reflect the mysterious wisdom of God at work in individuals whether young or old.   It appears, God has His own logic when it comes to who gets what in the realm of grace.   All we can say is, “Praised be the Lord.”

“How I would have loved, mother dear, to be by your side to console and weep with you. But our souls met by the tabernacle.   He leaves His angels and millions of people, to come into your soul, to consummate in you the most intimate union, to transform you into God, to nourish in you the life of grace with which you will attain heaven.”  … from the letters of Saint Terese de los Andes 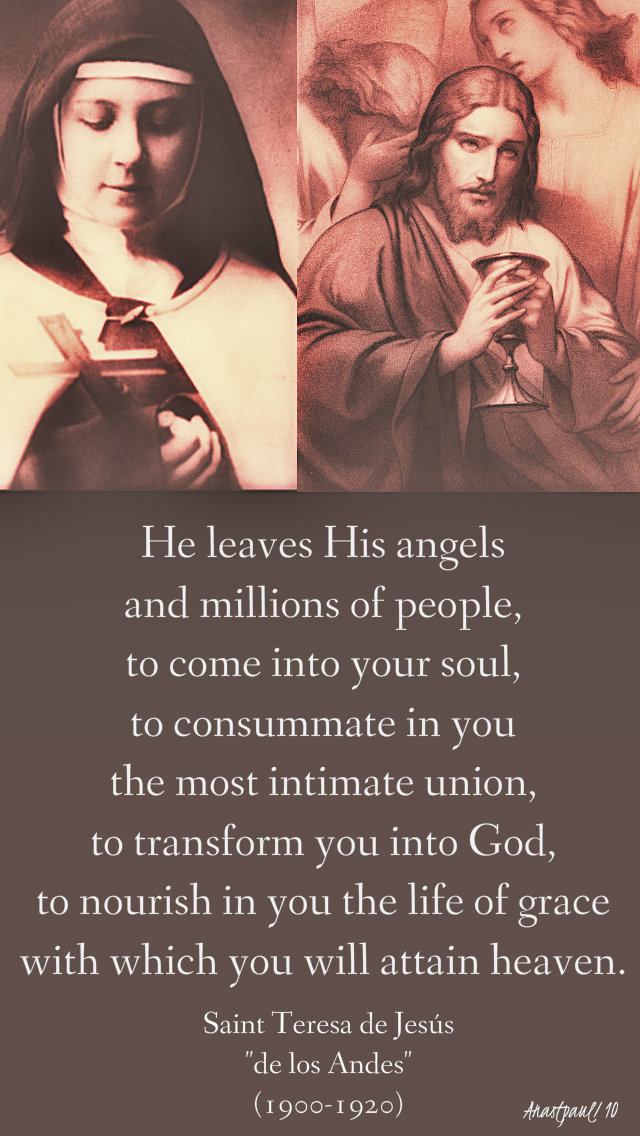