He once described himself as “a little like Jacob, always on a journey,” always seeking. But, in truth, it was there from the beginning―the great love and the driving passion of his life:  Jesus Christ in the Eucharist.

One day, young Peter Julian Eymard [pronounced A-mard], just five years of age, wandered off from the family home.   His sister and half-sister searched frantically for the boy and finally located him in the parish church, standing on a stool close to the tabernacle of the high altar.   In response to their anxious questioning, he answered simply, “I am here listening to Jesus.”

Like all of us, Peter Julian Eymard was conditioned by his familial and cultural background as well as by the social and political milieu of his time.

Life in France during the first half of the nineteenth century was difficult.   Years earlier, the French Revolution had radically altered the political, social and religious landscape of the country.   As a teenager, Eymard would experience the Industrial Revolution which swept across Europe.   As a young man, he witnessed the dawning of the Age of Romanticism in art, music, and literature.

Peter Julian’s road to the priesthood, as well as his life as a priest, was shadowed by the cross.   An intransigent anti-clericalism marked French society and his father, having seen several sons die, did not want his only surviving son to become a priest.   His first attempt to pursue the priesthood ended in serious illness.   Following his father’s death, he tried once again and on July 20, 1834, at age 23, was ordained a priest of the Diocese of Grenoble.

The church of Eymard’s day was greatly affected by Jansenism, a religious movement which focused on the gravity of human sinfulness and a corresponding belief in the unworthiness of human motivation and activity.   Thus, in his seminary years and first years of ministry, Father Peter Julian Eymard  was influenced by a predominantly reparation spirituality.   He would struggle his whole life to seek that inner perfection that would enable him to offer the gift of his entire self.

Perhaps it was the intensification of this spiritual struggle along with his lifelong devotion to Mary that led him to enter religious life.   On August 20, 1839, Father Eymard professed vows as a member of the Society of Mary (the Marists). 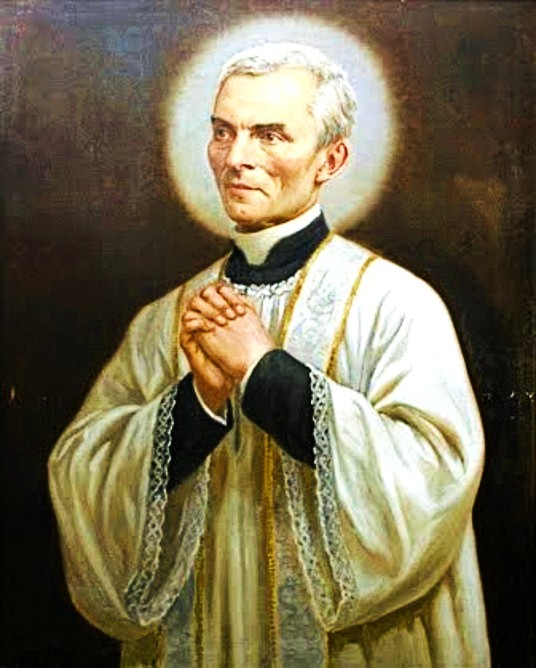 Throughout his life, Peter Julian had an intense devotion to Mary, the Mother of God.   He knew about the apparition of Our Lady of La Salette and enjoyed traveling to various Marian shrines.   It was Father Eymard’s apostolic work for the Society of Mary that would put him in contact with the various currents of eucharistic piety that were flowing through the French church and elsewhere in Europe.

Despite persistent health issues, Peter Julian was an amazingly energetic and hardworking priest and religious.   Naturally drawn to contemplation, the demands of his ministry, especially his preaching schedule and the various administrative duties assigned to him, made it impossible for him to live a purely contemplative life.   He was an outstanding organiser of lay societies, a zealous educator, a well-prepared preacher and something of a prophetic figure in his Marist community and even to his superiors.

Father Eymard was especially effective at preaching eucharistic devotions, very popular at the time.   It was on one such occasion, on Corpus Christi, May 25, 1845, that he had a powerful experience that would change the course of his life. While carrying the Blessed Sacrament in procession at Saint Paul’s Church in Lyons, he felt an intense attraction to Christ in the Eucharist and resolved to “bring all the world to the knowledge and love of our Lord;  to preach nothing but Jesus Christ and Jesus Christ eucharistic.”

This grace would gradually consume his life and his energies over the next several years. When responsibility for writing a rule for the new Third Order of Mary was entrusted to him by Father Jean Claude Colin, the Marist founder, Peter Julian asked permission to write a eucharistic rule.   Father Colin answered that this was not the charism of the Society of Mary.   Nevertheless, the idea for such a rule had already been written in the mind and heart of Father Eymard, and, in 1856, he made the painful decision to leave the Marists in the hope of a founding a religious congregation dedicated to the Eucharist. 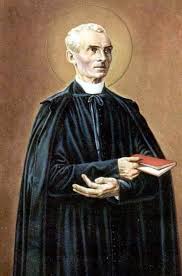 Founding the Congregation of the Blessed Sacrament was not an easy task.   Faithfully following the Holy Spirit’s inspiration brought Father Eymard relational conflicts, situations of personal embarrassment, financial troubles and physical exhaustion.   The first hurdle was getting approval for the new eucharistic institute.

The work of preparation for First Communion, especially among adults, was the aspect of Eymard’s vision that interested Archbishop Marie Dominique Auguste Sibour of Paris when the two met and the priest shared his project.   Eucharistic communities and organisations were springing up throughout France―many of them emphasising only prayer and reparation―but Archbishop Sibour rightly perceived that Eymard’s intuition into the Eucharist was not limited merely to adoration but to reaching out to those who were estranged from the church and evangelising them.   He gave approval on May 13, 1856.

Father Eymard immediately directed his ministry to the young workers, the “rag pickers” and the other barely employable men who made up a large segment of the labour force of Paris.   No sooner did he attract a few men to join him than he had to close the house and move to another location.   This happened twice within the span of a few years.   At times, the Eymardian communities were so poor that a neighbouring convent of sisters fed the priests and brothers.   Not being able to provide food and shelter did not help Father Eymard attract vocations! 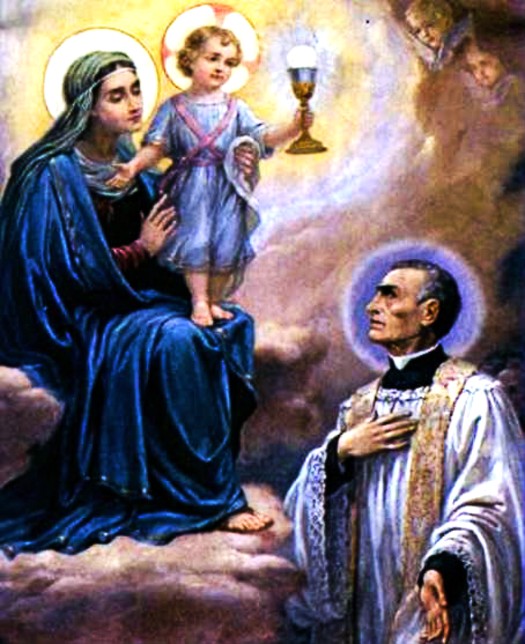 As early as 1845―and perhaps owing to the grace of his experience at Saint Paul’s in Lyons on Corpus Christi―Father Eymard began to move away from a spirituality of reparation to a spirituality which emphasised the love of Christ.   In 1865, just three years prior to his death, he made a long retreat in Rome.   During this retreat, he was struck by the overwhelming realisation of Christ’s love for him, a love which he felt was taking over his entire life.   In response, he wished to make the “gift of self:”  of his will, his personality and his affections, to God and to Christ in the Eucharist.

In 1858, together with Marguerite Guillot, he founded the Servants of the Blessed Sacrament, a contemplative congregation for women.   He is quoted as saying, “You take communion to become holy, not because you already are.”

Eymard was a friend and contemporary of Saints Peter Chanel, Marcellin Champagnat, and Blessed Basil Moreau.

He died at the age of fifty-seven in La Mure on 1 August 1868, of complications from a stroke.
He was declared venerable in 1908, beatified by Pope Pius XI on 12 July 1925 and canonised by Pope John XXIII on 9 December 1962.   St Pope John Paul II named Eymard “Apostle of the Eucharist.”