There does not seem to be a great deal of information about Our Lady of Paris; it is an ancient title and can be traced well back before the 12th Century, when the Cathedral of Notre Dame de Paris (Our Lady of Paris) was begun. Some authorities say that veneration of the Blessed Virgin in Paris can be traced to the first apostles of the city. Since Saint Paul was in Gaul (France) during his travels, it may be assumed that this veneration dates to the first century of the Christian era. And, if Mary was venerated in Paris at that early date, it is possible that she was, even then, known as Our Lady of Paris. Briefly, as long as Christian minds can remember, Paris was consecrated to the Virgin Mary, whom the inhabitants always venerated.
It is known that Our Lady of Paris was a Church first built by King Childebert in the year 522. About the year 1257, the King, Saint Louis IX assisted in the construction of a larger Church carried on in the same place, on the foundations which King Philip Augustus had laid in the year 1191. The older Church built by King Childebert, which had been dedicated to the Blessed Virgin, had became too ruinous to be repaired, so Maurice, Bishop of Paris, decided to rebuild it and, at the same time, adorn Paris with a Cathedral that would outshine all those which had hitherto been built anywhere.

Plans were drawn up during the reign of King Louis VII and work had actually begun on Notre Dame de Paris, Notre Dame Cathedral, in 1162. The cornerstone was laid in the presence of Pope Alexander III. Notre Dame is a huge Gothic Cathedral on the Ile de la Cite, with beautiful flying buttresses to support the tremendous height of the walls and are adorned with stylish gargoyles. It is home to a reliquary which contains Christ’s Crown of Thorns. By the beginning of the fourteenth century, perhaps 1345, the Cathedral was finished, virtually as it stands today. Sometime during the building of the Cathedral, a statue of Our Lady was fashioned and installed in place.
As was typical, the Cathedral was desecrated during the French Revolution and many of the religious artifacts were lost to future generations, although the incredible stained glass windows were not destroyed, including the three spectacular “rose window” that can still be seen today.

A smoke detector first alerted building staff to a fire beneath the roof at 6:18 pm on 15 April 2019, f Notre-Dame de Paris. By the time it was extinguished, the building’s spire collapsed and most of its roof had been destroyed and its upper walls severely damaged. Extensive damage to the interior was prevented by its stone vaulted ceiling, which largely contained the burning roof as it collapsed.

Many works of art and religious relics were moved to safety early in the emergency but others suffered some smoke damage and some exterior art was damaged or destroyed. The Cathedral’s altar, two pipe organs, and its three 13th-century rose windows suffered little to no damage.

Three emergency workers were injured. French President, Emmanuel Macron, said that the Cathedral would be restored by 2024 and launched a fundraising campaign which brought in pledges of over €1 billion as of 22 April 2019. A complete restoration could require twenty years or more.
On 25 December 2019, the Cathedral did not host ChristmasMass for the first time since 1803.

St Onesimus the Slave
St Quinidius of Vaison
St Sigfrid of Sweden (Died 11th Century) Apostle of Sweden
About St Sigfrid:
https://anastpaul.com/2020/02/15/saint-of-the-day-15-february-saint-sigfrid-of-sweden-died-11th-century-apostle-of-sweden/
St Severus of Abruzzi
St Walfrid
—
Martyrs of Antioch: 5 saints
A group of Christians murdered together. We know the names of five of them – Agapev, Baralo, Isicio, Joseph and Zosimus.


St Onesimus the Slave
St Quinidius of Vaison
St Sigfrid of Sweden (Died 11th Century) Apostle of Sweden
St Severus of Abruzzi
St Walfrid
—
Martyrs of Antioch:  5 saints
A group of Christians murdered together. We know the names of five of them – Agapev, Baralo, Isicio, Joseph and Zosimus.

“Without Prayer nothing good is done.
God’s works are done with our hands joined
and on our knees.
Even when we run,
we must remain spiritually
kneeling before Him.” 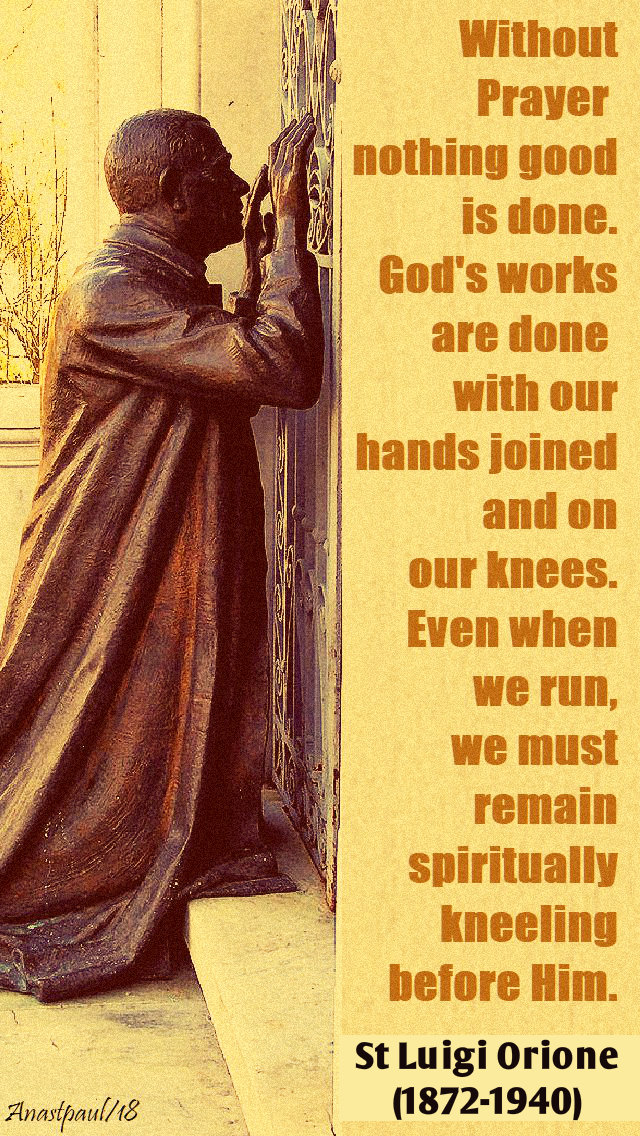 Father of the Church

“Your prayer is a conversation with God.
When you read, it is God who is speaking,
when you pray, it is with God that you are speaking.”

“All that one says to the Saviour is prayer
and when the mind cannot apply itself,
to the effort of true prayer,
a few simple words to Him become one.
It is needful always to think of Him,
even if it is only by the thought
that one is thinking less of Him –
one must be always thinking of Him
and then bit by bit,
He draws one back entirely to Him,
He is so good!”

“When we pray,
let it be our whole being
that turns towards God –
our thoughts,
our heart…
The Lord will be moved
to incline towards us
and come to our help…”

“Prayer is necessary to receive the help of God,
as grain is needed to harvest … a humble and trustful prayer,
for what is necessary for salvation,
is never lost.
It is heard at least by the fact,
that it begs for the grace,
to abide in prayer.”

(Extract from Divine Mercy in My Soul, Diary of St Maria Faustina Kowalska, 163)
This prayer was used by Pope Francis for the Year of Mercy 2015 to be universally prayed by the Church.

St Onesimus the Slave
St Quinidius of Vaison
St Severus of Abruzzi
St Walfrid
—
Martyrs of Antioch: 5 saints
A group of Christians murdered together. We know the names of five of them – Agapev, Baralo, Isicio, Joseph and Zosimus.