REFLECTION – “Beloved brethren, quench your thirst at the waters of that divine spring we want to tell you about, quench it but don’t extinguish it, drink but don’t become satisfied.   The living spring, the source of life calls us and says:  “Let anyone who thirsts come to me and drink” (Jn 7:37).   Understand what it is you are drinking.   Let the prophet tell you and let the source itself tell you:  “Listen to the word of the Lord, they have forsaken me the source of living water” (Jer 2:13).   So the Lord our God Himself, Jesus Christ, is He who is that source of life and that is why He invites us, to come to Him so that we might drink Him.   Whoever loves Him, drinks Him, whoever feeds on the Word of God, drinks Him. …   Drink, therefore, from this source that others have forsaken.

That we might eat of this bread and drink from this spring (…) He refers to Himself as “the living bread that gives life to the world” (cf. Jn 6:51) which we are to eat. …  See from where this spring flows! see from where this bread comes down!   For one and the same Person is both Bread and Spring, the Only-begotten Son, our God, Christ the Lord, for whom we should ceaselessly hunger.

It is our love that gives Him as food to us, our desire that makes us eat Him and when we have been satisfied, we desire Him still.   Let us go to Him as to a fountain and drink of Him in our overflowing love, let us drink Him always with ever-new desire, finding our joy in the sweetness of His love.   The Lord is gentle and good.   We eat and drink Him without ceasing to hunger and thirst for Him, for we cannot exhaust this food and drink. We eat of this bread yet do not run out of it, we drink at this spring yet it does not run dry.   This bread is eternal, this stream flows without end.” … St Columbanus (563-615) – Spiritual instructions 12, 2, 3

PRAYER – Almighty God, You sent Your Son and we have now come to know the grace of His Resurrection.   Through Him we live and move and have our being. As we follow Him, He walks with us and leads us to You.   Grant we pray, that His mother and ours, may guide our way to Him and may the prayers of St Peregrine, who followed closely behind the Lord, be a solace in our trials.   Through Christ our Lord, with the Holy Spirit, God now and forever, amen. 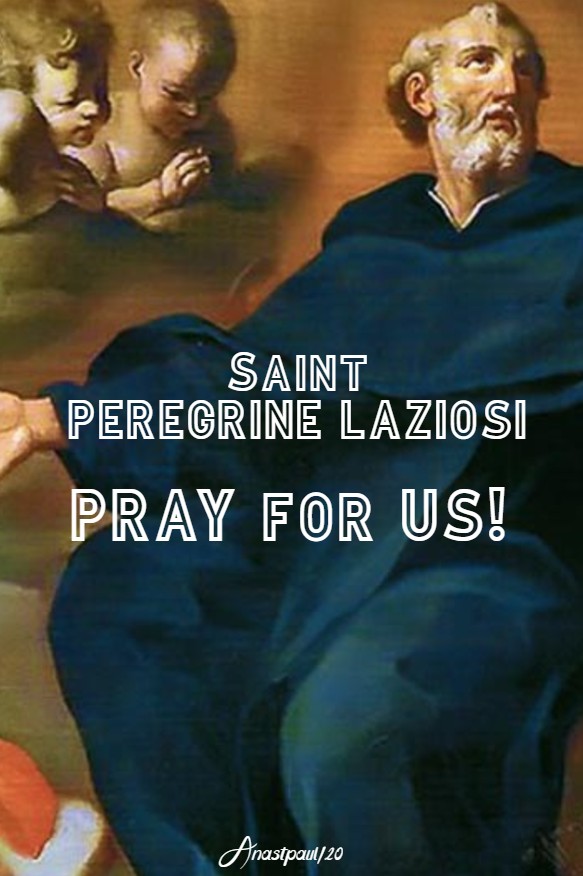 Saint of the Day – 1 May – Saint Peregrine Laziosi OSM (1260-1345) known as the “Angel of Good Counsel,” Priest of the Servite Order (The Order of Servants of Mary ), Apostle of the poor and the sick, miracle-worker, spiritual advisor – born in 1260 at Forli, Italy and died on 1 May 1345 at Forli, Italy of natural causes, aged 85.  Today is the 675th anniversary of his death.   Patronages – against cancer, against breast cancer, against open sores, against skin diseases, AIDS patients, cancer patients, sick people, Diocese of Forli-Bertinoro, Italy, City of Forli, Italy.   St Peregrine’s body is Incorrupt.

Peregrine Laziosi was born in Forli, Italy, the only son of well-to-do parents.   In his teens he joined the enemies of the Pope in his hometown and soon became a ringleader of rebels.

Pope Martin IV had placed Forli under a spiritual interdict which closed churches in the city, hoping to bring its citizens to their senses.   That failing, he sent St Philip Benizi, of the Order of Servites (Servants of Mary), as his personal Ambassador to try to bring peace to the angry rebels.

No welcome mat was spread for the Papal Delegate.   While addressing crowds of malcontents one day, he was dragged off the rostrum, beaten with clubs and pelted with rocks.   Peregrine knocked him down with a vicious blow to the face.   Moments after, stricken with remorse, the youth cast himself at the feet of the bruised and bleeding Priest and asked for his forgiveness, which was granted with a smile.

Peregrine became a staunch champion of Philip Benizi.   He heeded Philip’s suggestion and often prayed in Our Lady’s chapel in the Cathedral.   While kneeling there, he had a vision of the Blessed Mother holding in her hands a black habit like the one the Servites wore.   “Go to Siena,” Mary told the astonished Peregrine. “There you will find devout men who call themselves my servants.   Attach yourself to them.”

The Servites gave him a warm welcome  . He was clothed ceremoniously in the religious habit by Philip Benizi himself.

Daily he sought to become a more fervent religious man.   To atone for past misdeeds he treated himself harshly and worked hard for the poor and afflicted.   One of the special penances he imposed on himself was to stand whenever it was not necessary to sit. When tired he would support himself on a choir stall.

After being Ordained a Priest, he was sent back to Forlì, where he founded a new Servite house there and became well known for his preaching and holiness as well as his devotion to the sick and poor.   He miraculously multiplied grain and wine during a severe shortage in his area.   People took to calling him the “Angel of Good Counsel,” so grateful were they for his wise advice so freely given.

At the age of 60, he developed an infection in his right leg.   It was so painful that he finally agreed with the surgeon who wanted to amputate.   The night before the scheduled surgery, Peregrine spent hours in prayer before a fresco of the Crucifixion in the chapter room.   Then he fell into a deep trance-like sleep and seemed to see Christ descend from the Cross and touch his leg.   The thrill of it woke him up.   In the dim moonlight he saw that his leg, carefully bandaged a few hours earlier, was completely healed.

The following day, the doctor arrived to perform the amputation and finding no sign of the cancer, news spread of the miraculous cure throughout the town.   This only increased the regard Forlineses’ for Peregrine.   When they were sick they appealed to his prayers.   Some were cured when he whispered “Jesus” into their ears.   The Church has since appointed him Patron of persons with cancer, or any incurable disease.

Peregrine died on 1 May 1345 of a fever, aged 85.   An extraordinary number of people from the town and countryside honoured his death.   Some of the sick who came to his funeral, were healed immediately, through his intercession.

His body rests in the Servite church of Forlì, the Basilica of Saint Pellegrino Laziosi.   Pope Paul V declared him Blessed in 1609 and Pope Benedict XIII Canonised him in 1726.

The lesson of Peregrine’s life is not that God worked a miracle but that a faithful servant placed himself, unconditionally, in the hands of God.   Peregrine’s trust in God, therefore, serves as a model for those dealing with sickness.   Thousands of clients especially those who have been cured by his intercession, pay him special honour today, his Feast, each year.

Prayer to St Peregrine
for his Intercession

St Peregrine, we come to you confidently
to implore your aid with God in our necessity.
You were converted instantly from a worldly life
by the good example of one holy person.
You were cured instantaneously of cancer by God’s grace
and your unceasing prayer.
In your gracious kindness,
please ask the Lord to heal us also in body, mind and soul.
May we then imitate you in doing His work
with renewed vigour and strength.
Amen 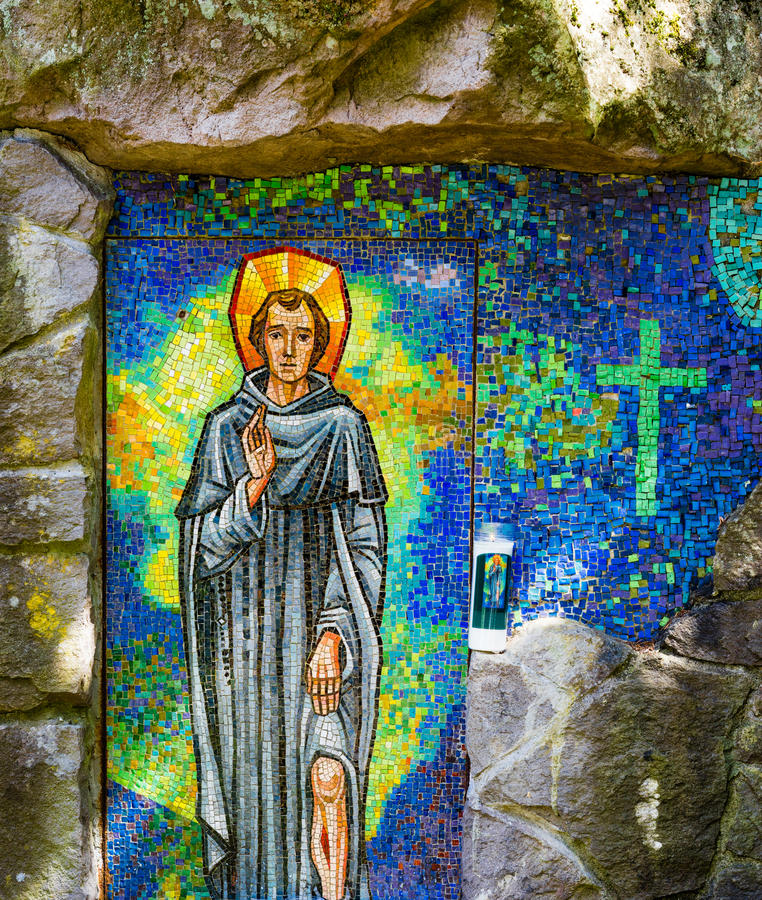