There is not one who does not love something but the question is, what to love.   The psalms do not tell us not to love but to choose the object of our love.   But how can we choose unless we are first chosen?   We cannot love unless someone has loved us first. Listen to the apostle John:  We love him, because he first loved us.   The source of man’s love for God can only be found in the fact that God loved him first.   He has given us Himself as the object of our love and He has also given us its source.   What this source is you may learn more clearly from the apostle Paul who tells us:  The love of God has been poured into our hearts.   This love is not something we generate ourselves;  it comes to us through the Holy Spirit who has been given to us.

Since we have such an assurance, then, let us love God with the love He has given us.   As John tells us more fully:  God is love and whoever dwells in love dwells in God and God in him.   It is not enough to say:  Love is from God.   Which of us would dare to pronounce the words of Scripture:  God is love?   He alone could say it who knew what it was to have God dwelling within him.   God offers us a short route to the possession of Himself.   He cries out:  Love me and you will have me for you would be unable to love me if you did not possess me already.

My dear brothers and sons, fruit of the true faith and holy seed of heaven, all you who have been born again in Christ and whose life is from above, listen to me, or rather, listen to the Holy Spirit saying through me:   Sing to the Lord a new song.   Look, you tell me, I am singing.   Yes indeed, you are singing, you are singing clearly, I can hear you. But make sure that your life does not contradict your words.   Sing with your voices, your hearts, your lips and your lives:   Sing to the Lord a new song’.

Now it is your unquestioned desire to sing of Him whom you love but you ask me how to sing His praises.   You have heard the words:  Sing to the Lord a new song and you wish to know what praises to sing.   The answer is:   His praise is in the assembly of the saints – it is in the singers themselves.   If you desire to praise Him, then live what you express.   Live good lives and you yourselves will be His praise. 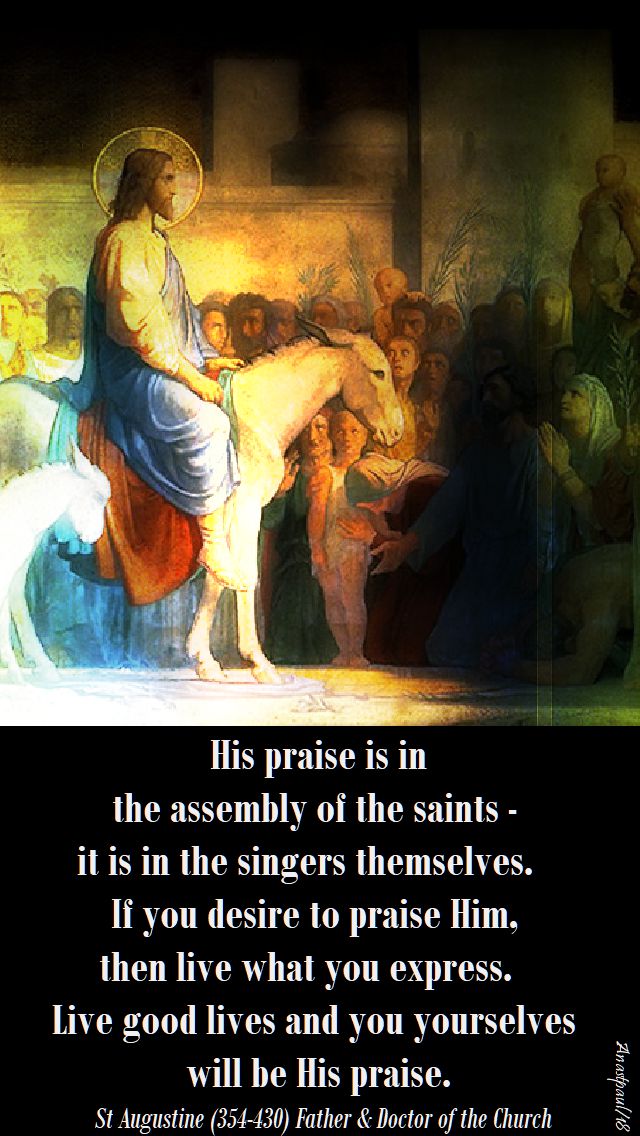 To You, O Jesus,
do I turn as my true and last end.
You are the river of life
which alone can satisfy my thirst.
Without You all else is barren and void.
Without all else, You alone are enough for me.
You are the Redeemer of those that are lost;
the sweet consoler of the sorrowful;
the Crown of Glory for the victors;
the recompense of the Blessed.
One day I hope to receive of Your fullness
and to sing the song of praise in my true home.
Give me only on earth some few drops of consolation
and I will patiently wait Your coming,
that I may enter into the Joy of my Lord.
Hosanna!
Amen. 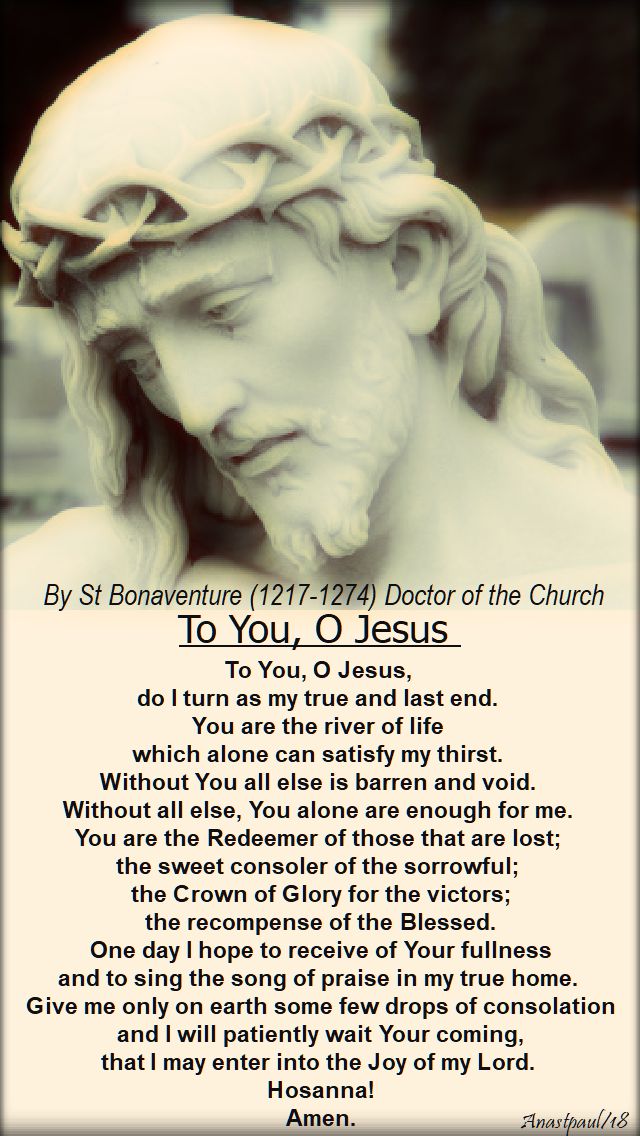 Today we commemorate Christ’s entry into Jerusalem for the completion of the Paschal Mystery.   In the old calendar before Vatican II, the Church celebrated Passion Sunday two Sundays before Easter and then Palm Sunday was the beginning of Holy Week.   The Church has combined the two to reinforce the solemnity of Holy Week. 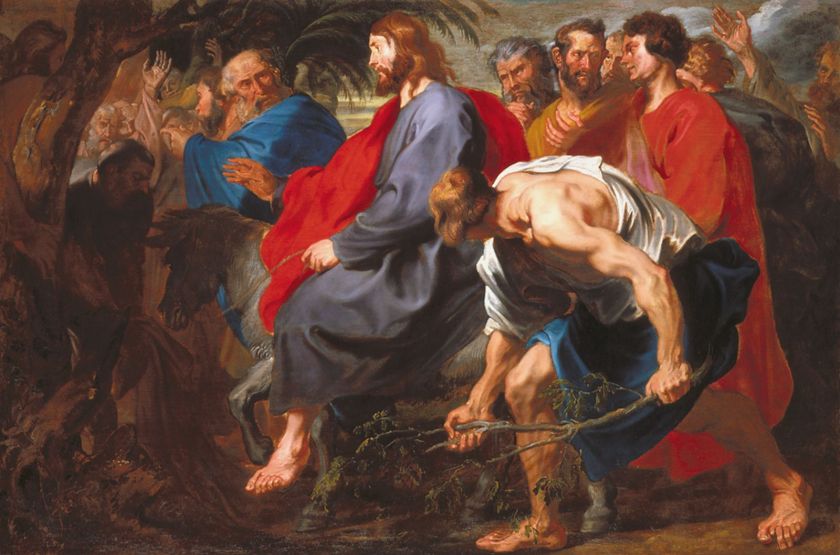 The Palm Sunday procession is formed of Christians who, in the “fullness of faith,” make their own the gesture of the Jews and endow it with its full significance.   Following the Jews’ example we proclaim Christ as a Victor… Hosanna to the Son of David!   Blessed is He who comes in the Name of the Lord.   But by our faith we know, as they did not, all that His triumph stands for.   He is the Messiah, the Son of David and the Son of God.   He is the sign of contradiction, acclaimed by some and reviled by others.   Sent into this world to wrest us from sin and the power of Satan, He underwent His Passion, the punishment for our sins but issues forth triumphant from the tomb, the victor over death, making our peace with God and taking us with Him into the kingdom of His Father in heaven. 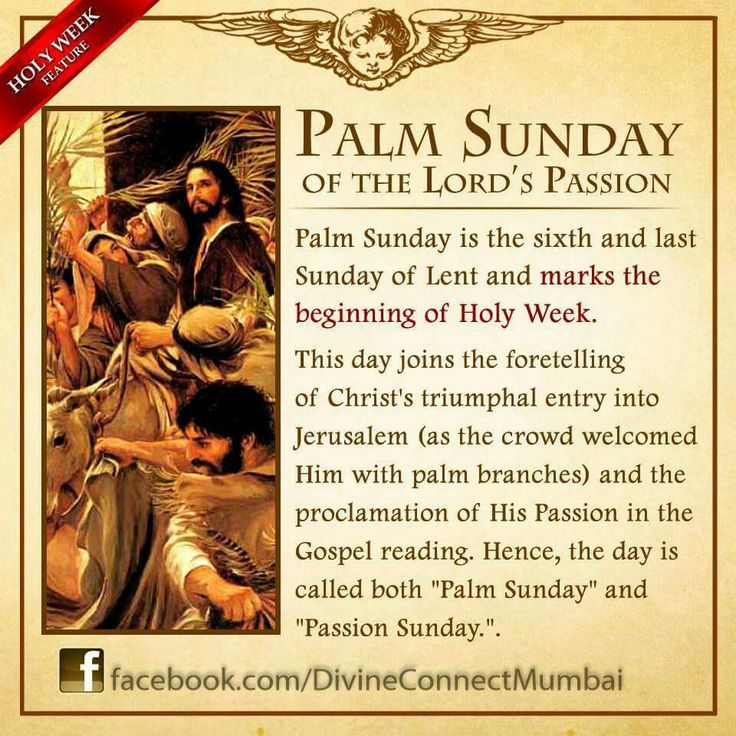 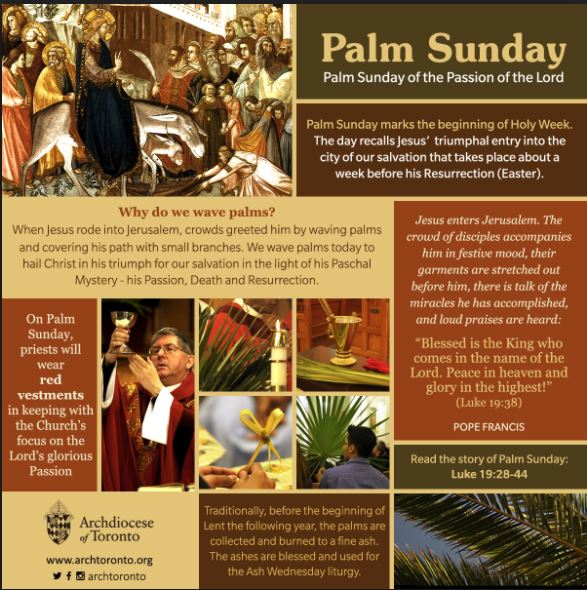 Palm Sunday marks the entry of Jesus into Jerusalem.   But he entered in humility, not in pomp and power.   To humble ourselves and make our souls the garments that we spread before him, this is the greeting he desires says St Andrew of Crete (650-740), one of the Early Church Fathers – his Memorial is 4 July.

Let us go together to meet Christ on the Mount of Olives.   Today he returns from Bethany and proceeds of his own free will toward his holy and blessed passion, to consummate the mystery of our salvation.   He who came down from heaven to raise us from the depths of sin, to raise us with himself, we are told in Scripture, above every sovereignty, authority and power and every other name that can be named, now comes of his own free will to make his journey to Jerusalem.   He comes without pomp or ostentation.   As the psalmist says:   He will not dispute or raise his voice to make it heard in the streets. He will be meek and humble, and he will make his entry in simplicity.

Let us run to accompany him as he hastens toward his passion and imitate those who met him then, not by covering his path with garments, olive branches or palms, but by doing all we can to prostrate ourselves before him by being humble and by trying to live as he would wish.   Then we shall be able to receive the Word at His coming and God, whom no limits can contain, will be within us.

In His humility Christ entered the dark regions of our fallen world and He is glad that He became so humble for our sake, glad that He came and lived among us and shared in our nature in order to raise us up again to Himself.   And even though we are told that He has now ascended above the highest heavens – the proof, surely, of His power and godhead – His love for man will never rest until He has raised our earthbound nature from glory to glory and made it one with his own in heaven.

So let us spread before His feet, not garments or soulless olive branches, which delight the eye for a few hours and then wither but ourselves, clothed in His grace, or rather, clothed completely in Him.   We who have been baptised into Christ must ourselves be the garments that we spread before Him.   Now that the crimson stains of our sins have been washed away in the saving waters of baptism and we have become white as pure wool, let us present the conqueror of death, not with mere branches of palms but with the real rewards of His victory.   Let our souls take the place of the welcoming branches as we join today in the children’s holy song: Blessed is he who comes in the name of the Lord. Blessed is the king of Israel.

This Lenten or Holy Week reading on the entry of Jesus into Jerusalem in humility is an excerpt from a Palm Sunday sermon (Oratio 9 in ramos palmarum: PG 97, 990-994) by Andrew of Crete, a bishop and Early Church Father who died in 740 AD.   It is used in the Roman Catholic Office of Readings for Palm Sunday with the accompanying biblical reading of Hebrews 10:1-18. 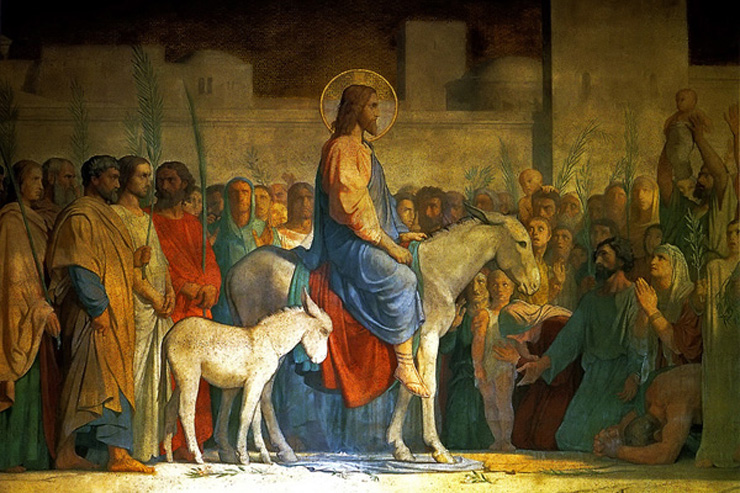 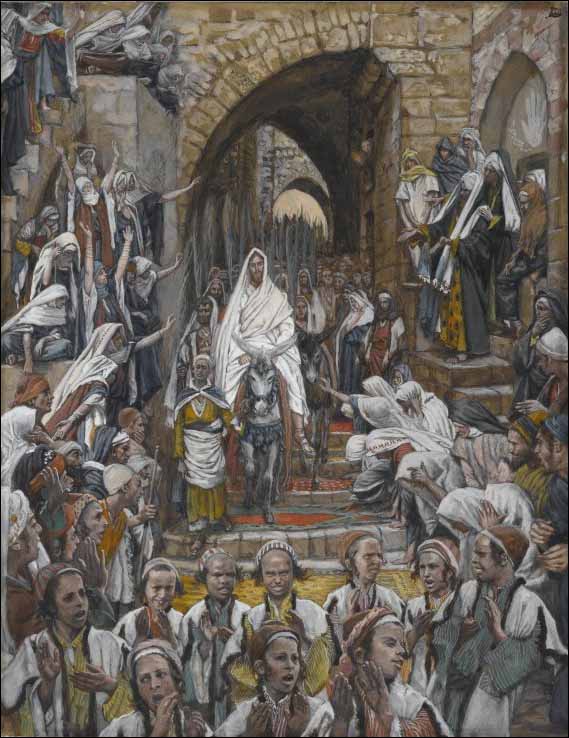 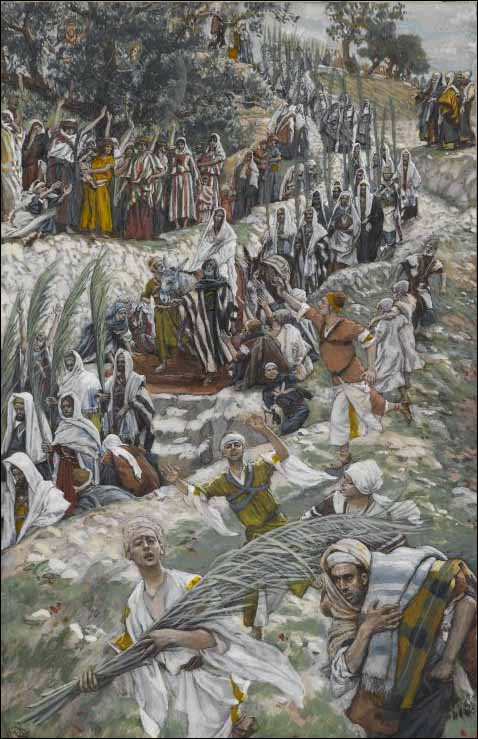 St Andrew of Crete
St Andrew of Crete (c. 660-740) was born around 660 AD in Damascus and eventually entered monastic life at Mar Saba.   He later served at the Church of the Holy Sepulchre in Jerusalem and was ordained a deacon at the great cathedral of Constantinople and mother Church of Eastern Christendom, Hagia Sophia, around 685.   Always exhibiting great pastoral solicitude for orphans, widows, and the aged, Saint Andrew spent his last days as Archbishop of Gortyna on Crete, a position to which he was elevated in 692. Attrbuted by many with the invention of the canon as a style of religious writing, his works display not only great rhetorical skill but an incomparable depth of theological understanding.   He is considered one of the great spiritual writers on the theme of repentance and his Great Canon, prayed during Lent in the Eastern Churches of Byzantine tradition, stands as a great testimony to man’s repentant cry to God, our merciful Father.  Saint Andrew of Crete is numbered among those great Christian writers known as the Early Church Fathers or “Fathers of the Church.” 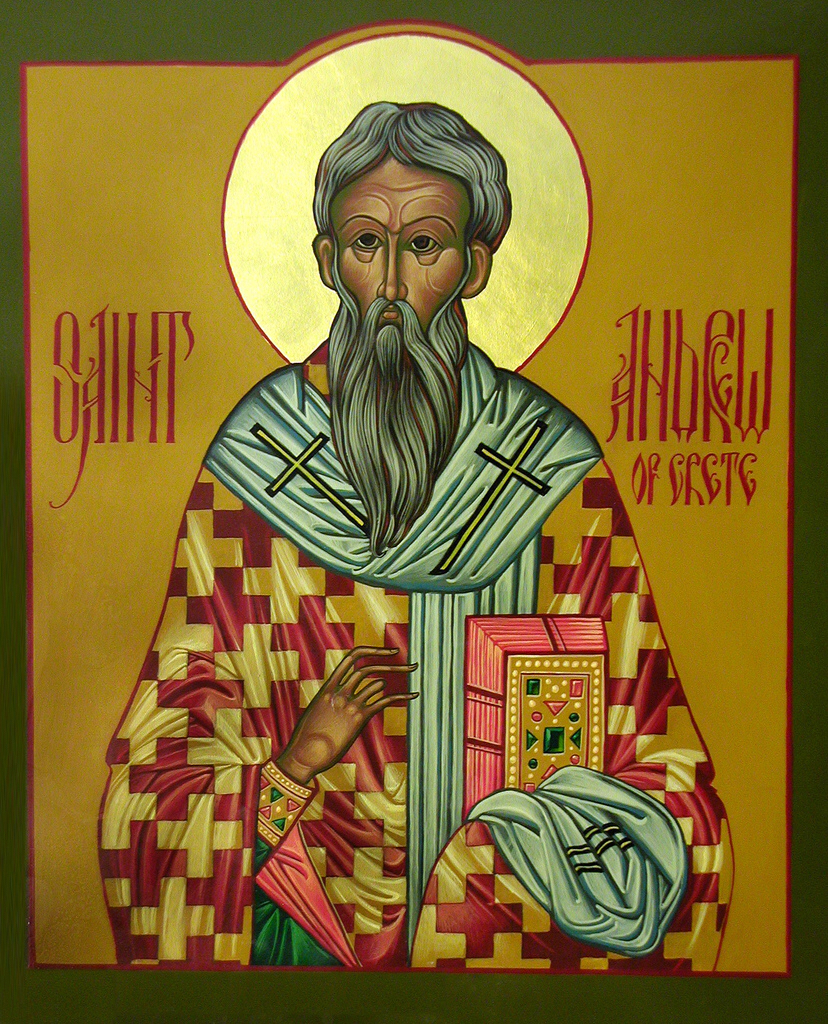 Annunciation of the Blessed Virgin Mary (Solemnity): The Annunciation to the Blessed Virgin Mary by Gabriel the Archangel that she was to be the Mother of God (Luke 1), the Word being made flesh through the power of the Holy Spirit.   The feast probably originated about the time of the Council of Ephesus, c 431 and is first mentioned in the Sacramentary of Pope Gelasius (died 496).   The Annunciation is represented in art by many masters, among them Fra Angelico, Hubert Van Eyck, Jan Van Eyck, Philippe de Champaigne (1 and 2 below), Ghirlandajo, Holbein the Elder, Lippi, Pinturicchio, Titian (2nd last below), Tintoretto (last below) and Del Sarto. 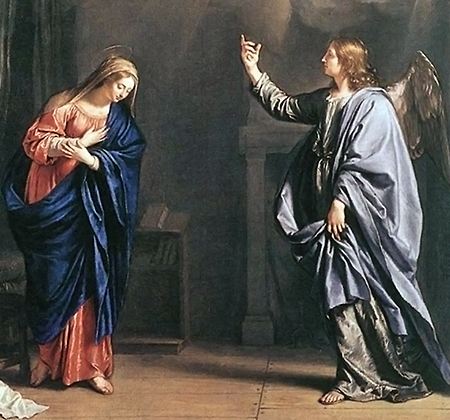 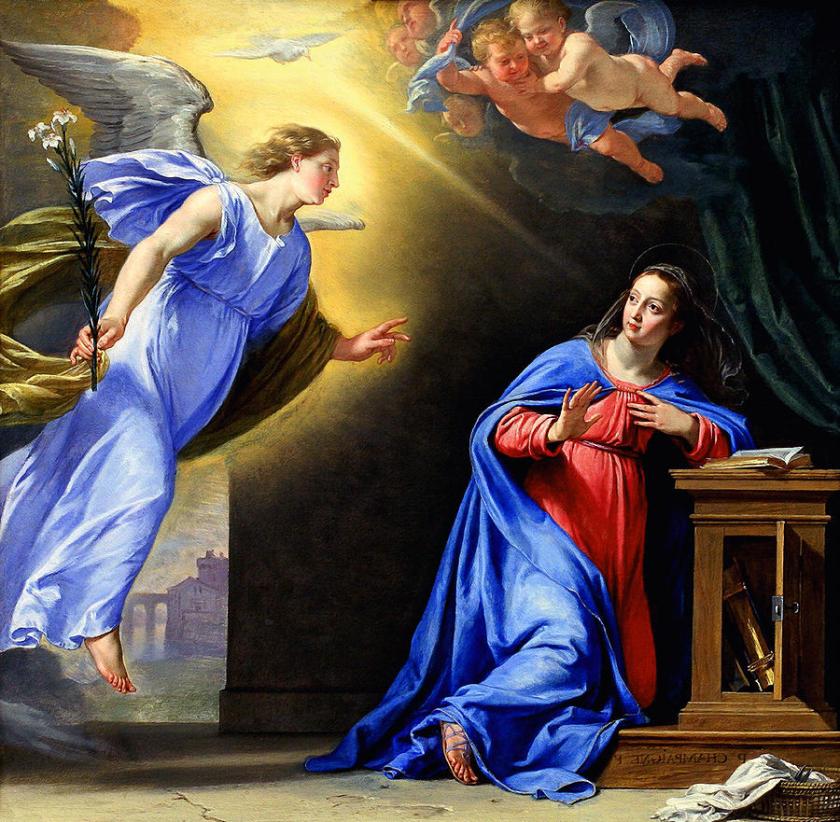 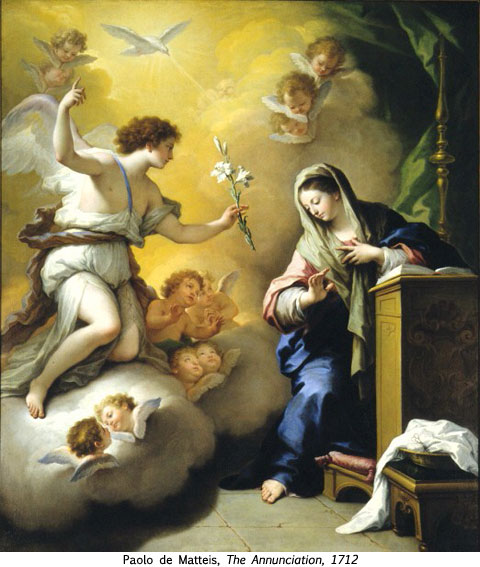 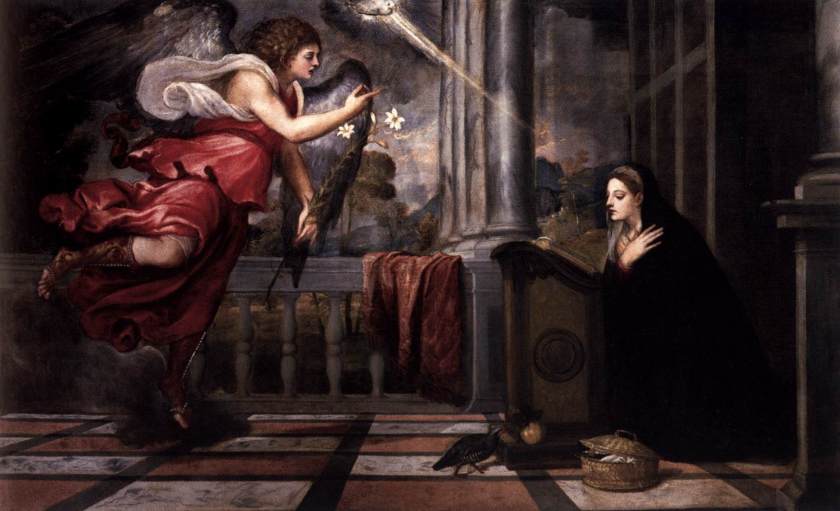 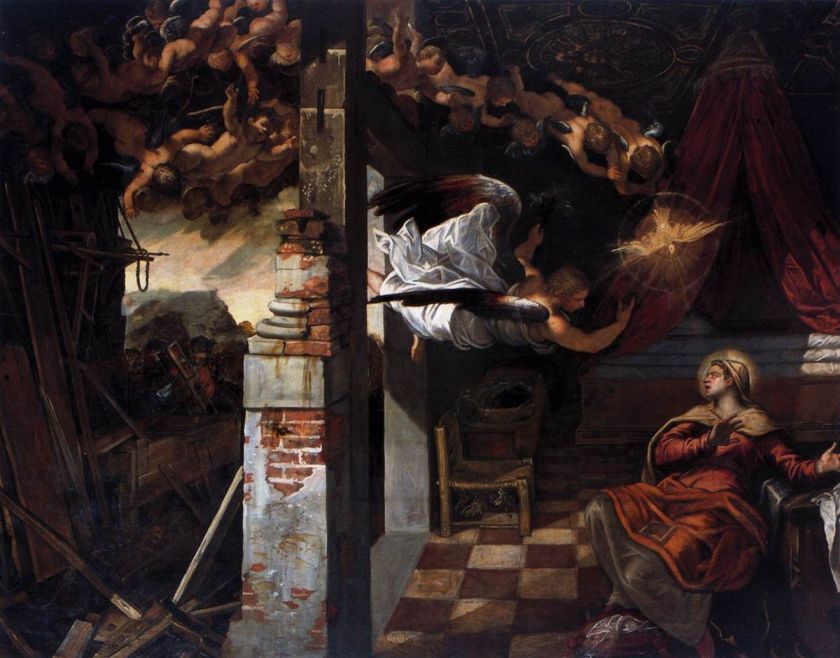 Our Lady of Betania:   Actually the name Betania means Bethany in Spanish. It was originally given this name by Maria Esperanza and was the site of their farm, in Venezuela.   Apparitions of the Blessed Virgin Mary were reported and eventually a small chapel was built here and the faithful began to gather, especially on Feast Days but throughout the year.