A quarter century before St Junípero Serra began his California adventure, there was an extraordinary Franciscan carrying out a great work of evangelisation across Central America, Mexico and finally, Texas.   In his zeal to spread the Catholic faith, he faced inclement weather, hostile animals, forest insects and reptiles, lack of food and water and cruel treatment from hostile Indian tribes.

The life of Fr Antonio Margil of Jesus is an epic story of a man who seems larger than life. Barefoot, carrying only a staff, breviary and the materials he needed to say Mass, he established hundreds of missions in a territory extending from the jungles of Costa Rica to east Texas and the borders of Louisiana.   Countless Indians of Costa Rica, Nicaragua, Guatemala, Mexico and Texas received the divine gift of faith from him and revered him a saint.   For this, he is called the Apostle of New Spain and Texas.

In 1697, Fr Margil was recalled to Querétaro as superior, or presidente, of the Franciscan College of the Holy Cross, and a new phase of his life began as an administrator.   When he reached the College, Fr Margil took off the ragged habit he had worn and mended for 14 years, patching it at times with bark from a certain tree called the mastastes and exchanged it for a new one, thus avoiding the least shadow of singularity.

As superior, he never dispensed himself from any public act or expected anything but what he himself practised.   To maintain accuracy and the decorum of ritual, he imposed upon his religious the obligation of holding a conference once a week on the ceremonies of the Holy Sacrifice of the Mass.   The friar who loved “Lady Poverty” exhorted his brethren and the faithful to ornament the altars and churches as much as they could, so they might be worthy of the divine majesty of God.

For Our Lord, there was nothing too rich or decorous.   For himself, it was a different story.   With the exception of Sunday, he fasted every day, taking a few herbs, a piece of bread and some water or watered down chocolate once a day.   He permitted himself sleep only from 8 to 11 every evening.   He was wakened then by the brother porter and together they read a chapter from The Mystical City of God by María de Agreda.   After praying the Divine Office at midnight, he made the Stations and would remain in prayer until the hour of Prime, absorbed in God.

The barefoot friar who walked on water in his extraordinary missionary work was a man of deep humility.   More than once he was tortured, beaten, or left for dead. His name, which deserves to be known and his fame spread is Venerable Antonio Margil of Jesus, who titled himself and signed his letters as El Nada Mismo – Nothingness Itself.

“Do not forget your nothingness, no matter what others may do to you.   Do not fear, so long as you live, Antonio, any demon greater than that called ‘I.’”

Let us Pray that Venerable Antonio that he may soon be raised to the altars of the most high!

Prayer for the Intercession of Venerable Antonio

O Lord Jesus Christ,
Your apostle Antonio Margil of Jesus,
left his homeland to bring
the Gospel of Salvation to the people
of Mexico and the United States.
He endured every hardship
and pain for love of You.
May You graciously deign
to reward Your servant Antonio
by hastening the day
when he will be raised
to the honour of Blessed and Saint.

We ask that Venerable Antonio Margil
intercede for us before God
by answering this request.
………………………………. (make your request)
Through Christ Our Lord,
Amen

Venerable Antonio Margil of Jesus, Pray for Us! 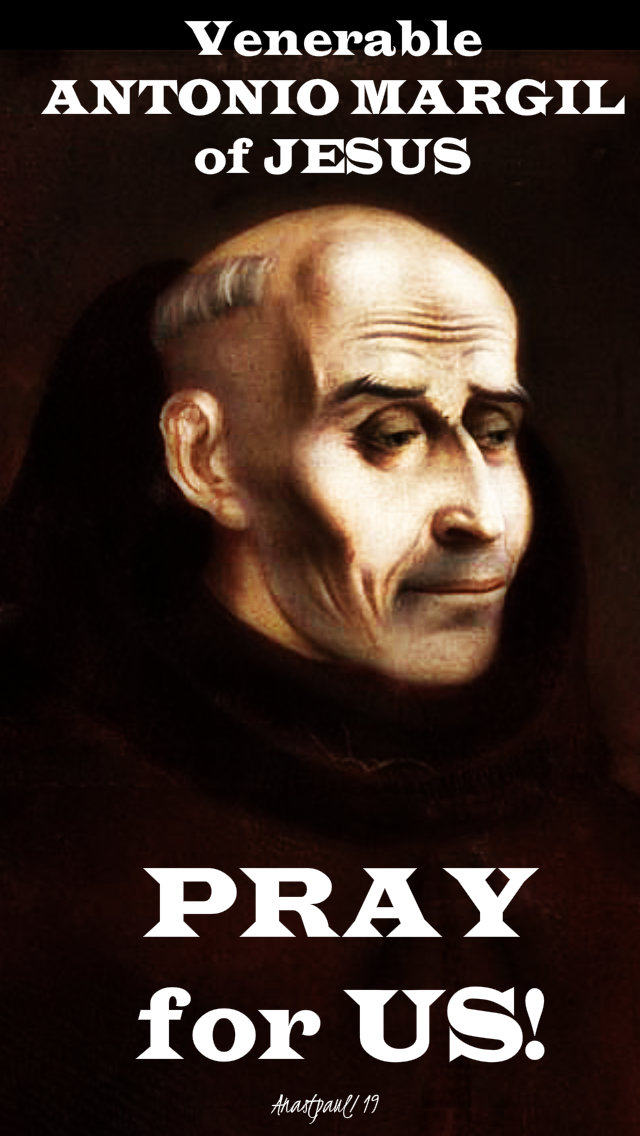